A few days ago, I went to check out the Setouchi International Art Festival‘s website and I was gladly surprised to see that it got a makeover.

The first and not least important change is the new title. It’s simply called Art Setouchi now. It makes sense after all, the Festival has ended more than 5 months ago and the next one won’t be until 2013. This name is not exactly new it already was the Festival’s “nickname” last year. It is somewhat “cute” with its Engrish feel (shouldn’t it be Setouchi Art?) but it also has a proper noun feel, it’s unique, it’s not just Art in the Seto area, it’s a concept in itself, it’s Art Setouchi!

Because this is the good news, pretty much all of the art that had stayed open after the end of the Festival will stay open until the end of June at least. I suspect much longer and I want to believe that the whole area will become what Naoshima is today: an island haven for art.

I have no inside information about whether these pieces will stay permanently, those are just assumptions from my part, but seeing the evolution of the website, I may not be wrong.

Following what I had done at the end of the Festival, I’m going to give you here the opening schedule for the artworks that are open in April, and I hope to be able to do it every month from now on (at least until June, and maybe more). 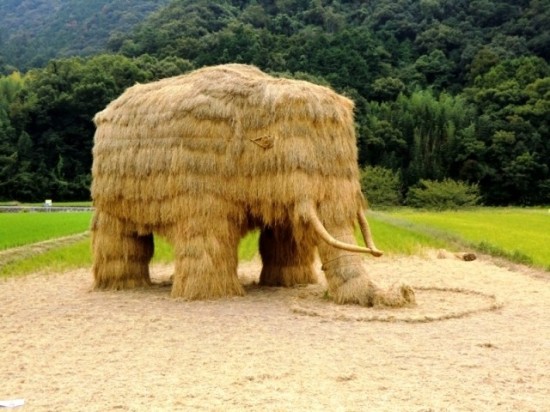 In memoriam : Straw Art, unfortunately doesn't exist anymore, but I guess it was part of its very nature to be temporary.

Please note that during Golden Week, which starts on April 29th this year, all art exhibits will be open everyday, except on Oshima.

Hopefully, this will convince you to go visit the area if you haven’t done so yet.

previousHelp a Takamatsu NGO Help the People of Miyagi
nextNew on Teshima: Your First Colour