Yes, today’s artwork from the Setouchi International Art Festival has a German title! It is called Was du liebst, bringt dich auch zum weinen, which basically means: “Everything you love makes you cry” (Thanks to Thias for correcting my previously bad translation)

As you will have already guessed, it was created by a German artist, Tobias Rehberger, who is apparently quite famous. The piece is located on Teshima, in the village of Ieura.

If you go one day to Teshima (a thing I warmly advise you to do), you will most likely arrive at Ieura first, as this is the port where most boats and ferries coming from Takamatsu, Naoshima and Okayama arrive. And you will most likely see Was du liebst, bringt dich auch zum weinen as -if I’m not wrong- it’s set to be permanent and it is located by the port.

One small detail though, while it’s quite big for a piece of art, you may not notice it if you don’t look closely, as not only it is located inside a café-restaurant, but it actually is the café-restaurant itself!

At first, it won’t look any different from any other building in the neighborhood. However, if you look through the windows, you will notice something funky. And if you enter the building, you will enter to this: 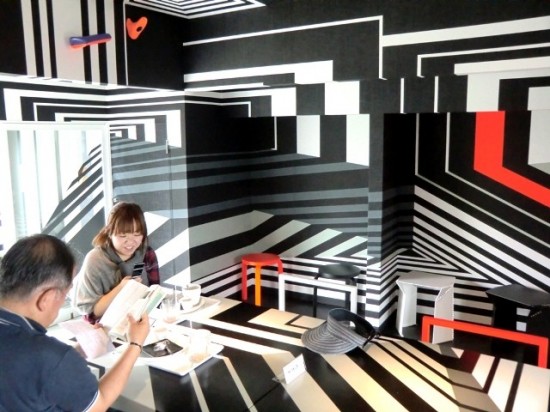 Actually, once inside, it doesn’t hurt your eyes as much as the pictures imply, although I’d suggest people subject to vertigo to be extra careful, especially when they’ll climb the stairs.

As it’s a café and a restaurant, inside, you can of course eat and drink various things, but as I didn’t try any of them, I can’t really do any sort of review or critique. 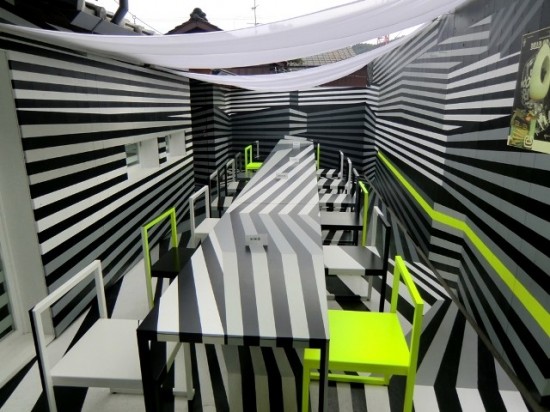 This artwork is interesting, very interesting, I want to say original, but… About 15 years ago, I almost started doing some contemporary art – it lasted two weeks. The thing is that I didn’t actually wanted to become a contemporary artist, I just wanted to make a point to somebody. Strangely, the three artworks that I designed (but never actually did) during those two weeks strangely looked like Was du liebst, bringt dich auch zum weinen, as those were various objects covered with more or less parallel black and white lines with red details here and there.

But that is not my problem with this piece, that is just an odd coincidence. What actually bothers me is that this artwork is not original at all, as during the 2009 Venice Biennale, Tobias Rehberger basically built almost the same work, with the same name (inside a cafeteria that time). Apparently he even won a prize for it!

Actually, he’s not the only one who was guilty of that at the Setouchi International Art Festival. I’m think about a Danish artist that won’t be named (I decided not to talk about him on this blog because of that)  who did exactly the very same artwork that he did about fifteen years ago somewhere else, a piece that must ready in just a few hours max. Shame on him!

At least, Rehberger, even if he didn’t create anything new, put some serious work in remodeling entirely the restaurant. Yes my take on this, is that if you’re not being original, at least you’d better put some work into your thing. 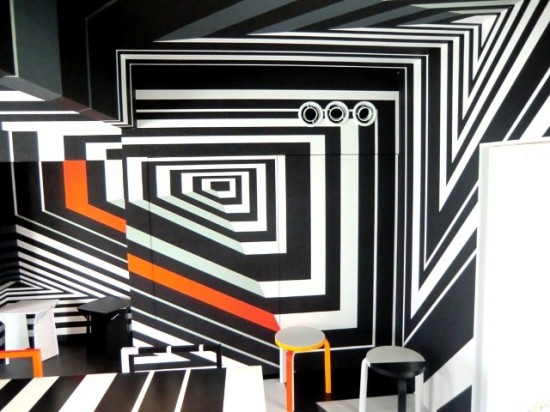 Was du liebst, bring dich auch zum weinen is open Wednesdays to Sundays, 10 am to 5 pm.
Price of admission if ¥300, except for people that come to eat or drink, in this case the entrance is free (not the food and drinks, of course) 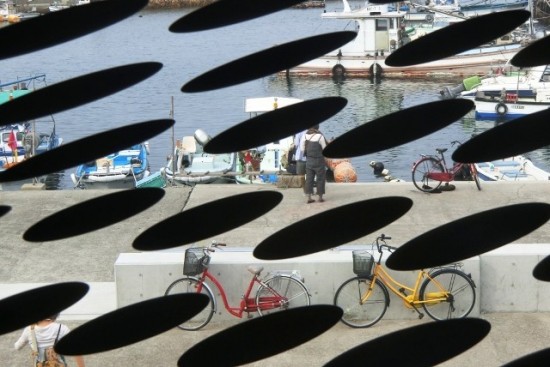 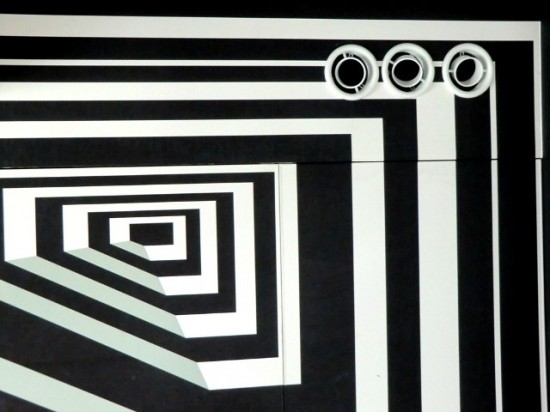 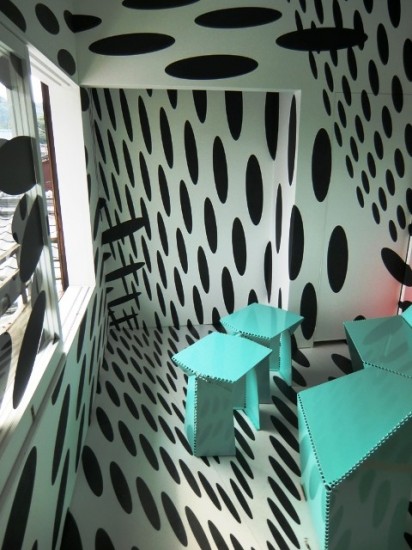