The “Empty Seat on the Train next to the Gaijin” Syndrome…

Lately there has been a lot of talk on the blogosphere (at least the English-speaking one talking about Japan) about something called “micro-aggressions” (by the infamous Debito). I’m also currently reading Baye McNeil‘s book about racism, Japan and racism in Japan. In that book, he devotes a full section to the whole “empty seat” phenomenon.

Before going any further, if I don’t give more details about those “micro-aggression” things and the book, it’s because I’ve been planning posts on both those topics. I’ve been postponing the micro-aggression thing because of lack of time (if you want to know the short of it, I think it’s laughable, and while I was not a big fan of Debito before, now I really think he’s a clown – no, I even refuse to link to him, just google him). I’ll write a review of the book as soon as I’m finished (I’m not because of lack of time too), but so far I think it’s OK.

So onto, the empty seat next to the Gaijin thing. Apparently, the perfect example of racism, micro-aggression in Japan is the infamous empty seat on the train. That is that even on crowded trains in Japan, nobody will dare to seat next to the foreigner, even if it’s the only empty seat left in the car.

This statement always both amused and perplexed me, and I never had the occasion to experience it as when I take the train, it usually tends to look like this.

However, this afternoon, I got to take that train at a very unusual (for me) hour, and it was almost full. I managed to find an empty seat though, one that happened to have enough room for two, possibly three people (note that I didn’t take the closest seat available, as it was much narrower; I wonder what the person I was about to sit next to thought about my sudden change of mind concerning not wanting to sit next to them after all).

And a few minutes later, it happened! An old lady got on the train, saw the empty space, started to walk towards it, spotted me and moved to another empty seat further away.

Yes, my first gut reaction was negative towards her, I admit…

However, hadn’t I just done the very same thing a couple of minutes earlier? I too, decided to go to a seat that’s further away because it was more convenient for me.

And thinking about it, an old lady being a little scared of a strange looking guy (yes, whether I like it or not I am strange looking in Japan, this is what foreigners are, in almost every country, not just Japan), what’s so strange about it?

Still, no matter the circumstances, I just experienced the “empty seat on the train next to the gaijin” syndrome.

And my first thought after that was to actually use this train trip to “study” it. How many people would avoid sitting next to me?

Well, that old lady was the only one, as the train became less and less crowded station after station (ironically the old lady got off at the same station as I do).

So I guess my study is a bit inconclusive, isn’t it?

Yet, this story is not completely over as tonight, returning home on the same train (and this time it almost looked like the way I’m used to it, just a bit more crowded), a middle-aged woman got on the train and sat almost right next to me although there were many empty seats in the car (there were less than 10 people in it).

So, what should we make of this? 😉 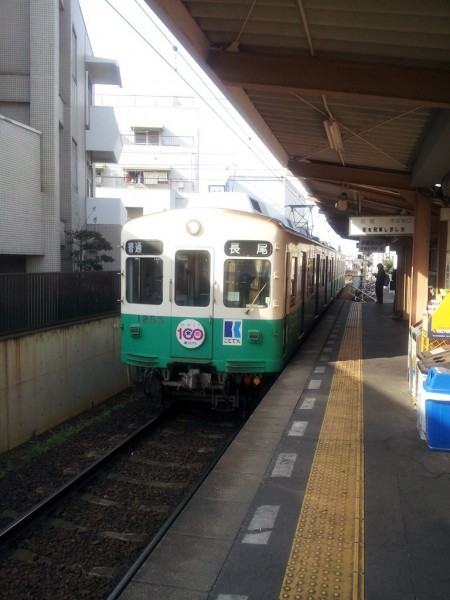 Kotoden’s Green Line, where it all happened!