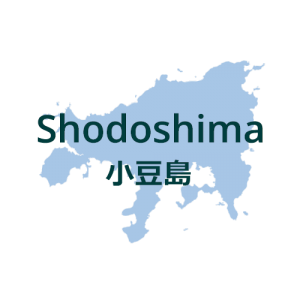 Shodoshima is a bit unique among the islands taking part in the Setouchi Triennale. Sure, every island is unique, but if only because of its size Shodoshima feels a little different. It definitely is a little world in itself, with actual towns and more. While it’s mainly famous for being the first and one of the few places where olives can grow in Japan, its economy mostly revolves around the production of soy sauce (some breweries produce some of the best in the country), somen, and tourism (while still relatively unknown overseas, the island has certain notoriety with Japanese tourists because of its amazing landscapes and… well, olives… while they’re somewhat irrelevant in terms of local cuisine, they do attract Japanese tourists always in search of a new edible novelty). However, it is also affected by depopulation, just like the other islands, and its most remote areas (the northern coast, the inner valleys, Mito Peninsula in the south) are seeing their population dropping drastically, just like the rest of the region. So the Setouchi Triennale is needed there too, and thanks to its size, Shodoshima is the island that hosts the largest number of artworks for the art festival.

There are many ferries going to and from Shodoshima.

From Takamatsu, you can easily access two ports: Tonosho (the island’s main port) in the west of the island and Ikeda in the south.
You can also reach Tonosho from Uno Port or Teshima, as well as Shin-Okayama Port and – during the Setouchi Triennale only – Inujima.
You can also arrive on the eastern side of the island from Kobe (Sakate port) or Himeji (Fukuda port) or in the north in Obe port from Hinase in Okayama prefecture.

In other words, you have a lot of choices, even though coming from Takamatsu is probably the easiest and most obvious choice. Also keep in mind that you can arrive in one port and leave from another one, which gives you more leeway when planning your day.

Getting around the island

For better or worse, a car is the best way to get around Shodoshima, especially if you want to see a lot of the art. It is spread out all around the island and various art sites are usually a few kilometers from each other. However, know that bringing a car on the ferry is not cheap, and renting one on the island is a cheaper option if you only spend one day on the island. If you spend more time, bringing your car on the ferry will be cheaper.

If you like riding a bicycle and are quite athletic, it could be the best option though. Shodoshima’s landscapes are stunning, and a bicycle remains the best way to enjoy them, but you’ll need to be in good shape, you will face some steep slopes from time to time. However, the south part of the island is flat(ter) and you can rent electric bikes in Ikeda or Kusakabe ports, and I warmly advise you to do so. Note that you can rent a bike in one port, and leave it in another one.

There are buses that allow access to all the art sites, but know that besides the main road (along the south coast between Tonosho and Sakate) where they’re quite frequent, you will have to plan carefully. If you’re in a remote part of the island and miss the bus, the next one could be a few hours later. There is usually a day bus pass during the Setouchi Triennale.

Finally, Shodoshima is quite popular with local bikers (the one with motor kind), and driving on the semi-mountainous roads of the island must be fun indeed, especially because they have little traffic overall.

Usually, outdoor artworks are free and accessible all the time.

Indoor artworks are open only on Triennale days and usually have a 300 yen entrance fee that is covered by the Triennale Passport.

All art sites are free for children and teenagers age 15 or younger.

Disclaimer: while I try to maintain this page as often as possible, it is possible that some information is inaccurate or out-of-date. As a general reminder, this page is by no means official and is based on my knowledge and experience of the area.

Gift of the Sun

Review: a very consensual public artwork, but a very pleasant one.
⭐⭐⭐ 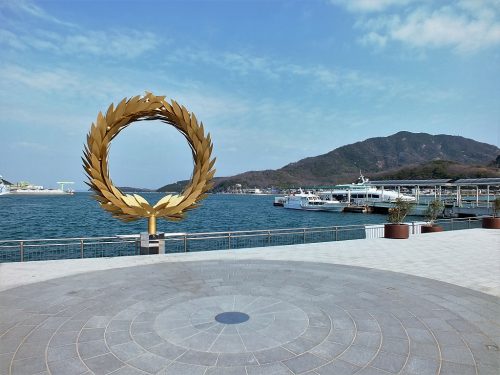 Review: During the Setouchi Triennale 2022, the terminal exhibits one of Junko Koshino’s “art dresses.” I have yet to see it. 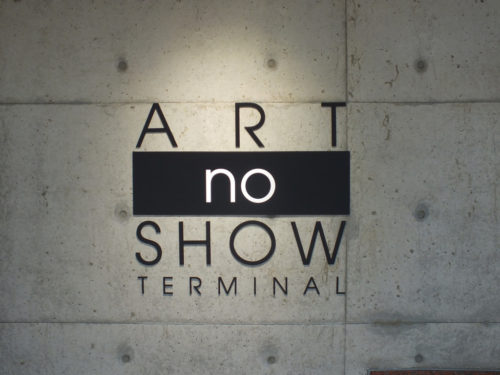 Review: Interesting. The “leaked” metal represents a map of Shodoshima. The artwork suffers from its location, a bit too out of the way in an area with a lot of transit.
⭐⭐⭐ 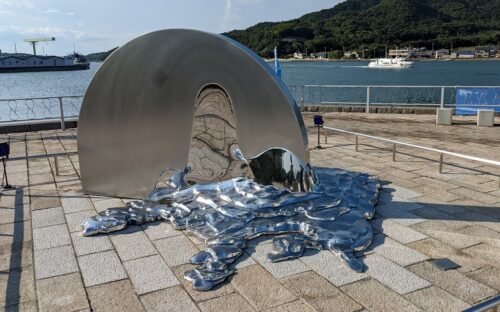 Me (pronounced “meh” affiliated with the Mei Pam Gallery) (2016) 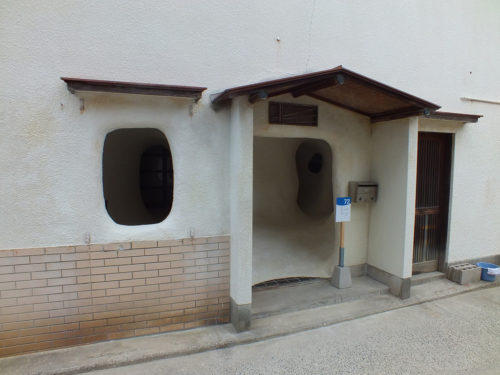 Review: I haven’t seen it yet. I think they’re aluminum trees that look like they’re dancing.

Review: I haven’t seen it yet.

Review: I haven’t seen it yet. From what I understand, it’s simply some chains with “Keep out” signs around places with no special interest. The idea being that the chain and the sign makes gives its interest to the place. I have the feeling this won’t be my cup of tea. 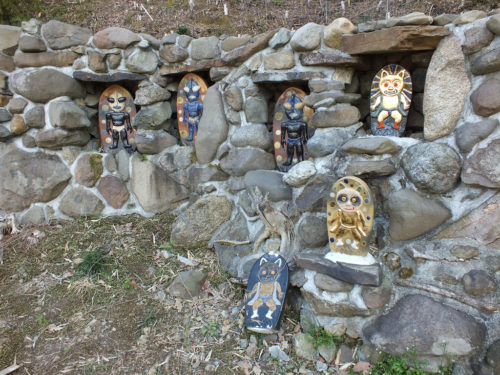 Review: It is Wang Wen-Chih’s new bamboo house. Always amazing, always one of the artworks not to be missed on Shodoshima during the Setouchi Triennale.

Garden of the Border

Review: Pretty pleasant land art installation that looks like some sort of archeological site. Pay close attention to the details on the half-buried torii.
⭐⭐⭐⭐ 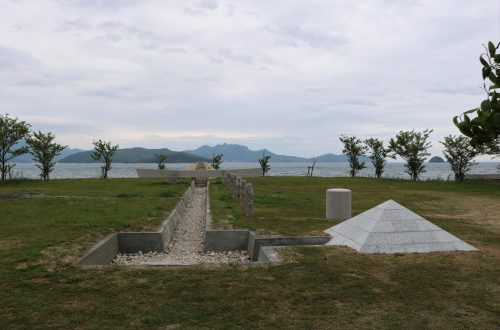 Eyes of Nature (from the Earth) 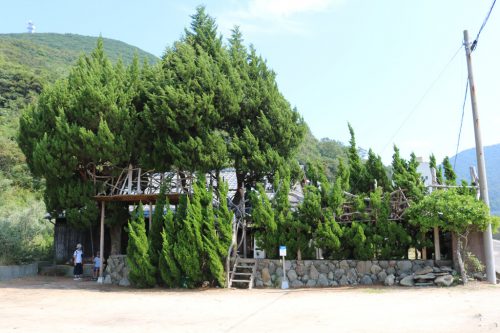 Shiomimi-so (Songs of the Tides)

Review: I really love this building… Is it even a building?… This almost unreal structure whose function is as unreal as its look. I really love when artworks project us into an imaginary world that suddenly becomes tangible.
⭐⭐⭐⭐⭐ 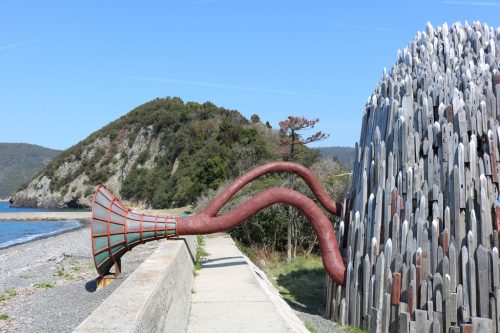 Review: more or less a follow-up to Shiomimi-so. I like the idea and the structure, unfortunately, it doesn’t “work” too great (the echo in the chamber is very strong and one doesn’t hear much of the outside). Still an interesting creation.
⭐⭐⭐ 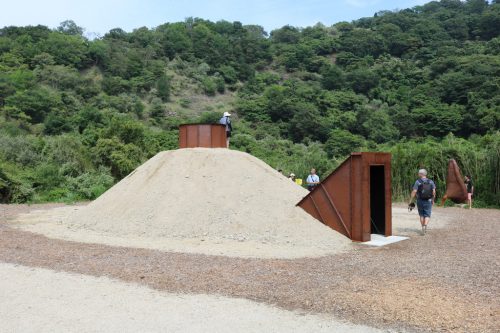 Review: A giant wooden hermit crab has finally found a house that fits and it’s awesome.

Review: A pretty neat giant welcoming you when you arrive at Konoura. 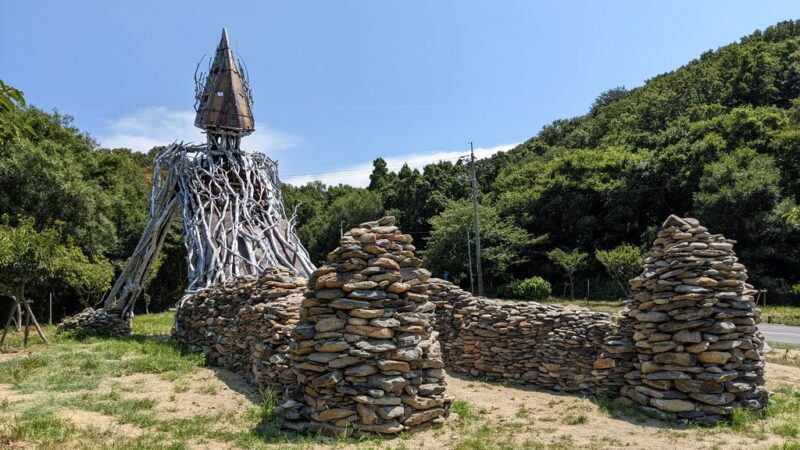 Review: Does it make the bus stop look nicer? Yes, it does. However, while it definitely makes the place nicer looking, I have a hard time seeing this piece as a “Setouchi Triennale” artwork, just some wall decoration, basically.

Story of a Boat

Review: It’s OK, but nothing too amazing.

Review: Keisuke Tanaka reuses the same building as he used in 2019, the “Utopia dungeon” but has installed new wooden sculptures. I liked it much better in 2019, unfortunately.

Review: Maybe I need the opinion of an architect, but I don’t really have an opinion on the building either way. It serves its purpose though.
⭐⭐ 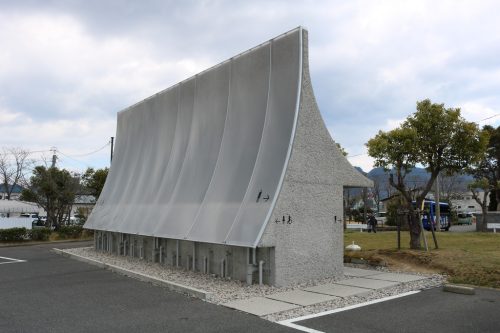 Review: I really love this building that’s a little confusing at first, like a very tiny maze. As it’s a toilet, one may have the feeling that it lacks privacy, but fear not, it’s part of the point I assume, and you’ll be fine.
⭐⭐⭐⭐ 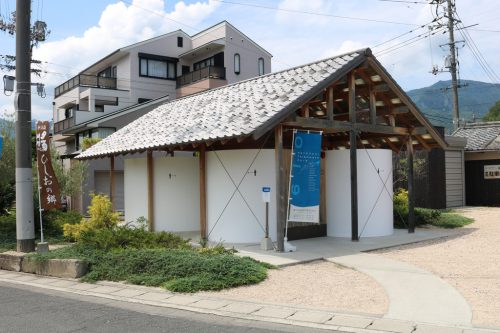 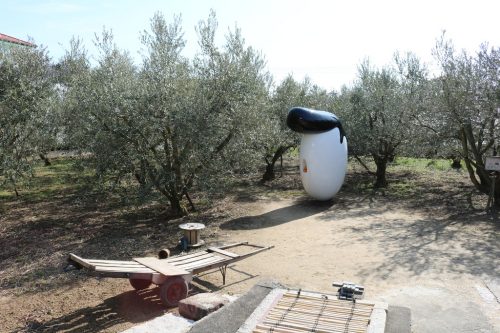 Review: I really love this somewhat utopian space. A place for everyone: a kitchen, a garden and more, for all to use. A place where visitors can rest, meet other visitors or locals. If there were more places like this in the world, it would be a better place, I mean it.
Unfortunately, I must add that if this is what it was in 2013 when it was new, nowadays, locals don’t seem to be using it much and some parts need to be better taken care of. The kitchen is still great, and I make sure to have lunch there almost every time I come to Umaki.
⭐⭐⭐⭐ 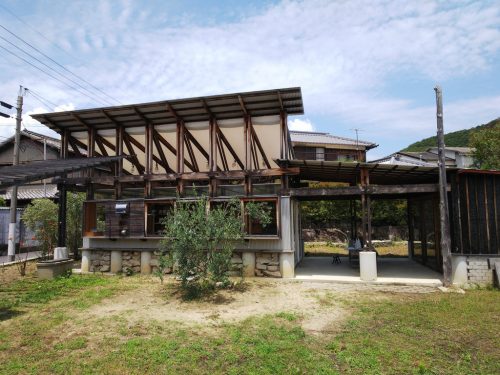 Review: The artworks are quite interesting, even though they almost look better on pictures than for real. I have mixed feelings about the place itself (the gallery and café). It feels like it belongs to a fancy and upscale city, not Umaki that is quite rural. In other words, it really feels out of place.
⭐⭐⭐⭐ 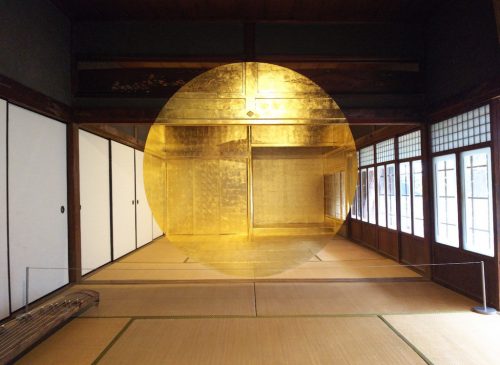 Review: If I understand correctly, the place has been turned into an actual and permanent museum from this year. I’ll tell you more as soon as I’ve seen it.

The Shore where we can reach

Review: When Xiang Yang came to Shodoshima in 2019, his wonderful installation The shore where we can reach was supposed to be the first step of a much larger future project. Well, this is the much larger project and it’s amazing. One of the artworks not to miss this year.
⭐⭐⭐⭐⭐

Review: I’m a fan, both of the statue and Legend of Shodoshima the mural that was painted right next door.
⭐⭐⭐⭐ 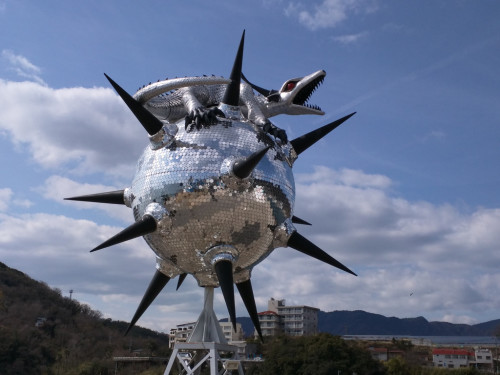 Beat Shrine / Anger from the Bottom 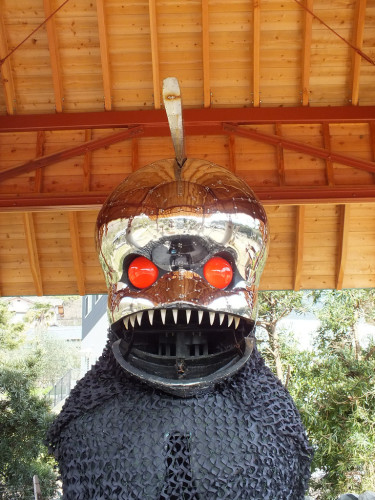 Review: I haven’t seen it yet, and I’m not totally sure what it is about.

Review: I haven’t seen it yet. 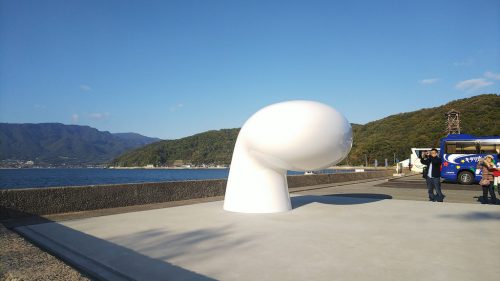 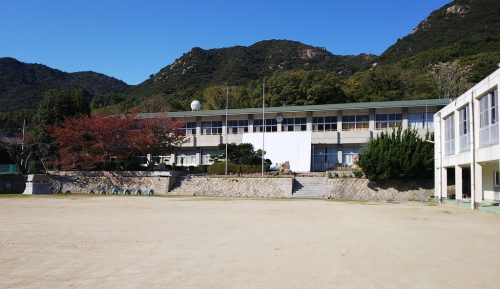 Review: It makes me think of two giant sheets of paper that would have been forgotten there, and now we can hide in between them.
⭐⭐⭐⭐ 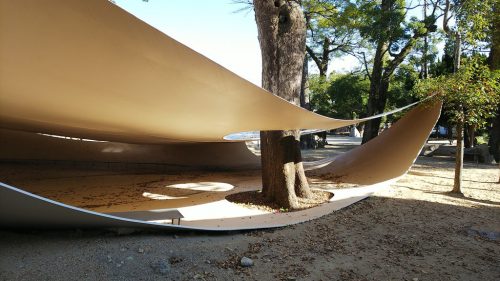 Review: Very interesting. We feel like we’re underground – if the ground was invisible.
⭐⭐⭐⭐ 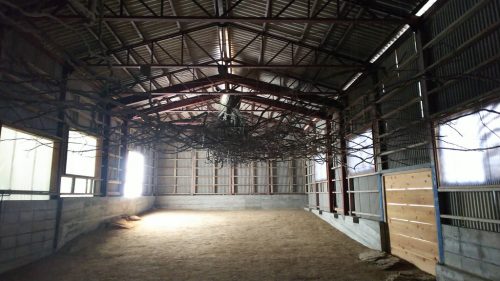 Review: It’s a musical installation with some avant-garde music. I don’t really have a strong opinion about it.
⭐⭐⭐