Shinji Ohmaki’s Liminal Air – core – is certainly the work of art from the Setouchi International Art Festival that has been seen by the most people – even people that didn’t care the least for the Festival – for the simple reason that it is quite big and located in the very middle of the port where almost every single ferry to and from Takamatsu docks to load and unload their passengers.

If I’m correct it will stay there permanently and that, associated to its location, might be the reason that this piece is the type of uncontroversial, nothing special type of work. Artwork that, with time, will fade in the background, a little bit like the other sculptures on the Sunport (or many other public places in the world). 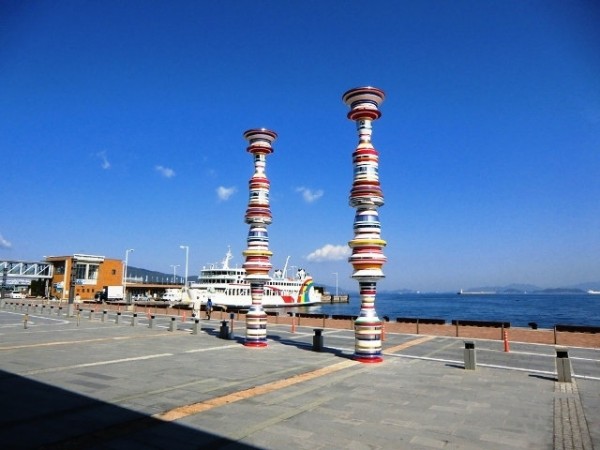 And somehow it is a shame as I think that the Festival’s “central” artwork should be more striking, more noticeable, so that it becomes some sort of landmark. When people arrive in Takamatsu (although I doubt that nowadays many people arrive to Takamatsu for the first time by boat) or leave to go to the neighboring islands, they should be facing something memorable, something that could almost become an icon of the city. Think about Yayoi Kusama’s Red Pumpkin on Naoshima or Ogijima’s Soul.
Concerning Liminal Air –core- one must recognize that, although it’s not exactly unnoticeable, if only because of its size one cannot miss it, it’s not exactly that unforgettable either. 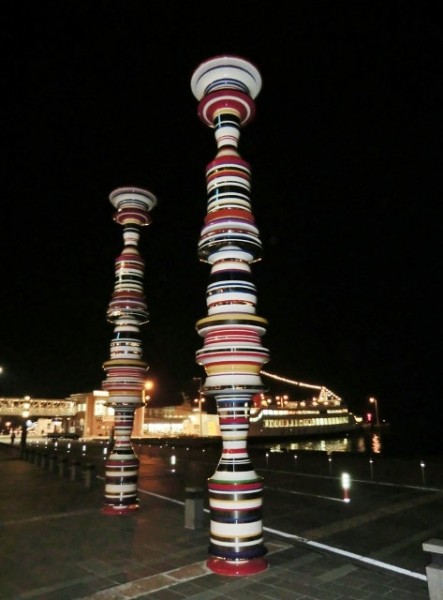 Apart from that, the official guide states that Liminal Air – core- is some sort of entry gate to Takamatsu, and there too, I can’t say that it’s a huge success. Both pillars are much too close to each other to actually serve as a gate and their location doesn’t help; although central on the port, travelers will tend to walk in front or behind them, not through them. 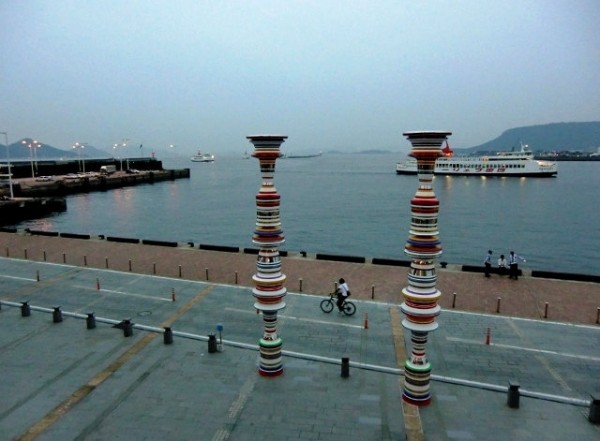 (On this picture, you can see Megijima and Ogijima on the left, Ōshima in the center between both pillars and Yashima on the right. Also, the ferry that is passing by is the Shikoku Ferry that I have recently mentioned)

I will end on a positive note, because despite all the negative comments I’ve just made about this artwork I don’t dislike it either (that’s the advantage of being uncontroversial I guess). The fact that the pillars are painted in various colors mixed with metal color that acts as a mirror, the colors of the artwork, its brightness, its appearance almost, changes depending on the time of the day and the weather. This gives the impression of a multi-faceted living work. And that’s a quite interesting effect. 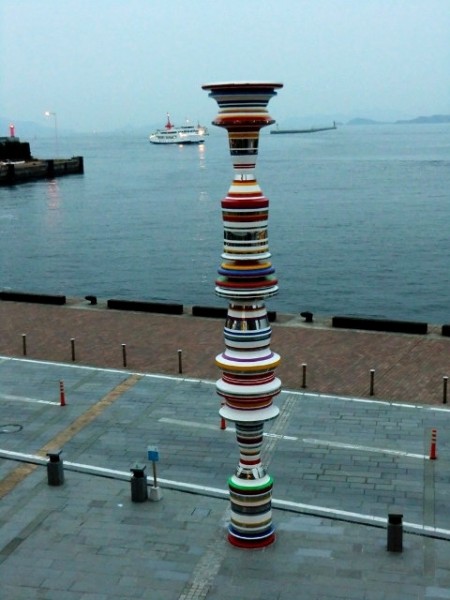