We’re moving away from contemporary art for a few posts, to go back to Japanese traditions a bit. Remember, last October, we were in Japan, not only to attend the Setouchi International Art Festival, but also to learn a bit more about the traditions from the Kagawa Prefecture. We started with bonsais and continued with Wasanbon sugar. Our third and last (at least until our next trip to Kagawa) topic is the Sanuki Kagari Temari (讃岐かがり手まり).

“What is that?” you may be wondering.

To answer this question, let’s start with the meaning of these three terms:

So I guess, you know a little more about them now, but not much more…

Maybe a picture will help? 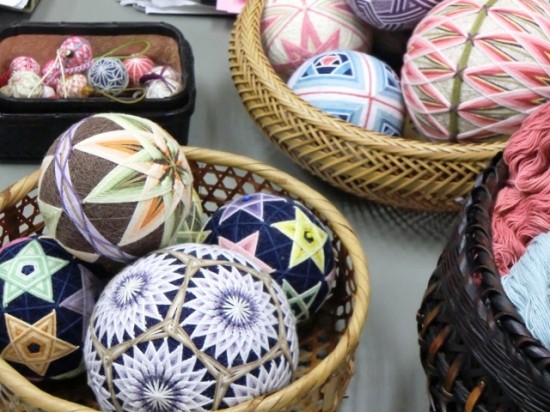 A few words about this history of Temari:

As I told you, Temari came to Japan from China about 500-600 years ago. First, they were reserved to the elites – the aristocracy and the samurais – as they were made from silk and as such unaffordable for the common people. However, during the Edo Period, some people started to make Temari from cotton. And, as you may or may not know, it just so happens that cotton was one of the main natural resources of the Sanuki Province. So, people from the area started to make cotton Temari and the region became one of the main producers in Japan.

First, those Temari were extremely simple in design, they weren’t much more than balls made from cotton threads. Then, little by little, using threads dyed with natural colorants, people started making Temari with more complex designs, giving them looks similar to the silk ones of the nobles. They kept on becoming more and more popular to the point that by the end of the Edo Period, cotton Temari could be found all over Japan.

During the Meiji and Taishō Periods, one can talk about a golden age of the Temari. With the industrialization of cotton mills, Temari became even more common to the point they became an integral part of Japanese culture. There even were songs about them!

But with the continuation of Japan’s modernization, balls made of rubber soon appeared in the country and quickly replaced the Temari that quickly became obsolete as toys. At the beginning of the Shōwa Period, the production of cotton Temari had completely ceased.

After the war, Mr. Kazuo Araki, from the town Kan’Onji, in the Western part of Kagawa, while doing research about people’s every day life in the past, became interested in the now disappeared cotton Temari. So, he started doing research about them and interviewed former manufacturers. With the help of Yaeko, his wife, who was a kimono maker and who also made various traditional decorative objects, they decided to try making cotton Temari, just like in the old days. However, the endeavor proved to be much harder than originally expected as some of the manufacturing techniques and secrets were lost, especially the recipes for the various dyes that used to all be made from local roots, flowers, leaves and other plants.

So, they travelled to various places in Japan were Temari used to be made, especially Matsumoto, to learn about the techniques from those places. They did not only learn how to master those techniques, but they also did a real archivist and historian work about these balls. And after 30 years of learning, researching and practicing, they finally reconstituted the traditional techniques from the Sanuki Province and they succeeded into resuscitating the local Temari that they renamed Sanuki Kagari Temari. 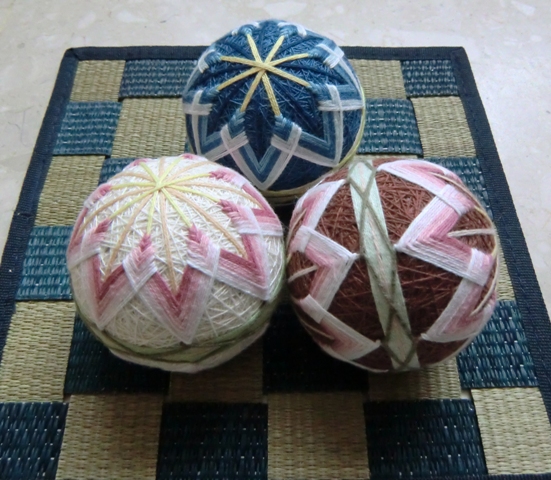 Today, Sanuki Kagari Temari are considered as official Traditional Art Objects (a title that protects them and their techniques if I understood correctly) and the Sanuki Kagari Temari Hozonkai organization is in charge of their protection as well as their promotion. Nowadays, Ms. Eiko Araki, Kazuo & Yaeko Araki’s daughter in law, is at its head. The organization’s mission obviously includes preserving the manufacturing techniques of the Sanuki Kagari Temari, but also to simply make them so that people from Kagawa (as well as the rest of Japan) can rediscover them and learn about them.

A very beautiful initiative in a Japan that’s losing its traditions more and more. 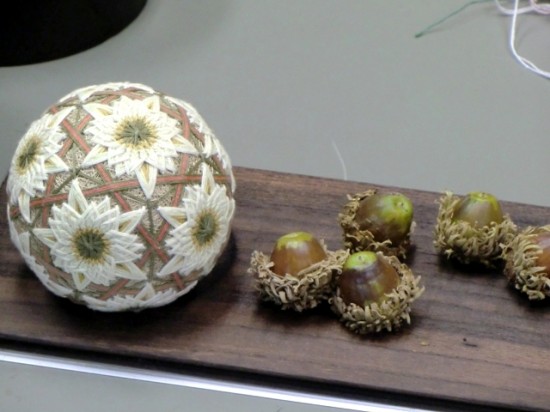 Sources: Big thanks to Sanuki Kagari Temari Hozonkai and to Eiko Araki for welcoming us and giving us those information (that are also on their website if you can read Japanese) as well as 康代 for translating it.