There are foreigners –and even some Japanese people- who think that Honshū is Japan and that Japan is Honshū. There are foreigners who, when they think, consider going or even go to Japan only consider and visit Honshū. Of course, it’s a common phenomenon to reduce a foreign country to its main region or city (and as a non-Parisian French, I know a thing or two about this bad habit when people talk about my country). So for a lot of foreigners, France is Paris, the US is NYC and California, Russia is Moscow and St. Petersburg, the UK is London and so on.

And Japan?
For them, Japan is Tokyo and Honshū…
Sure it’s a common phenomenon but it’s a very sad one in my opinion.

Why this little introduction? Just to remind you that one of the goals of this blog is to show you that Japan is not just Honshū and that lesser known regions such as Shikoku and the Seto Inland Sea can be as interesting, and Honshū is not even a compulsory destination when one goes to Japan! As an example, during this past trip, I spent a grand total of 20 minutes on Honshū and not one more! It was on October 19, 2010 between 5pm and 5.20pm local time, merely a detour on our way back from Naoshima.

And if we spent those 20 minutes on Honshū it was to go see the only piece of art from the Setouchi International Art Festival that was on Honshū, that is Chinu – the Black Sea Bream of Uno (宇野のチヌ) which was located –as the name gives it out- in Uno Port in the city of Tamano, Okayama Prefecture. 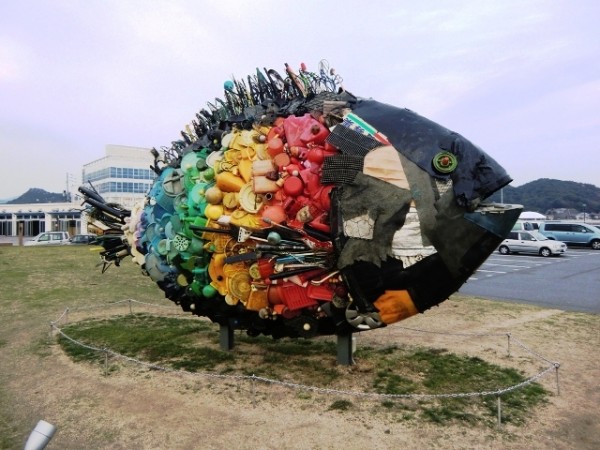 A few words about Uno Port: it was, for a long time (until the opening of the Great Seto Bridge in 1988) the main access gate to Shikoku from Honshū, especially because this was where the Shikoku Ferry and the Utaka-Kokudo Ferry left to go to Takamatsu and those two ferries used to be the main links between the two islands. They still exist (we took the Shikoku Ferry to return to Takamatsu at 5.20pm) but for how long? Nowadays they’re always half empty, whereas, back in the days, I assume that there was a huge line of people in front of them before departure, hoping to embark in time and not have to wait for the next one. Ironically, it takes less time to go from Takamatsu to Okayama (or the other way around) taking the ferry than the Great Bridge of Seto, as one has to make a detour for this. I guess it’s psychological; on the road, one feels more independent and one goes faster, one assumes it takes less time than if one is sitting on a ferry with their car parked. Sure one goes faster, but one needs to make a a big detour too. Not mentioning the fact that the toll for the bridge is more expensive than the fare for the ferry, and even more important, one doesn’t use gas when taking the ferry.

In any case, I assume that it is in memory of that time when Uno Port was “Shikoku’s gate” that art was installed there too.

As you can see, Chinu – the Black Sea Bream of Uno is a big fish, but not any big fish, as it was made entirely from objects found stranded on the shores of the Seto Inland Sea. Making art from trash is definitely an interesting way to clean up a coast, but also to remind people that the sea shouldn’t be a garbage disposal, unless one wants trash to replace fish in it sooner or later. 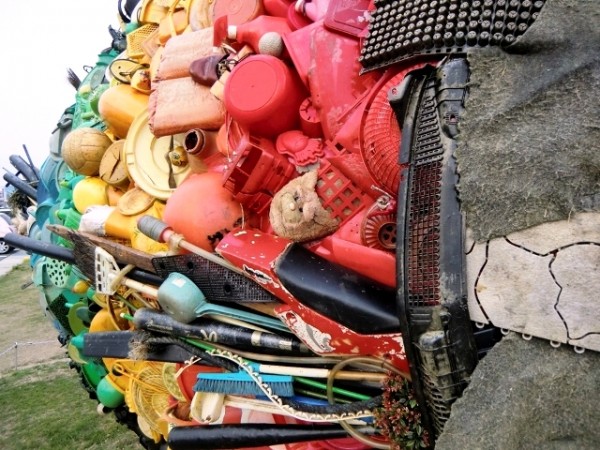 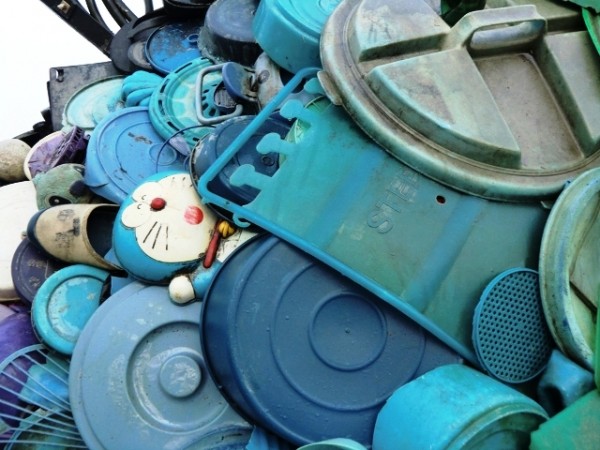 Doraemon is really ubiquitous is Japan, isn’t he? 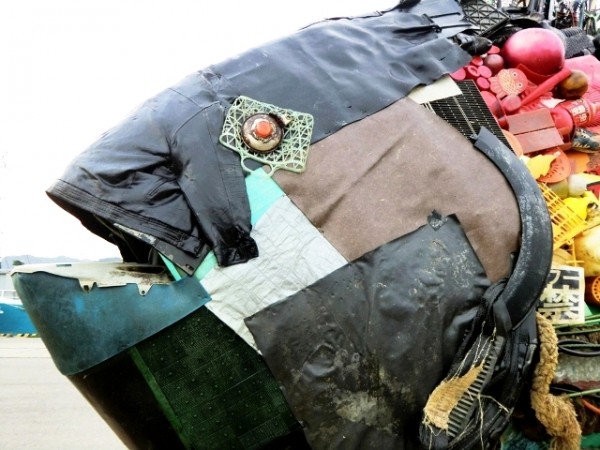 A few words about the artists. Yodogawa Technique is composed of two people: Kazuya Matsunaga and Hideaki Shibata (who is from Okayama) and if I understood properly, it has become their specialty to collect garbage left around in more or less natural spaces to turn it into art (their name comes from their first collaboration which consisted in cleaning up the Yodogawa, a river located in Osaka).

Here are a few pieces of information about them and their blog in Japanese. 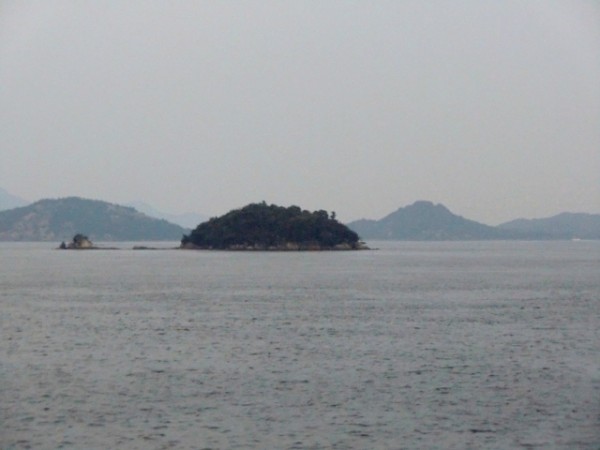 One of those minuscule islets one can find in the Seto Inland Sea.
(here, in between Uno and Naoshima)