The Setouchi International Art Festival artwork of the day is in three parts. Well, only two to these parts are pieces of art, the third one is a café, and all of them are located in a big house and its inner yard on Ogijima.

These three elements put together on that spot represented perfectly what the festival was trying to do: transform, during a three month period, these islands in meeting places between the local populations and the rest of Japan (and more), through art, possibly involving and engaging the people, in order to –hopefully- have a positive impact on the region (touristic, economic, demographic? who knows?) 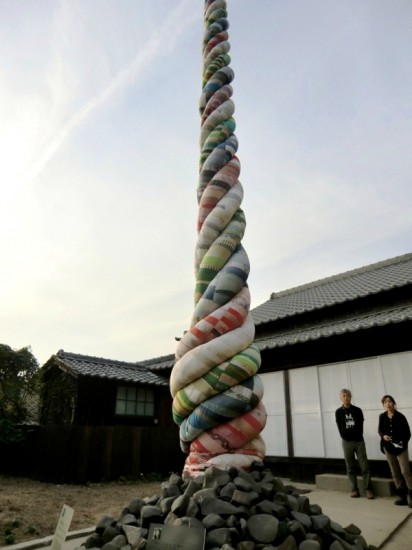 I regret not having paid more attention to this pillar, impatient that I was to go see the Memory Drops, because it may be one of the works that symbolizes the best what the Festival was.

The artist, Mariyo Yagi, didn’t build this 20 foot high pillar all by herself, far from it. About 500 people were involved in its construction, most of them being Ogijima’s inhabitants as well as people from the neighboring islands. They all took part, one way or the other in its conception. Did she need that many people? From a practical point of view, of course not, she didn’t. However, from a symbolical point of view, yes she totally needed as many people from the area as possible to be involved.

The pillar is some sort of giant quilt made from old clothes and fabric given by the local islanders. It also contains dried plants and weeds as well as sawdust. The base was made with gravel and basaltic stones. All of those natural materials coming from Ogijima itself.

The aim was to unite those natural and human elements and make a collaborative artwork out of them, but not any artwork as this pillar is also a Nawa, a sacred rope similar to those that are usually found in Shinto shrines marking sacred spots and objects. Of course, the spiral shape perfectly symbolizes interdependence. Isolated and alone –like the pieces of clothing- one is fragile, but all together, they’re strong and resistant. I don’t think I need to explain the metaphor applied to the island communities of the area.

In old Japanese, Na means “you” and Wa means “I” so Nawa can also mean that one can find uniqueness in diversity and vice versa (each one of us is unique, but together we are a whole thing too) and that is why Mariyo Yagi often uses this theme in her works that almost always involve local communities.

(I found most of the information and explanations I’m giving here on this blog, which I assume belongs to the artist’s daughter). 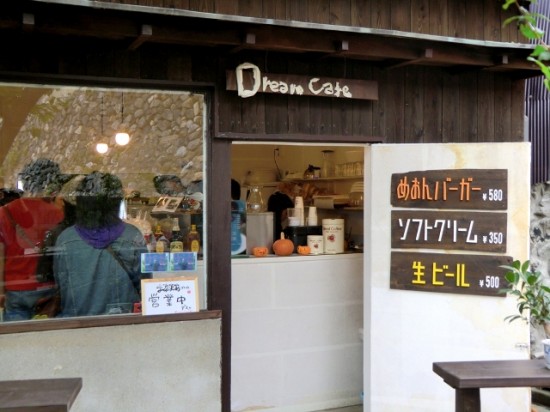 Not really a work of art but this little café was not only cute, it also had a great atmosphere, creating a friendly and lively ambiance to the place. One could it Meon Burgers there (the patties being made not with meat but with local fish). I heard they were delicious, but unfortunately I didn’t get to try them. One could also eat ice creams and drink beer. I don’t know if there was anything else on the menu (those were the items mentioned and priced on the door).

I don’t have much more to tell about it except for the fact that it contributed greatly in making the place a great meeting place for both visitors and locals. Those types of places –and there were several on Ogijima- played a big role in the fact that I think Ogijima had the best atmosphere of all of the islands of the festival.

A SHELTER FOR DROPS OF MEMORY 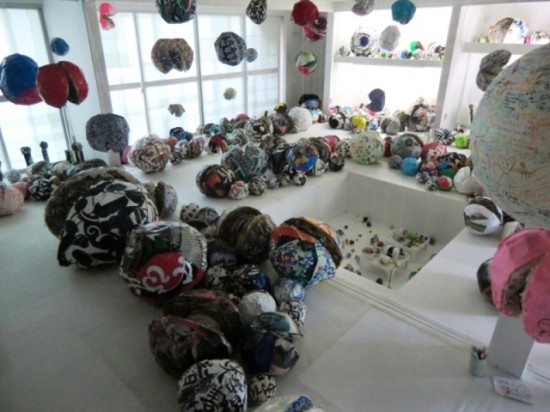 The main piece of art of the place was A Shelter for Drops of Memory, once again a collaborative artwork, directed this time by Takeshi Kawashima.

It was a big white room where paper balls of different sizes were gathered. Those Memory Drops, made of newspapers, magazines, diaries, letters, wrapping paper and other things containing memories, one way or the other. Some had been made by the artist himself, some more had been made by the locals, some others came from the visitors who could took part in Memory Drop making workshops. We were tempted but once again time was not on our side. 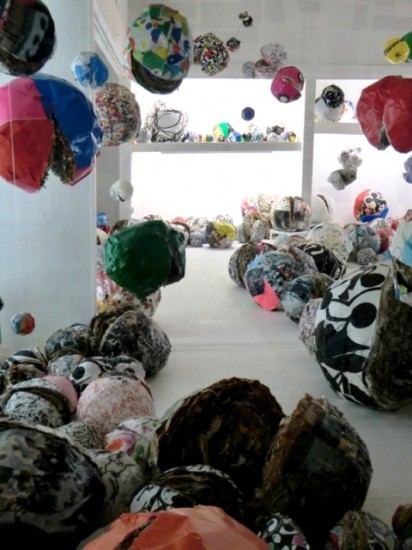 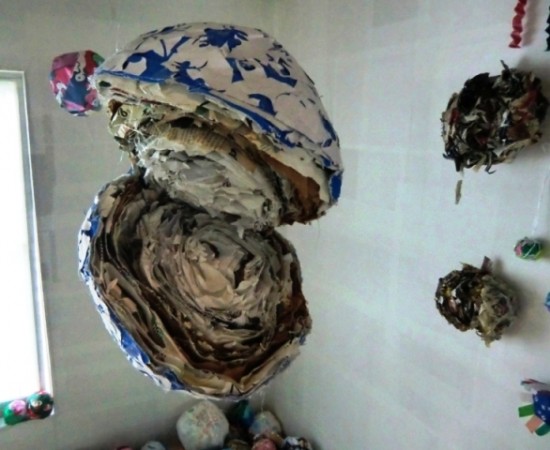 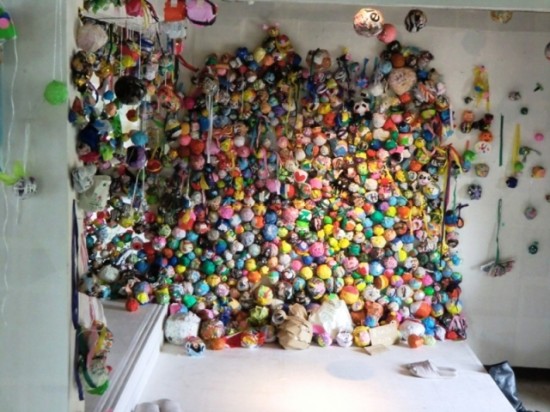 I really liked those artworks. They were miles away from the pretentious art one can usually find in galleries (especially in France), where artworks are usually as obscure and as inaccessible as possible. Intellectually, as their obscure concepts often hide a lack of work or of creativity. Physically too, one doesn’t touch or get near pieces of art in galleries and museums. That in my opinion contributes to the image of contemporary artists living in ivory towers and totally disconnected and oblivious of the real world. Thankfully, they’re not all like that. Generally, speaking, in the Festival, most works were accessible, but there, we had pieces of art, both Memory Drops and Nawa, that were not only made with the help of local communities, but they were works that one could walk around, touch, or even write on! Talk about proximity. 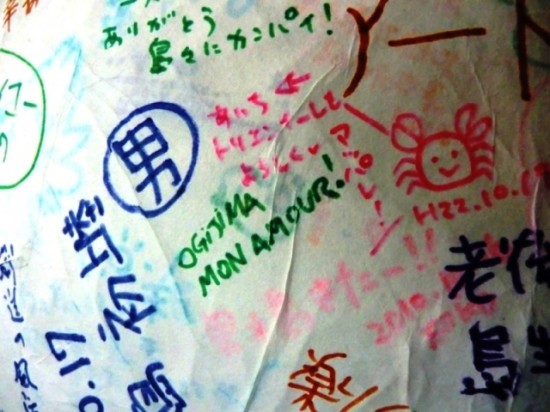 I wonder who wrote that message in French in the middle... 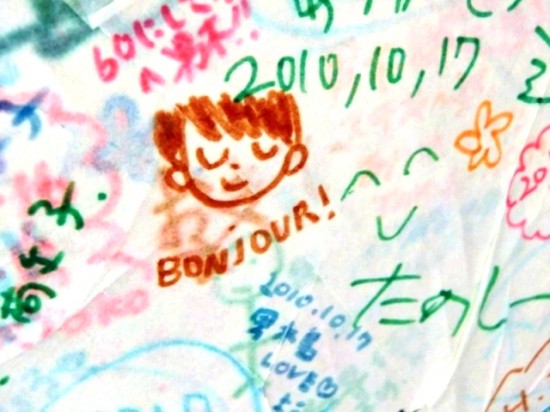 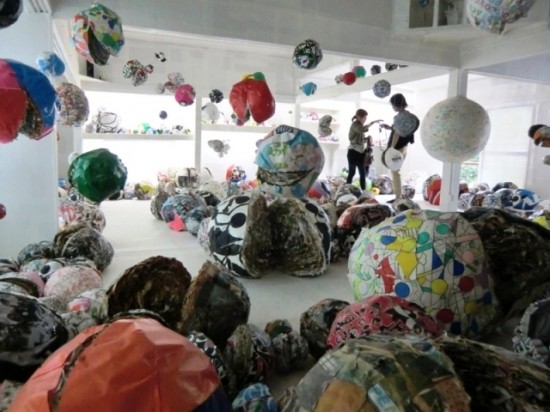 Dream Friends is a permanent fixure of Art Setouchi on Ogijima (at least until October 2012) and I really advise you to check it out if you visit Ogijima.
From January 15 to the end of March, it will be open on weekends, from 11am to 4pm (I don’t know about after March, although I’m afraid it will close and be dismantled).
Admission is ¥300.

If you go to the area (or if you’re in Japan and need travel ideas for the next three months) I cannot advise you enough to go visit the islands of the Kagawa Prefecture, to see what’s left of the Setouchi Art festival (and this piece is one not to be missed) as well as to discover the local cultures.

(Ogijima’s map with the Festival artworks)