Last weekend was a pretty busy one. Four islands were visited in two days. Oshima, Megijima, and Ogijima on Saturday, Shodoshima on Sunday.

The reason was a preview of a certain number of the Setouchi Triennale 2019 new artworks’ sites. Why? With whom? How did I manage three islands in one day? I’ll still be mysterious for the duration of this post, and I’ll reveal everything at the end, stay tuned. 😉

Believe it or not, it was only my third trip to Oshima and the first one in six years.

Oshima is a very unique island, and until very recently (this month) access was very limited to outside visitors. You can read more about it on my very first post about Oshima.

We mostly walked around the art sites, you can see them on this picture:

Most of the art sites are in the yellowish buildings with brown-red roofs on the bottom-right side of the picture. However, the spot where the picture was taken matters too, as an artwork is going to be located around the small hill at the northern tip of the island (where the picture was taken). Unless I’m wrong, it’s going to be Ringwanderung by Tomoko Konoike, and right now it consists of a 1.5 km-long path around that hill. This path is currently being dug in the forest by the Koebi volunteers. I think Konoike-san was on site too. What is it going to look like in the end, beyond the path? No idea. 🙂

We briefly stopped at Megijima next (we were on a chartered boat so no need to return to Takamatsu) to see three new art sites.

The first one was not exactly new: 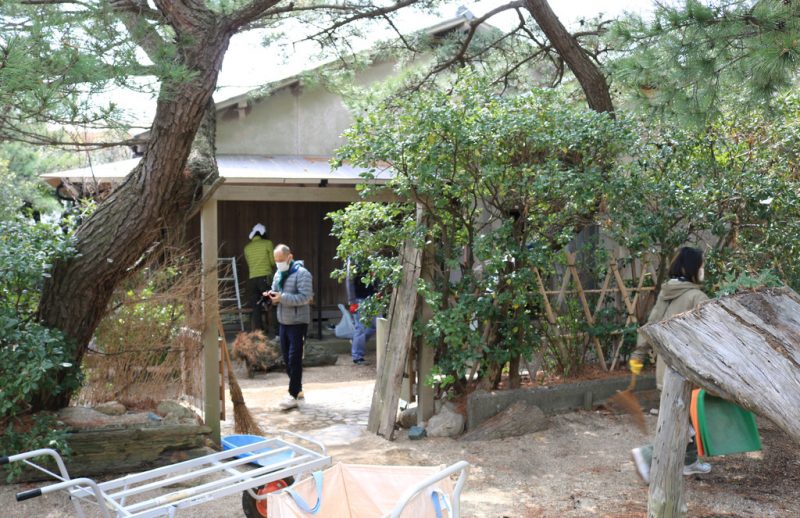 If you attended the Setouchi Triennale 2016, you will have recognized the site for Feel Feel Bonsai. This time the place will be called Bonsai Deepening Roots and it’s done by the same people, that is Setouchi Cogeiz for the design of the site and Masashi Hirao for the bonsai. 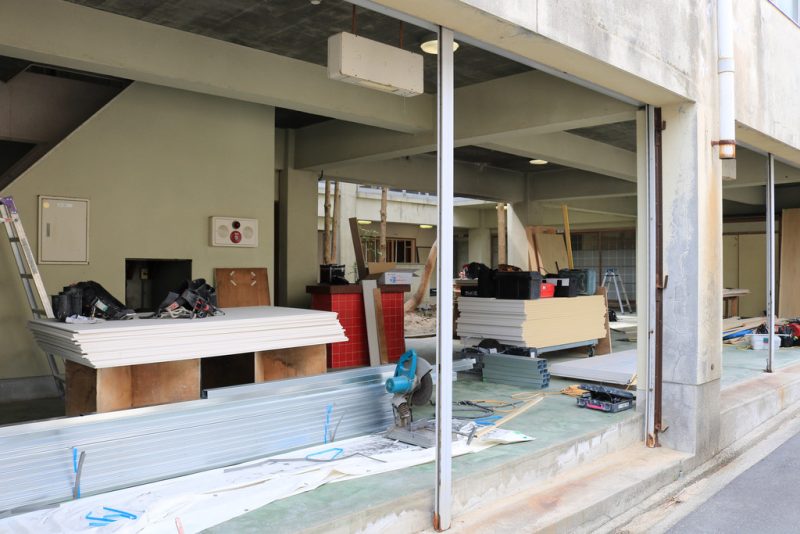 This former “beach house” and hostel will become the site for the Little Shops on the Island project that is going to house up to eight installations (some of them may be outdoors). The odd thing is that when I first arrived in Takamatsu, I taught in a local high school for a little while and this place was owned by the mother of one of my favorite students there. The place “mysteriously” closed about three or four years ago, and I have no idea why, as I didn’t teach at the high school anymore. Last time I heard about the student, she was in college in Fukuoka, where she will most likely start her last year this April.

Another site from 2016 that is being used again: 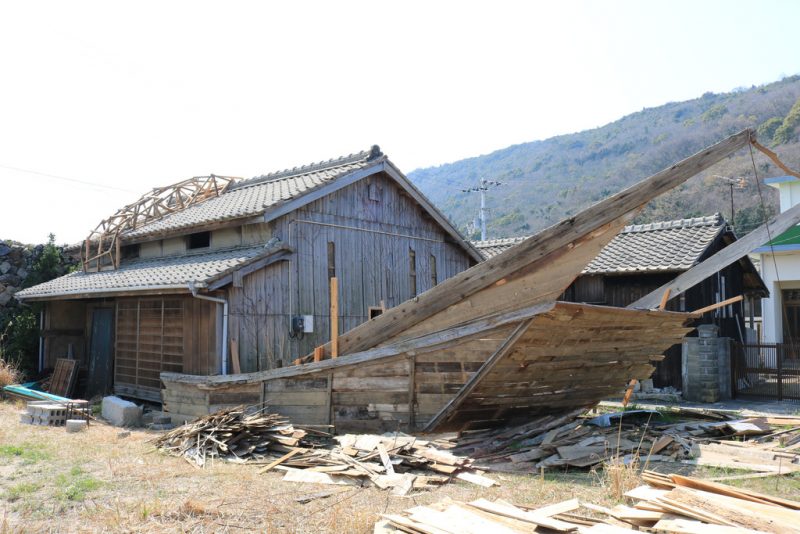 In 2016 it was Ogre’s House number three by Chaos Lounge (you can see what it looked like then on this post). This year, it’s going to be House-Boat by Kouryou (pronounced Kohryoh), who I think is a member of Chaos Lounge, or has worked with them.

After this very brief tour of Megijima, our next stop was:

Right off the boat, we were met with the reason why I went to Ogijima (too early) last week. That is Team Ogi‘s new art. It doesn’t have a name in English yet, but in Japanese, it’s Tako-tsuboru which could be translated by “trapping octopus“. 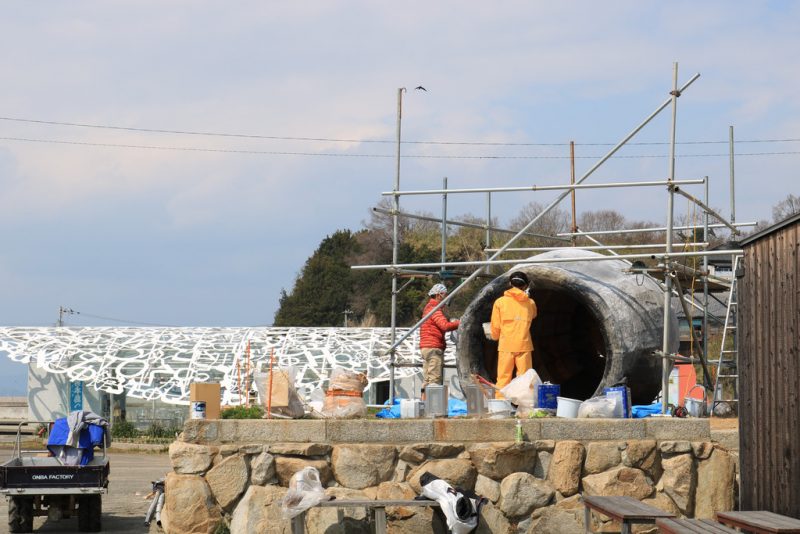 Oshima-san (in red) and the rest of Team Ogi were hard at work. I just said hello, as they didn’t have time to stop much to chat.

Once again, we went to various sites where there will be new art (it was the purpose of this trip after all). 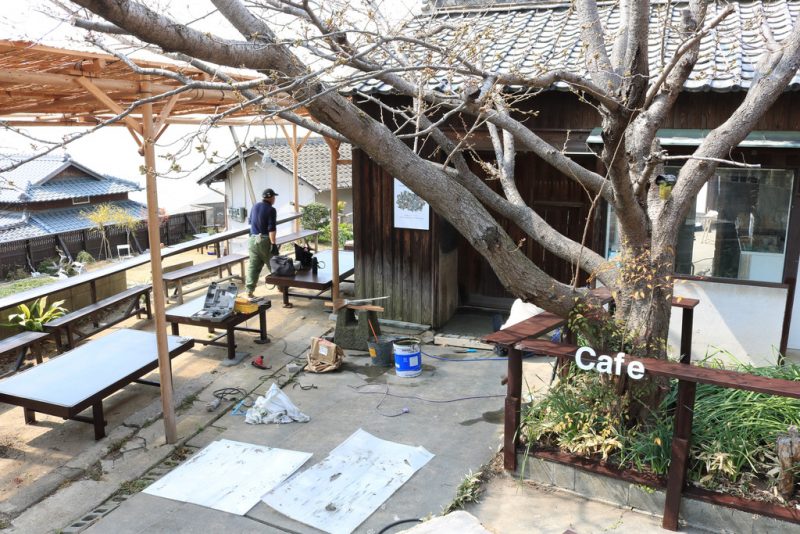 Takeshi Kawashima and Dream Friends Gallery is getting renovated before the new work of art, The Space Flower – Dance – Ring gets installed.

We stopped in front of the building where Sarah Westphal will have her installation too. It’s the old post office, but there is nothing to photograph really. So, in the meantime, I invite you to read the interview I made with her if you haven’t yet. 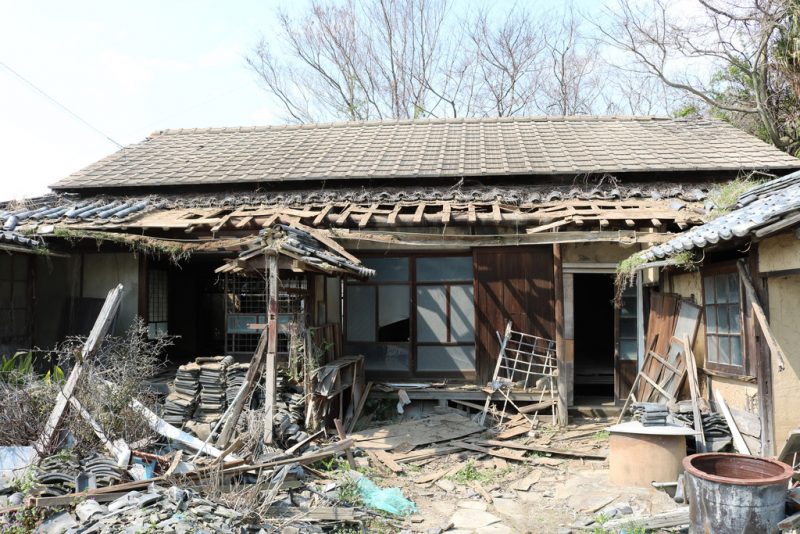 This abandoned house, right behind Memory Bottle, kinda is the “original abandoned house on Ogijima” for me, probably because it’s the first one I photographed, during one of my very first visits to the island. It’s soon (this summer) will become an art installation too, by Toshikatsu Endo. The name should be something like Trieb House. I gotta admit I’m almost sad that it’s being turned into an artwork. I really love it the way it is now and kinda hoped it would stay this way forever (or until it collapses, which is the more likely option).

Also, while I didn’t see him (well, I may have seen his silhouette in the distance), Gregor Schneider arrived on Ogijima shortly before we left in order to start planning his future artwork, and if I understood right it should be quite big, and I’m still not sure how it will fit where it’s supposed to be located (that is the street between Sea Vine and the road to the lighthouse). We’ll see – it shouldn’t be ready before the summer though.

And as the tour went much faster than “planned” (I mean, it was planned to go faster than planned in a way), I had plenty of time to go visit my friends at the library and at Damonte & Co. Some of my co-travelers had the same idea (because the Library and Damonte & Co are the “in” places on Ogijima nowadays). 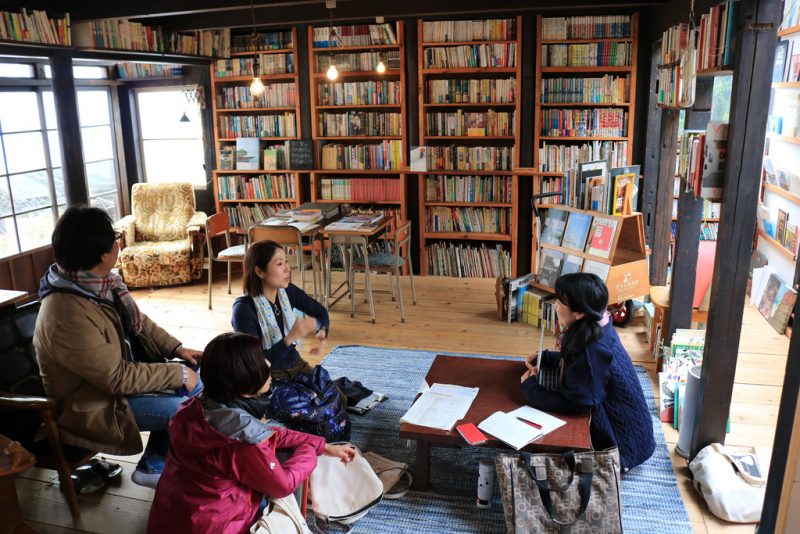 The following days, we headed to: 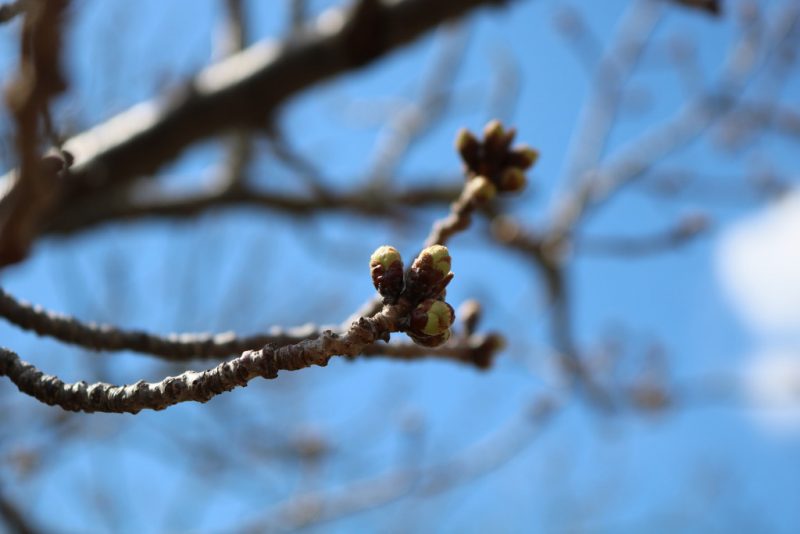 We were in Hitoyama to check on a new artwork there. Fluire by Giacomo Zaganelli. 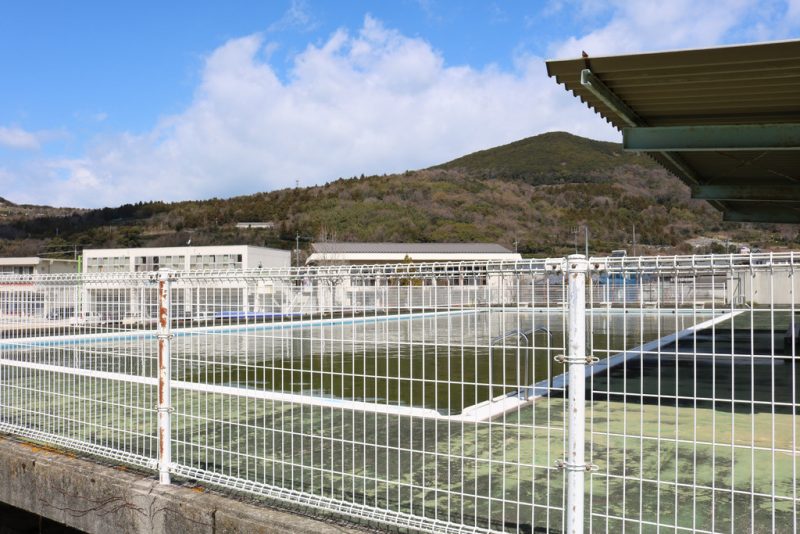 Well, a bit like the cherry blossoms, we’ll have to wait a little bit to see anything. I’m not sure what the artwork is supposed to look like, but I know it’s going to be in or around this swimming pool (that was part of the Hitoyama elementary school, now closed). As you can see, there’s nothing yet. That’s one of the interesting things about the Setouchi Triennale during the weeks that precede it; seeing the advancement (or lack thereof) of what’s happening on site.

Now, the fact that some locations have nothing yet doesn’t mean anything. The Triennale is still a month away, and not all artists can stay for weeks on site. Not all artists need to either. And while I love when artists are indeed on site, we have to understand that some artists (especially the ones from the other side of the planet) will do their work at home and only bring it and install it on the days preceding the start of the festival. 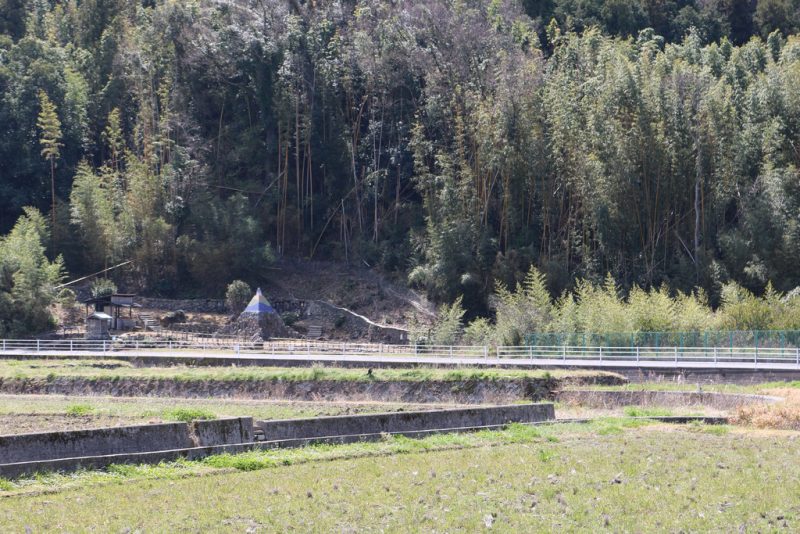 Masato Saito’s Shishigaki Island is still around in the distance. 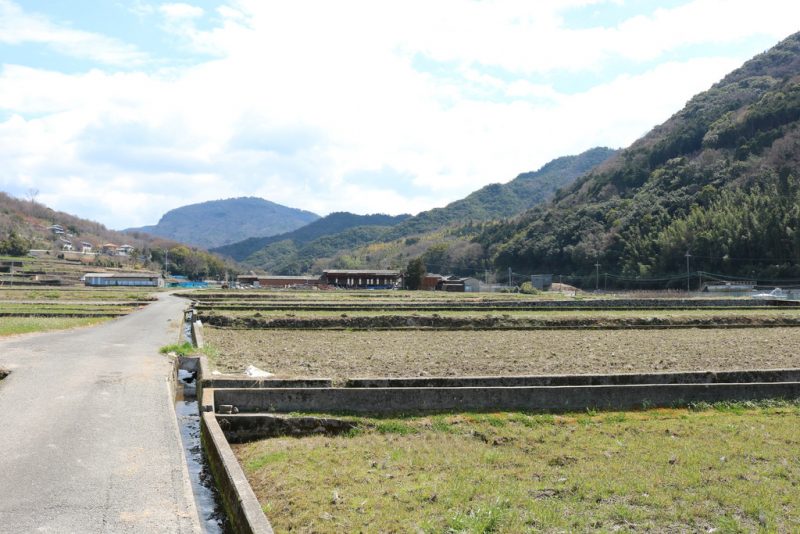 This valley between Hitoyama and Nakayama is one of my favorite spots on Shodoshima.

Next stop, Nakayama, where the next artist can’t afford to install his art at the last minute.

I’m talking about Wang Wen-Chich, who has started the fourth iteration of his giant bamboo house, always one of the most popular artworks of the Setouchi Triennale. This time it is called Love in Shodoshima and should more or less look like a seashell (but sometimes the final result is quite different from the original plan, so we’ll see). 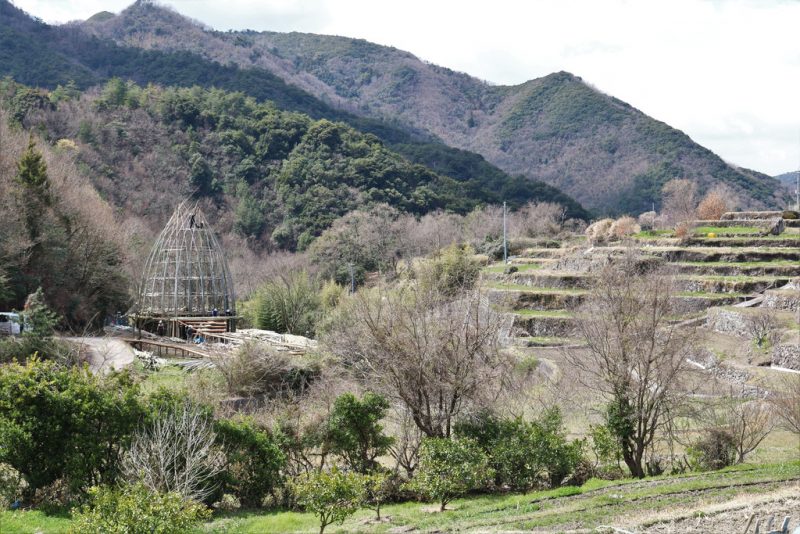 As you can see, it doesn’t exactly look like a seashell just yet.

We stopped to a certain number of art locations afterward, I didn’t take pictures of most of them (I figured you could do without picturess of closed doors), but here are a few: 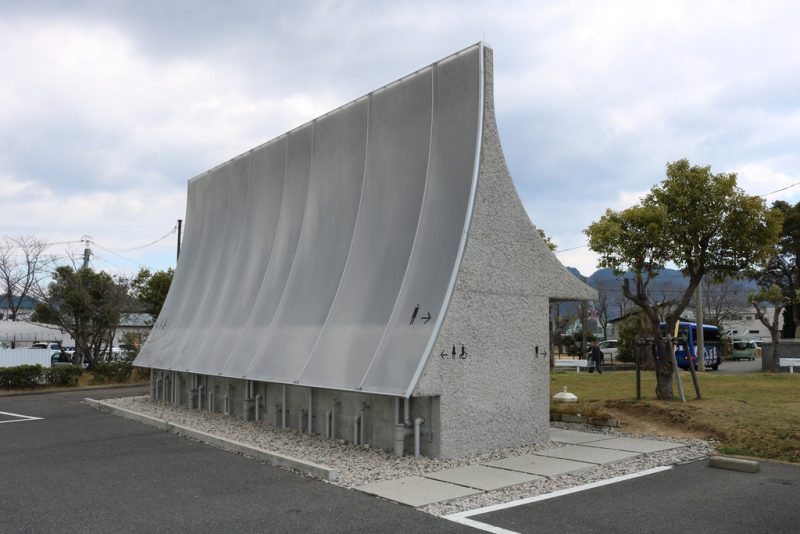 Not a new art, but I’m not sure I’ve ever shown it here. It is a public toilet in Kusakabe Port, but it’s also a Setouchi Triennale artwork: Stone Island’s Stone by Hideyuki Nakayama Architecture. 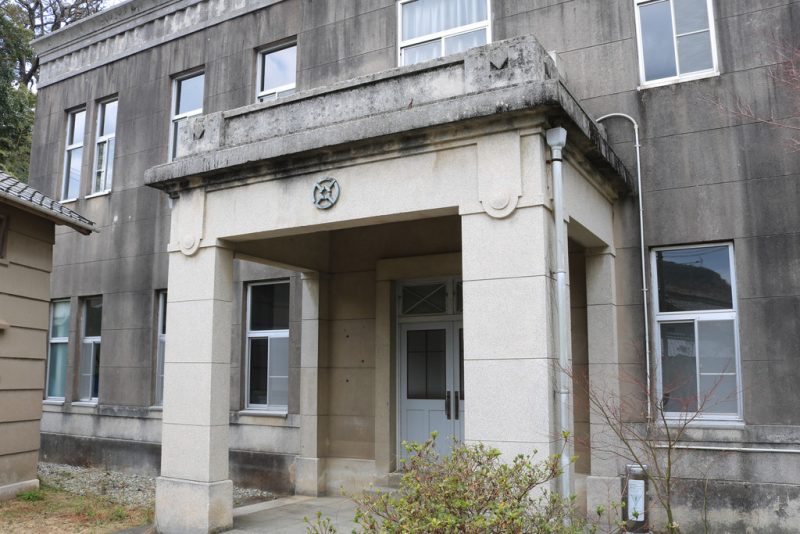 This building is a former soy sauce cooperative office. It housed one of my favorite artworks of 2013 and one I didn’t really care for in 2016. This year, it’s going to house The Silent Room by Hans Op de Beeck.

On the other side of the (tiny) street, Georges Rousse’s Georges Gallery is being prepared:

It looks like it will also be a café. Nice. Could it be a new permanent art gallery in Umaki?

In Noma, there is this small olive orchard on a big rectangle of reclaimed land. It will also be the location for Rosa Barba’s Fosse d’Orchestre / White Museum. 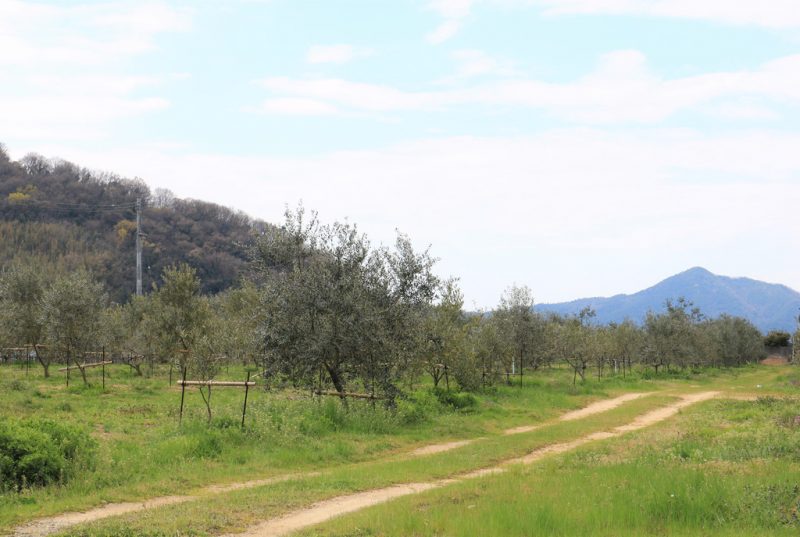 Next, we headed 30 minutes north, to Fukuda in the north-east corner of Shodoshima, where Fukutake House is: 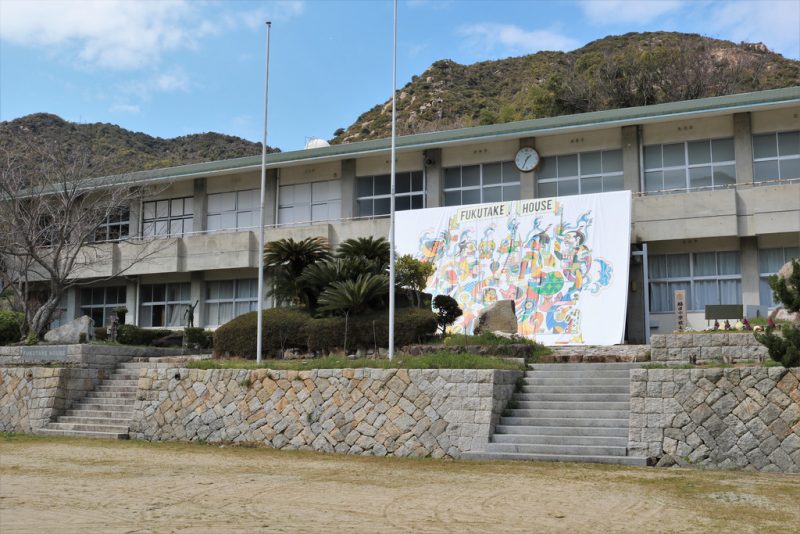 There will be a certain number of exhibits inside.

And right next to Fukutake House is Ryue Nishizawa’s Fukita Pavilion: 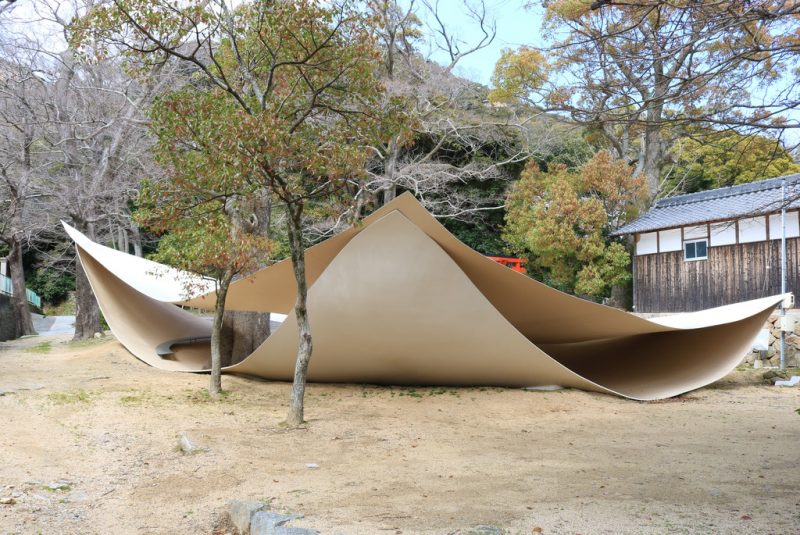 (a small technical note: while it’s been around since 2013, I think it’s the first time it is officially part of the Triennale on its own, and not as a part of Fukutake House, I could be wrong)

Our final stop was Obe, not for this building: 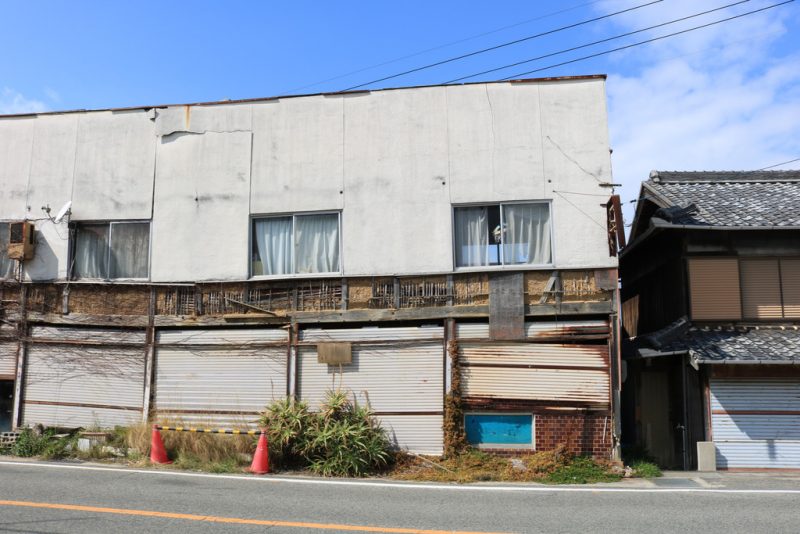 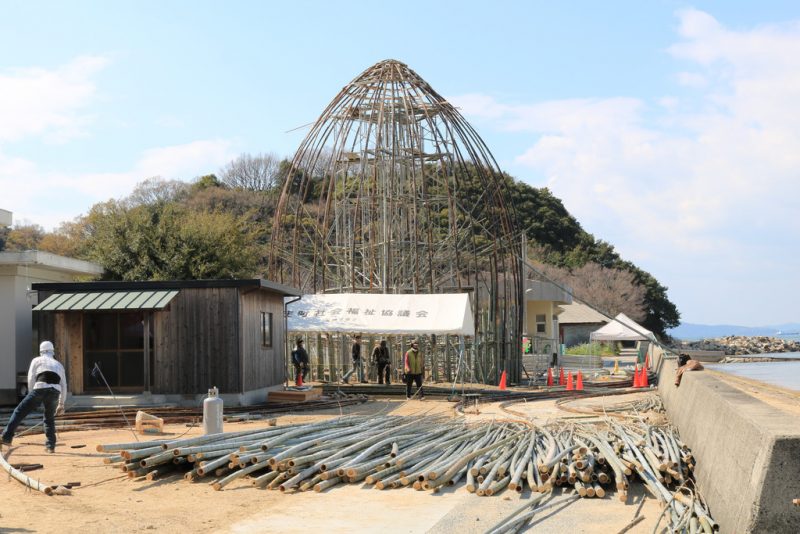 Lin Shuen-Long‘s newest work for the Triennale: Beyond the Border – Wave.
While looking very different from its predecessors, it is part of his Beyond the Border series, which started with the Ocean (first on Teshima in 2013, and it moved to Takamatsu in 2016 where it still stands), and was continued with Tide in 2016 on the same spot in Obe. Beyond the Border – Tide was one of the most beautiful and moving artworks of 2016, and also being a big fan of Beyond the Border – the Ocean, I’m really looking forward to this new one.

Interestingly, at the moment, both this construction and Wang Wen-Chih’s really look alike, but the finished structures should look very different from each other (if I am to believe the concept art of this one, it should be a gigantic – two or three times the size of this current structure – spiky sphere, like a giant sea urchin and it should extend into the water. In other words, I can’t wait.

If you’re curious, Lin Shuen-Long is quite active on Facebook where he posts updates several times a week. 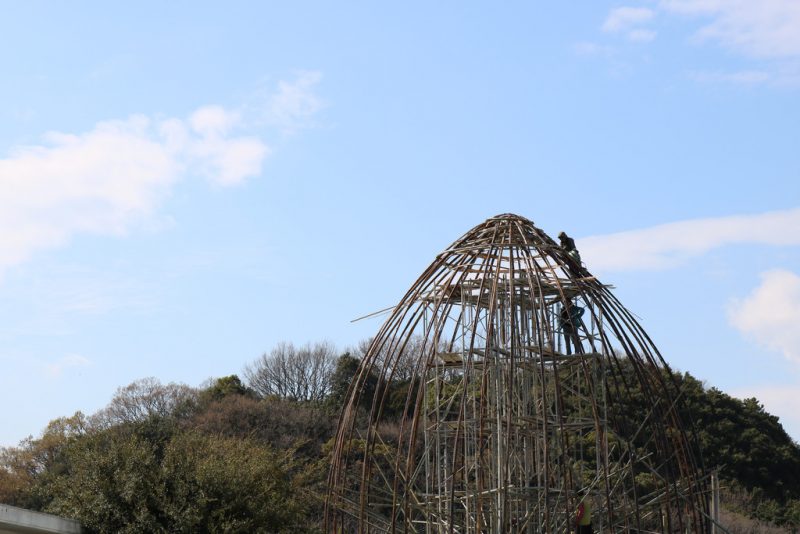 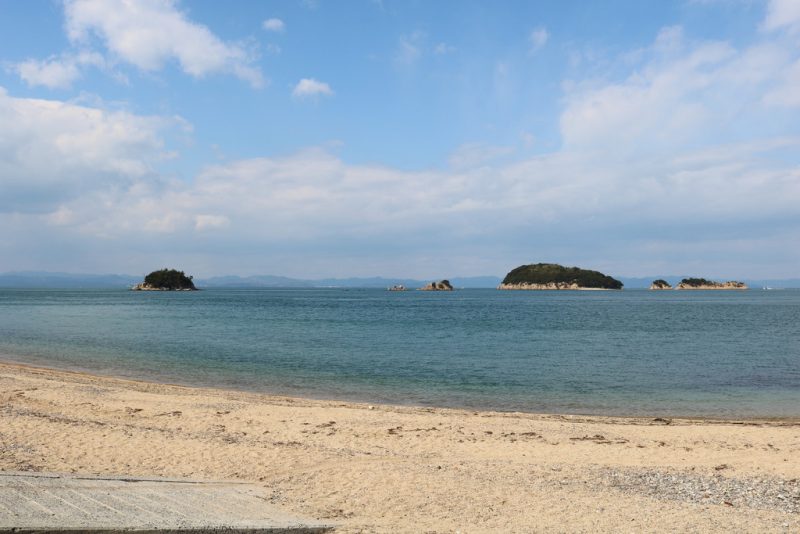 Obe Beach is quite beautiful

That’s all for those two trips over the weekend.

The Setouchi Triennale 2019 is exactly one month away. I’ll try to go to a few more sites before it starts (not making any promises, although I’m almost sure I’ll at least go to Ogijima).

Oh, wait… I didn’t tell you the reason for these trips, as well as the ones last November.

I guess I can now.

So, you know those official tours that the Setouchi Triennale is organizing this year, right? Well, I’ll be one of the official guides. More information very soon. Stay tuned.