For this third part of my adventures in the Setouchi Triennale 2019, we’re heading to my favorite place in the area if not in Japan: Ogijima.

Before we go any further, if you haven’t done so, please read the previous episodes:

The day was April 28th and I needed to go to Ogijima on that day specifically because one of my favorite recurrent events of the Triennale was taking place: Team Ogi’s “boat dance” guest starring the Seppuku Pistols who came to the Triennale for the first time in 2016, but who loved the area so much that they now return pretty much every year and sometimes twice a year (I think one of the members is from Shikoku, that helps).

This year’s “boat dance” was a very special one, as it was the last one. Unfortunately, Team Ogi’s first project from 2013 is not officially part of the Triennale anymore, so the boat dance can’t be a regular feature anymore, mostly for budget reasons (this one could only happen thanks to crowdfunding).

What is this boat dance thing exactly? In short, it’s a very old Ogijima tradition (it may also have existed in other places) that has been revived. Back in the days, when the fishermen from the island had an exceptional catch, they would return to the island together as a fleet, and make circles in front the port, making as much noise as possible in order to celebrate as well as to call the other villagers down the port to get help unloading the fish.

In 2013, Team Ogi revived the tradition to celebrate the Setouchi Triennale, at the opening of each session in 2013, and at the opening and the closing of the festival in 2016.

If you want to see previous instances from the blog, here they are:

Here is what it looked like from the port.

I filmed with my new camera, but this was the first time I used the video function. I have yet to master it (fun and strange fact: the video slightly pauses when I take a picture while filming, oh well). 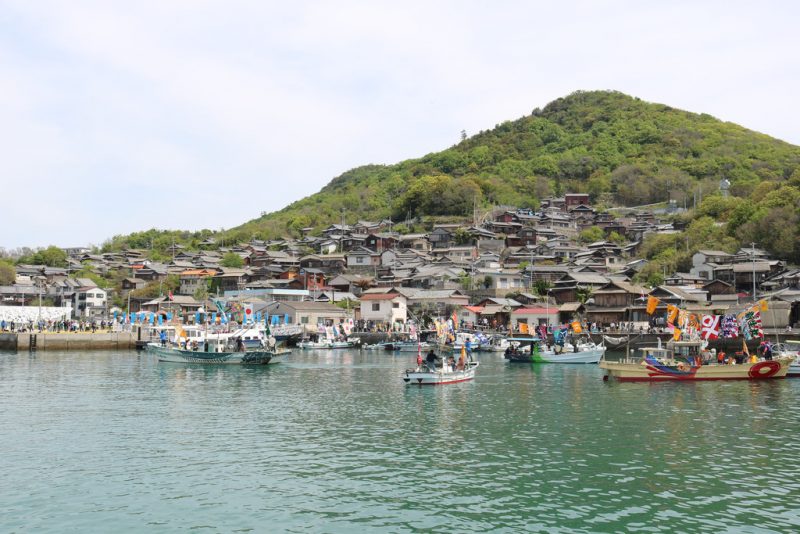 And after everyone came back to the island safely, the Seppuku Pistols played a small concert on the port: 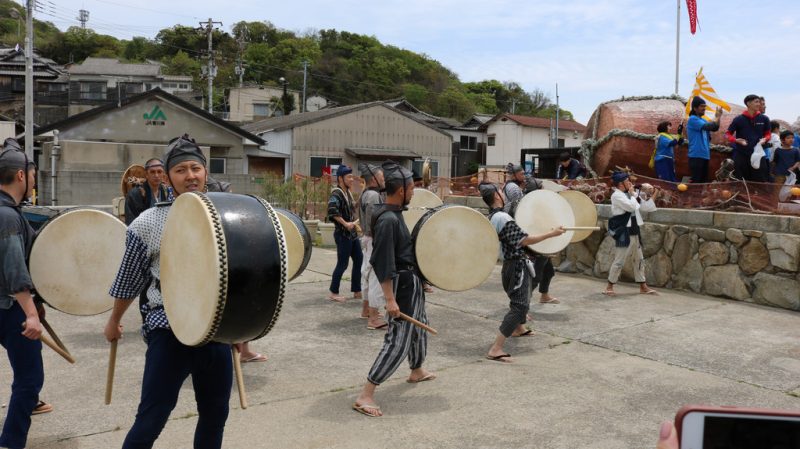 Their performance was a bit shorter than usual, but they did spend quite some time on Team Ogi’s boats, and right after they headed to Shodoshima. Here is a video of their performance there in the afternoon (not my video):

If you want to see their previous performances in Setouchi, a bunch of them are on the blog.

If Team Ogi’s original project is not officially part of the Triennale anymore, they have a brand new one this year, Takotsuboru.

Let me explain a little bit.

First of all, the title means more or less “trapping octopuses”.

Team Ogi is the brainchild of my old friend (the very first person I’ve met in Japan besides my in-laws) Yoshifumi Oshima (who’s been featured many times on this blog), but before Team Ogi, there was (and still is) Onba Factory.

Onba Factory is, in my eyes, the most important art project of the Setouchi Triennale because it embodies the best what this festival is all about; art in order to revitalize an island community. This is what Onba Factory did and still does, and if Ogijima’s revitalization is probably the most successful and meaningful one among all the Setouchi islands, it’s in great parts due to Oshima-san.

As Onba Factory mostly focused on the island’s women, in 2013, Team Ogi was created with a focus on the male islanders in mind, and especially its fishermen. As a side note, the Ogi in Ogijima is written like this 男木 and means “male tree” (even if originally it meant “hand fan”, but that’s a story for another day), but the Ogi in Team Ogi is actually written 男気 and means “male spirit.” All of this sounds pretty remote from octopus traps, right? Just bear with me, we’re getting closer.

And here is the result:

Beyond the port, we didn’t visit much art on that day, the island was just too crowded. People at Koebi-tai (the volunteers without whom the Triennale simply wouldn’t exist) estimated that around 600 visitors were present on the island (as a reminder around 170 people live on the island), which is on par with the craziness of the last week of 2010, and probably the record of the most visitors on the island in one day.

However, walking around, whenever we noticed one artwork with little to no line, we jumped inside for a short while (however, even without waiting lines, they were still crowded).

I really liked how it looked at the same time so similar and so different that its predecessor, Kaleidoscope Black & White.

And I also got to see the new Sea Vine! As a reminder, Sea Vine is one of the original artworks from 2010, but it was dismantled last year to my great surprise. Except that it returned this year in a new version. Basically, Haruki Takahashi did a new sculpture using the same concept as the previous one, and it looks as awesome as the previous one. Also, the name has actually slightly changed, it’s now Sea Vine: on the shoreline. 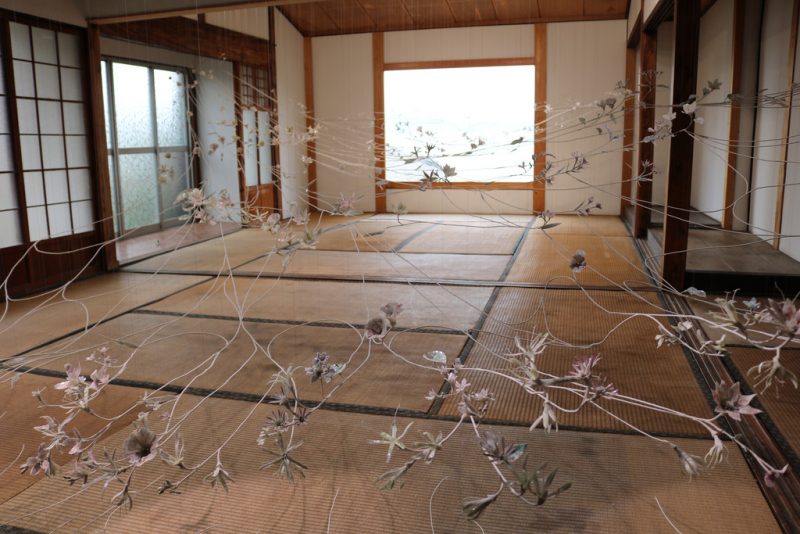 And while not a new artwork, Mayumi Kuri‘s Memory Bottle remains one of my very favorites of the entire Triennale, so there’s no way I’m going to skip an opportunity to visit it. It was a bit too crowded to fully enjoy it, though. 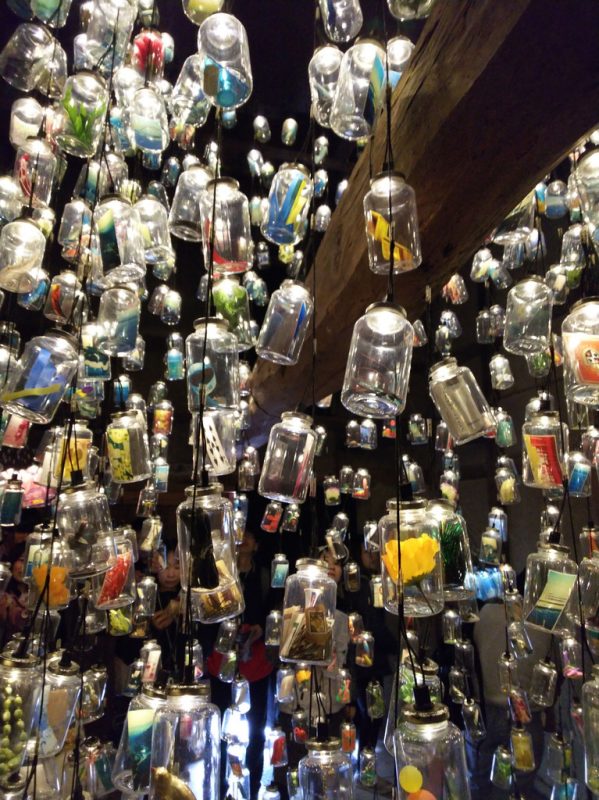 The rest of the day was mostly spent playing with new and old friends.

The line for Meon (the ferry) in the middle of the afternoon: 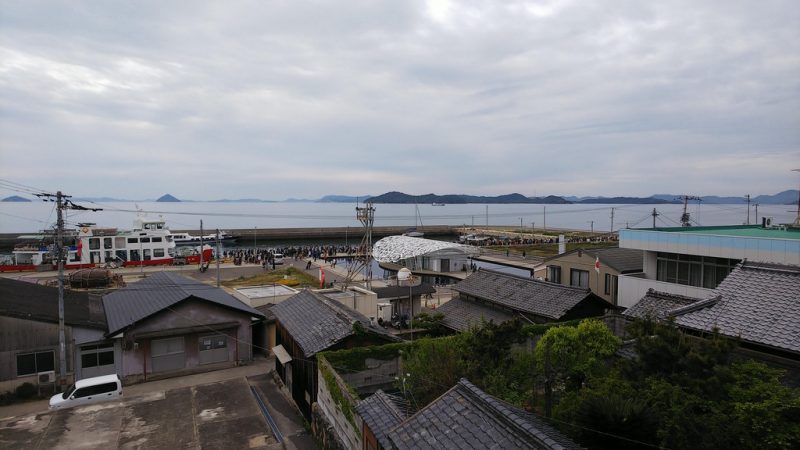 And the line in the late afternoon (I was in it this time): 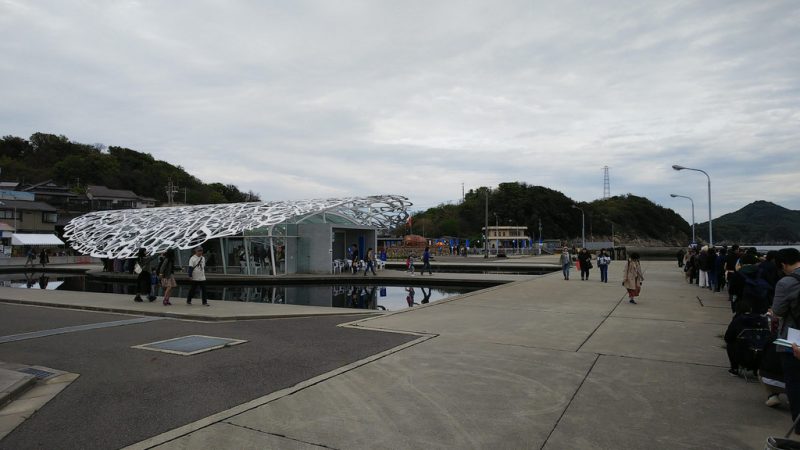 Luckily, long gone are the days of near panic (both from staff and visitors) when the last boat would get full with still a long line waiting on the port (it did happen several times back in 2010). Now, everything is a well-oiled machine, and you will not be stranded on an island because of crowds (as long as you arrive on time at the port, of course).

For example, on that day, both Meons ran all day long, which allowed interesting and unusual views such as when arriving near Megi Port:

I referenced 2010 a couple of times in this post. Here is why. In 2010, when the first Triennale was organized, they were hoping for 300,000 visitors, not sure if they would even get them. At the time, the Triennale took place for three months in the row (August, September, October). They got their 300,000 visitors… They got them sometime around late September. And then, more than 500,000 visitors all arrived in October for a total of around 900,000 visitors! In August and September, the Triennale was not really known yet, and the weather was not the friendliest (August being extremely hot, and September hot and rainy), but the word to mouth did its job, and everybody decided to go in October.

Never before nor again the islands saw so many people coming to visit them. Everyone was taken by surprise and no one was really prepared for this. The most difficult moments were boarding the boats to return to Takamatsu, with many people on many islands getting stranded because there was not enough room on the last boat and no extra boats.

Lots of changes were made in 2013 and 2016 (including splitting the festival into three sessions so that the influx of visitors be less taxing on the Islanders) and things went smoothly.

This year for some reason, it was decided that the opening of the Triennale would coincide with Golden Week (that reason is that the number of visitors was somewhat stable between 2013 and 2016 – around one million each – and they want to increase those numbers, regardless of whether it makes sense to do it that way or not).

And of course, having the Triennale during Golden Week meant that we were back to the craziness and crowds that were experienced in October 2010.
Luckily, this time everyone was prepared, and there doesn’t seem to have been many hiccups… Just too many people… This is one of the reasons I’m spreading my visits a lot this year and didn’t rush to see as many things as possible early as I’ve done in the past