These days, I’m celebrating a very special anniversary. That is the 10th anniversary of my first visit to Japan.

And more precisely, last week was the 10th anniversary of my first visit to Ogijima!

In case you missed it back then, here is the tale of my very first visit to the island:

So, I had to do something special for the occasion, right? But what?

After some reflection, I decided that going to the last spots of the island where I hadn’t been yet would make sense, don’t you think?

What is quite ironic is that at the time of that first visit, the Setouchi Triennale was not going to start for another year. Ogijima was a very sleepy island that had started to die without anyone noticing, not even the Islanders. It used to only receive a few rare visitors. On the documentation that was available about the island, the only points of interest that were mentioned were its lighthouse, its daffodils, as well as its cave and the “tank rock.” (You could tell that Takamatsu’s tourism office had no idea how to promote the place)

In other terms, the most “famous” spots on the island a decade ago, are the last ones I discovered.

Last Tuesday was a perfect day for a small hike on Ogijima, so there I went. 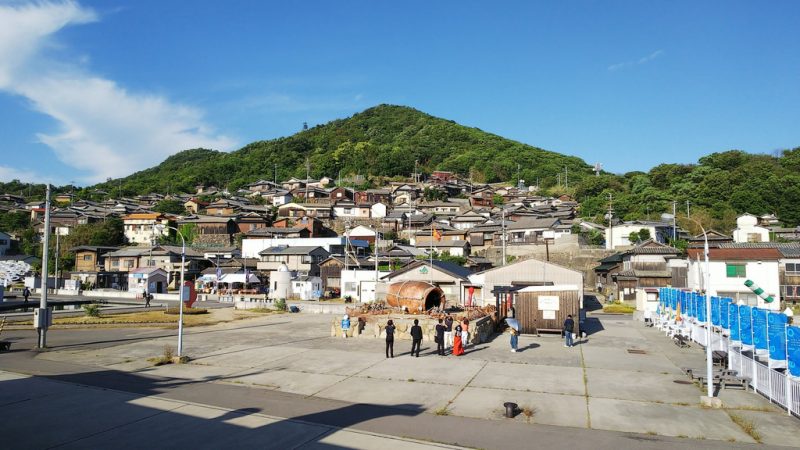 As soon as I left the ferry, I headed to Damonte & Co for an early delicious lunch: 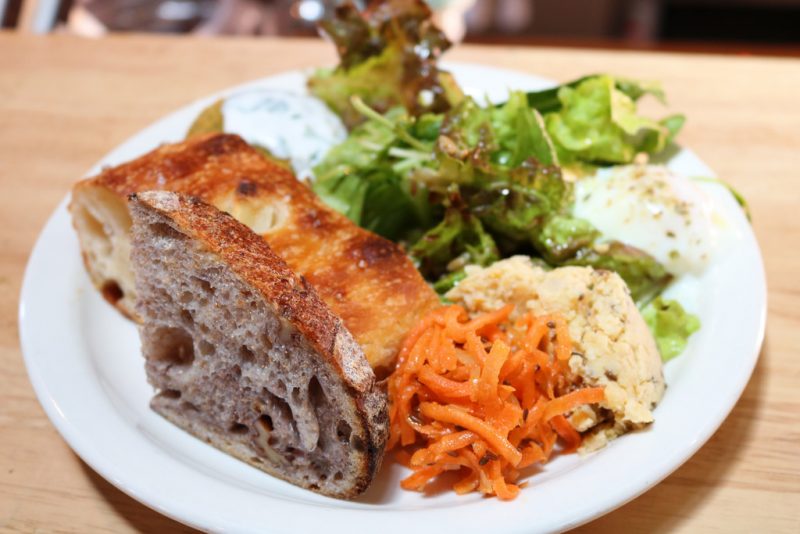 The falafel especially (that we can barely see on the picture, whoops) was a killer. Probably the best I had in my life. Although, I must admit that I haven’t had many falafels in my life. I discovered this dish in the US (big mistake, as it wasn’t good at all – like most foods in the US, I know – so I’ve never been eager to eat more after that, now I’ll reconsider more often).

And as the café wasn’t too crowded, I could catch up with Kaisho Damonte a little, as we had barely seen each other since the beginning of the Triennale, the island and his café were that busy.

After lunch, I met with my co-adventurer for the day, we left the village and went climbing Ogijima’s big hill (small mountain ?)

The climb is very tricky. Sure, there’s a path, sure it seems fine, but it actually climbs quite high and that gave me the opportunity to realize that I was seriously out of shape as we reached the observation deck.

Pretty much any accessible high point in the Seto Inland Sea has its own observation deck. You’d believe that it’s always pretty much the same thing? Big mistake. Each one of them offers a unique, but equally amazing view.

From Ogijima’s, this is what you can see: 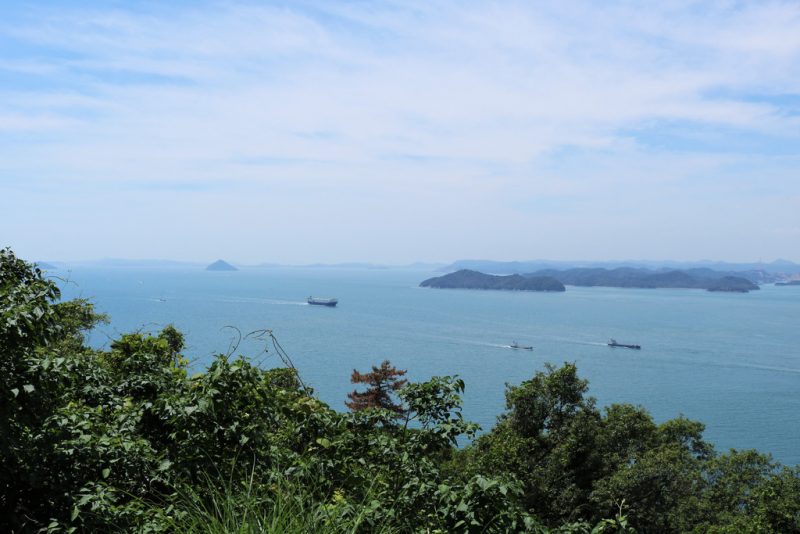 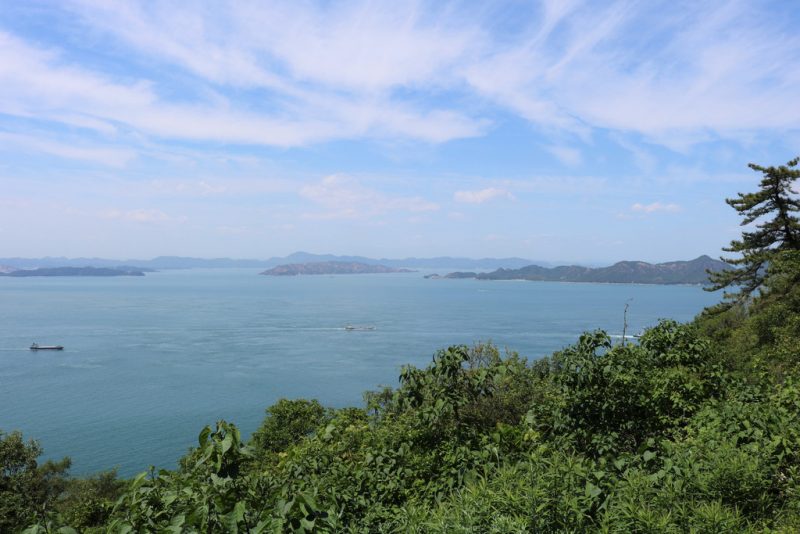 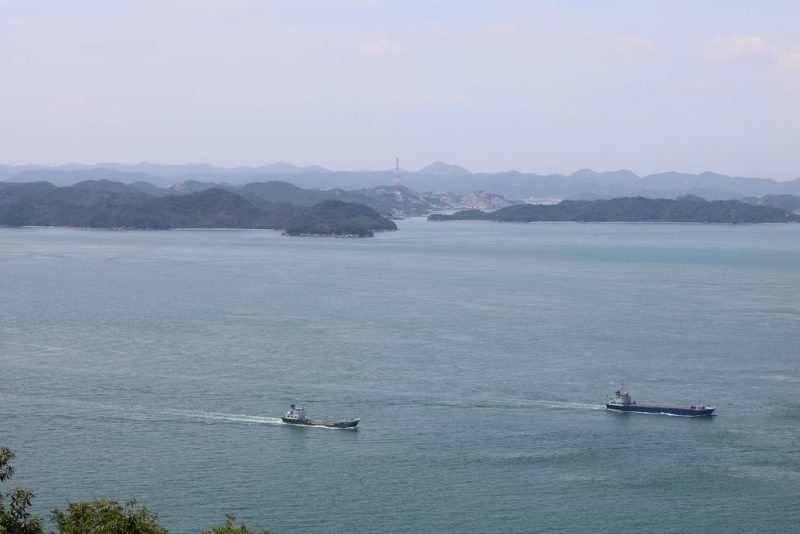 Naoshima (you can distinguish Honmura if you look closely), Mukaejima, and Honshu in the background

And 20 meters or so behind the observation deck, you can find Jii’s Hole, that is Ogijima’s cave.

As you already know (or not?), when Momotaro decided to seek out the Oni (some sort of Japanese Ogres) that were terrorizing the region, he found them on an island called Onigashima (which means Oni Island – I guess they were not that difficult to find after all). The Oni lived in a cave located near the top of the island. Momotaro and his animal friends found them and killed them all. End of story.

Not quite. Another story says that one of the Oni survived and went into hiding in the cave of an island nearby, where he spent the rest of its days. The name of that Oni? Jii.

So, if Megijima is the Onigashima of the legend, it means that Ogijima is the island where Jii found refuge and that this cave is his “hole.” 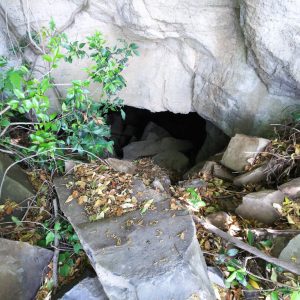 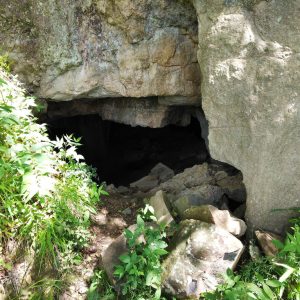 There are two entrances. They’re both quite small. And the rest of the cave isn’t that big either. 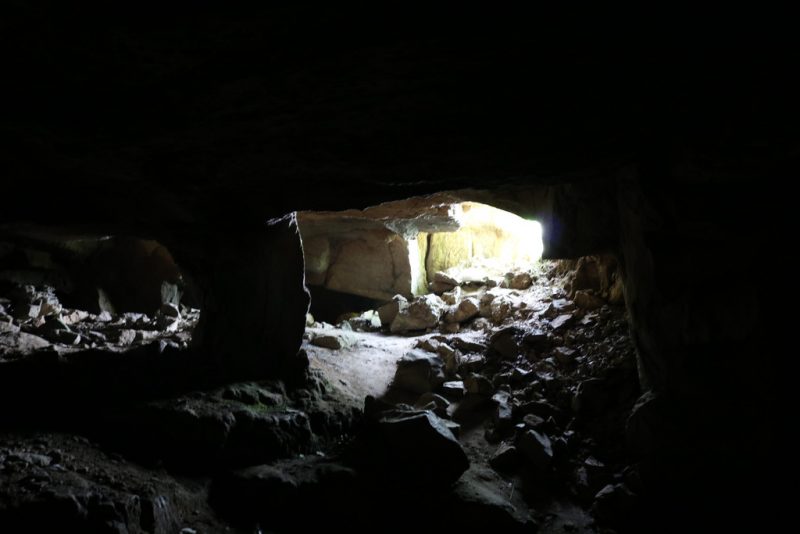 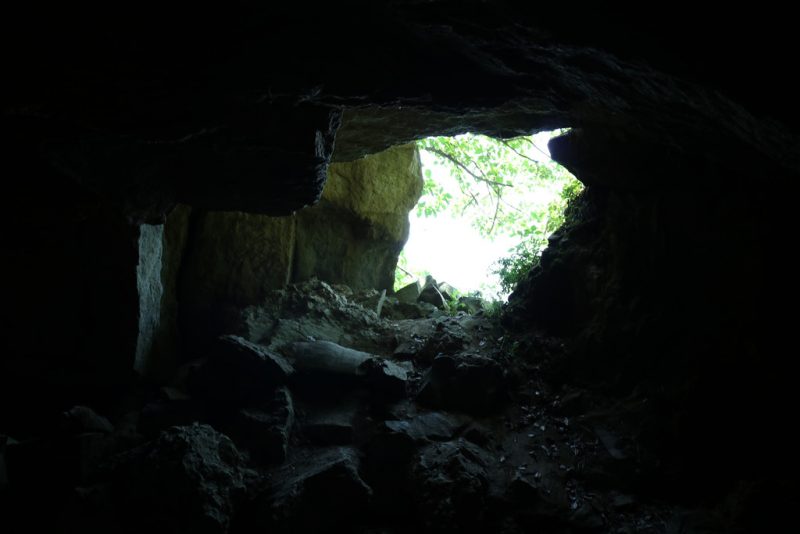 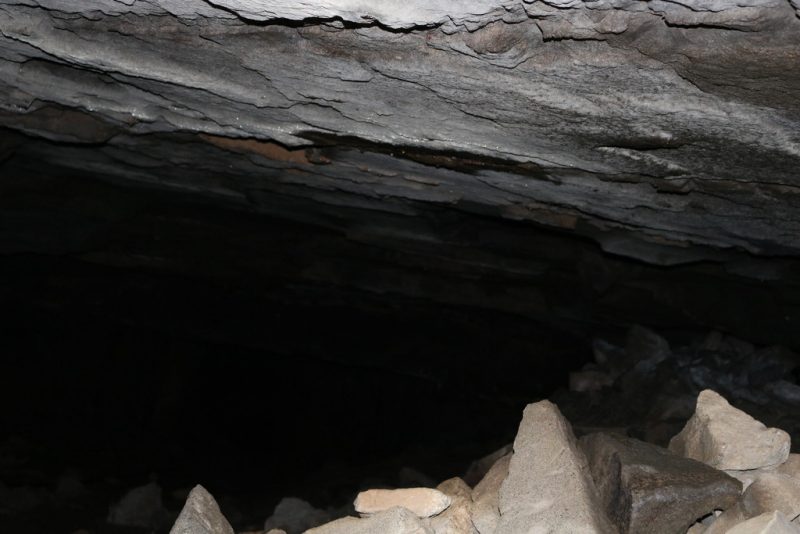 The cave may be small, but one part is bigger and deeper than it first looks. Darker also. It was pitch black over there, and it was too unsafe to even think of trying to see what was there or how deep it was without proper equipment (at least a flashlight).

I would really like to know more about this cave (as well as Megijima’s, but that one is probably too touristy now to have anything of historical interest to give out). Some archeological digging may or may not reveal its secrets, but I doubt that a researcher ever has any interest in it. 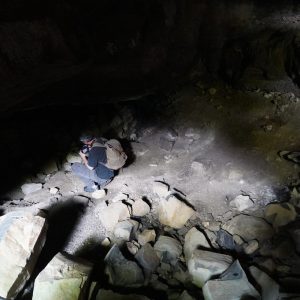 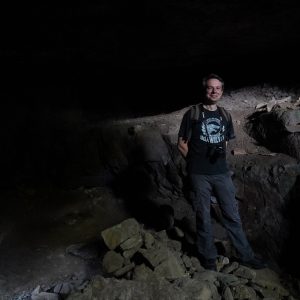 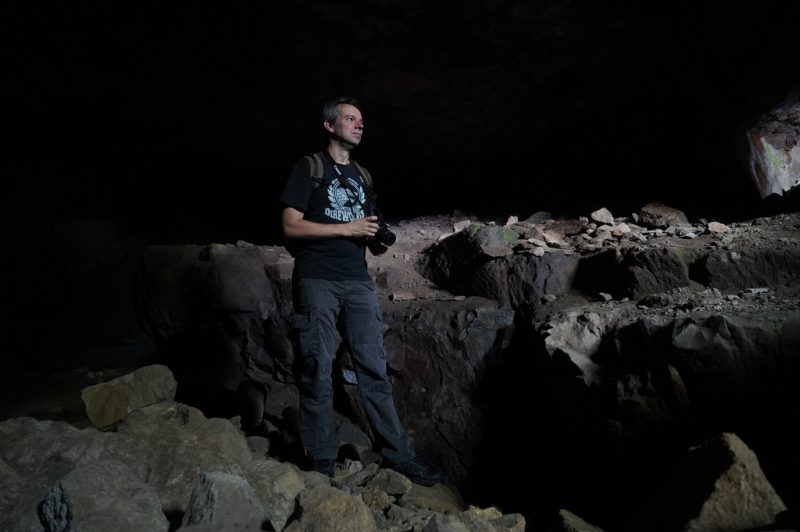 You may be wondering who took pictures of me from inside a small cave, located near the top of a small mountain, on a tiny almost unknown island.

This is my new friend and homonym, David Douglas Stuart!

And now is a good time to tell you a little bit about him.

David is from Australia and is a journalist. Recently, his wife Junko and him, as well as their two kids, have decided to do a trip around the world that should last around a couple of years. And as Junko is Japanese, they decided to make their first stop in Japan. Last March, they arrived on Ogijima almost by chance, and they will be staying there until around July.

I warmly advise you to follow him online there: 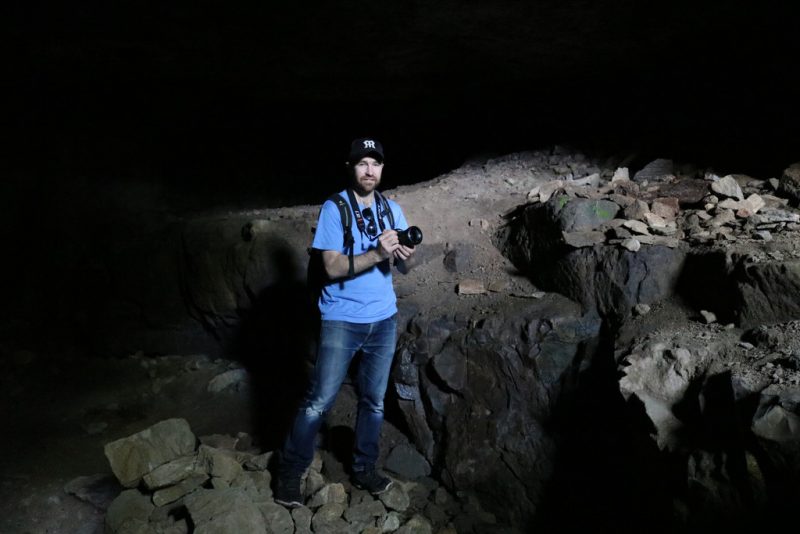 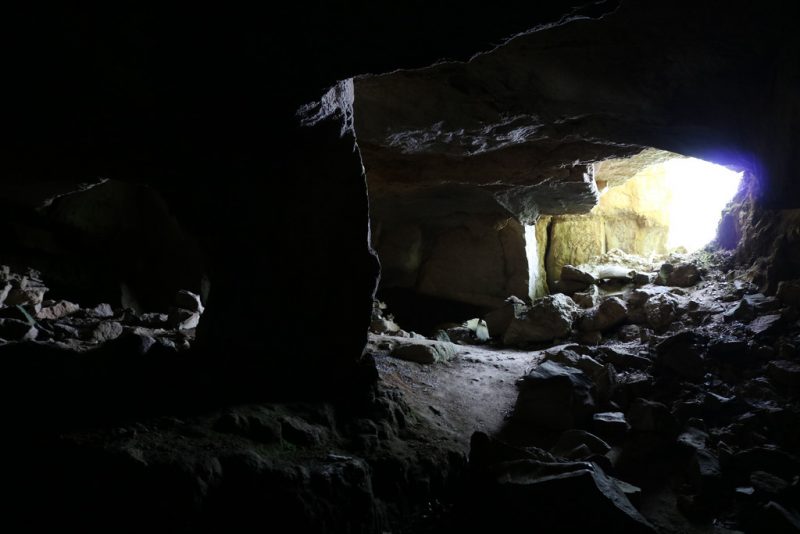 Leaving the cave, we continued our trek through the treacherous and sometimes steep paths of Ogijima’s mountain and headed to the famous Tank Rock (well, famous on the island at least).

It is a rock formation that’s pretty unique on the island, and that one day reminded someone of a tank… I guess it was someone who was quite influential on the island as it became the rock’s official name.

I’m sure this rock (and all the little rocks underneath that seem to have fallen from the big one) are quite interesting if you have knowledge in geology, but this is not my case, and that may be the reason why I took me 10 years to finally reach it.

So… This is a big rock, located near the top of Ogijima’s northern “peak.” Nothing out of this world (well, I’d like to have the second opinion of a geologist about it), but its location is what makes it interesting in my eyes, as the view from there is even more spectacular than from the observation deck: 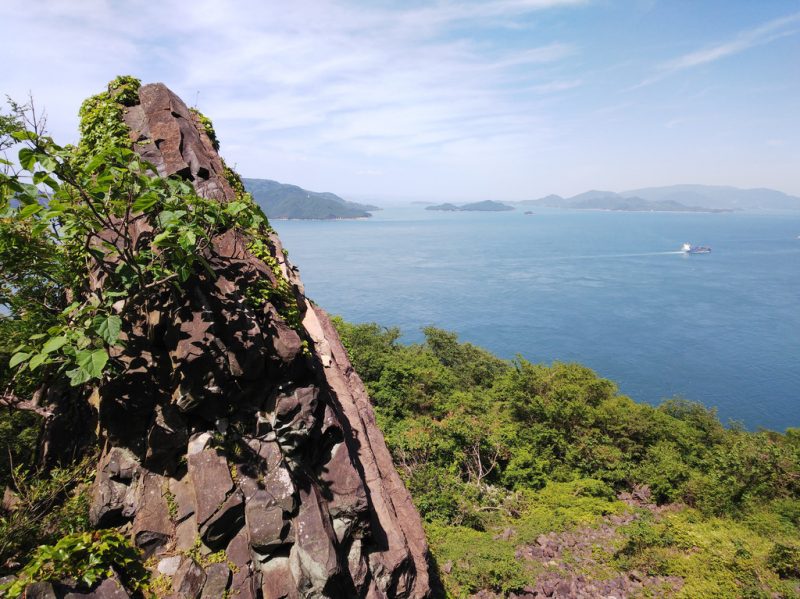 I have a few more pictures, but apart from one or two taken with my phone, I suffered a big fail for the other ones. See, in the cave, I tried to shoot a few pictures in manual mode (still learning all the secrets hidden in my new camera, and it’s taking a bit longer than expected), but once back outside, I forgot to put the ISO sensitivity back to a low level for daylight. Big problem! I tried to fix a few pictures with the computer, but the result is not the best. Usually, if I mess up a picture, the chances that it ends up on the blog are close to zero, but this time, as it may take a few more years to return to the Tank Rock, I had to keep them… 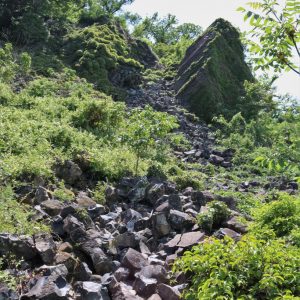 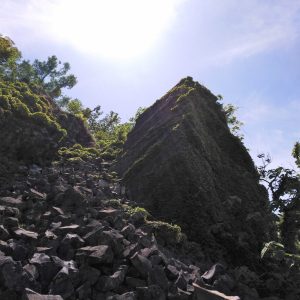 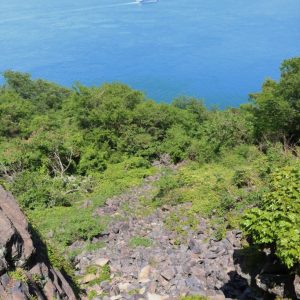 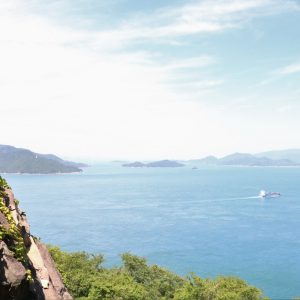 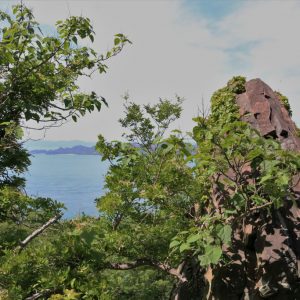 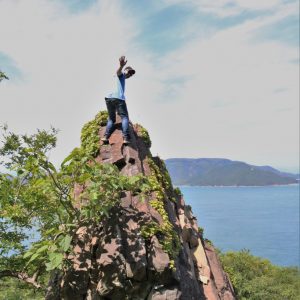 OK, that’s pretty much all for today.

Stay tuned for a few more reports from the Spring session of the Setouchi Triennale coming soon.