Before the Setouchi Triennale, Ogijima was “famous” (locally only) for one thing and one thing only: its daffodils. At the end of winter, like everywhere else, the island’s daffodils are in bloom, and they do attract a lot of visitors from Takamatsu.

Nowadays, as the island is really re-awaking, a bunch of small events are being held, mostly a market where islanders sell delicious homemade and locally produced food.

Honestly, I don’t care a whole lot about daffodils (the northern side of the island gets really beautiful though) but any excuse to go to Ogijima is a good excuse, isn’t it?

Here are a few random pictures and comments from my latest trip there (the first one of the year) last Sunday: 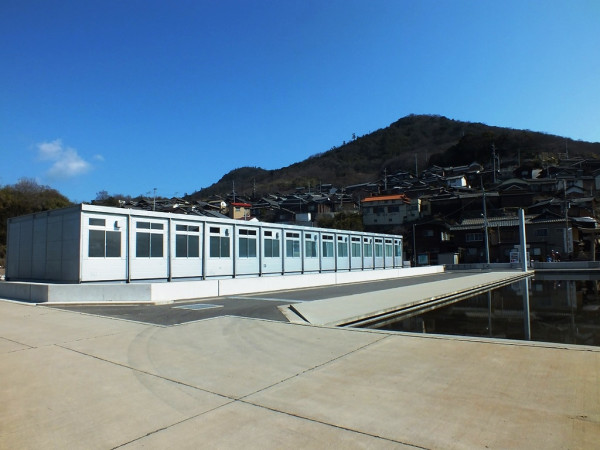 First things first: there is a new building being built on the port, right next to Ogijima’s Soul! It’s not the most beautiful thing, but it’s temporary (one or two years I think) and while it’s aesthetics is not the best, it’s importance is more than significant. I may have mentioned it before but in the coming weeks three families, with kids, are moving to Ogijima (not us… yet?) which brings the number of kids living on the island to 11! Enough to reopen the school that closed 4 years ago.

It wasn’t an easy thing to attain. The local government wasn’t too eager to spend money on the project. It was a hard fought battle for Ogijima residents and lovers, however, the killer argument was that Takamatsu and Kagawa accepted to host the Setouchi Triennale four years ago in order to revive the islands, so not letting the school reopen would be contrary to that and the Triennale would be pointless then.

The thing is that the school must follow the current seismic norms and for that needs some renovations that will be made during the year. As a direct consequence, the building won’t be usable for a few months, so it is a temporary school that is being built in the port right now so that on the first week of April, school can actually start again on Ogijima.

So yes, the school reopening is huge and exciting news. It is one of the keys to have Ogijima’s population grow again and get younger. And I’m glad to see that even if it’s “troublesome” the local government is keeping its word and is investing in the future of the islands. 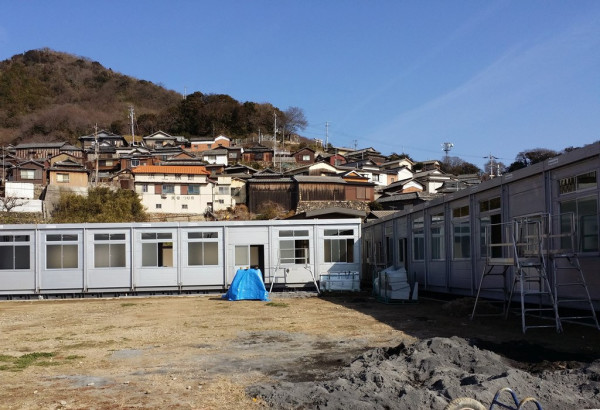 We had lunch at the port’s market. Most of the food was locally produced as usual: 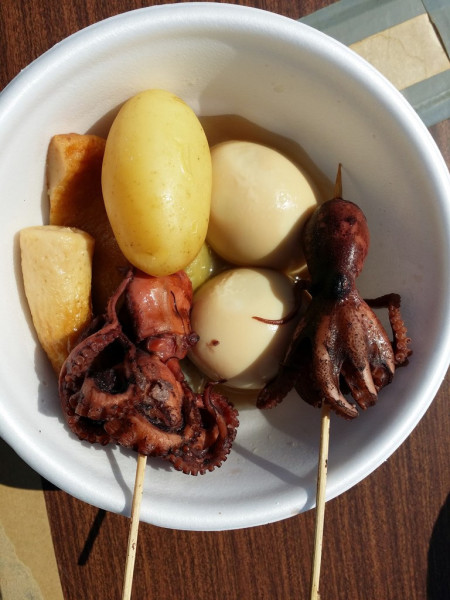 “sea oden” (my appellation) with small octopus instead of meat… Delicious. 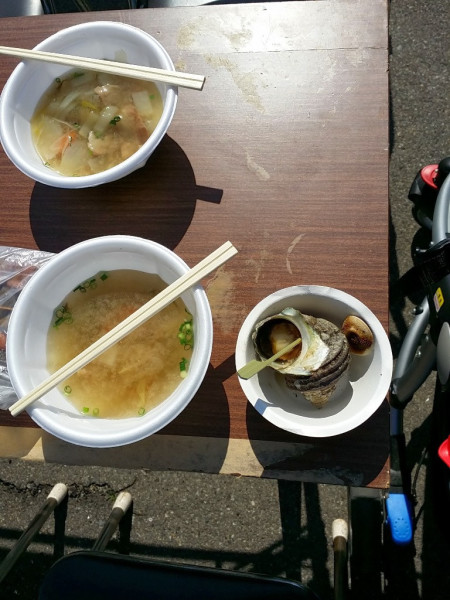 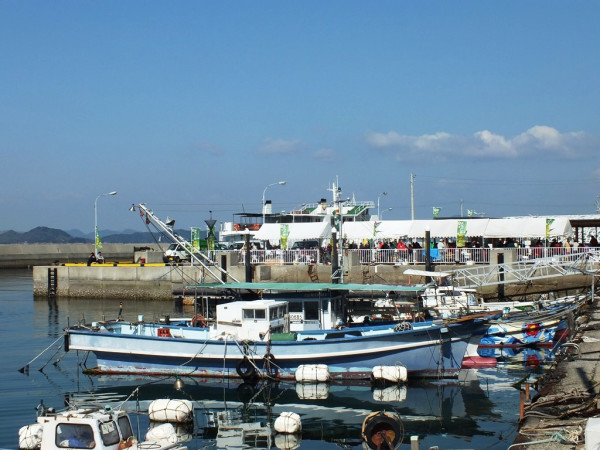 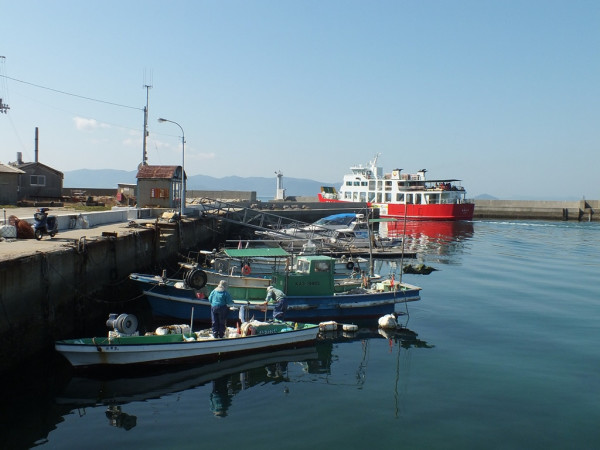 Ogijima’s daffodils on the northern side of the island.

There are also two big fields somewhat in the center of the island, but it’s a pretty steep climb to get there, and Hana is a bit too young to climb it (and she’s too big for us to carry her all the way. 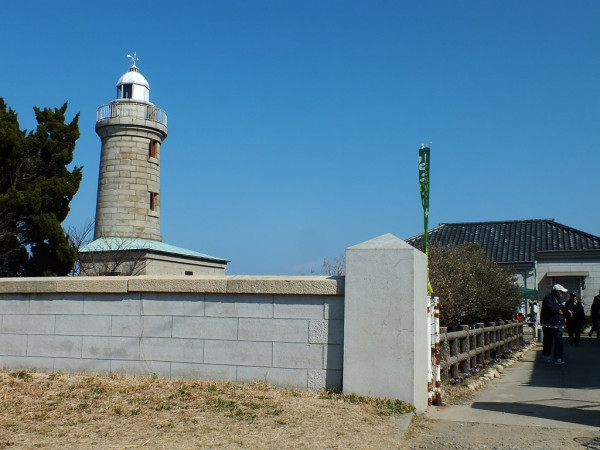 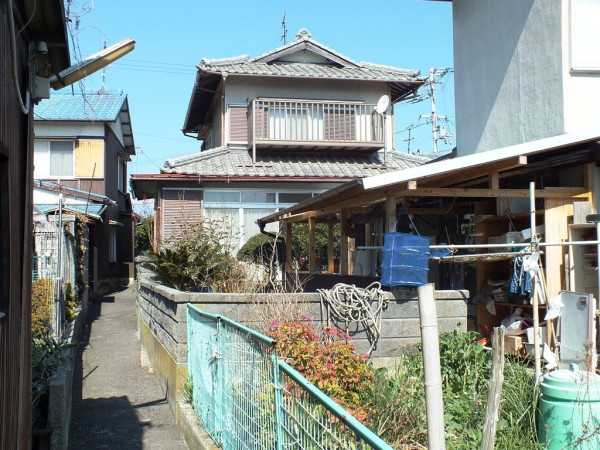 A street of the village where I hadn’t been before (yes, there are a few left) 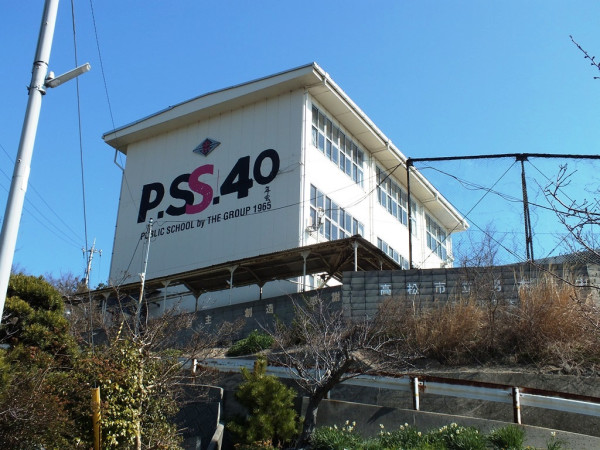 P.S.S.40 project is over, but the sign is still up there.

I realize that I never talked about it in detail here. The thing is that it was supposed to be more or less permanent, but with the reopening of the school, it had to be dismantled. I’ll still talk about it anyway sooner or later as a retrospective, because it was very interesting and fun (I think I visited it five times over the three sessions of the Triennale last year). 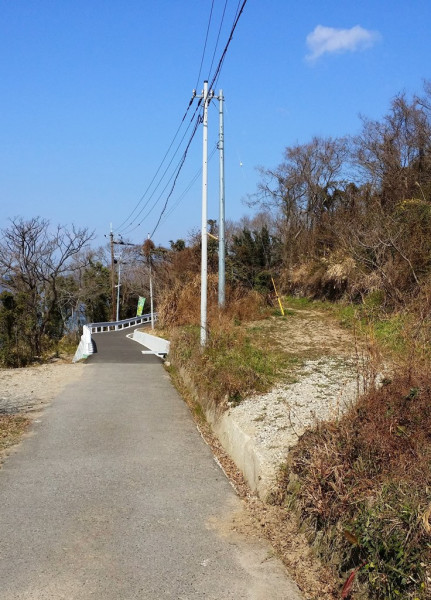 The road to the lighthouse – that had been damaged by a landslide caused by a typhoon back in 2011 – has finally been repaired! It took a while, but once again, it’s nice to see the local government not forgetting the island (or remember it exists?) On the right side of the previous picture, we still can see traces of the path that replaced it for more than two years. 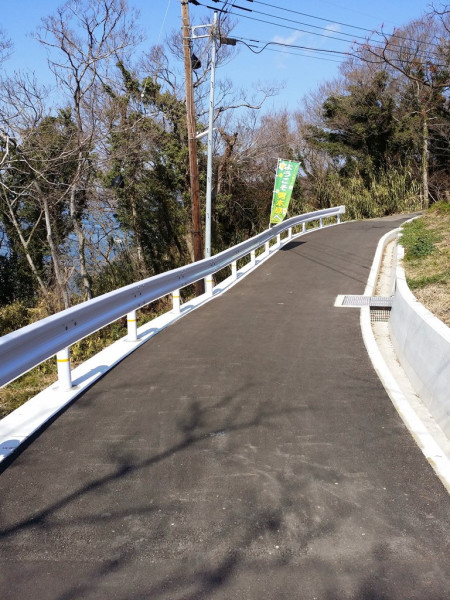 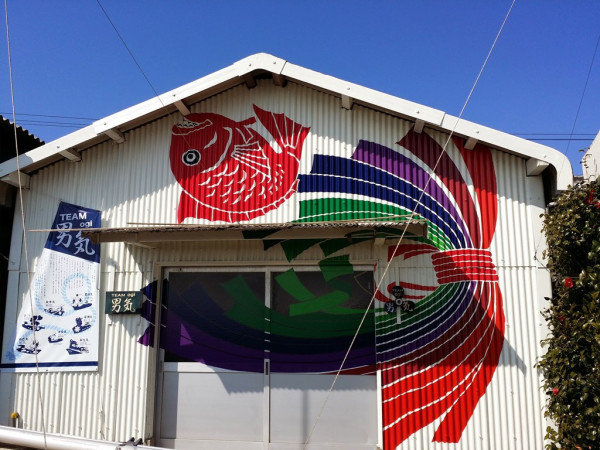 Wondering if the large artworks located in Kō on Teshima were visible from Ogijima, I took my camera, zoomed and took a couple of pictures. Can you spot Big Bambú (I really need to show it to you in detail soon) and Beyond the Border, the Ocean on the pictures above (click on them to see them in their regular size)? 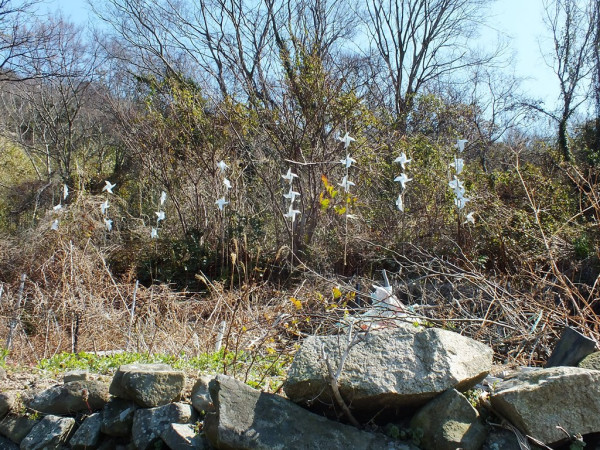 Those paper windmills mark where the wild boar fence has been installed (can you see it?)

A couple of years ago some wild boars arrived on the island (if you wonder how, they swam… from Yashima or Teshima) and they have been quite a nuisance, especially to the various crops and gardens. Also, as most of the people of Ogijima is pretty old, they can be quite dangerous. Because of that and the fact that they proved pretty hard to capture (but it’s not impossible, hence the wild boar soup sold at the market), a fence is being installed between the village and the rest of the island. Not the best of solutions, but it’s better than nothing at the moment.

That’s it for this trip to Ogijima. More to come soon.