During the Spring session of the Setouchi Triennale 2019 that just ended, many people asked me details on how the Three-Day Ferry Pass worked. While I always try to answer personal e-mails in a timely manner, having the information here on the blog, is always a better option for both you (faster) and me (fewer e-mails to respond to means more time to write new content).

As a matter of fact, before we get to the heart of the subject, let me remind you of the existence of these three pages on the site:

May I advise you to bookmark them if you’re planning to visit the Setouchi Triennale.

OK, so, today we’re here to talk about the 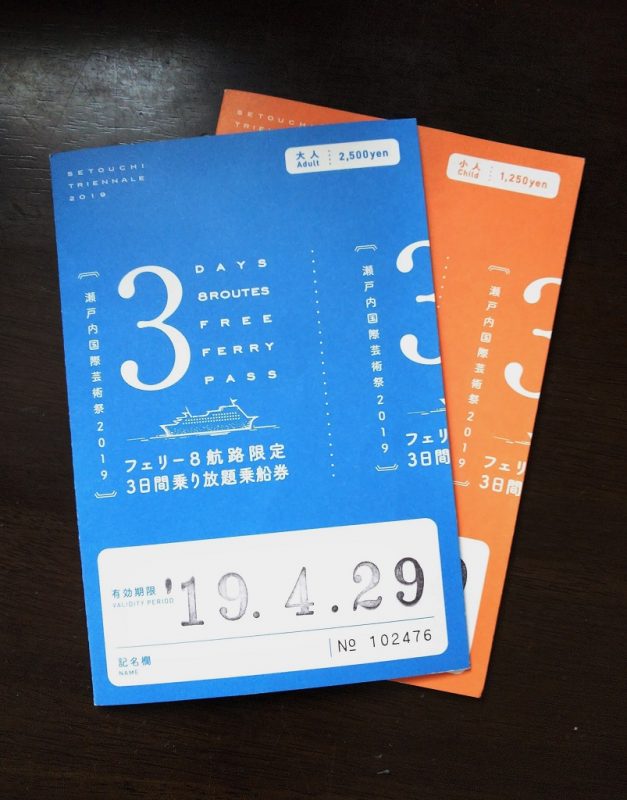 As you can see the one for adults costs 2,500 yens, whereas the one for children costs half-price, 1,250 yens.

You can buy it at any ferry ticket counter that takes part in the Setouchi Triennale (in any of the ports mentioned below) as well as at the Triennale information centers of Takamatsu Port, Uno Port, and Tonosho Port (on Shodoshima).

The ticket is valid for three consecutive days starting on the day you buy them. For example, as you can see above, I bought it on April 27th and it was valid until April 29th included.

Routes and Ferries covered by the Three-Day Ferry Pass 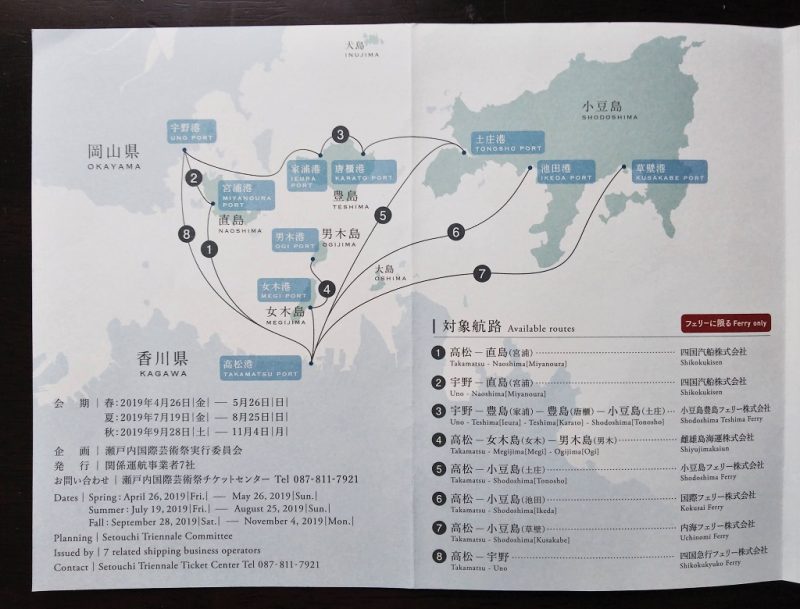 Most of the confusion from the people who contacted me about the Ferry Pass came when dealing with which route the ticket covers and which ones it doesn’t. Well, things are actually pretty well done this year, as the routes (and timetables, see next picture) as included in the physical pass.

To make sure things are clear. First of all, this Three-Day Ferry Pass is only valid during the Setouchi Triennale itself. That is during its three seasonal sessions:

Concerning the routes that are covered, let me clarify a thing that is sometimes confusing for people who’ve never been to the Setouchi area.

There are two types of ferries that go back and forth the ports and islands (or sometimes between islands). The regular ferries and the passenger / high-speed ferries.

The regular ferries are big ferries that can carry several hundred passengers as well as motorized vehicles of all sorts (including big trucks for some of them).

The only ferries that are included in the Three-Day Ferry Pass are the regular ferries!

Not the passenger / high-speed ferries.

In details, it means that the eight routes included in the ferry pass are (you can follow with the map above):

It needs to be noted that no boat between Takamatsu and Teshima, or between Naoshima and Teshima as well as no boat to Inujima is included. So keep that in mind when you prepare your trip (but while it takes more time, if you’re on a budget you can still reach Teshima from Takamatsu via Uno Port or Tonosho Port). The boat to Oshima is not included either, but that is because this boat is free.

In other terms, the Three-Day Ferry Pass is very useful to go to Naoshima, Ogijima, Megijima, and Shodoshima from Takamatsu (I will assume you’re based in Takamatsu for your visit of the Setouchi Triennale, as it’s the more sensible option, as previously explained).

If you need a concrete example, during the Spring session I used it once.

As previously mentioned, the timetables of all these ferries in included in the pass, which is a very welcome addition to previous years: 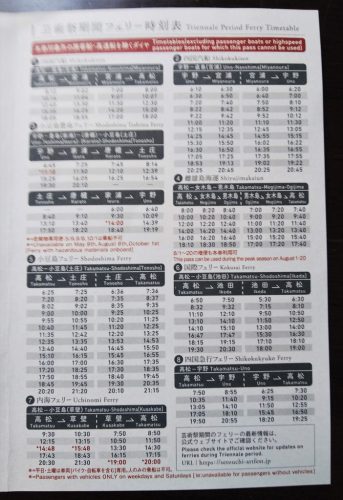 Also, I sometimes get e-mails of people who are trouble finding these timetables, try to go to the official sites of each island (when they exist) and get more confused than anything else. Know that they’re all online on the same web page on the Triennale’s official site, and this is the only webpage I’ve ever used when I want to know the time of a ferry. It’s there.

How to use the Three-Day Ferry Pass

Once you’ve bought your ferry pass, make sure you have it with you when it’s time to use it. As it’s the same size as the Triennale Passport, most people carry them together around their neck in a “passport holder” that you can buy in the Triennale’s official shops. It’s both the safest and most practical way to carry your various tickets around while visiting the islands, and the one I advise you to use.

The important thing to be aware of is that while the Three-Day Ferry Pass allows you to avoid the lines at the ticket counters, and makes your three days of island hopping cheaper, it is by no means a priority pass, and you’ll still have to wait in line to board the various ferries.

Then, when it’s your turn to board the boat, just show your pass to the person in charge of collecting the tickets.
There’s one exception for this. If you’re going to Megijima or Ogijima from Takamatsu, you need to give your ticket or show your ferry pass when you disembark the ferry, not when you get on board (the other way around, from either island to Takamatsu, it’s the regular way).

And that’s pretty much it. Quite simple, isn’t it? 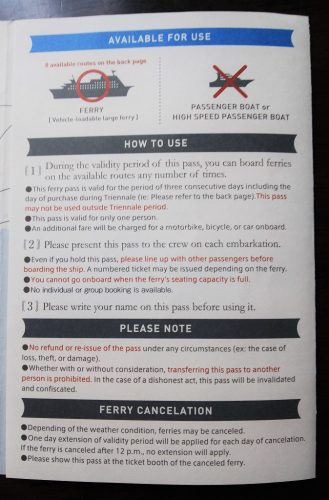 The last page of the pass carries a few more pieces of information:

I guess that’s pretty much it.

I hope this helps, and if anything is not clear or have any further question, please do not hesitate to contact me, and I’ll try to answer to the best of my knowledge.

This post is part of Setouchi Explorer’s FAQ that answers the most common questions readers have about the Setouchi Triennale, Takamatsu, Kagawa Prefecture and more…