It has started! On Friday, April 26th.

I mean the Setouchi Triennale 2019, of course.

However, as it was a Friday and I couldn’t escape from work (why didn’t the festival start on a holiday or a weekend as it did the previous years? no idea), I missed that first day and its opening ceremony. Oh well.

Luckily, I had the chance to get a glimpse of a few new artworks on Ogijima a few days earlier, namely Sarah Westphal’s The Sea Within – The See Within with Sarah herself as a guide, as well as the brand new and redesigned Sea Vine by Haruki Takahashi.

Still, my actual first day visiting the Triennale was Saturday, April 27th, and surprisingly, the first island I visited wasn’t Ogijima as you may expect but Shodoshima!

Here is what I saw on that first day.

We took the 9.30 am ferry for Kusakabe and soon enough, I saw my very first artwork for this Triennale 2019:

It wasn’t a new artwork, I actually had “visited” it a bit more than a month before.
It was Stone’s Island Stone by Hideyuki Nakayama. 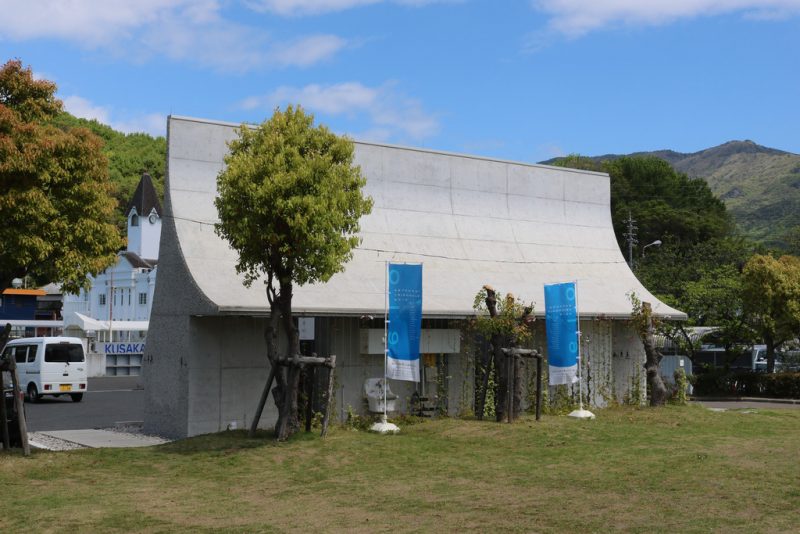 This building is actually a public toilet! Its particularity is that it was built using stone from the island exclusively as a reminder that Shodoshima used to provide the stones for many of the ancient castles of Japan, most famously Osaka Castle (and maybe even Edo Castle, although I need to double-check my information here). I don’t find the building amazing or anything, but it’s not ugly either and it serves its purpose. 🙂

Oh by the way, here is my first tip for this Setouchi Triennale (I mean, on top of all the tips I’ve already given, be it on this informational page or the FAQ). I just mentioned that I arrived on Shodoshima at Kusakabe Port, not its main port, Tonosho. The reason is that the boats for Tonosho were pretty much full. The boat for Kusakabe? Just a little bit more crowded than usual. Same goes with the boat to Ikeda. So, remember, there are three main ports on Shodoshima, take full advantage of this. Also, you don’t have to arrive and leave at the same port, that gives you more leeway when planning your day.

After the art stop, we headed to the first new artwork. It wasn’t very far, it was right on the other side of the street (right behind me on the previous picture).

It is The Shore Where We Can Reach by Xiang Yang.

It’s an ongoing project that should not be completed before the summer, but it already looks amazing.

Right now, it’s composed of three parts. First, an exhibit with drawings, CG renderings, models and a video explaining the whole project. There’s also a big tower made of old wooden furniture, and finally a part of the final construction. That construction, when finished, will be a 27-meter long boat that should be all sorts of amazing. I really can’t wait to see it, and of course, ride it. I assume that it will be possible.

And in a stroke of luck, Mr. Xiang arrived shortly after me. He was part of an official tour, so I didn’t dare to bother him too much. Still, he was kind enough to give me his contact information and pose for me. So, I think it’s not unrealistic to expect more information about his project soon, and hopefully a future meeting this summer. A planned one this time.

We left soon after and had lunch at Shodoshima’s Olive Park. I should talk about it one day… or not… It’s probably the most famous tourist spot on the island, it’s full of olive trees and a Greek windmill (already featured on the blog), I’m sure it’s very easy to find information about it on the web.

After lunch, direction Nakayama for one of the most famous artworks from Shodoshima, I mean, Wang Wen-Chich‘s bamboo house.

As it’s redone with a different design every three years, this year, it’s called Love in Shodoshima and it looks like this when you approach from the north-east: 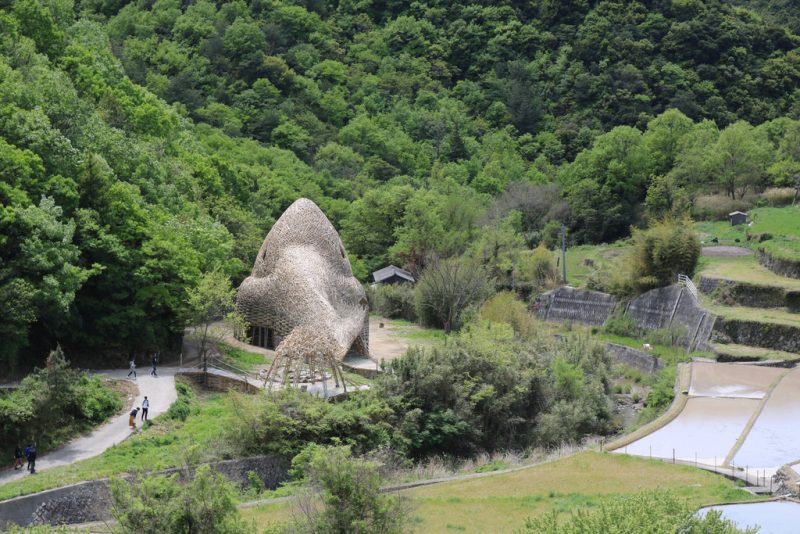 Notice that the rice fields are starting to be flooded. As a reminder, the location of the artwork is at the bottom of Nakayama’s “Thousand Rice Fields” some of the few terraced rice fields of the area. In other words, late Spring and early Summer are the best time to go to the area. 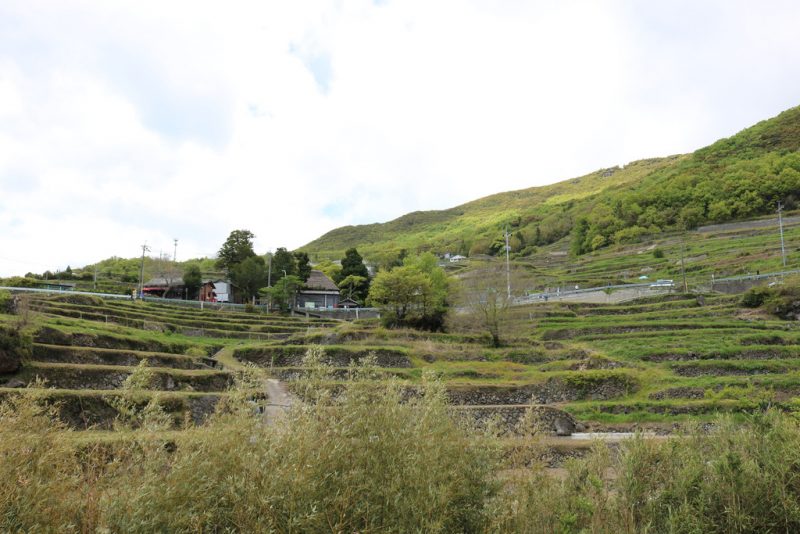 The inside of Love in Shodoshima looks like this (this year, it even has an entrance and an exit, which means a little more to explore):

A few more shots from the outside: 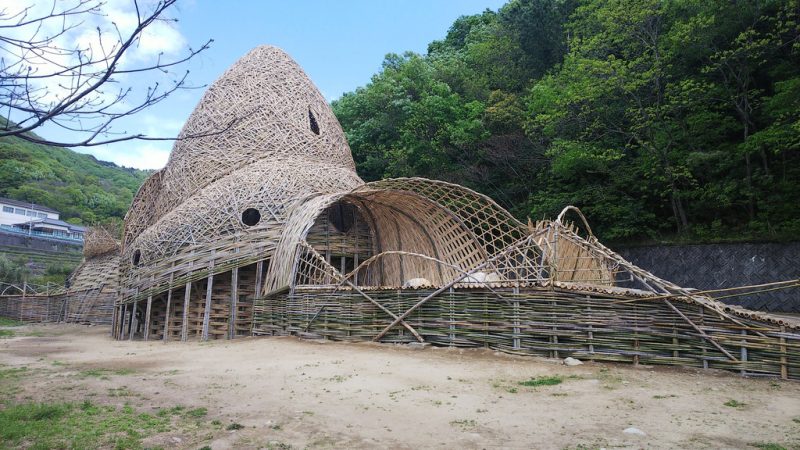 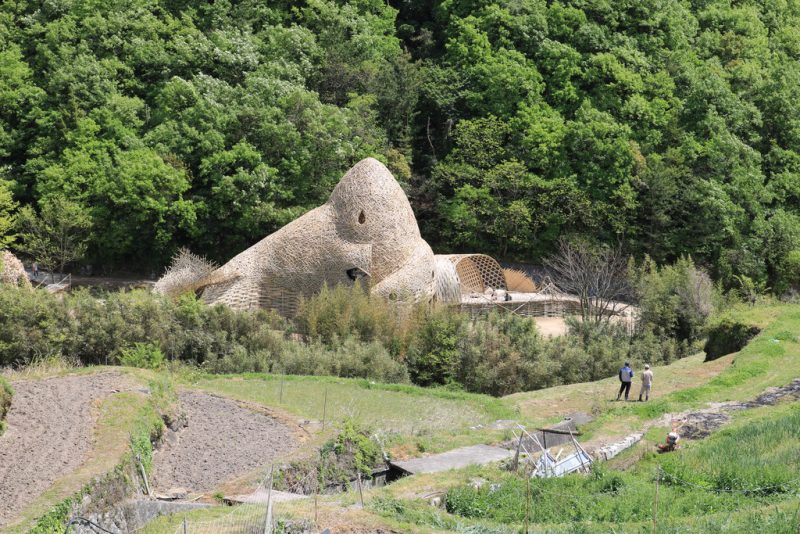 Oh and I forgot to mention another chance meeting. As we were walking on the road towards the rice fields, I noticed a man with a familiar looking face wearing a familiar looking hat who was walking towards us, and then with us down to the structure. It was Wang Wen-Chih himself!

It was the first time that I met him, and knowing that he didn’t speak English and I obviously don’t speak Chinese, we didn’t exchange more than a few politenesses in simple Japanese, when suddenly, hearing me speak with my family, he started a conversation in… French!!!

We didn’t speak much, because he was heading there to meet with… the same group that we met earlier, the one with Xiang Yang, but he was as nice as I heard he was. He even made a point in saying goodbye to me when leaving. Thank you, Mr. Wang, it took us nine years, but I hope our paths cross again. 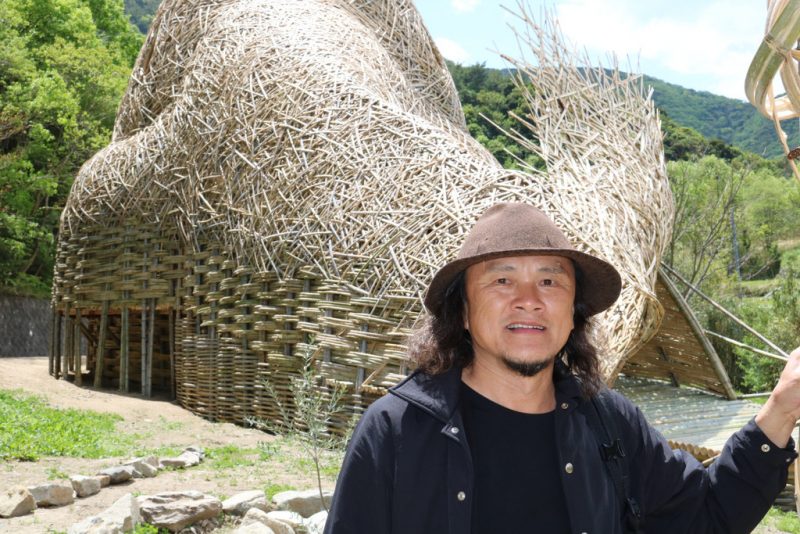 Our next stop was Hitoyama, about two kilometers downhill. The village has had amazing artworks in the past, but this year was a bit of a let-down. First, there is a veteran, Shishigaki Island by Masato Saito. Honestly, this year I didn’t even bother going nearby, so this is the only shot you’ll get. I just don’t really care for it: 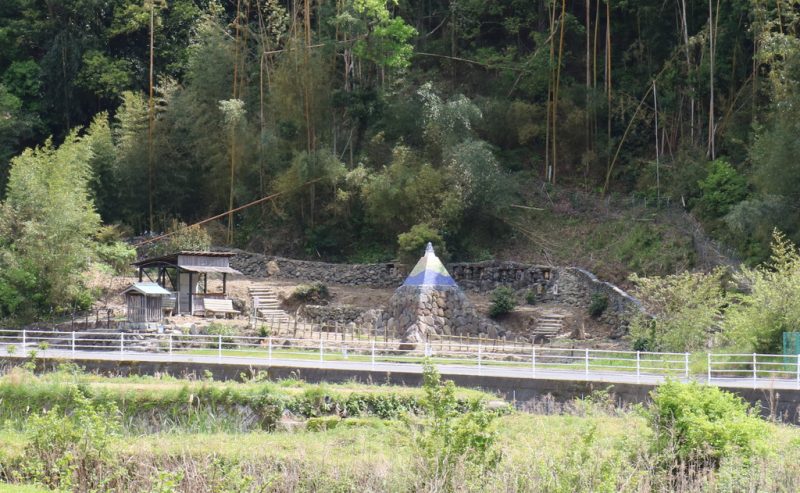 There’s also a new artwork, Fluire by Giacomo Zaganelli. It’s located at the old school’s swimming pool, and it’s a bunch of plants in pots around the pool.

It’s nice… I guess… Maybe… Honestly, I’m not too sure what the artist is trying to do there. Maybe it would look nicer if the pool grounds had been renovated at first. Or if the plants were more “settled” in their pots (they’ve been planted a couple of weeks ago at the earliest – I was on site mid-March, there was nothing yet). So, maybe it’s a permanent or long term project, maybe it will be great once the plants have had more room to grow and make the place their own. But can this happen as they’re constrained in pots? They’ll need constant human intervention to just survive. Maybe the locals will do it. Maybe, I’ll see it again in the Fall to see if it has changed. Maybe.

Next, we headed to Shodoshima’s north coast, more precisely the village of Obe, where one of the new artworks I’ve been the most eager to see was waiting.

But before that, we saw an old artwork again, Kohei Takekoshi‘s Shodoshima Tree.

Some people may not call it art. I’ll let you decide, but whatever your choice, it’s impressive nonetheless. Mr. Takekoshi found the stump of a very old tree that had been uprooted and had recently died (I’m not sure of the cause). He dug all around it, until all of its roots where exposed, and it turned it into this sort of ready-made installation. Transporting the roots required a large truck, and I suspect that the building where it is exposed had to be built around it.

In any case, I love it. It gives the feeling to be underground if the ground was invisible. However, all the previous times I’ve seen it, the room was quite dark, it was hard to perceive the details, and it looked perfect. This time, not sure if it was because it was sunnier or if they changed the windows, but there was more light than I’d like.

Also, I’m still learning how to use my new camera (I’m going very slowly mostly from lack of time), and while it’s great and quite impressive in very low light, there, pictures came out not dark enough (I have yet to learn how to shoot manual, which I should have done there – I could also have edited them, but I try to only edit pictures when really necessary). 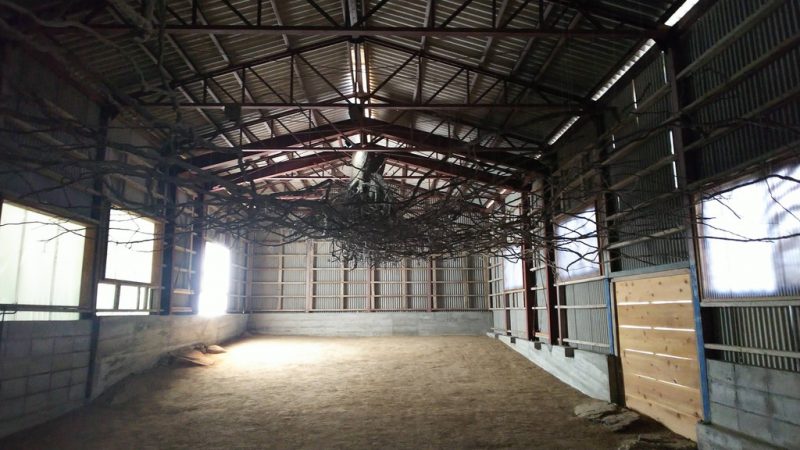 Another artwork created by nature, a wasp nest, waited in the garage next door! Luckily it was abandoned: 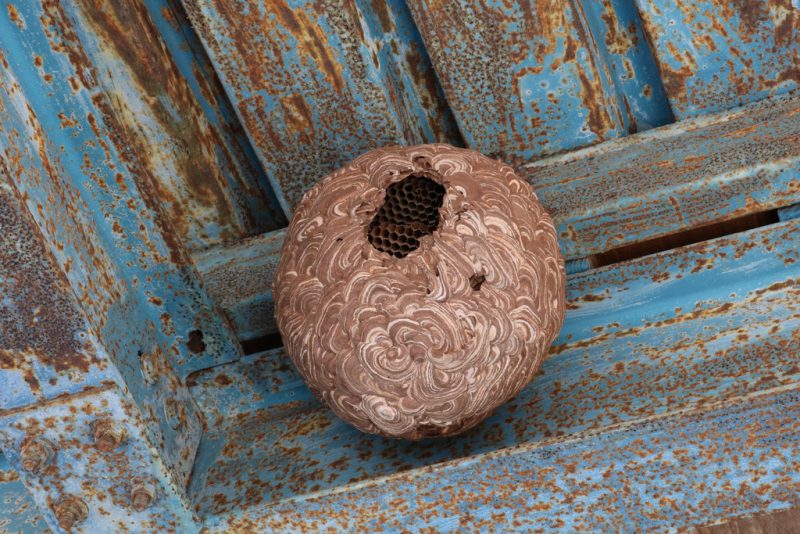 Finally, we reached our final destination, Lin Shuen-Long‘s Beyond the Border – Wave.

This new artwork is located on the same beach as Tide, but it starts very differently, with a “tunnel” behind the building next to the beach: 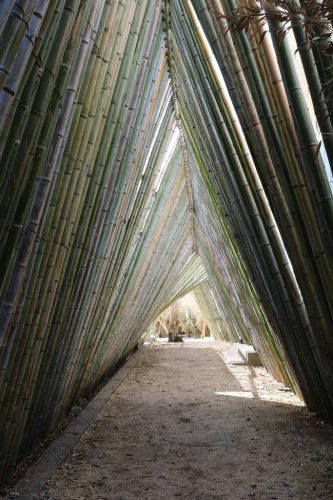 Soon, the tunnel turns into a path in the middle of bamboo leaves:

And finally gives way to the main structure: 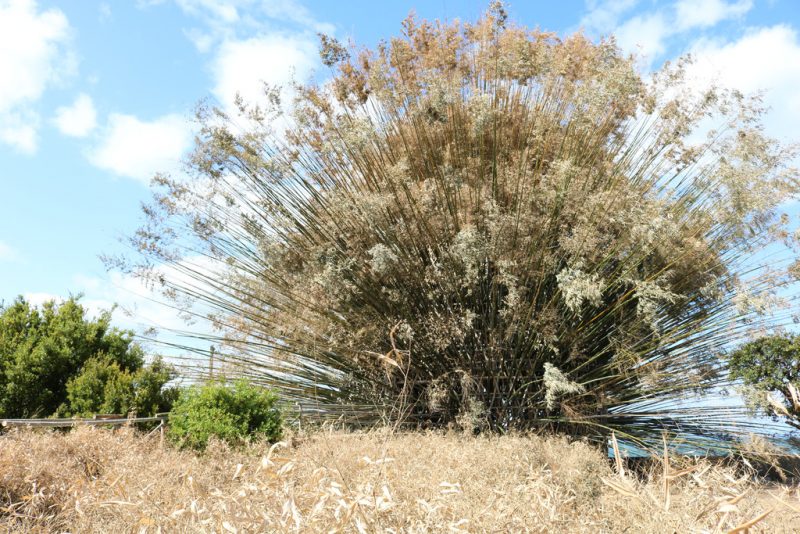 A giant “ball” of bamboo, a sort of temple representing Shodoshima’s connection to both the land (the core of the structure is of the shape of an olive pit) and the sea (its general shape being the one of a sea urchin).

And just like a temple, you can enter it, and it even has an inner sanctum that you only discover while venturing inside.

And there is even another surprise that you can see from the little balcony or when you exit the structure: 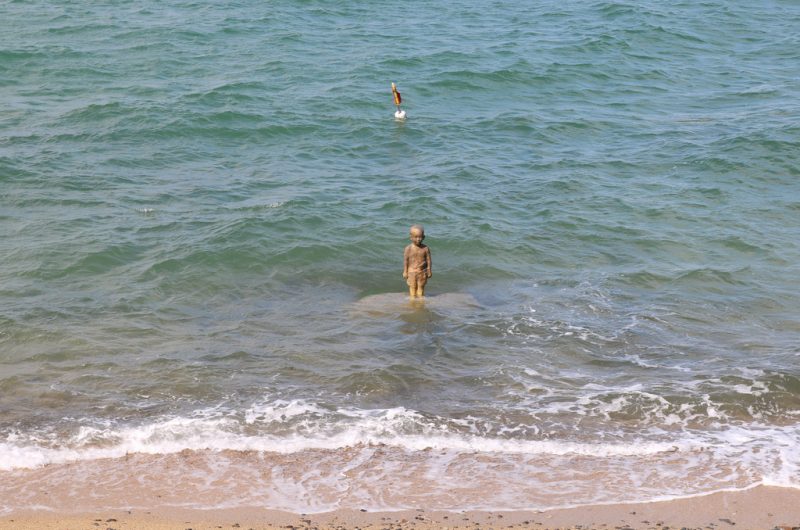 The little boy from Tide is back. Or rather, after the 196 little boys have dissolved into the sea, they wandered around the world for three years before all merging into this one golden boy who came to pay his respect at this new temple. 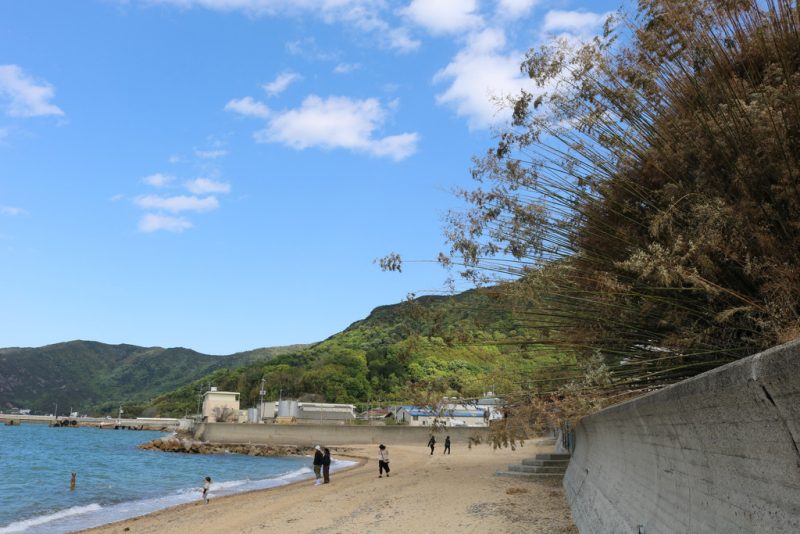 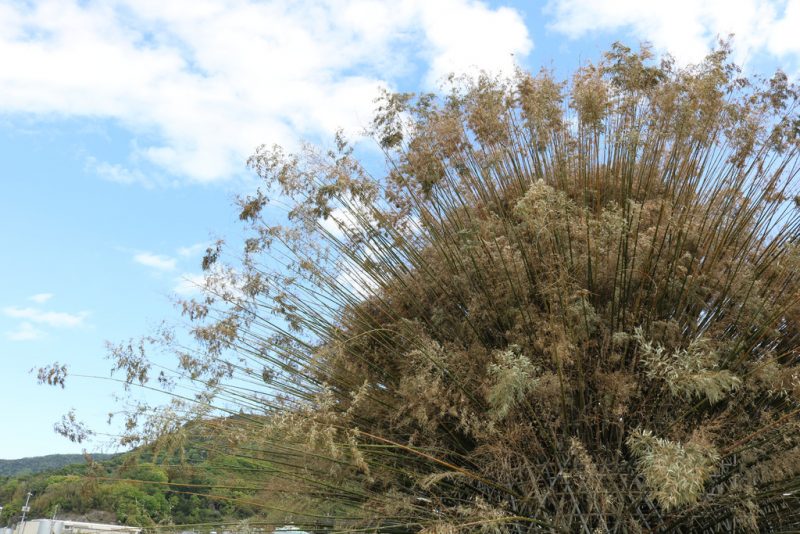 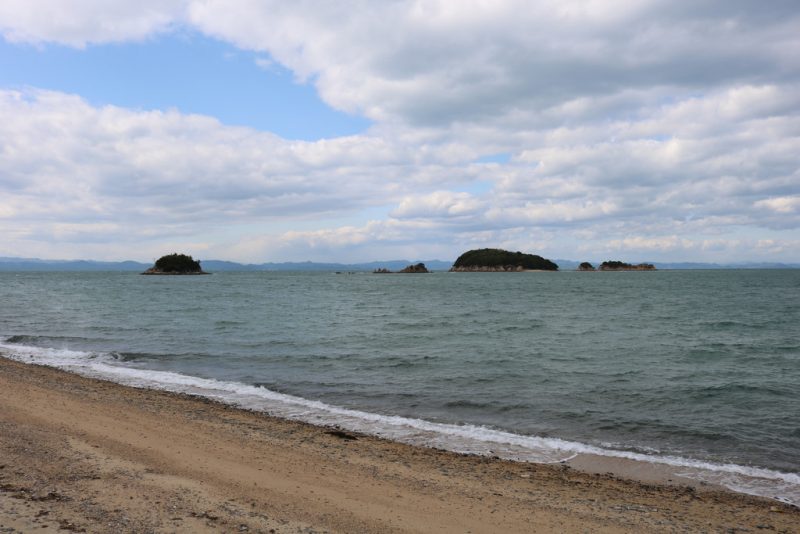 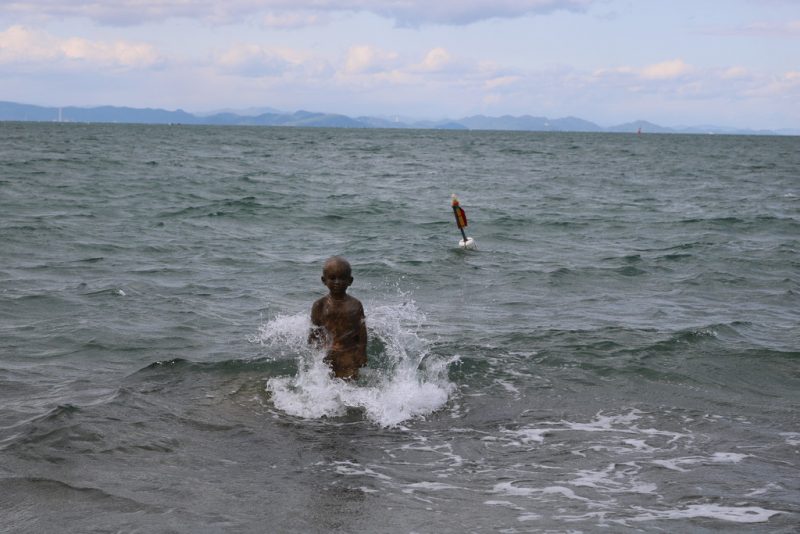 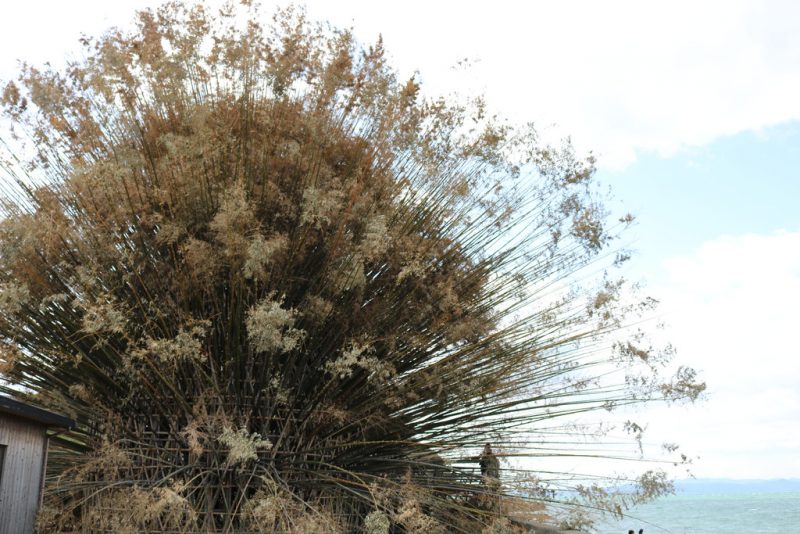 Oh and once again, I got to meet and spend a little time with Lin Shuen-Long. This time it wasn’t a chance meeting. We have been in touch recently (expect an interview very soon!) and he knew I was coming. And guess what? He speaks French too!

Thank you, Mr. Lin, for your time, and for the amazing artworks you gave us these past six years. 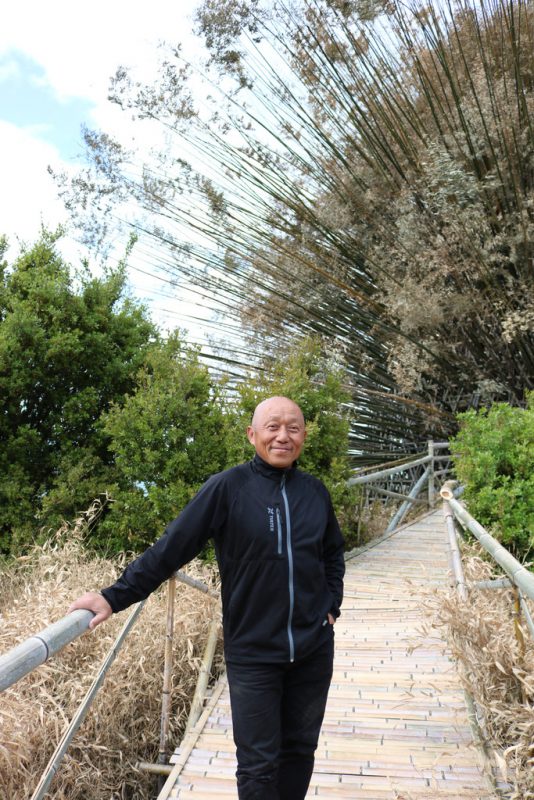 Finally, it was soon time to return to the ferry. However, when you’re in Obe, on the north coast of Shodoshima, and that your ferry is on the south coast, in Ikeda, you have two choices,  to go around the island, which can take some time, or to cross the island through its center, and through its mountains, which allowed us to stop at the top of its famous Kankakei Gorge:

That’s all for today. Be ready for part two of my Setouchi Triennale 2019 reports, with Ogijima.