I probably won’t make a day to day report of my visits on the islands for the Setouchi Triennale 2016 (I’d like to, but I simply won’t have the time and/or energy, see, this post about last Sunday is being posted on Tuesday night), but I’ll try to post as much as possible possibly in a timely manner.

Let’s start with what happened last Sunday, that is the opening day of the Triennale!

And of course it started with a very official and very serious ceremony (although, due to its multi-location nature, kick-off events for the Triennale took place at many different locations at many different times). 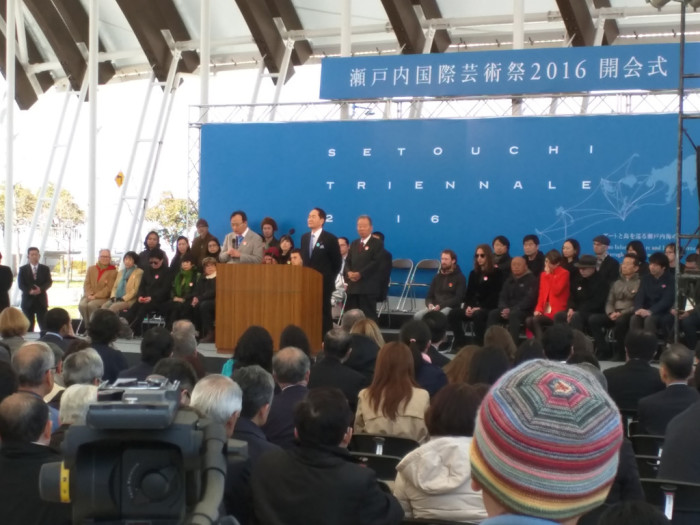 These kinds of ceremonies are not really my cup of tea (no, I wasn’t invited by the way, I was just watching in the distance) and I only stuck around because I noticed James Jack in the group of artists sitting on the stage and I wanted to say hi.

Apart from him, we had the big honchos of the Triennale standing and speaking, that is Fram Kitagawa (the Triennale’s director), Keizo Hamada (Governor of Kagawa Prefecture) and Soichiro Fukutake (head of Fukutake Foundation and Benesse Art Site, as well as the Triennale’s co-director). Among the artists, I could recognize Takeshi Kawashima, Lin Tianmiao, Regina Silveira, Junko Koshino, the Snuff Puppets (with whom I chatted a little afterwards), Sputniko, Lin Shuen Long, Wang Wen Chih, Parco Kinoshita, Sumihisa Arima and James Jack (who introduced me to Yume Akasaka whose work three years ago was one of my top favorites, and I think she’s returning with the same one – and as she’s fluent in English, I’ll try to interview her for the blog).

When the festival was officially open, and that the crowds in Takamatsu Sunport started to disperse in smaller groups heading to their respective boats and ferries, it was also time for me to head to another, less official, but much more fun ceremony, on Ogijima – where else?

I should have taken pictures of Sunport at that moment, or rather film, the atmosphere was electrical, unique. You had the visitors, very numerous, very excited, very happy. Koebi-tai members (all the volunteers who help with so much and without whom the Triennale wouldn’t be possible), excited to be there again for the veterans, a bit stressed and almost overwhelmed for the newcomers. Officials and artists who for the most parts formed small groups heading in various directions (restaurants, private boats, and more). Some small events were taking place near the ferry piers. Etc.

Once on the island, I could notice a similar division of people: veteran visitors, first time visitors, family and friends of the people on Ogijima, and even a very official group that I ran into later in the afternoon. I have no idea who they were, but there were some very serious bodyguards positioned at the periphery of the group, something’s telling me that they weren’t there for the art.

So a very full Meon led us to Ogijima (which also was very full), and as soon as the ferry was gone, it was Ogijima’s opening ceremony that could start with its Team Ogi‘s “boat dance.”

Just like three years ago, the boats from Team Ogi recreated a very old Ogijima tradition (or rather a Setouchi fishing tradition). Back in the days when boats returned to port with a much larger than usual catch, flags were deployed, bells, drums and whatever could make some sound was hit and rung in order to tell the people of the island about it and call them to the port. Since 2013, this tradition was revived with a different meaning: the Setouchi Triennale has started!

And at the end, instead of fish, it was mochis, lot of them, that were given out to the people.

Here are a few pictures (please excuse their poor quality, I hadn’t set up my camera properly and didn’t notice, that’ll teach me not wanting to put it on automatic when there’s an event that catches most of my attention), as well as a small video (with Café Tachi’s Kido-san’s hand and voice as a special guest): 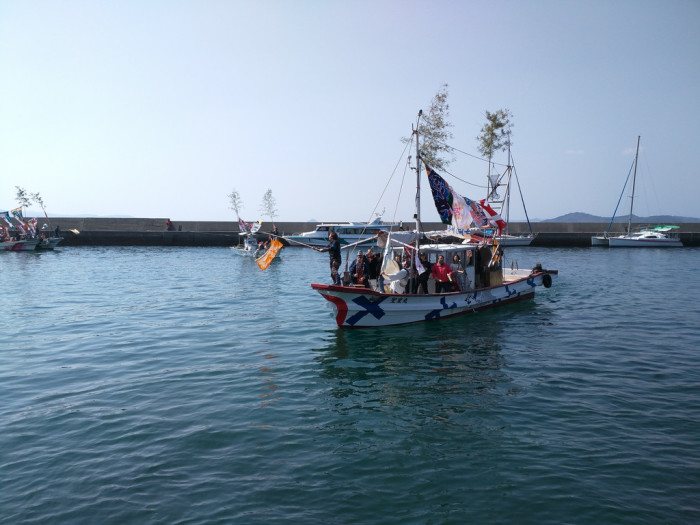 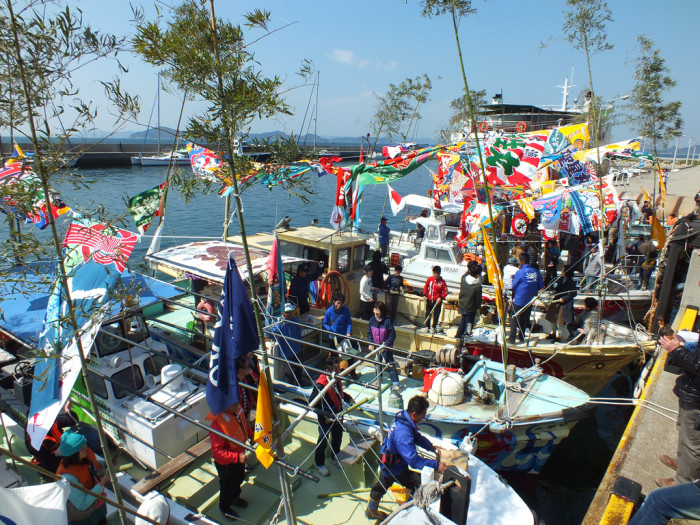 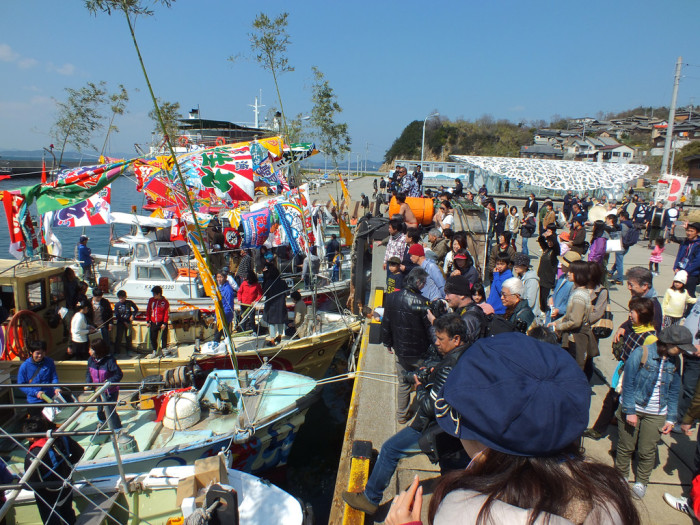 Then, the Seppuku Pistols played a short concert: 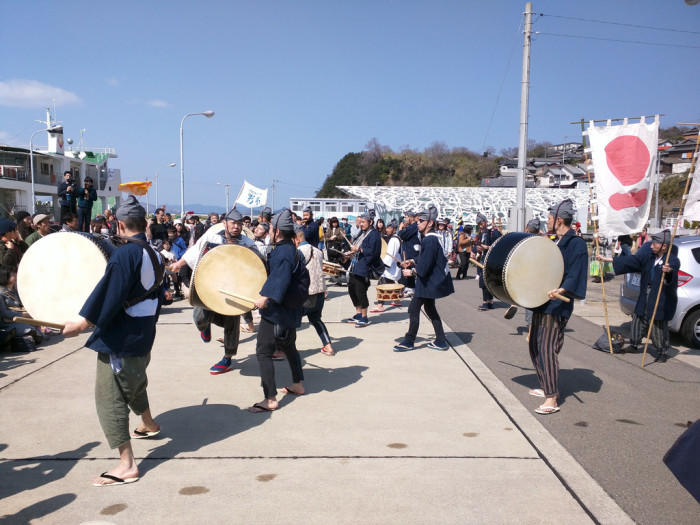 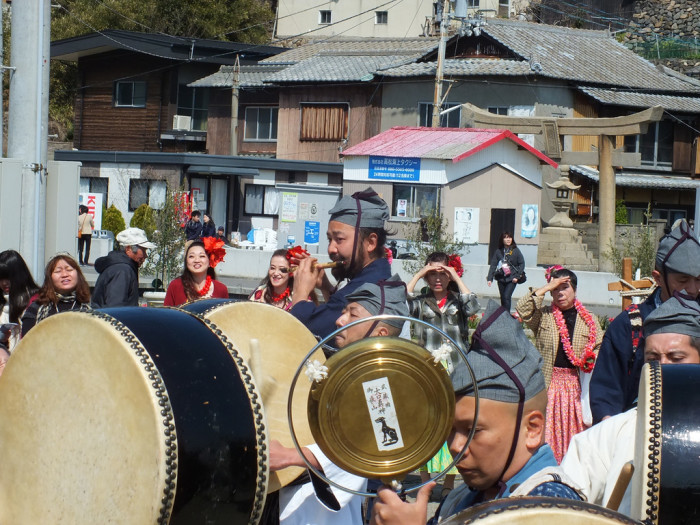 I knew nothing about this band, but they had an intriguing name that didn’t really match the time of music they had played for us. A small search on youtube showed me that this band is truly fascinating, as it’s mostly an odd marriage of traditional Japanese music and… punk music!

As far as the rest of the day is concerned, here are a few pictures that are more or less representative of that day (all in all, I didn’t visit that many artworks, partly because I had seen all the new ones on the previous day, partly because I’ll have numerous occasions to return to Ogijima before the end of the Triennale, especially on days when it won’t be as crowded). 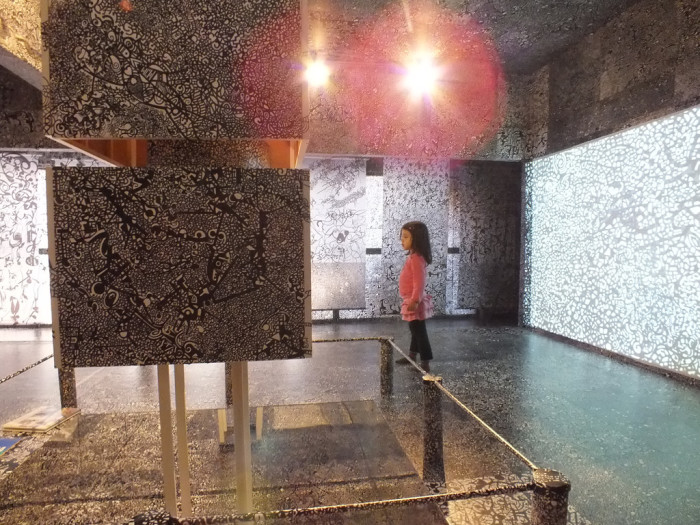 Hana, surprised and confused that her art and the one of all the children that had been there for more than a year was gone. However, once I explained to her, she understood, and she liked this Kaleidoscope Black & White. For the occasion, I also finally met Takeshi Kawashima without him having to turn his back on me.

I hadn’t seen Memory Bottles in quite a while. It was the perfect occasion:

And the Room Inside of the Room is quickly becoming a favorite of mine: 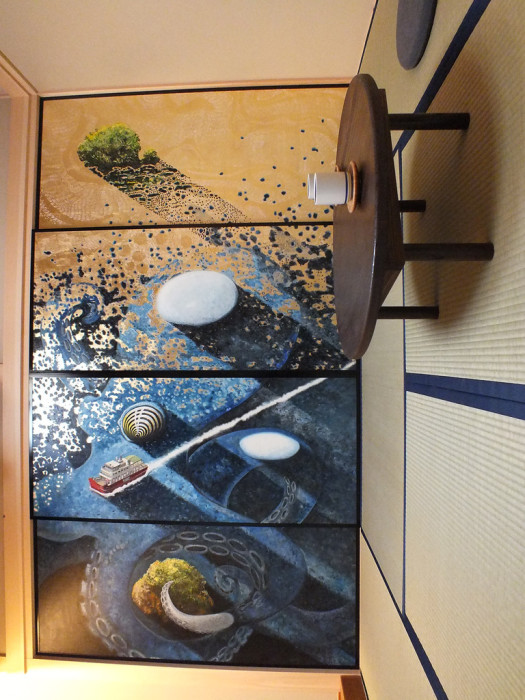 And it has magical properties, it allows Kaito to stand up and Hana to levitate: 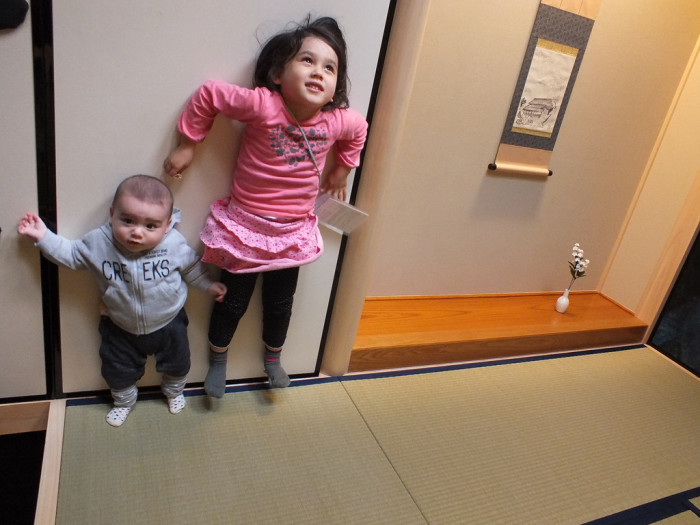 Dreaming of Blue really shows its true beauty under a sunny weather: 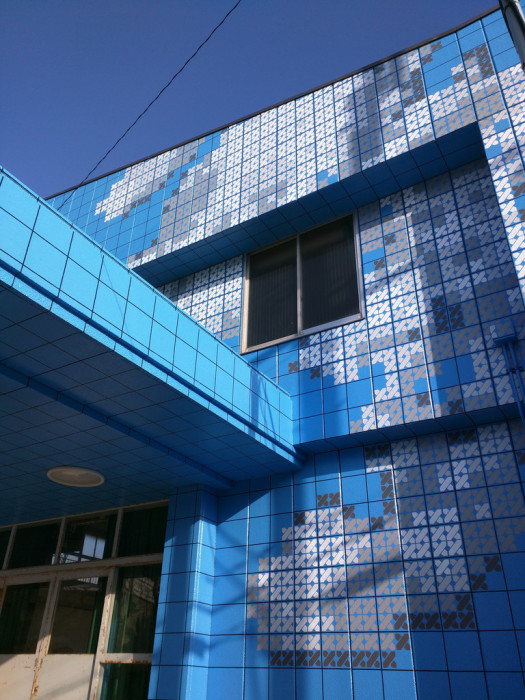 And that’s all for today. Yesterday, I went to Shamijima (I’ll try to blog about it tomorrow), but we really haven’t seen much, it was just too crowded, and we’ll return in two weeks anyway to see the Snuff Puppets show…

The plan for the rest of the week is Shodoshima (on Thursday and Friday) and Inujima (on Saturday) after that, we’ll see.