Setouchi Triennale 2016 on Shamijima, part one

As you already know if you follow me on Facebook or Twitter (and if you don’t, you should 😉 ), I spent the last three days island hopping (two days on Shodoshima, half a day on Inujima, another half on Teshima, posts will come soon). Now, time to rest and update this blog a little bit, starting with last Monday on Shamijima.

In retrospect, it was probably not the best of ideas to go to Shamijima on day two of the Setouchi Triennale 2016.

As you may know, for some reason, Shamijima only hosts the Triennale during the Spring session, and as Monday was a holiday (on top of being the second day of the event), the island was incredibly crowded. I’m talking Naoshima levels of crowded. Three years ago, it is said that Shamijima is the island that received the most visitors. One would expect it to be Naoshima, but I guess the fact that the Triennale only in the Spring on Shamijima coupled with the fact that it’s the only “island” accessible by car tends to attract a lot of people, especially more locals (whereas the other islands mostly attract people from far away? Not sure).

As a consequence, and as almost all of the indoors art is gathered in the same place (the former school), the line to get in was incredibly long (probably around two hours), and as my daughter was in no mood to behave and wait that long, we only saw the outdoors art and decided to see the rest later (we had already planned to return to the island for the Snuff Puppets’ show anyway).

The art of Shamijima that I like was there (either because it never left, or because it was back), but I wasn’t really impressed by the new art. 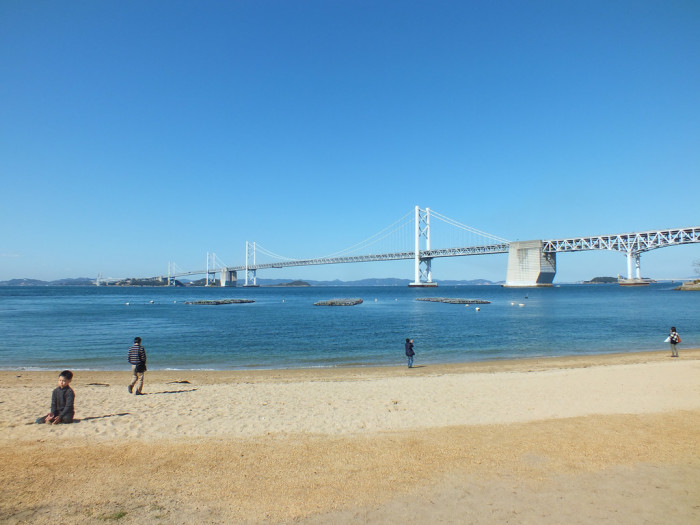 Not part of the Triennale, and not officially an artwork,
but the Great Bridge of Seto never cease to impress. 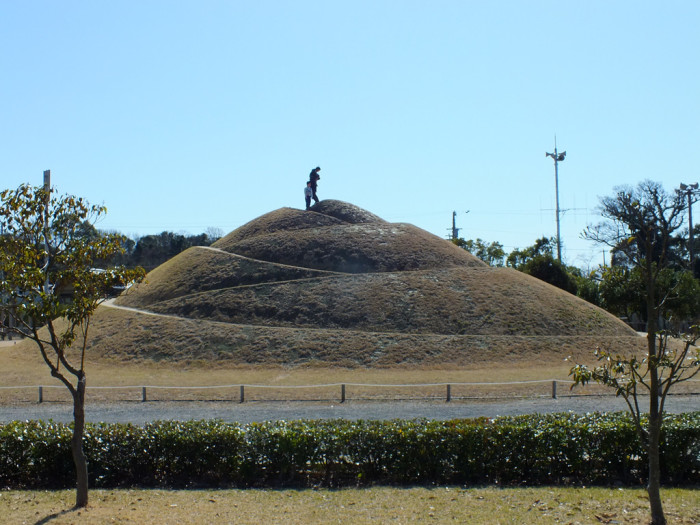 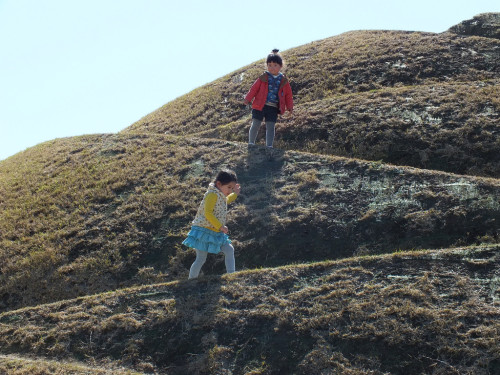 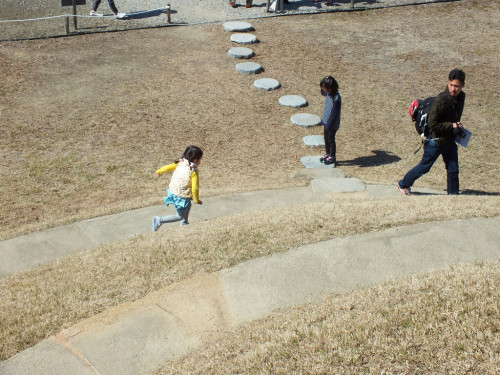 Very popular with kids, especially my daughter, even though she had to learn to share it after having it all for herself when we went last winter. 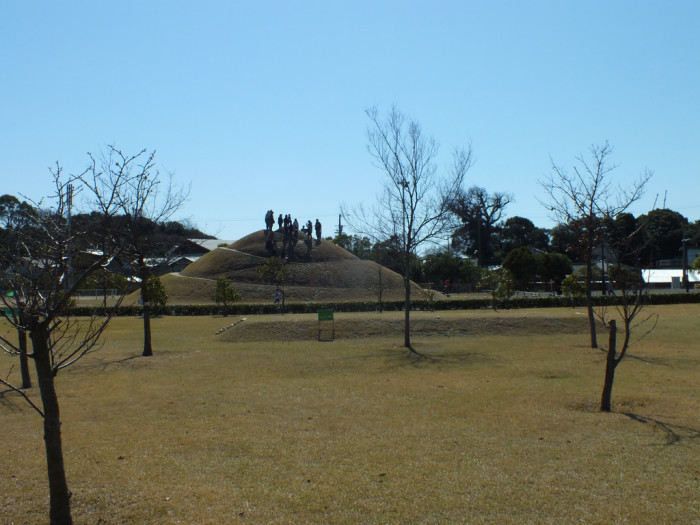 Personally, I’m a big fan. I don’t know why, but there is something about this small hill that makes me feel good, and climbing it is always a fun experience. 🙂

I just wish I saw it green one of these days (I saw it all green from the train on the bridge, but every time I go to Shamijima, the grass is all dry). 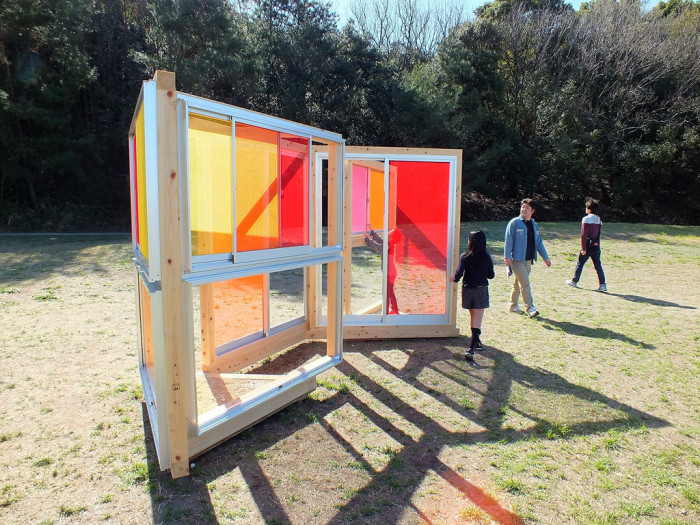 Mmmm… Not too sure what to think of it. I guess that’s the problem; I don’t think anything of it. 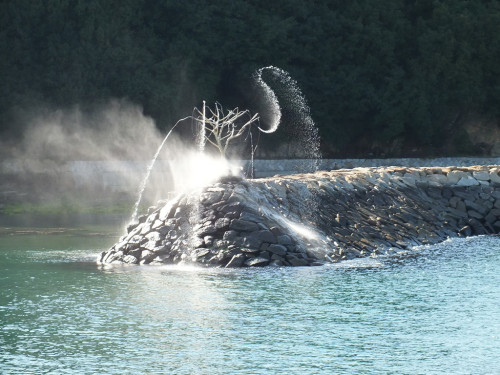 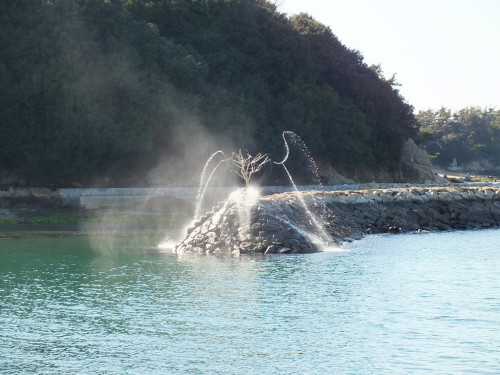 I liked the idea, some sort of tree which has branches that sprinkle water… More or less… However, the end result is a bit of a let down. Maybe it would have been better if I was much bigger… or if we could get much closer… Not sure… Or maybe I missed something?

Now, something very simple and basic, but with an almost magical result and effect. Sora Ami: Knitting the Sky by Yasuaki Igarashi. The Triennale’s guidebook says that it’s new, I’m pretty sure it’s the same as three years ago, but honestly, I don’t care, I just love it as much as three years ago, if not more (I didn’t see it – only on pictures – but at high tide, the net is now above water). And pictures can’t really convey the feeling and the view. 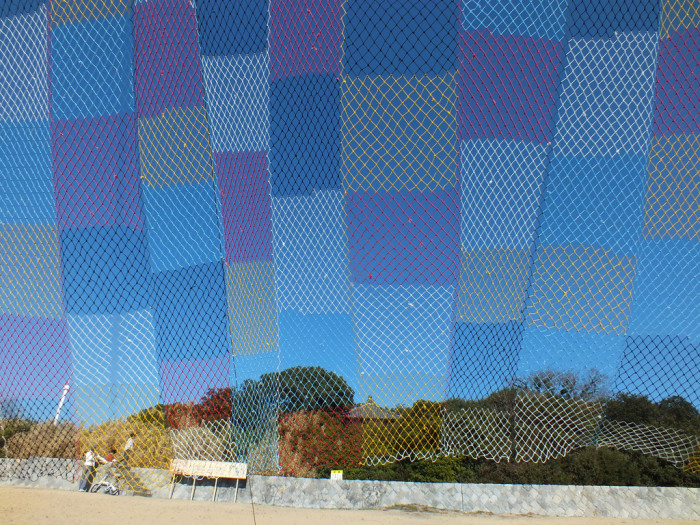 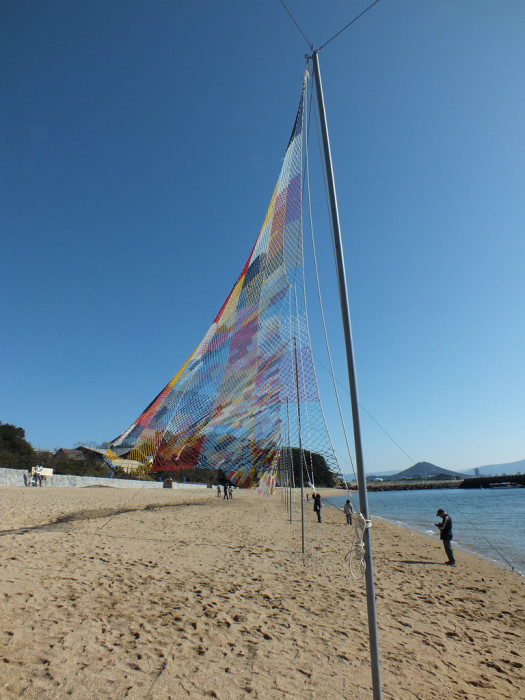 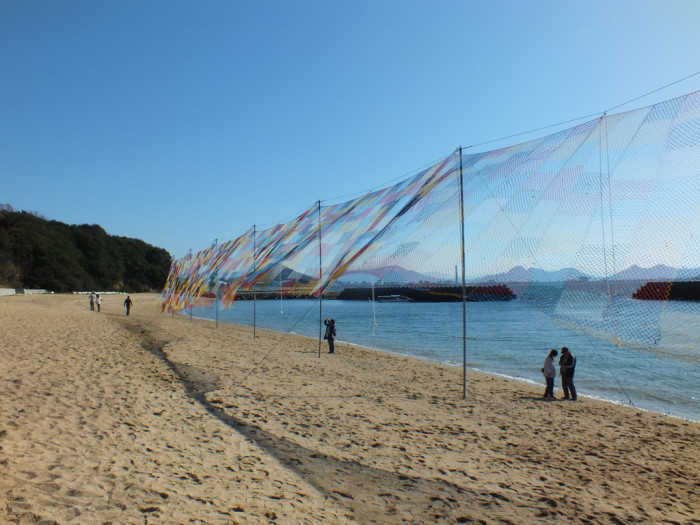 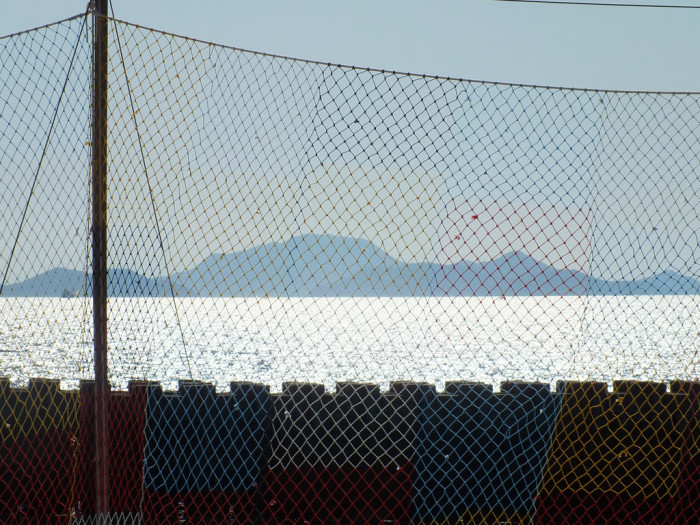 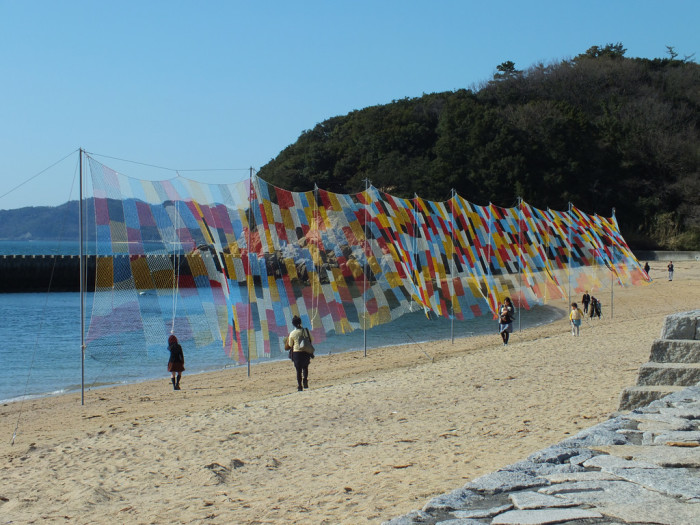 Finally, I went to see Stories of 12 Islands: Animation of Sea Wanderings by Masahiro Hasunuma, an exhibit that will change location from season to season. It was the only indoor artwork that was crowded for some reason.

The exhibit is made of 12 flip-books (I’m told they’re called kinora in Japanese) that tell 12 small more or less abstract stories related to the 12 islands of the Setouchi Triennale.

I only filmed one, I’ll let you guess which island it is:

And that’s all for today. Stay tuned for more updates. Coming next: Shodoshima.

9 thoughts on “Setouchi Triennale 2016 on Shamijima, part one”