Last week, we went to Shodoshima – where I hadn’t been for way too long – in order to see what the Setouchi Triennale 2016 had to offer there. This year, there are about 40 artworks on the island, and it will be a difficult task to manage to see all of them. Some will open this summer, some this fall, and while most of them are gathered in three-four areas, some others are quite isolated. So, we have planned several visits this year. For the first one, we took the ferry to Kusakabe port and went to see the new art on the eastern part of the island (as well as see some old favorites again).

This year, there is art on the port.

I’m really not sure what to think of the first installation (?) that we saw. It is Komame-tei by Satoshi Murakami. At first, it seemed intriguing, even interesting: a very small house (a shed, really) which looks like as if a drawing had come to life in the real world (I realize that there were much better angles to take pictures that really gave that impression… next time…): 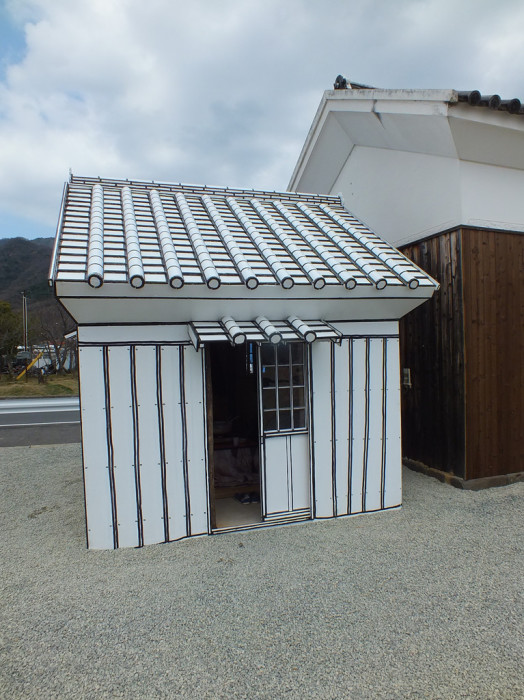 Inside, a young man, Satoshi Murakami, who seems to be staying in that shed. He was cooking nabe and invited us in. 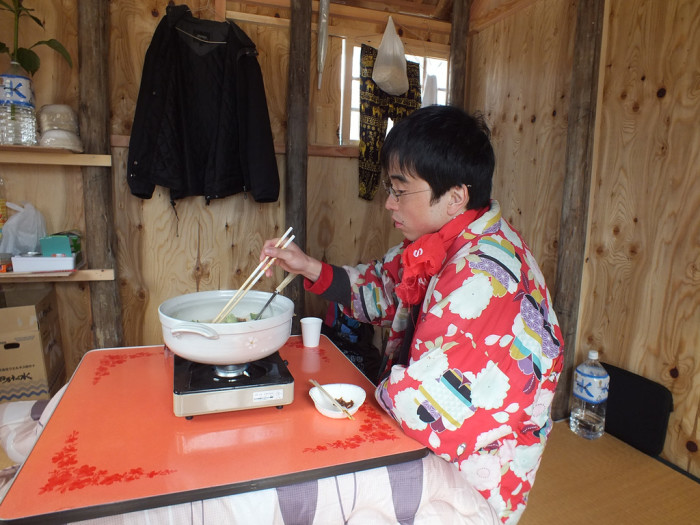 He offered us a cup of tea, showed us the wall behind him and told us that he had been given too many vegetables and not enough meat and fish, if I understood properly. Then, he returned to preparing his nabe, more or less ignoring us. 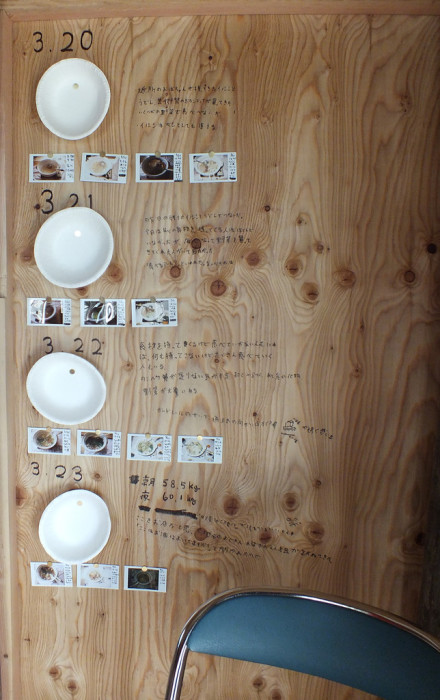 On the wall, the detail of what he had eaten since March 20th (apparently, he’s been in that shed since the start of the Triennale – and I think he’ll stay until the end of the Spring session) as well as a few other comments.

As I was pondering what I was seeing, he ate a leaf of cabbage with some miso.

Outside, on the left, there was an even tinier house/shed, mostly made of Styrofoam and cardboard. The only reason I paid attention to it was because my daughter, followed by the rest of my family, inhabited it for a few seconds: 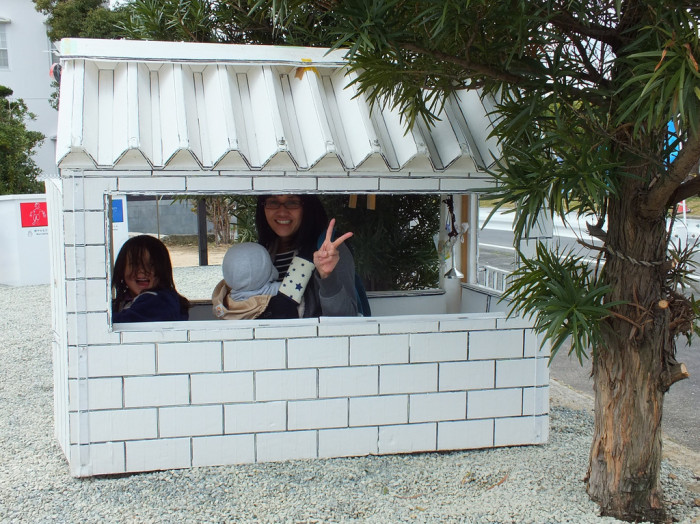 Yep, I had attached so little importance to it, that I didn’t even take a picture for the blog, only this “personal” picture that ends up here simply because it’s the only one I have of that tiny house.

By the way, a side note: you may have already noticed, but my family – my daughter especially – is appearing more than usual on the blog on the Triennale’s posts. Not really a change in the “editorial line”, just the fact that she has a tendency to end up in front of the camera more often than not when we’re visiting the various artworks and I don’t always have the time or the opportunity to wait for her to be out of the field (especially because I don’t want her to go too far, she’s not old enough yet to be careful about incoming cars and such).

But back to Satoshi Murakami. A bit confused by the encounter, I wanted to know a bit more about him and his art. But even after doing so, especially after reading this, I’m still somewhat dubitative about the whole thing. Basically, very affected by the destruction caused by tsunami in 2011 (he must have been in high school at the time), he reduced his possessions to the bare minimum, built his own portable house (that one with my family inside just above) and walks the roads of Japan with making people rethink ownership and hospitality as a purpose.

I don’t know about you, but here is the “rethinking” he triggers in me:

Now, it’s totally possible that something was lost in translation and that I missed important points in what was going on. So, I’ll leave him the benefit of the doubt… Let’s hope I did miss something.

The next artwork, right next door, was called Haragei by Indian artist Sarnath Banerjee. From what I understand, he’s a comic book artist, but while I didn’t hate his art, it didn’t really speak to me either (the fact that I was a bit miffed by the previous encounter may have played a part – I’ll try to revisit it later this year). Here are a few pics:

For our next stop, we took the bus and headed to the neighborhood of Umaki where some strange Revenants (by Sahej Rahal) waited for us. In an abandoned warehouse, some large objects (found there? I don’t know) are covered in mud that had dried out, resulting in some strange somewhat abstract “sculptures”. The Koebi volunteer who was there told us that the artist didn’t want to explain anything, that everyone should make up their own mind. Personally, I liked it. 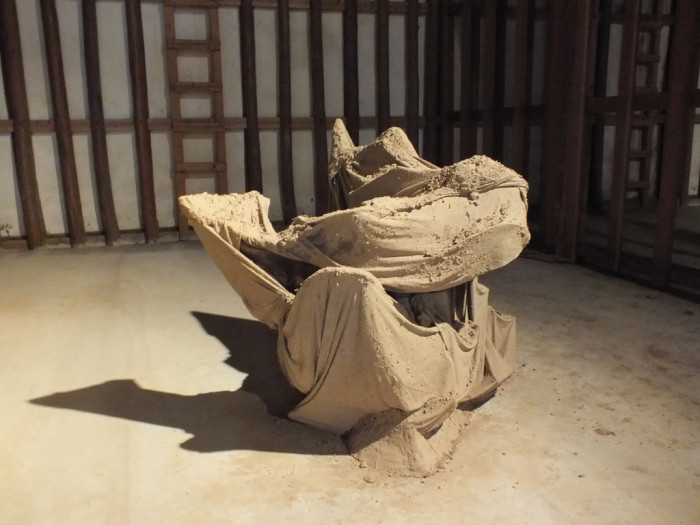 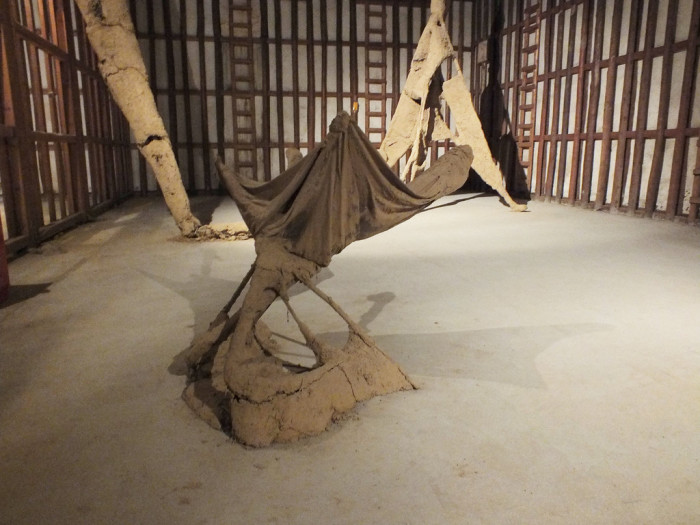 Next, not art, but some fish bones on the way to our next stop: 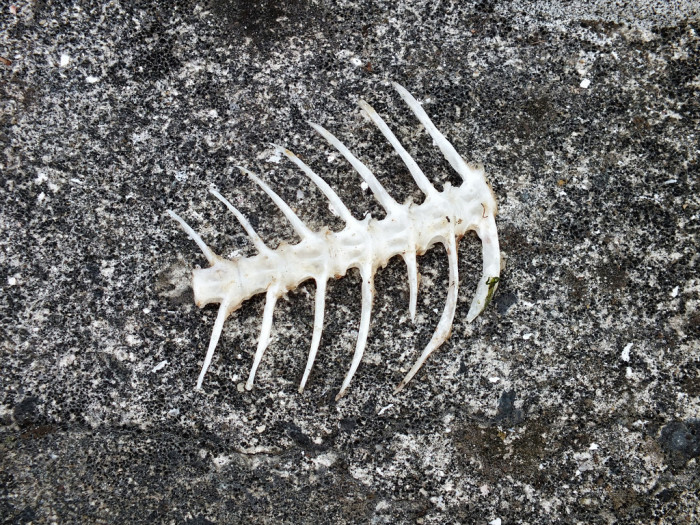 I assume those are some leftovers from an eagle’s meal. They are numerous in the area. 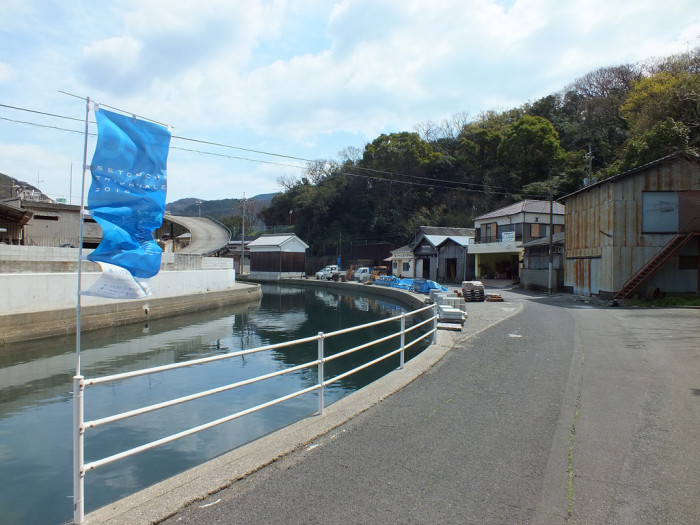 Our next stop is called What are we? by Sosa Joseph. It’s a series of paintings, and unfortunately, I had a very hard time caring for them – to the point I realize that I din’t even take pictures. The fact that they were located where one of my favorite artworks from three years ago was, played against it. Unfortunate, even more so because Sosa Joseph was there and she seemed very friendly, she even seemed that she wanted to start conversation. I didn’t see myself telling her that I didn’t really like her art. 🙁

Right behind, halfway between the building and the shrine that is located uphill was the next artwork, Kaguya’s Pause, which was made by students from Kyoto University of Arts and Design, under the direction of Nagisa Kidosaki. A tea house, but a very interesting looking tea house: 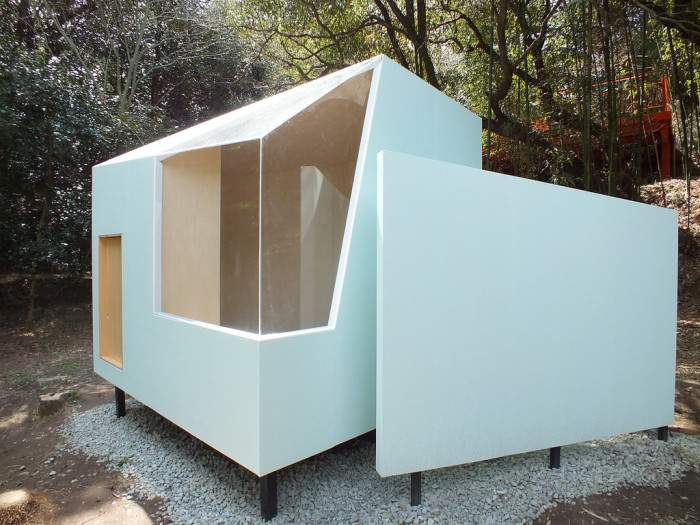 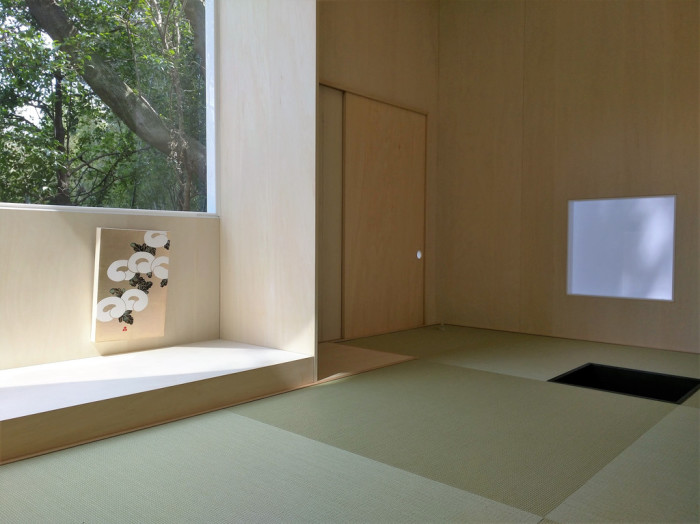 I wouldn’t mind taking part in a tea ceremony inside.

Next, we went to Umaki Camp by dot architects.

How to describe Umaki Camp?

First, it’s not exactly a work of art, at least not in the traditional meaning of the term. However, one must not forget that the Setouchi Triennale is not just about art, but also architecture, food, and other cultural activities that can be hard to classify. Umaki Camp is the three of those at the same time.

It starts with an interesting building, openness is the keyword, and indeed, indoors and outdoors are kinda mixed. The important part is what it is used for.

It’s some sort of community building. It’s open to everyone and anyone, visitors as well as locals. Anyone can use what’s there: a kitchen, a resting place, a garden, an outdoors theater, an outdoor oven, a radio studio, a computer, and I’m forgetting a few things. Pretty much anything can be used by anyone during opening hours, even if there’s no “staff” there. The first time I went there, three years ago, some local women were preparing food for visitors and it was one of the most welcoming and friendly moment of the triennale (there also was a goat, but it was absent this time). There was a small documentary about the village being shown in a room, as well as a photo exhibit from the locals. Last week, nobody was present when we got there, but this is where we had lunch. Some oranges had been left for whoever wanted them (we took a few, they were delicious). We could have cooked there if needed (but we had bought sandwiches and onigiri beforehand). Shortly before we left, some teenagers from the island used the camp as a meeting point and were waiting for us to leave to take over the place (they were being shy, they obviously could have joined us), and they had lunch or snacks together there too.

In other terms, you can do what you want as long as you respect the place and the neighborhood. A place for all that has for goal to help whoever needs it, but also to generate encounters between locals and visitors.

Some sort of small utopia, but a very real place at the same time. It’d be great if such places existed all over the world, but unfortunately, I don’t see them being possible in most countries I know. In Japan, they are. That’s one of the main reasons I love living in this country.

In my opinion, it is one of the most important places of the Setouchi Triennale, even though you most likely never hear about it (too far from Naoshima for bloggers? not cool looking enough for journalists?) 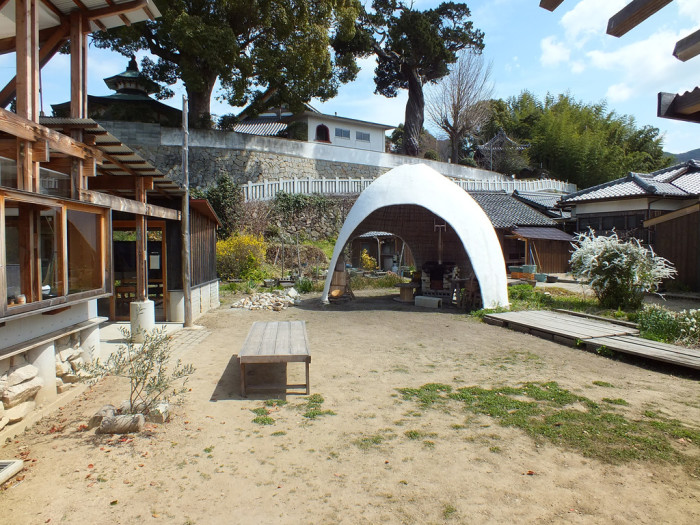 After a brief stop at Hut with the Arc Wall (by Yo Shimada) to change Kaito’s diapers – by the way, I’m surprised that I never talked about this very fun looking public toilet before (I have some old pictures, I need to put them here one day) – we took the bus again for the village of Sakate, a bit further south.

As soon as we got off the bus, we found ourselves face to face with those very odd, almost creepy, pictures on the wall of this shed: 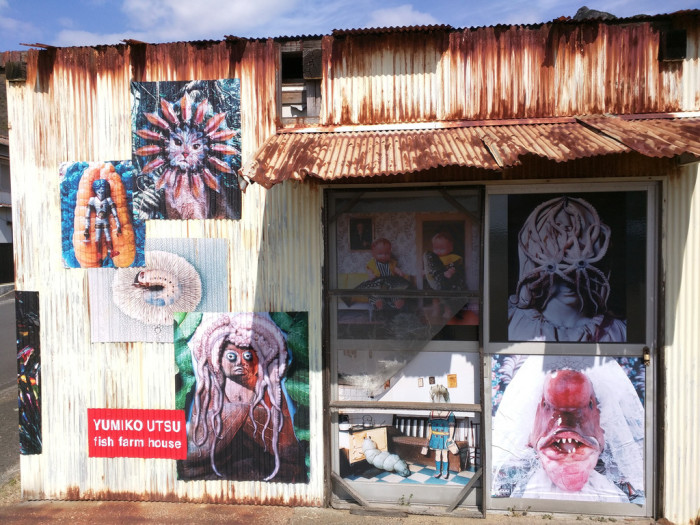 This Fish Farm House by Yumiko Utsu is part of the various art projects that you can find in the streets of Sakate within the frame of Creator in Residence [ei]. Walking around in the village, you’ll stumble upon more works by the artists in residence in the village. Keep your eyes open.

For the past three years, if there is an artist who has become iconic in Sakate, it’s Kenji Yanobe. Starting with this huge mural on a port’s wall: 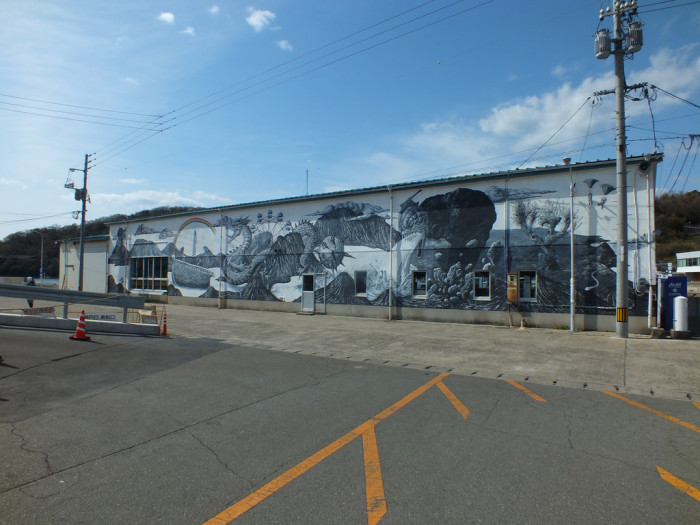 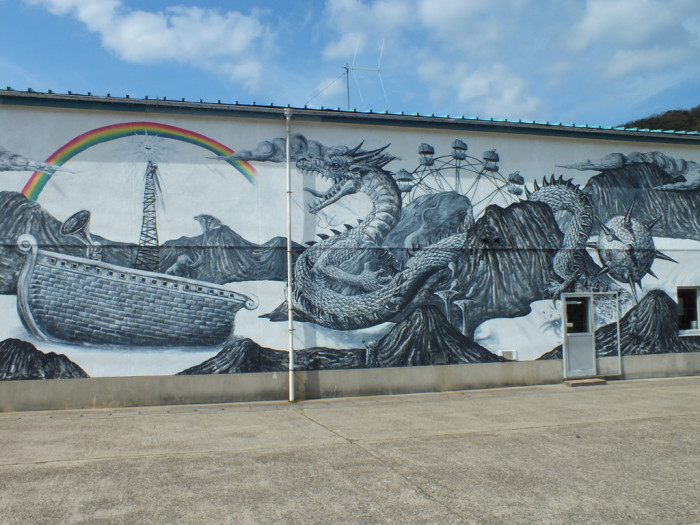 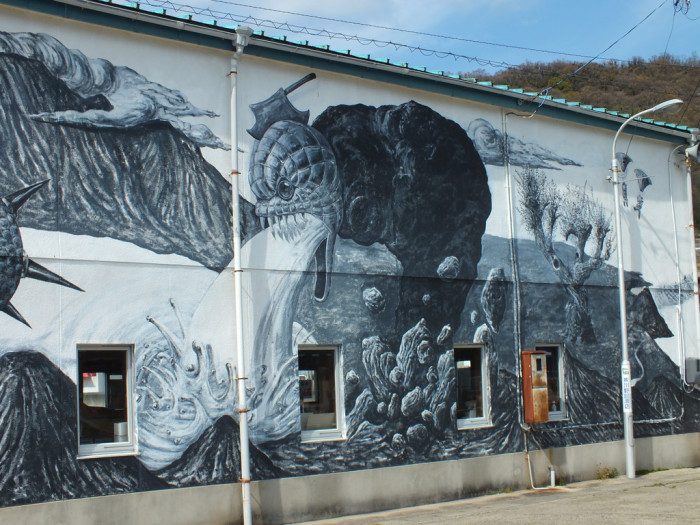 And of course his Star Anger who welcomes people landing in Sakate: 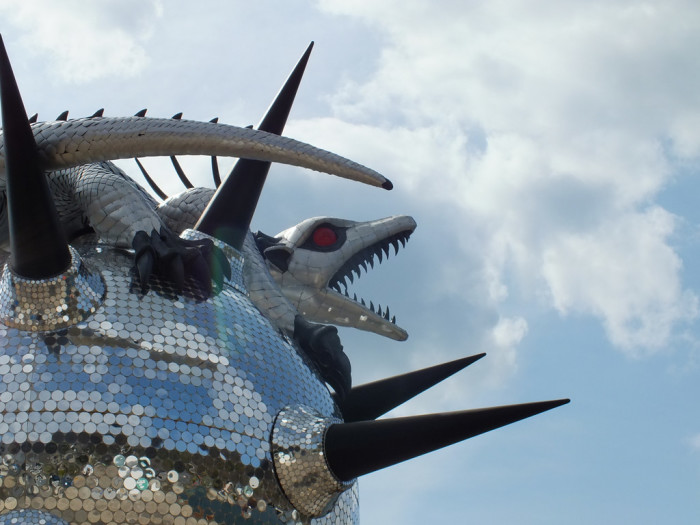 His characters are everywhere in the port: 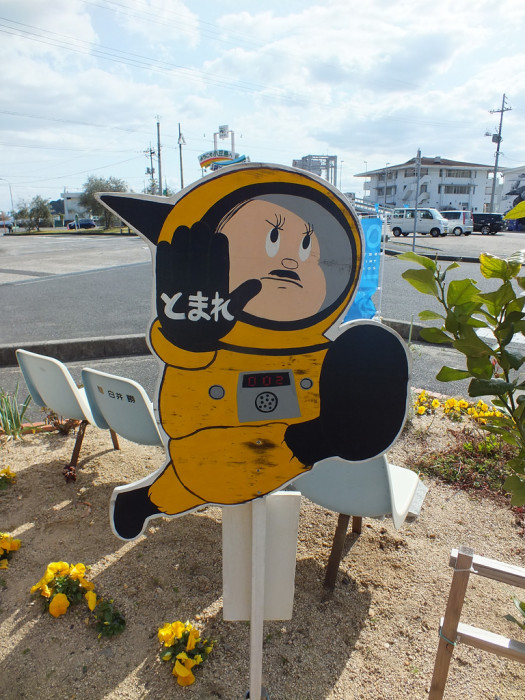 And of course, Kenji Yanobe also co-authored Anger from the Bottom, with Beat Takeshi Kitano, one of my favorites. 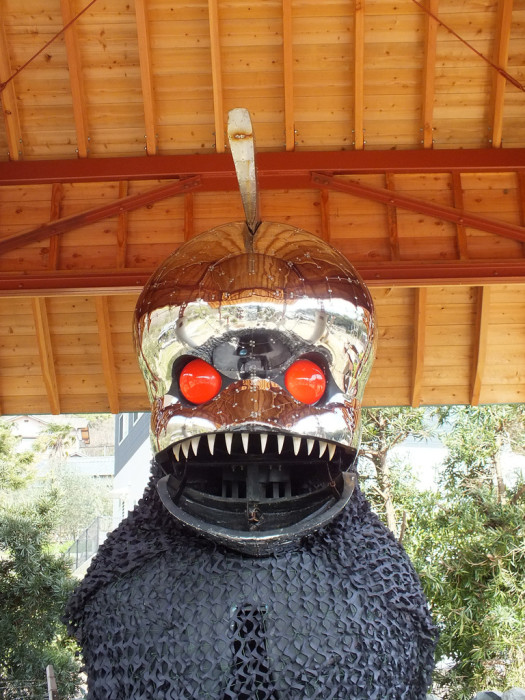 It has changed a little bit since 2013. It doesn’t hide in a well anymore (and doesn’t vomit water?), so you can see it at anytime. Also, it now has a roof above its head. Roof that was built by the same dot architects who built Umaki Camp. And it also has become some sort of shrine, makes sense as the creature is some sort of deity. 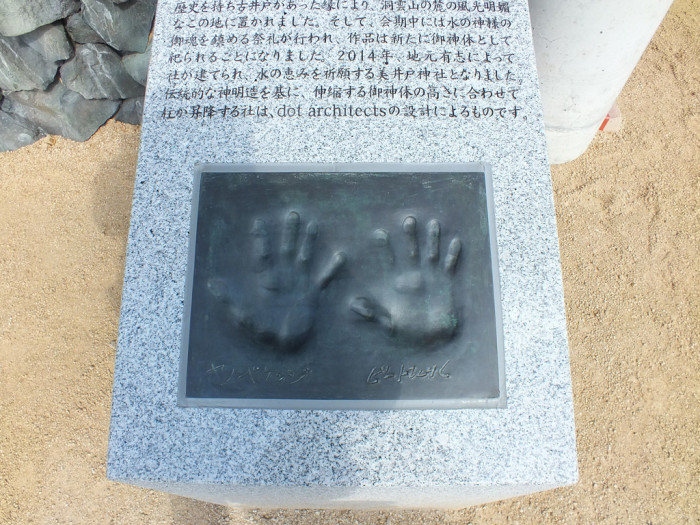 And this is how I found out that Beat Takeshi Kitano has very small hands (on the right side). 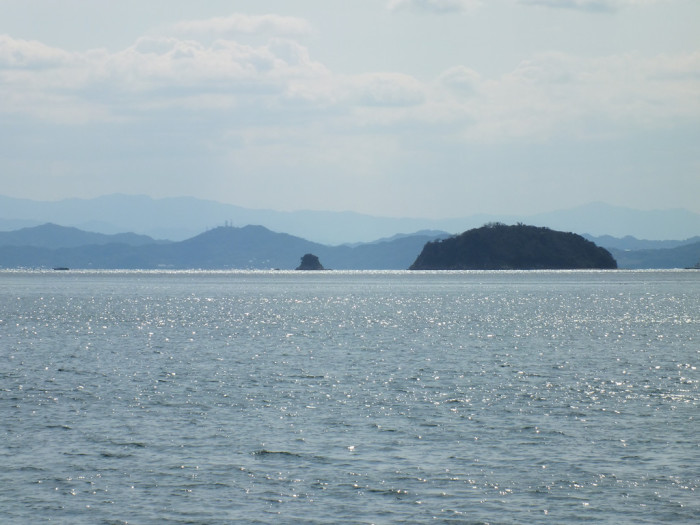 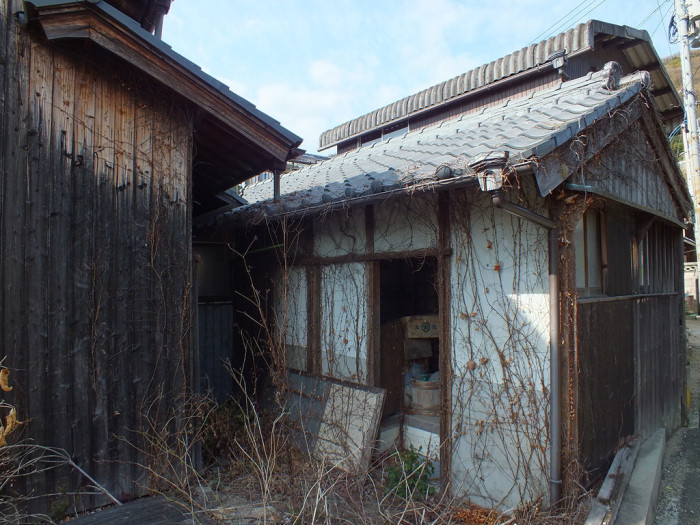 My first Cherry Blossoms this year. 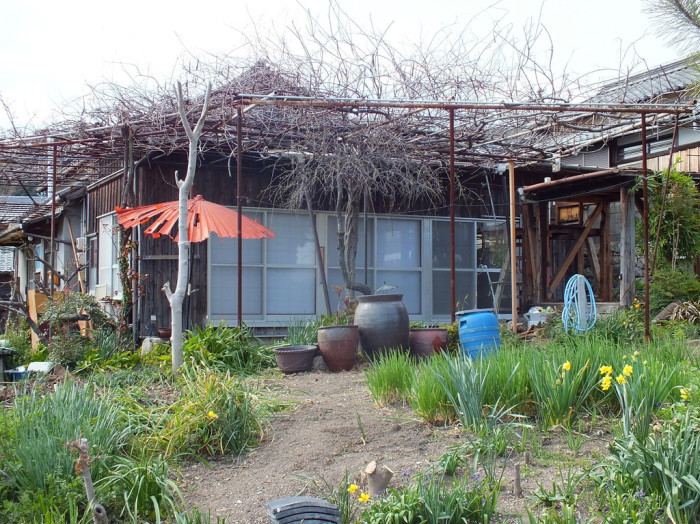 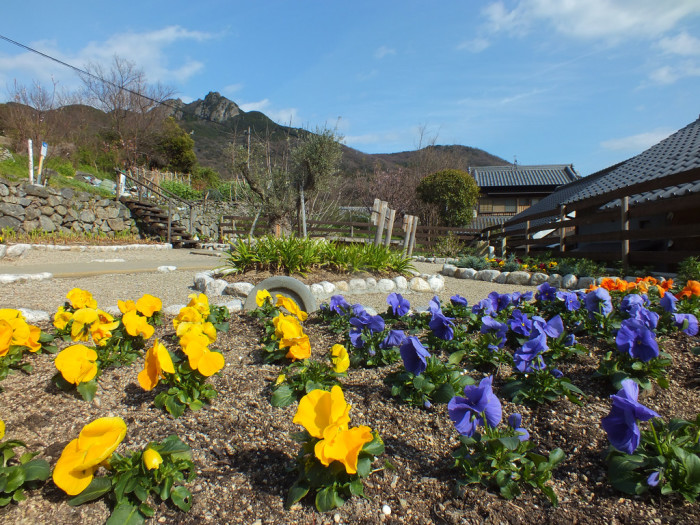 Soon, it was time to return to Kusakabe Port, to eat an ice cream at the Shodoshima Gelato Recipes Project, a “branch” of the Island Lab (that will only open in the Fall this year, why only one month? Or will it become permanent? It should). So, yes, there is an ice cream shop that is part of the Setouchi Triennale! What’s special about it? Some of the ice creams are seasonal and made with products from the island. They were delicious, but a bit expensive.

On the way back to Takamatsu, we got a glimpse of Boy and Monster by Toshimistu Ito, at the very southern tip of Mito Peninsula. Hopefully, we’ll get to see it up close in a few months:

3 thoughts on “Setouchi Triennale 2016 on Shodoshima – Part One”