“Sora-Ami: Knitting the Sky” on Shamijima

A little more than a month ago, I went to Shamijima and met with Yasuaki Igarashi (五十嵐靖晃) who showed me a preview of his work for the Setouchi Triennale 2013, that is Sora-Ami: Knitting the Sky (そらあみ).

So of course, I returned as soon as possible after the triennale to see the finished work: 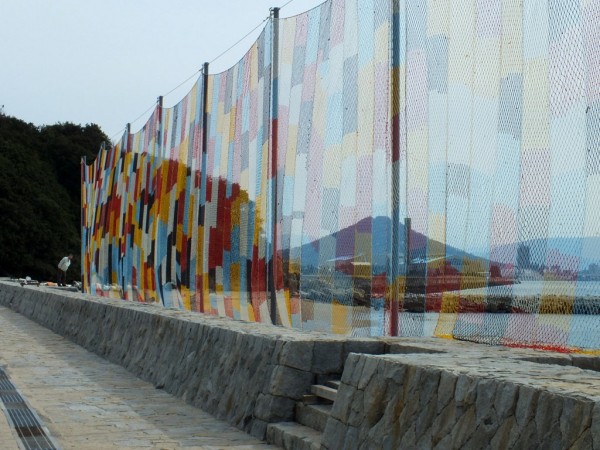 The artwork is a large net (about 60 meters long) made of a patchwork of smaller nets. It is located on the west beach of Shamijima.

The nets were made with the helps of the inhabitants of five islands (Shamijima, Seijima, Yoshima, Iwagurojima and Hitsuishijima). Those islands are not any islands as they are the ones on which or next to which the Great Bridge of Seto (that just celebrated its 25th anniversary this week) was built.

On top of its aesthetics, its interests lies in the fact that it is a real community work that brought together the people of the five islands both symbolically and quite literally.

It’s a good reminder of the main purpose of the Triennale that is revitalizing the area. This revitalization is multifaceted, and as bringing visitors to the area is the most obvious one, it also consists in having local communities becoming more aware of their situation and becoming more active in taking their destiny into their own hands. Revitalizing the area can be a success only if the local populations are in the center and are the main engine of the whole process and Sora-Ami is a wonderful catalyst for that.

Sora-Ami: Knitting the Sky being an outdoors work, its access is free and permanent. However, don’t forger that as I type these lines, the Spring session of the Triennale will end in nine days and with it the art on Shamijima (I still secretly hope that they’ll change their mind and make it last longer, but I have no idea really). So if you have the opportunity to go before April 21st, don’t miss it.