If you follow a little bit what’s going on in Japan (and if you’re reading this blog, I assume you do), you most likely know that this morning at around 5.30am, most people in the western part of Japan (Kansai, Shikoku, Chūgoku, even some parts of Kyūshū) were “affected” by this: 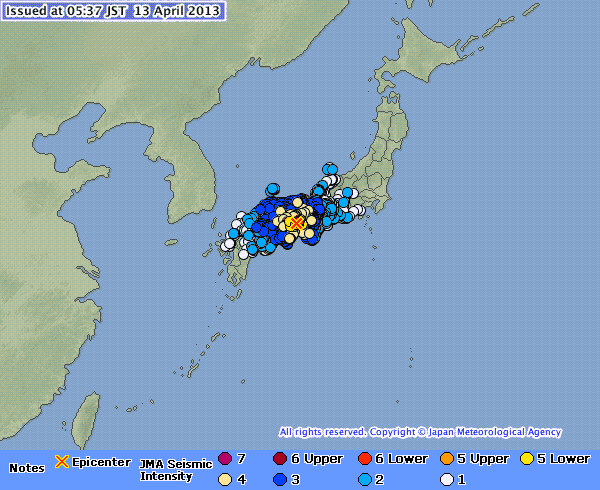 The same, but a little bit closer : 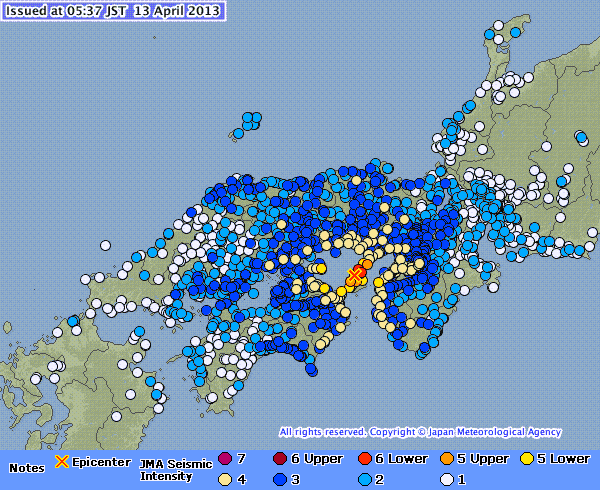 If my count is correct, that was my fifth earthquake since I moved to Japan, but it probably was the larger and definitely the scarier (along with the first one back in November 2011), especially because of its length (no more than ten or twenty seconds, but all the other ones were two or three seconds max)

In the end no damage to report here (even though about twenty people ended up being injured and some damage was done here and there, mostly on Awajishima itself), but this earthquake is a scary reminder that even in the West of Japan we’re not safe from earthquakes (and yes, I’m aware that for you in the East, such an earthquake is almost insignificant), and that a “big one” can also happen on “minor” fault lines too. Actually, the epicenter was just a few kilometers away from the one of the Great Hanshin Earthquake of 1995.

This also reminds me of an article that I read only a couple of days ago in which a Russian scientist announced that a very big earthquake (magnitude 9) would happen before the end of 2014 on the fault line between Shizuoka and Kyūshū. I’m not sure what credit to give to such a prediction (we’ll see in two years) but if it happens, it is certain that Shikoku will be affected (along with a large part of the southern coast of Japan.

2 thoughts on “Earthquake on Awajishima”