After two months of absence, I finally returned to Ogijima four days ago.

I was starting to think that I was cursed or something. Since my last visit back in February, every single Sunday, something prevented me from going; be it having to work (yes, it was that time of the year when I work on a few Sundays), sickness (on several weekends, someone in the family got sick, usually just nasty colds, but also including a pneumonia which almost landed me in the hospital), or weather (it rained many Sundays with otherwise pretty sunny weekdays).

The curse is lifted, I was finally back. Here are the latest news (and a few random pics) from the island.

Let’s start with probably the most important piece of news: 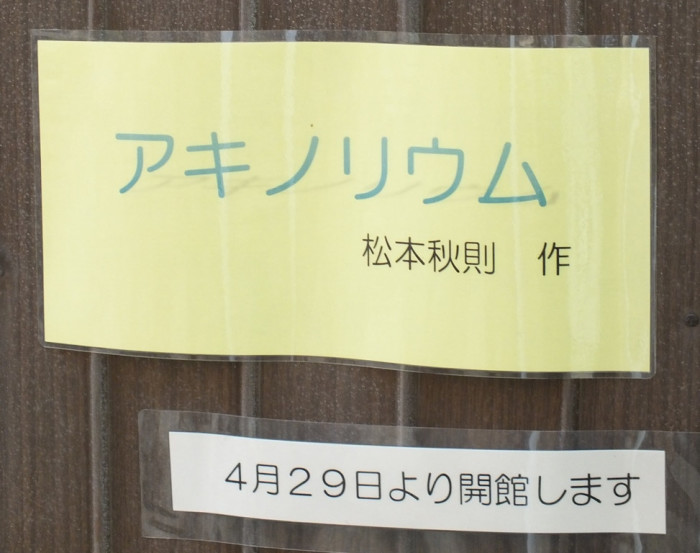 It roughly says “Akinorium by Akinori Matsumoto, opening day on April 29th.” We were April 29th! Yes, this was the first day of the new artwork on Ogijima that had been inaugurated a month earlier. As you can see, things are really brand new, there isn’t even a permanent sign yet, just some laminated paper.

Just know that this work of art is important, not only because it’s new, but also because it’s the first work of art on Ogijima that is “independently” managed (that is, not by the Setouchi Triennale’s Committee), a little bit like Missing Post Office on Awashima and… well… all the Benesse Art Site artworks on Naoshima, Teshima and Inujima.

Of course, I visited it, and it will get its own dedicated post very soon. In the meantime, just know that it was wonderful. Here is a small teaser: 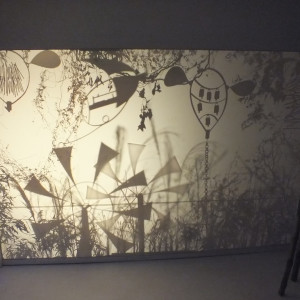 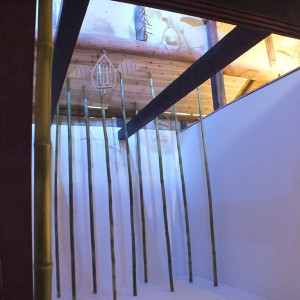 Walking by Takeshi Kawashima & Dream Friends Gallery, we saw that Yuki Tani was there, still working on the current exhibit, so we decided to pay her a visit. I realize that I have never talked about it here, so here are a few words. Last Fall, Ms. Tani, a local artist and art teacher who mostly works with young kids, started an installation in the gallery based on a collection and accumulation (in pure Dream Friends Gallery fashion) of creatures mades by kids who stopped by the Gallery (as well as from workshops she held in Takamatsu) into an improbable and delightful zoo.

This is how Hana got her first art exhibited at age two and half. And of course, she ended up creating a new one this Wednesday (now she has five of them!!!): 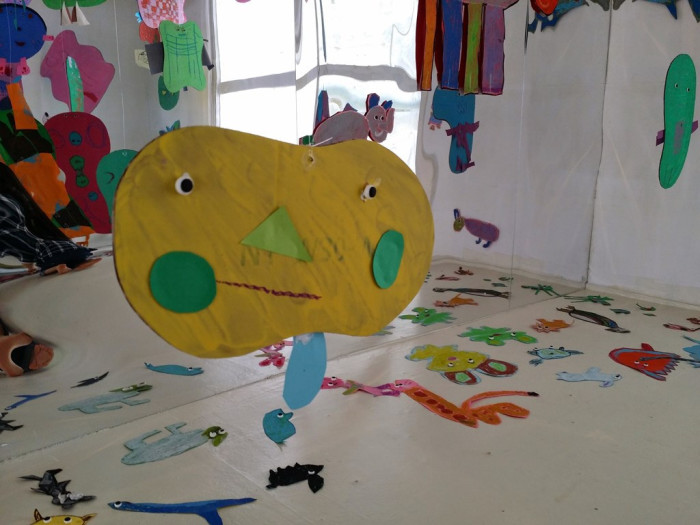 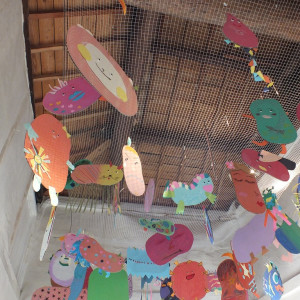 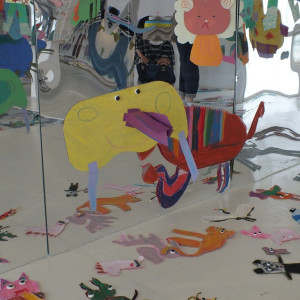 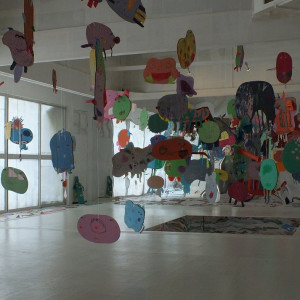 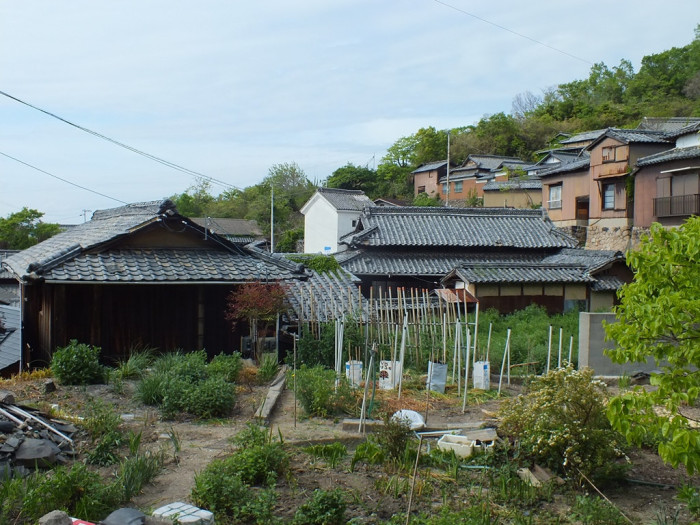 Look at these two (connected) houses. The one on the left has recently been renovated and is now a meeting and gathering room for the residents (for various events and meetings) – there’s another room that has yet to find its purpose. The house on the right will be renovated soon and will become… oh wait, I’m not allowed to tell you yet… 😉 Just know that if all works out – things haven’t been finalized yet, hence the secretive aspect – it’s gonna be exciting news, and I assume, one of the main attractions of the Setouchi Triennale 2016 (and beyond). 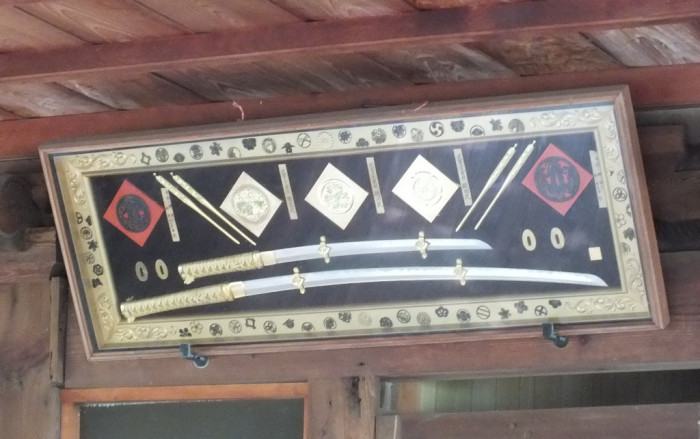 Last winter I noticed this amazing katana for the first time. I can’t believe I had never seen it before – I assume it wasn’t there. And no, I won’t tell you where to find it, you’ll have to find it by yourselves. It’s not that hard. 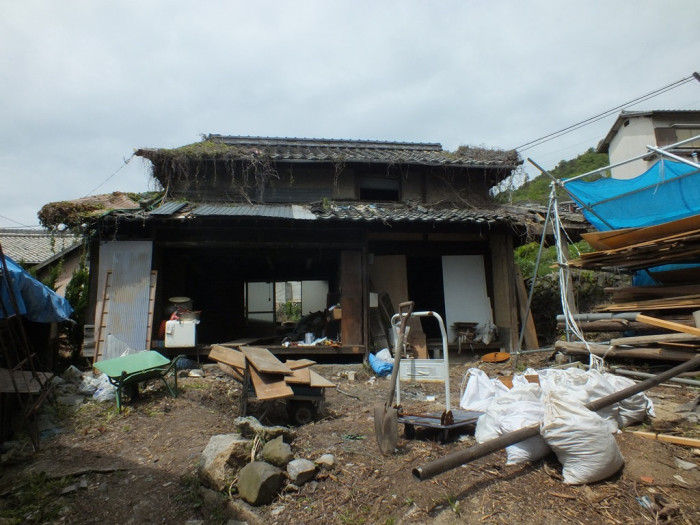 The future Ogijima Library is not ready to open just yet. But they’re working hard on it, almost every day at the moment.

Sadly, Maison de Urushi remains closed. It’s not permanently closed (and will be open for the Triennale in 2016), but in between Triennales, it’s now only open for special events.

(Note that Hana took this picture. Her pictures are less and less random, and she’s really starting to develop some photography-taking skills!)

Of course, no trip to Ogijima in the Spring is complete without a stop at Onba Factory, that has also seen some changes for this 2015 Art Setouchi season. 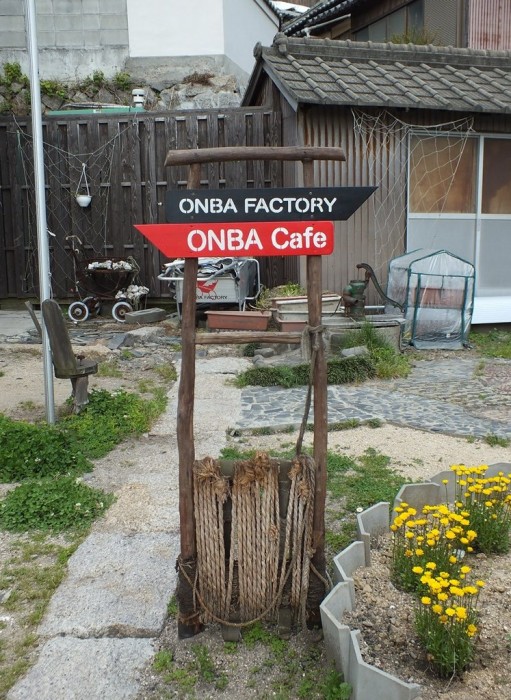 Now, the Onba Factory and the Onba Café are kind of split. Most of the Onba have been moved out of the café except for a few, and the old storage space in the “factory” has been turned into an exhibit room where one can see some more or less recent Onba as well as pictures and technical sheets of every single Onba ever made.

As a consequence, the café is kinda becoming a real café, with much more sitting space: 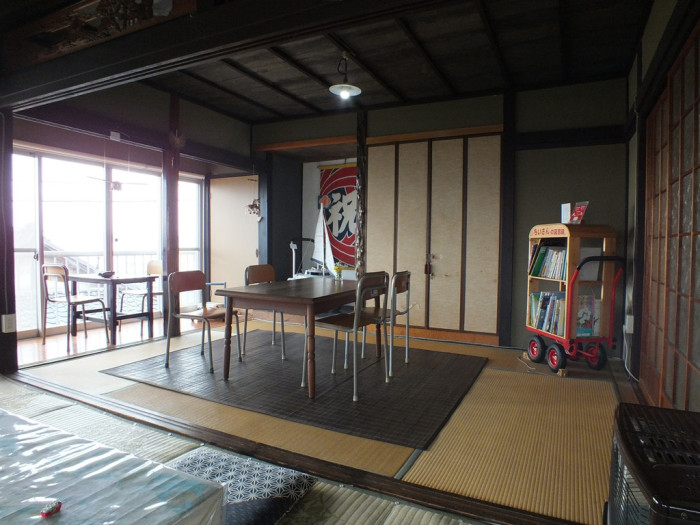 Worry not though. When I saw the first pictures, I thought that the low tables were gone and that there were now only normal tables with chairs, but no (as you can see in the bottom left corner of the picture), they are still here! 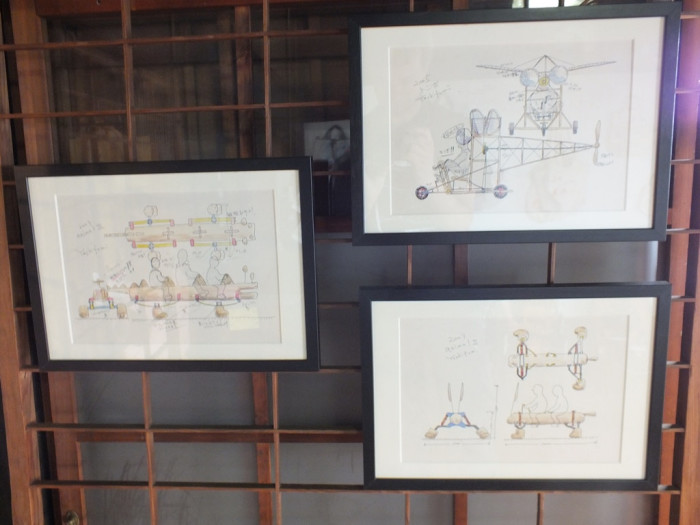 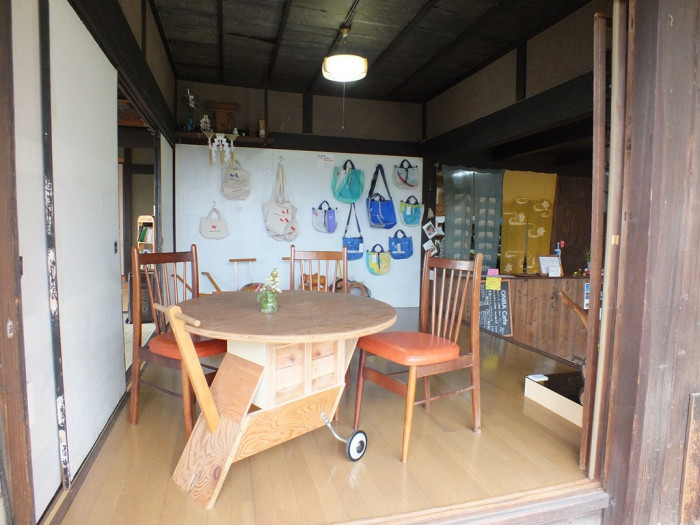 In the yard, you can enjoy the newest Onba: 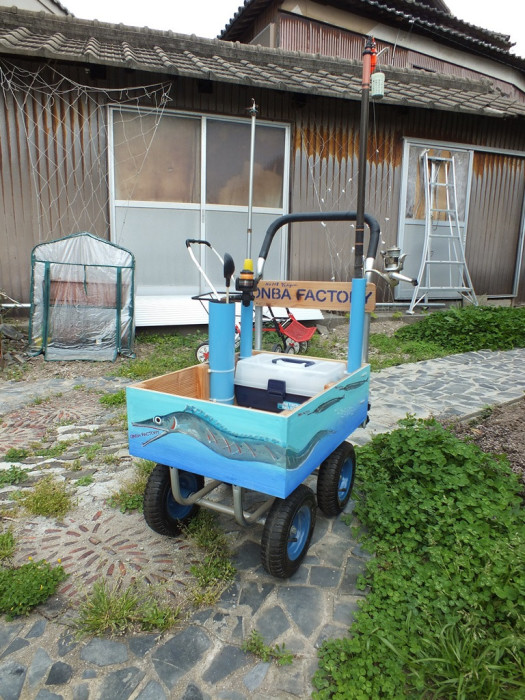 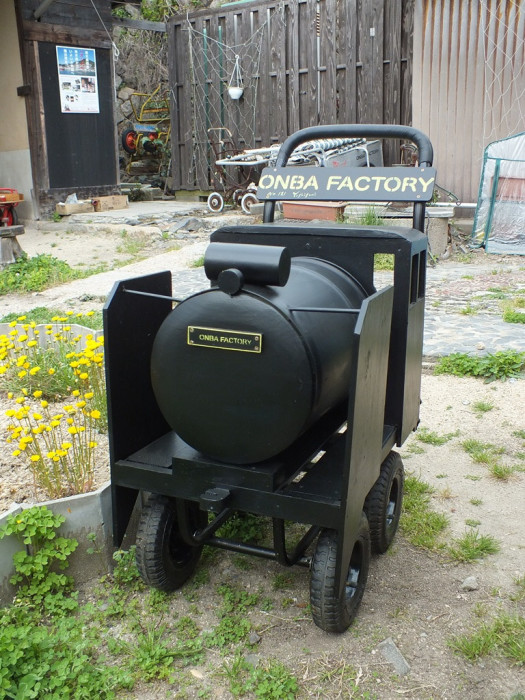 The working space hasn’t changed much if at all. 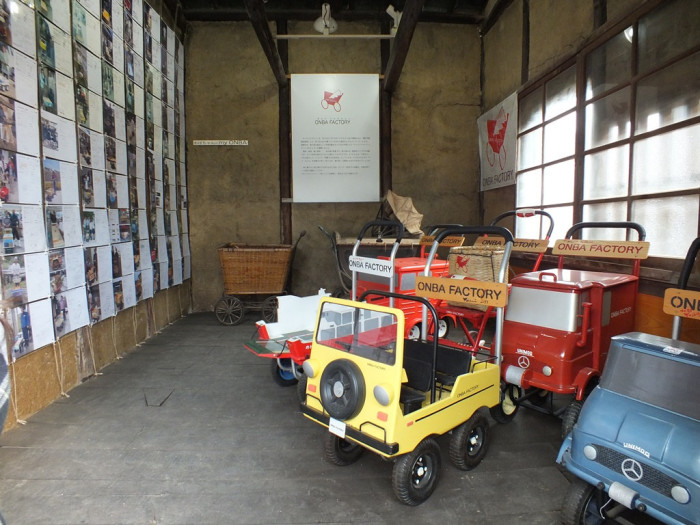 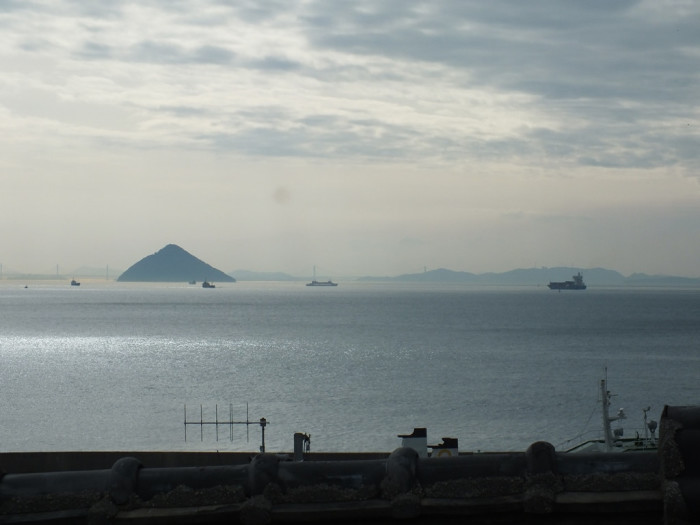 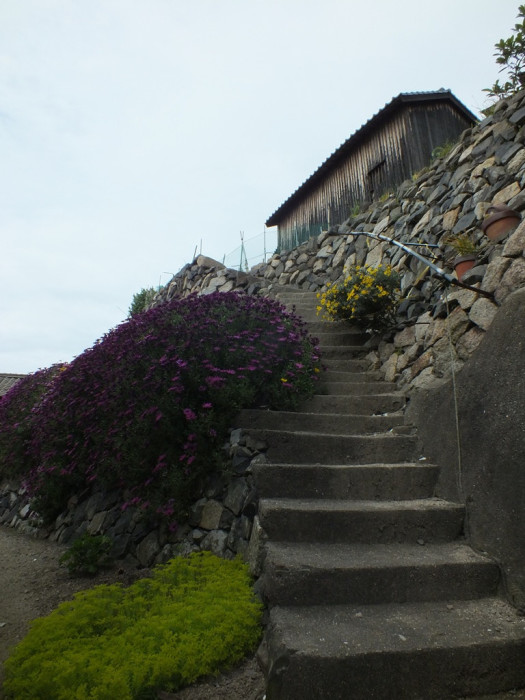 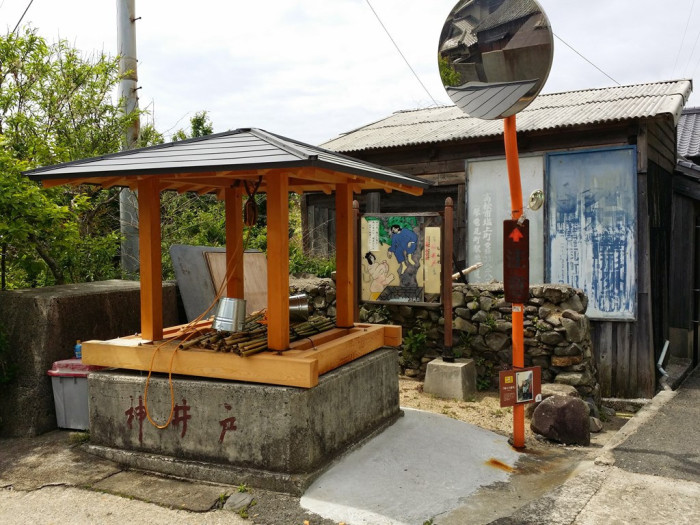 Finally, Toyotama-hime’s well, Ogijima’s main well, has been renovated is now functional for the first time in decades. (Mr. Kiba told us about the upcoming renovation back in February, but I didn’t think it was going to be that fast). Water is not drinkable just yet, but that’s the next goal.