There are only 10 days left in the Spring session of the Setouchi Triennale 2019, so it’s not too late to tell you about Madeleine Flynn‘s & Tim Humphrey‘s art on Shamijima. Or rather, have them talk about it.

They were very kind to answer my question right before the Triennale starts, but unfortunately, I’ve been so busy (and a little sick) lately and it took much longer than planned to publish it. Sorry about that.

Finally, here it is! 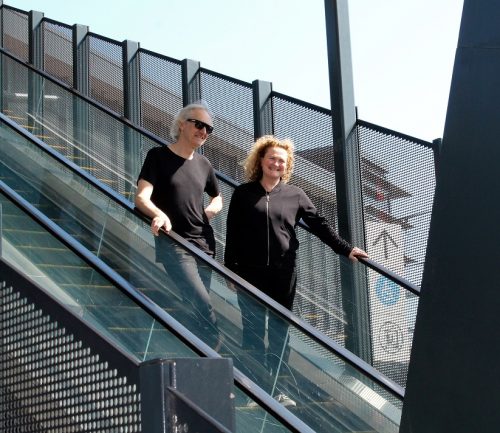 Hello Madeleine and Tim. Could you tell us a little bit about yourselves?

How did you hear about the Setouchi Triennale and what made you want to take part in it?

We had visited the Setouchi region with our family and been inspired by what we saw. Of course, we had heard of the Triennale from other Australian artists who had spoken very highly of their experience.
Our practice intertwines local, national and international relationships, and over the past few years, we’ve been working with Japanese collaborators on a number of projects. Through these connections, we were introduced to the Triennale team and our relationship started there.
The connection of site, audience, contemporary thought and community is clear in the curation of the Triennale, and we see these intersections as key to making art. 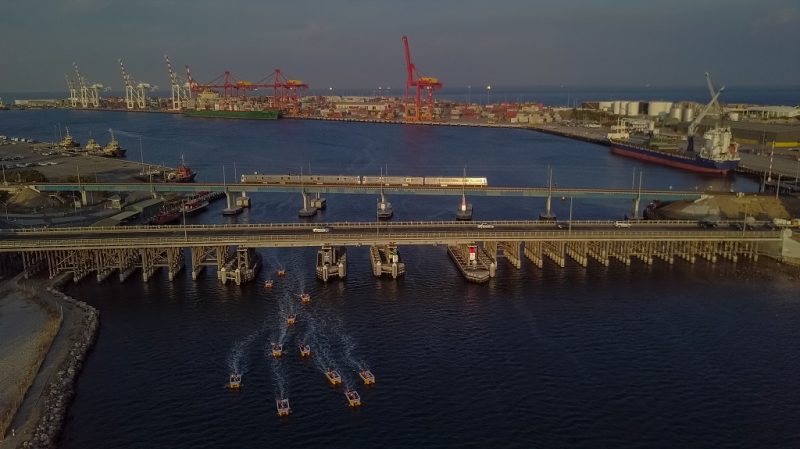 We came for an initial visit and looked at a number of sites, with both ourselves and the Triennial team settling on the Shamijima site. Shamijima sits at the intersection of human endeavour and incredible landscape, with a connection to the water. The beach at Shamijima hosts a monument to the language of 7th century court poet Kakinomoto no Hitomaro and looks out to the Seto Ohashi Bridge, past a collection of blowfish floats. Behind the beach are two burial sites. The island that is no longer an island, is a site that is continually reforming. The site for Pivot is a haven for new work, sitting within a space of the former Elementary and Junior High school.
The Sakaide City and Setouchi teams facilitated conversations with us with the communities of Shamijima, Hitsuishi, Iwaguro, Yoshimo, and Seijima. Those conversations were hilarious, poetic and thoughtful: about the past, present and future of this place. 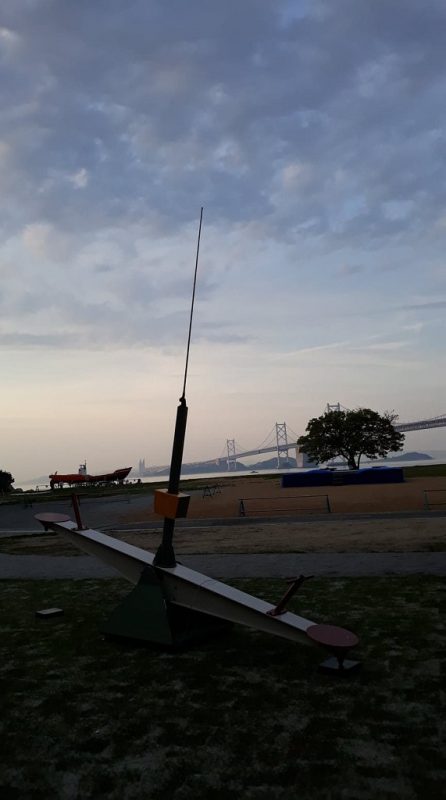 Our work Pivot creates a field of semi-intelligent seesaws, offering a playground for anyone adult enough to want to engage with ideas and passions that may be different to their own. Pivot is programmed to consider all the words it hears, and reflects many views, in an absurd meditation on the promise and the perils of AI. Pivot for Shamijima speaks in the three languages of Japanese, Taiwanese Chinese, and English, which reflects the percentage of visitors to this site. The conversation and knowledge that Pivot shares is informed by our conversations with local people, and of the site.
We speculate that the present and accumulative operation of Pivot conversations as hinting at a new kind of literature; an emerging and broad field that claims territory over the exploding archives of Twitter, e-mail, emoji, Snapchat, and the qualities of engagement with language (and translation) that encompass even the digital artefact of traditional literature. Pivot’s intention may be to persuade riders to the viewpoint that it is worthwhile just to engage in a dialogue, however absurd, and perhaps even open a chink in the armour of an increasing totalitarian internet.
With Pivot the stage is the field of seesaws, the “writing” is the assemblage of scripts declared on the seesaws, and “the positions of bodies in shared space” are the literal bodies in position, sharing a physical and narrative space, riding the seesaws. You can say what you like, the seesaw doesn’t care, and the seesaw makes no sense. The public can either ride the seesaws or watch and listen as audience.
There is a live quality of conversational noise; a new discourse for public space; absurd dialogues without agenda, interspersed with a declarative soundscape; signalling a “new” space of gathering, for conversations, and signalling, or defining a new space for public activity. The truth is only in the experience and the encounter, with good, bad, and ugly, words.
For the rider, Pivot is a place of meditation. Hypnotic or soporific motion. United through a metallic beam about the centre, with the other person. The seesaw speaks gently, then a little
gratingly, perhaps becoming annoying, or alternatively soothing. A little up and down with the legs absorbing the shock; after a while it becomes automatic. Needles to the sky. The opiate apparatus of a rocking motion. Feet off the ground, aligning a particular physical rhythm with the rhythm of dialogue. Spending time in simple motion and occasional interjection.

Thank you so much, Madeleine and Tim, for your answers. Pivot was indeed a quite interesting artwork to experience.

You can read about my first visit to Shamijima during the Triennale there:

I hope I’ll be able to go a second time. We’ll see.

If you want more information about Madeleine Flynn & Tim Humphrey and their art, I warmly advise you to check out their website.

Photo credits: all pictures were kindly provided by Madeleine Flynn and Tim Humphrey.