When most people hear the words Japan, Art and Island, the first thing that comes to their mind is Naoshima. And it is true that Naoshima was the first “art island.” A little more than 20 years ago, museums and art installations started popping up here and there all over the island. And in 20 years it has acquired quite a reputation. However, if you’re a long time reader, you know that I have a few issues with Naoshima. First of all, fact is that it has become a little bit too touristy. Also, even if some of the museums that are on the island are simply amazing, they remain museums (i.e. they could be anywhere else in the world, they’d be roughly the same). Sure, there is the Art House Project that is linked to the location, but while I like the concept, I’m not always a big fan of the result. In other terms, despite what you can read here and there about Naoshima, it keeps on leaving me somewhat unsatisfied. Even more so when I compare it with the neighboring islands, especially Teshima.

To my eyes, Teshima definitely is the most exciting island in the Setouchi area as far as contemporary art is concerned. I already told you about my love for its people, its natural beauty, its food. The artworks that are located on the island are on par with the rest. Of course, there is the Teshima Art Museum. The building alone is worth making the trip to Teshima. Les Archives du Coeur, Was du liebst, bringt dich auch zum weinen, Shima Kitchen, and a few more also come to mind, but last summer a new work of art was added to the island, and what an artwork!

Of course, I want to talk about Big Bambú by Doug & Mike Starn.

This work is part of a series that started in their studio in New York State and then emerged into the world, at the Metropolitan Museum, the 54th Venice Biennale and the Rome Museum of Contemporary Art. It is on Teshima, near the village of  Kō that the latest incarnation of Big Bambú has taken shape.

Last July, I had the chance to meet the Starn brothers as well as their crew. They all turned out to be very friendly and welcoming and I really regret not having been able to spend more time with them (but they were quite busy as you can imagine). Back then, they introduced me to Big Bambú and gave me a preview as it was being built.

It’s only last October that I could finally visit it and experienced it as a completed artwork:

The visit is divided in two parts. One can access the first part of the project quite easily whenever it’s open. It’s a large and quite chaotic structure made of many bamboo poles attached to each other and to the live bamboo that is still growing. The rest of the artwork uses that structure as a support and base. When they introduced it to me, Doug and Mike Starn called it “the mess” and it’s a quite good description. It’s actually quite fascinating (and scary?) to know that the part of the artwork that you’ll visit afterwards, high in the trees, lies on that “mess” and depends on it for stability and safety. Actually this chaotic mess is extremely resistant, partly because it’s so dense and intertwined. 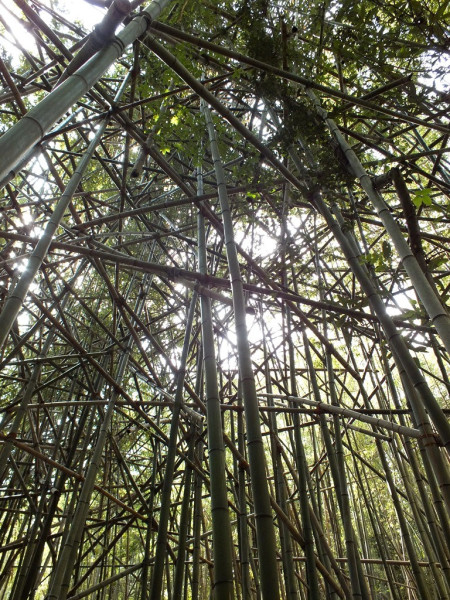 Teshima’s Big Bambú, as opposed to the previous incarnations of the project, is unique for two reasons. First because it does represent something beyond an abstract shape made of bamboos (a local fishing boat floating above the canopy), but also because it is made of both cut bamboo poles and live bamboo stalks growing all around.

Next, you’ll of course want to visit the main part of the installation, the fishing boat that’s floating about 20 meters (65 ft) above ground in the bamboo canopy. For obvious safety reasons, you can’t go up there simply as you wish. The visit must be done in a small guided group. Be mindful of that if you come to the island on a crowded day, you’ll have to make a reservation. No need to do it days ahead, I don’t think you actually can. Instead, once you’ve arrived near Kō, go there first, and if there is a need for reservation, sign up for a specific time and then go visit the rest of the village and its artworks. As I’m typing these lines, there are currently three permanent artworks there: Big Bambú as well as  Beyond the Border, the Ocean and the “veteran” Distant Memory). Also two other things in mind; Kō is Teshima’s smallest village and there aren’t any shops or cafés (I could be wrong, there was a cute refurbished building on the beach the last time I went and it could be a brand new café), and finally if you came by bus, don’t forget that they are pretty rare in the village, so don’t miss it on your way back. However, if you do, walking from Kō to Ieura is not too difficult (less than in the opposite direction) and walking to the Ieura’s port takes about 30 minutes.

On top of that, again for safety reasons, there are a series of rules you are to follow if you want to be able to experience  Big Bambú. May I advise you to give them a look on the official site?

When it’ll finally be time for you to climb up Big Bambú you’ll be invited to follow the guide who will lead you to a walkway entirely made of bamboo and that goes up among the trees and the stalks: 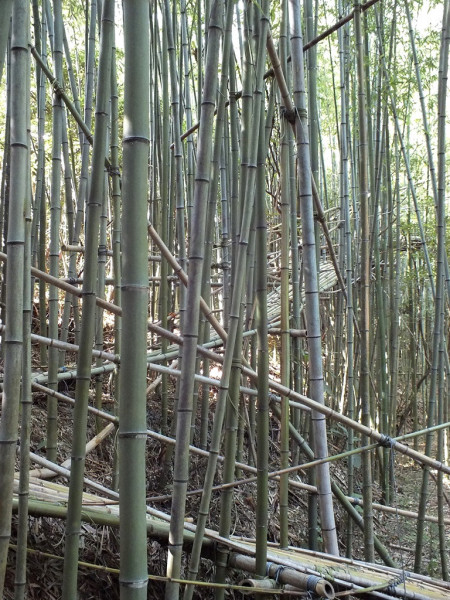 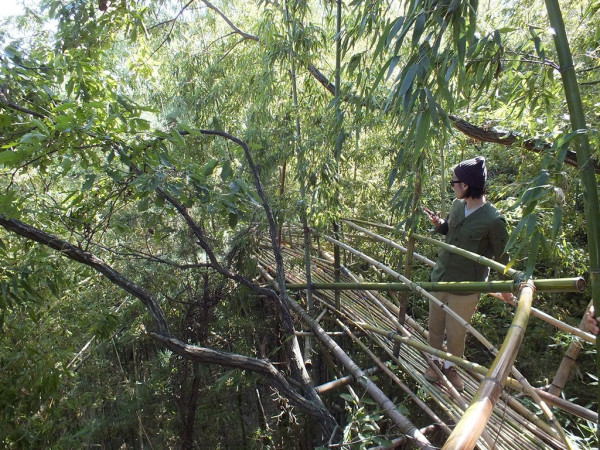 The higher you get, the narrower the walkway gets. 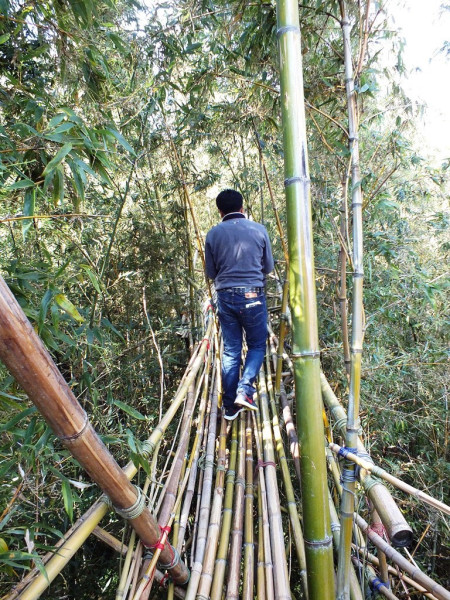 At that point, you’re about 18 meters above ground, and the feeling is pretty strange (probably even stranger than when you’re on the boat itself) as the walkway is pretty shaky; the bamboo stalks that are attached to it being pretty thin at such a height. You also find yourself above the few trees that grew in this bamboo forest. You are literally between earth and sky.

And finally, you get on the boat itself: 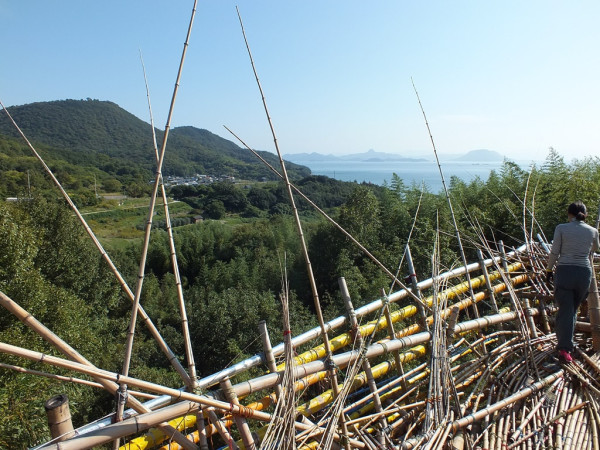 (as usual with galleries, click on the pictures to see them full-size, after clicking you can go from picture to picture with the left and right arrow keys) 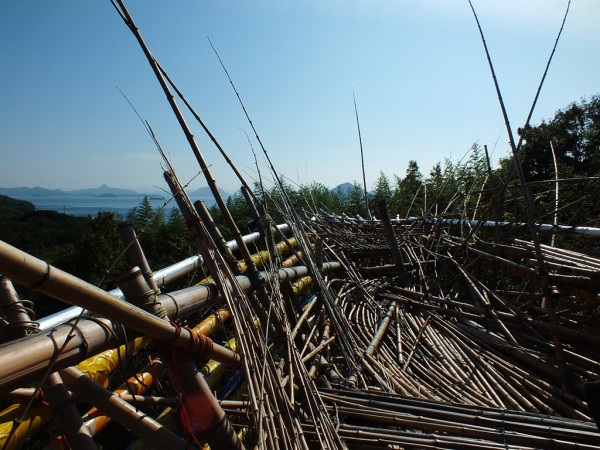 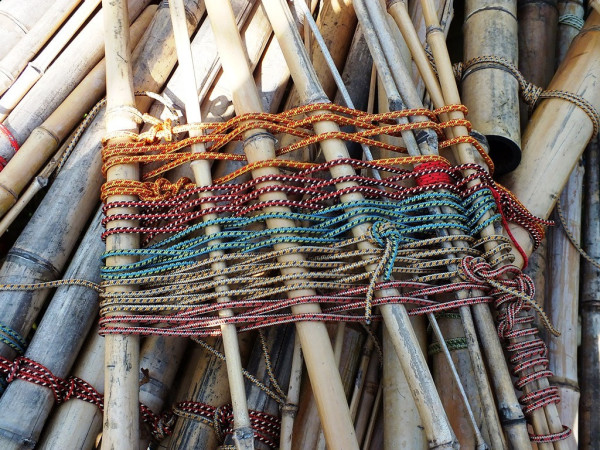 Unfortunately, the time to walk back down and leave Big Bambú arrived too soon. 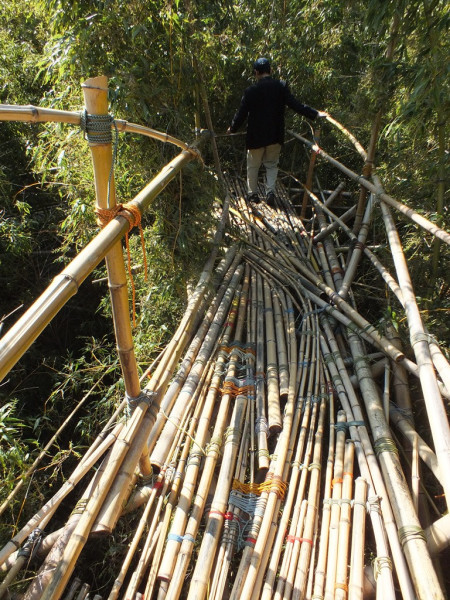 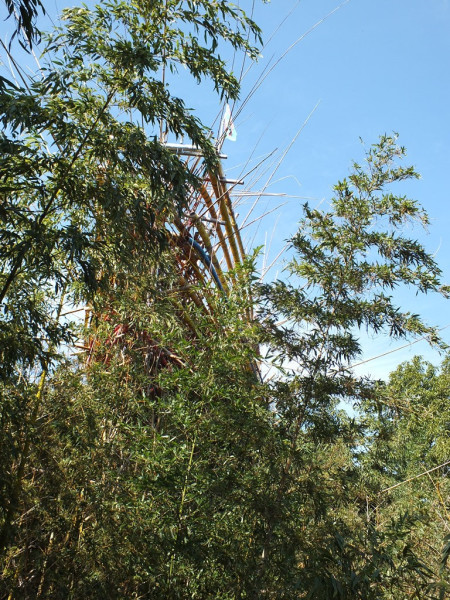 With Big Bambú, Teshima got another amazing, fascinating and unique place that redefines what art is and how it is to be experienced. 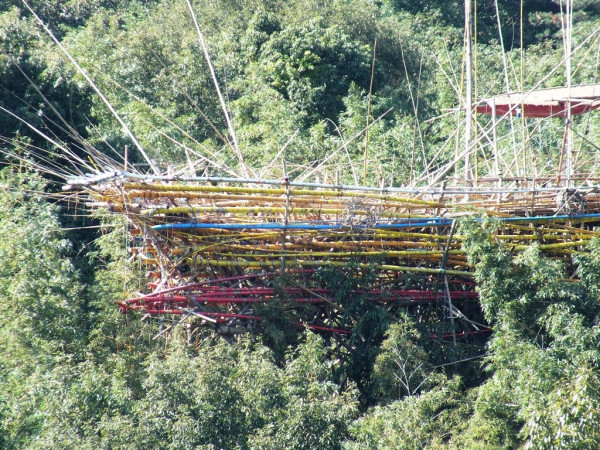 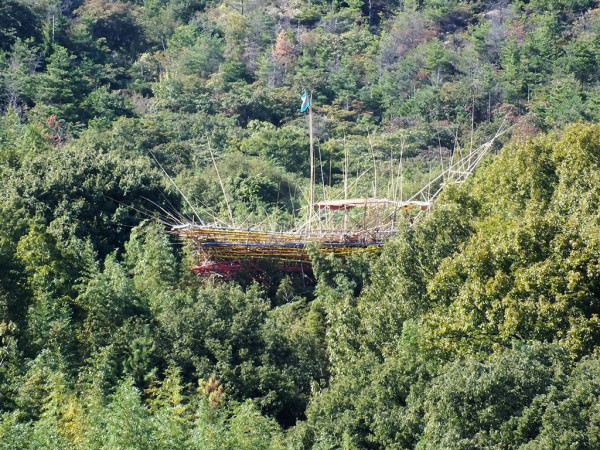 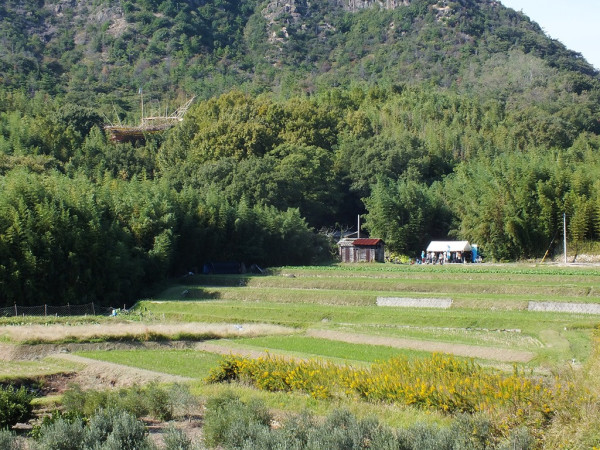 After the seasonal closing of winter, Big Bambú will reopen on March 21st. It should be open on Saturdays and Sundays from 11am to 4.30pm. (come back after March 21st to double-check the exact opening hours). Entrance fee: 300 yens.

Do not miss it if you come to the area.

6 thoughts on “Big Bambú on Teshima”