Today, we’re staying in Takamatsu (again, yes, I know that’s three posts in a row!) as I will show you some of the artworks that were available in town during the Setouchi Triennale 2019. Unfortunately, they were all temporary installations and are all gone now. Still, I thought that you may find them of interest if you’ve missed them, and they’ll be reminiscent of – I hope – good memories if you experienced them.

This post actually covers three days, July 20th (the same day as the Seppuku Pistols event in Shikoku Mura), July 30th (the morning before going to Oshima), and September 30th (coupled with Uno Port, not yet posted). They were respectively my 10th, 12th and 23rd days covering the Setouchi Triennale 2019.

We start with a sole artwork that was located in Shikoku Mura (more came a few weeks later). It’s by Ram Katzir and is simply called

Suitcase in a Bottle

Honestly, I don’t really have an opinion nor feelings about it. I think I get the idea. It’s nice. And that’s pretty much all I have to say about it. Actually, maybe the location was the wrong choice for it. There, in Shikoku Mura, right next to the vine bridge, it felt really out of place or something. If it had to be in Shikoku Mura, maybe it would have looked better in the other pond. However, a completely different location for it would have been better I think and would have made the piece more interesting.

Most of the other artworks in Takamatsu this year were located in the neighborhood called Kitahama, especially in Kitahama Alley, a set of former warehouses near the port that have been turned in trendy shops and restaurants. All the art there was grouped under the name of

One of the first thing you would notice (although it would depend on where you’d be coming from) were this series of plants in funny looking pots all around Kitahama Alley. 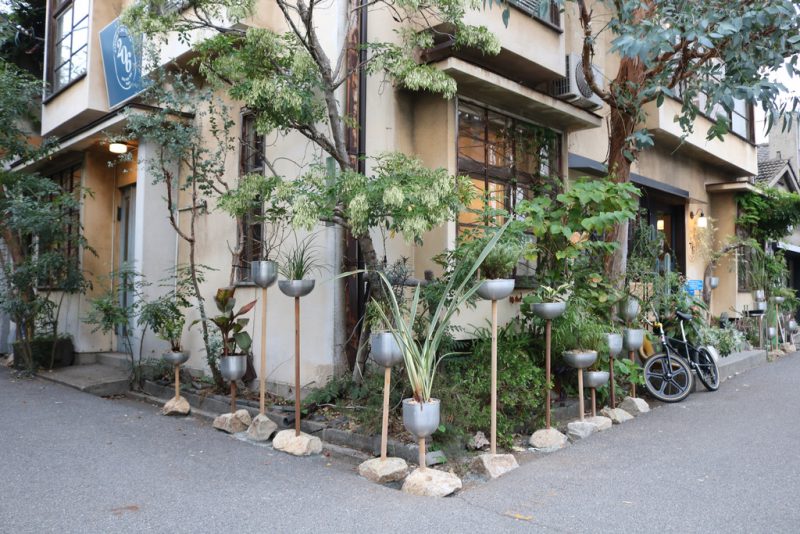 This is Dotted Alleyscape by Dot Architects that you may already know for building Umaki Camp on Shodoshima.

It was made by a Setouchi Triennale veteran who took part in every Triennale, this is Takashi Nishibori, who you may have already encountered on the blog. This artwork was a follow up to his first installation in 2010, Uchiwa Bone House. In consists of large “curtains” and other “sheets’ made of hundreds of “uchiwa bones” (the bamboo part of the uchiwa, a type of fan that mostly come from Kagawa prefecture), and it was simply stunning: 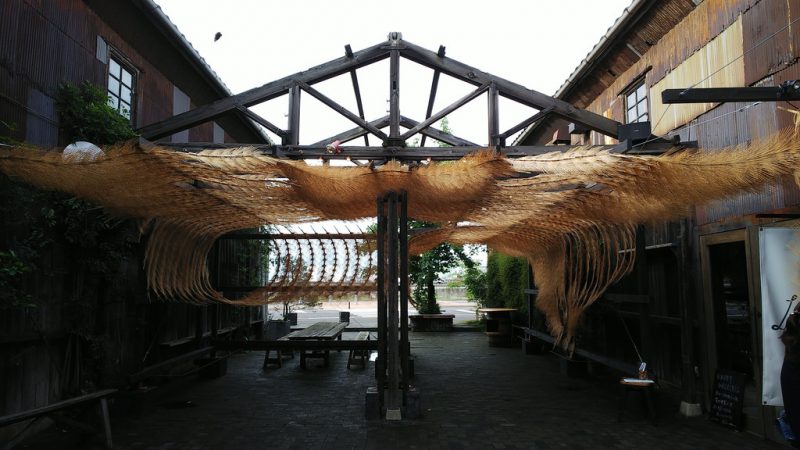 This new spin on a previous work (pun intended) really gave the edge that I always thought was missing to the alley. I wish it could have been permanent. Actually, I’m surprised it even held up so well from late July to early November, going through two (small) typhoons and quite some rain overall.

Sadly, I couldn’t meet with Nishibori-san this year, as he didn’t stay long and I was busy on the days when he was on-site setting up his work. Hopefully in three years.

Next, on the second floor of a building nearby, there were two very different artworks.

He is both a diver and a photographer, and his works mostly consist of black and white underwater pictures of various things, but especially of the damage we’re doing to the ocean, be it sunk objects, dying corals and such.

Very unique pictures of the water itself were glued on the room’s windows, which gave those green and blue hues to the room and the exhibit. 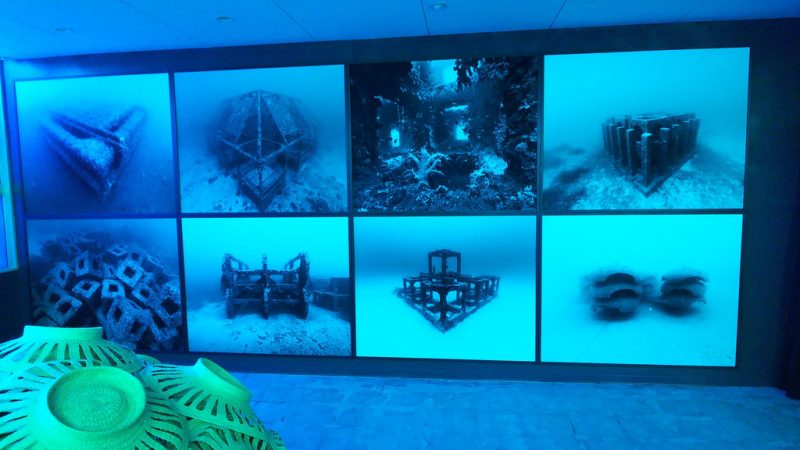 Oh, and those funny looking hats, also forming a big ball in the middle of the room, have the shape of coccolithophores, a type of phytoplankton that plays a crucial role in the carbon cycle of the oceans, and as such of the planet.

In the room, next door, a very unusual exhibit, and I won’t fight you if you’re not blown away by it.

I’m not going to lie, I think it did feel a little out of place in the Triennale, but I think the goal of some of the Takamatsu exhibits (you’ll see that again in a few paragraphs) was also to showcase things that are unique to Takamatsu and Kagawa Prefecture.

Indeed, this exhibit’s goal was not to blow you away with its installation, but rather to teach you about rare sugars, something that originates from Kagawa University. The exhibit was set up by Yasutomo Ota (I assume he did the big white cone with books in it) and Kaoru Oka (about whom I can’t find any information), in collaboration with the International Institute of Rare Sugar Research and Education.

It was mostly interesting on Saturdays when “Dr. Rare appeared“, that is a teacher and staff from the Institute who would explain about rare sugar and even let to taste samples.

If you want to know a little bit more about Izumoring and rare sugars, may I advise you to read this? 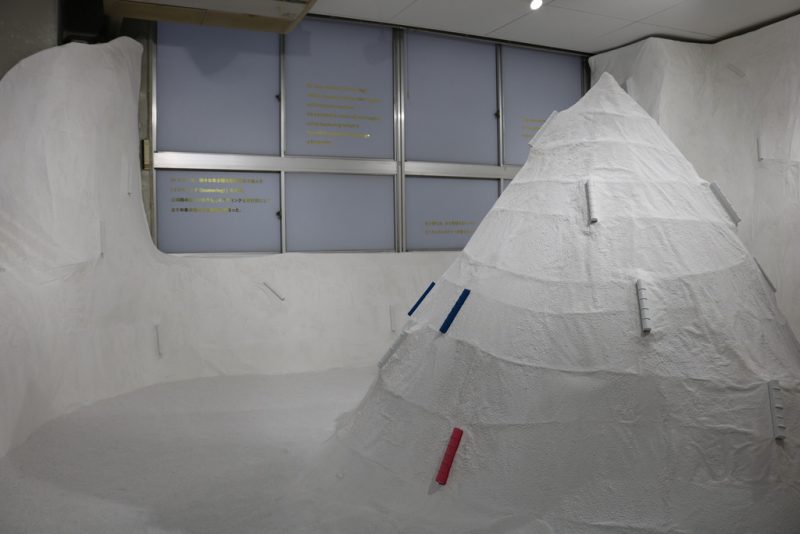 Our next stop is

Located in a narrow alley stuck between two buildings, it’s hard to describe this installation by something other than a hanging rock with things on it. I’m not sure what else to say about it. Unfortunately (for you) it looked much better and more interesting for real than on a picture.

The building on the right side of the photos above is a very nice café called 206 Tsumamu where you can find – among other things – delicious quiches and canelés (the latter being one of the specialties from my home region, I never expected to find some in Takamatsu – except my house when my wife bakes some – so that was quite a welcome surprise). I’m telling you all of this because the next two exhibits were located in a room right above the café. You literally had to enter the café to access them, which was rather unusual, but good for their business I assume (I had never heard about the café before and now I advise you to go, I guess it worked).

The next exhibit was simply called

which is pretty strange, as it featured much more than just urushi. I guess the scale of the project grew between the publication of the artwork list and the actual implementation, but the name didn’t or something like that.

In any case, let me start by telling you a little bit about urushi. This is what is usually called “Japanese lacquerware” in English. It exists in many parts of Japan, but Kagawa houses some of the most renowned artisans, including Yoshito Yamashita who has been named “living national treasure.” The city of Takamatsu also houses one of the few urushi schools in the country, a school that is also involved in managing Maison de Urushi on Ogijima (the house’s owner is one of the school teachers and possibly administrators).

And when It’s time to show you pictures, I realize with horror that I totally forgot to take a picture of the exhibit’s central piece! The urushi made by Yoshito Yamashita. Oh no! Sorry about that. 🙁

Ok, let me show you the other things that were on display. Along the wall, was a large drawing made by students from one of Takamatsu’s High Schools and that told the sad story of industrialization and consumerism that are killing traditional crafts in Japan. The story ends on a positive note, telling that early 21st Century manufactured objects can cohabit with traditional crafts. Sure, while true, the story was a bit simplistic, but the drawing themselves were stunning.

Below the drawing, were exhibited various traditional objects. They may not be unique to Kagawa, but they’re among the crafts that are still alive, renowned and respected in the prefecture.

On the top row, you have, from left to right:

On the bottom row, the first four pictures depict Sanuki Kagari Temari, traditional handmade balls, that used to be toys but are nowadays works of art. You can read this very old post (from the beginnings of the blog, really) if you want to know more, as well as this one. I may also tell you more about them in the future if my wife agrees (wink, wink).

The tigers are also traditional toys that are quite important in Kagawa’s culture for some reason. I really need to learn more about them one of these days.

On the other side of the room, a very unique installation, not exactly art, but quite interesting nonetheless. It allied two of the best things Kagawa has to offer, a very famous one, and a much less known one. This alliance took the shape of:

It’s what it says it is: a robot that serves udon!

It was made by Kagawa University students in robotics (they call it intelligent mechanical systems engineering, but I call it robotics, it’s shorter and roughly the same thing) under the direction of Hidenori Ishihara, one of their teachers. To my knowledge, none of my students (current or former) were involved in the project, but it doesn’t matter. It was quite great that students got to showcase their work to the world this way. It worked with a small raffle. You pulled a piece of paper from a box, and you could win an udon bowl. If you didn’t, you still could get a demonstration. 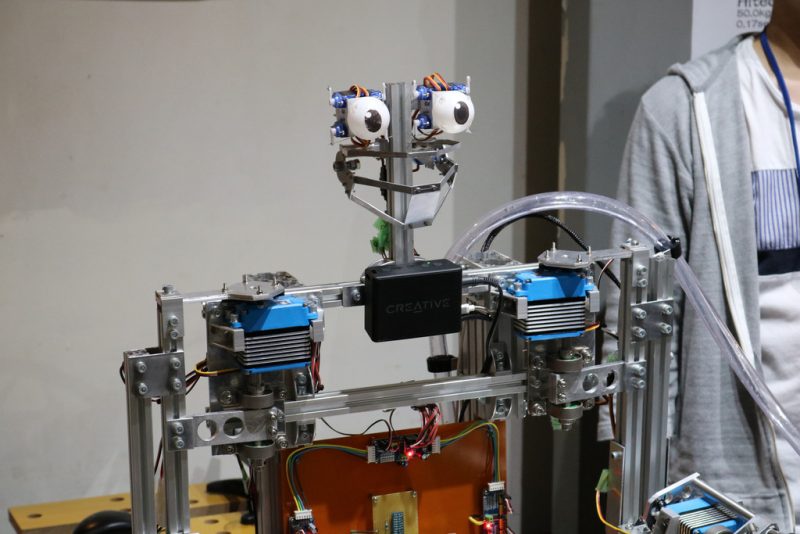 That’s all for the Kitahama Creators’ Studio. The project ended with the Triennale, and I have to admit that while at first, it seemed like an odd idea, I ended up really liking it, I even learned a thing or two about Kagawa, and I also hope people who visited it did too.

Another thing that took place in Takamatsu during the summer was

If I understood properly, Dommune is a club/radio/podcast from Tokyo and during the Triennale’s summer session, they stayed in Takamatsu. I listened a few times, especially when the Seppuku Pistols came, but radio has never really been a medium that interests me much.

The studio was open to the public at certain hours, unfortunately, I didn’t have my Triennale Passport with me when I happened to walk by, and I didn’t find the time to go again at a later date. In any case, the exterior and entrance looked like this:

There were a few more artworks in Takamatsu, most of them from previous Triennales and that have already been introduced in this blog.

I’ll end this post with a few last pictures:

That is the Triennale’s official shop and a car that is the “Takamatsu counterpart” to Esther Stocker’s Uno Port Line Art Project in Okayama.

Finally, my favorite artwork in Takamatsu, and one of my favorite in the entire Triennale: Lin Shuen Long‘s Beyond the Borders – the Ocean, that you probably have already seen on this blog or while visiting the Triennale, and that still is in Takamatsu Port for at least a couple more years.

If you enjoyed reading this post and would like to get more and/or thank me, there are

a few things you can do to support the blog