I rarely talk about Megijima on this blog for a bunch of reasons, mainly because it’s the least interesting island in the area… No, scratch that… It WAS the least interesting island in the area. Things are changing, finally. And for the next few weeks, you may expect a bunch of posts about Megijima, starting right now with the first post about my first visit of the island for the Setouchi Triennale 2016.

It was on April 17th, the last day of the Spring session of the Triennale. It was a crazy windy day; more than 50 km/h with some even faster gusts.

We started with the Oni Cave.

I’ve already mentioned the cave in the blog, you may have heard about it, maybe even visited it if you’ve been to Megijima, but truth is it’s not such an interesting place (when you think that just a few years ago, it was the only thing that was mentioned in many guidebooks as worth visiting on the smaller islands of the area). It’s really overpriced for what it is (500 yens… I’d say it’s worth about 100). And the old couple who manage it are some of the least nice people that I have met in Kagawa. Don’t get me wrong, I’ve met lots of people less friendly than them, but rarely in Kagawa.

So, going to the Oni Cave is more a duty than something I’m really looking forward to do. To give you an idea, it only was my fourth visit of the place, the previous one dated from the Triennale 2013.

But before we go any further, let me tell you about the cave itself in case you don’t know much about it. The Oni cave is an artificial cave located under the top of Megijima. Its origins are unclear. They’re most likely an ancient underground quarry that was later used be local pirates at the time those where common in the Seto Inland Sea. Note that those weren’t really pirates in the way you may imagine, “corsairs” may be a more accurate term. It later became famous when the legend of Momotaro was attached to it and it became the Oni Cave from the story.

When Megijima decided to develop tourism on the island, it decided to base it on that supposed link between Momotaro and the island. Megijima became the Oni Island for many people to the point that some would like to officially rename it Onigashima. Even if it never happens officially, many people do call it this way, and you’ll see the name here and there on the island). The cave attracted the tackiest plastic oni you can imagine before attracting tourists coming to admire them. It would have been interesting to take a historical approach of the site, it would have had great educational value to teach people about the local history… But no, somebody decided that roadside attraction style tourism was preferable to educating people. Oh well…

During the Setouchi Triennale, it also hosts artworks.

This is what you can see there until early November this year (some of the things are permanent, some are not).

When you arrive at the cave, you are greated by Ura, the Oni Chieftain (King?), as well as two other Oni, including a juvenile:

If you’ve never seen the Megijima Cave before, you’re starting to get an idea of what to expect, aren’t you?

However, as soon as you enter the cave, a surprise in the shape of the newest artwork there: Ogre’s House by Chaos Lounge. 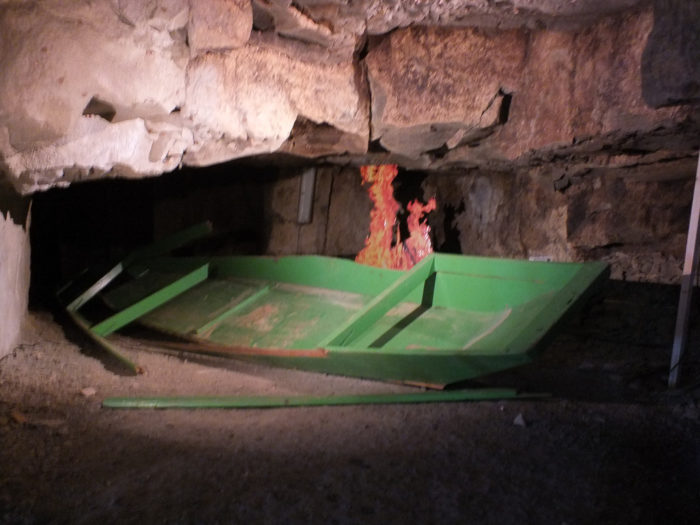 Near this rowboat, a video telling the story of all the things that one will find in the cave and the other Ogre’s Houses on the island (the project is located on three different sites: the cave as well as two houses in Megicho).
Here is a small part of the video to give you an idea of what we’re dealing with here. As a reminder the name of the artist group is Chaos Lounge.

Now, The whole Ogre’s House project is somewhat of an acquired taste, and I’m not a fan of everything in it, far from it. However, in the cave, may I advise you top watch the video until the end?
After this wild CGI segment, there is another one, with no special effect, no computer imagery, I’m not even sure there are any cuts at all, and it is – I assume – a major inspiration of the rest of the video. Let me explain.

Last February, as I was on Megijima, I met one of Chaos Lounge’s members who was already there to prepare the artwork (he was doing most of what is in the cave). As he was a bit bored in between working sessions (told you before, Megijima is not exactly the most lively place outside of summer), we invited him to go visit Ogijima the following week-end, as it was the Library‘s Inauguration and all. He did just that.

However, that day was one of the windiest days I’ve experienced on the islands. The Seto Inland Sea was in such a shape that I was really afraid that Meon (the ferry) would capsize, or least not be able to enter Ogi Port. This is what we were all watching with concern, and Yuuki Murai, the Chaos Lounge artist, filmed the whole thing. Meon finally entered the port fine (the pilot is really really skilled, he knows his boat, his ports, and this part of the Seto Inland Sea in and out), we could board and after some very scary few hundreds of meters, Megijima protected us from the wind and everyone got home safely.

The small video he shot is now the ending of that video one can watch in the Oni Cave. So, watching it, you’re seeing what I saw that day, as I was standing right next to him when he shot it. 🙂 And I regretted not filming the whole thing too, but I had to make sure my daughter wasn’t getting blown away and into the port by some sudden gust.

(Dare I say that my friend Jean and I have a small responsibility in the finished video? As if we hadn’t met Yuuki Murai, he wouldn’t have gone to Ogijima that day, he wouldn’t have experienced that wind storm and the final video would have been different)

The other work of art that one can see in Megijima’s cave is Oninoko Tile Project. This very fun and somewhat cute project dates from 2013 (but I missed it back then, even though I’ve seen some Oninoko pop up here and there in Takamatsu over the past three years). The project is permanent and helps making the cave a bit more palatable these days. It consists in more than 3,000 Onigawara made my middle school students from several schools in Kagawa Prefecture. 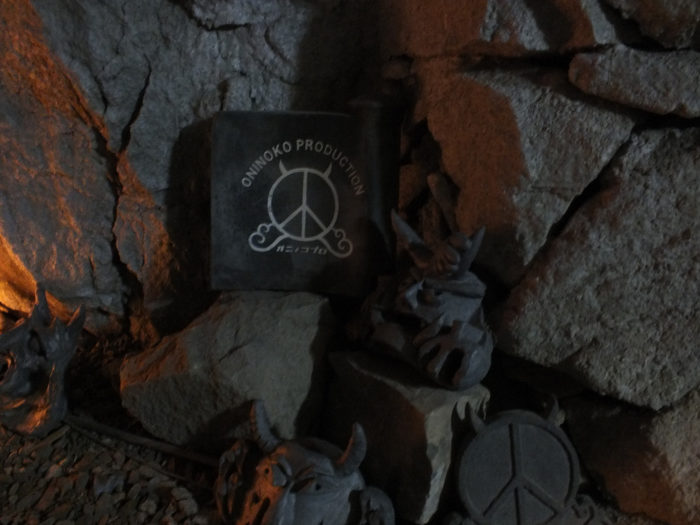 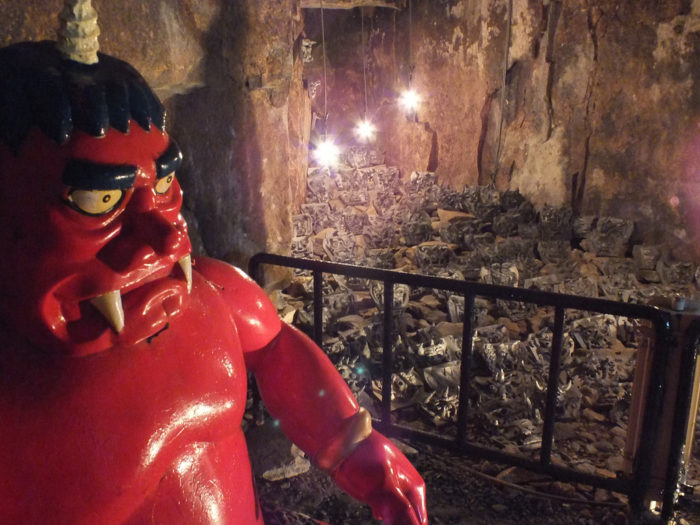 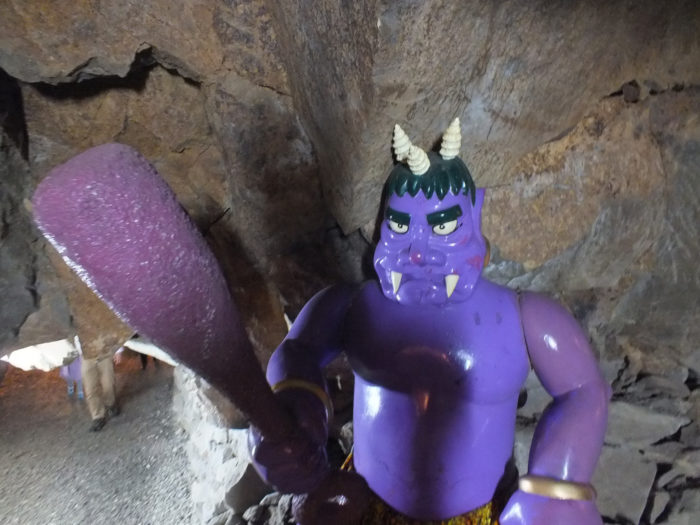 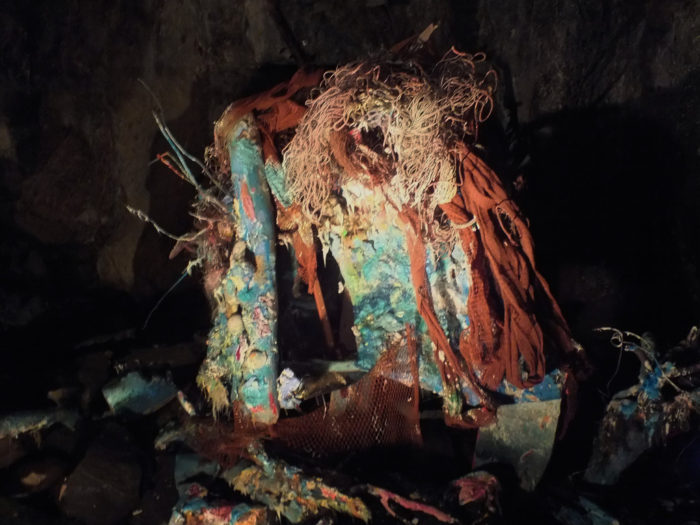 There are some weird things in Ogre’s House.
However, I think it’s a very interesting and contemporary take on the Oni imagery. 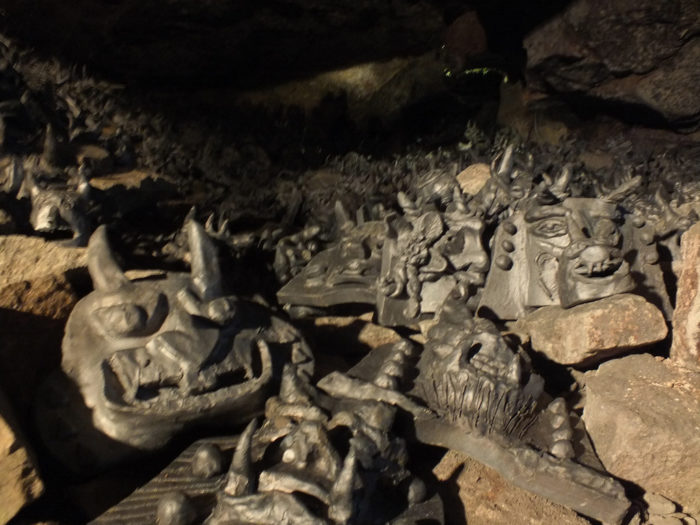 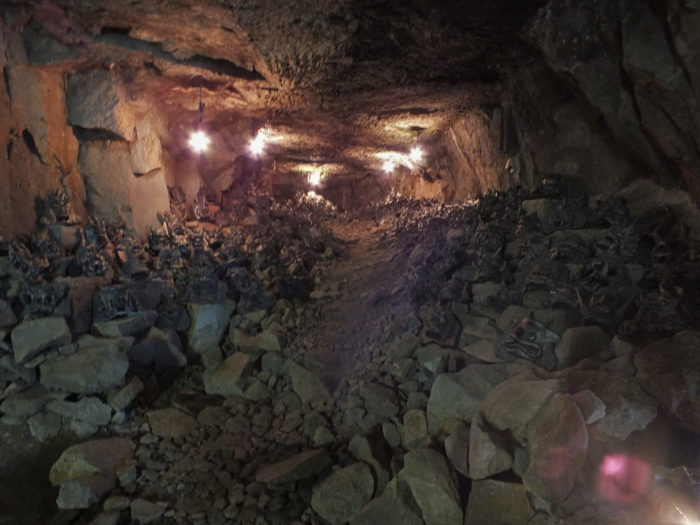 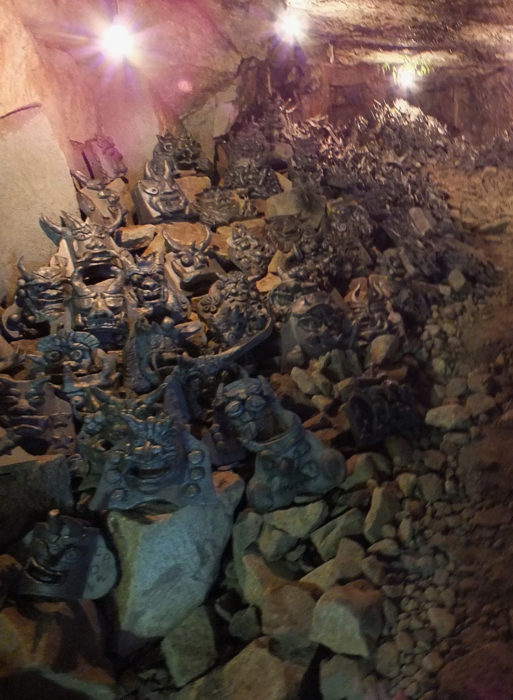 Interesting trivia: last month, one of my students made his end of semester presentation about the relationship between the legend of Momotaro and history. Great topic, I almost wished he had made a research paper about it instead of a five minute presentation (but that’ll be for another time, he’s only a sophomore and while he’s good at English, he’s not completely fluent just yet – he’s getting there).

So, of course, the Oni find their origins in history, and while they’re unclear, they were originally and most likely some immigrating tribes to mainland Japan (from today’s Korea) in the later days of the Jomon Period (the Japanese neolithic if you want, that ended quite late around 300 AD).

Ura would have been some sort of Korean warlord who settled in Western Okayama. Apparently, he was very tall, strong and violent. His weapon of choice was a metal club/rod (a constant among Oni descriptions), a very rare weapon at the time. I could be wrong, but I think those Korean invaders are the ones who brought metal to Japan. Kibitsuhiko-no-mikoto, the young son of the emperor at the time is supposedly the one who defeated him and restored imperial power in the area (and peace?). That story gave, centuries later, the legend of Momotaro.

After visiting the cave, we went to the lookout / park on top of it, that offers some wonderful views of the Seto Inland Sea: 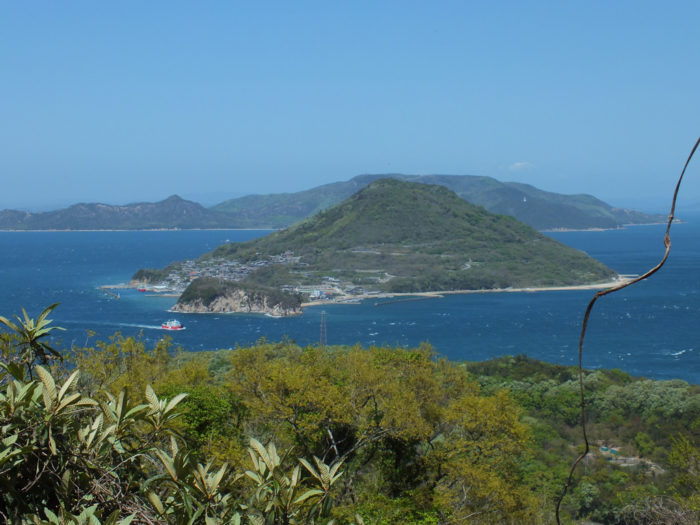 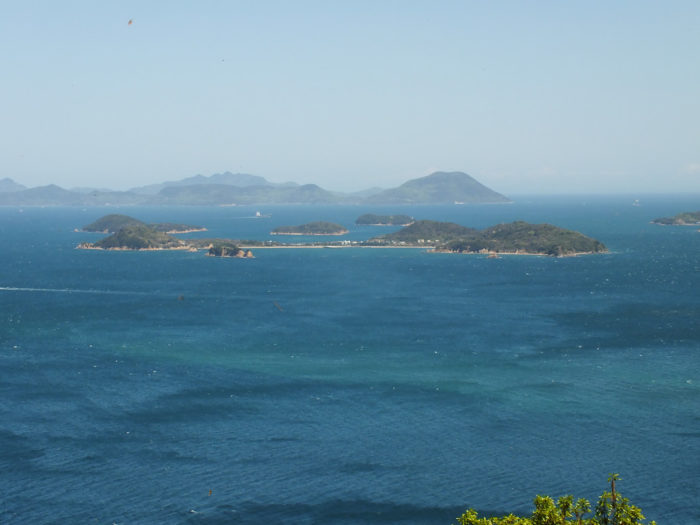 Oshima (and Shodoshima right behind) 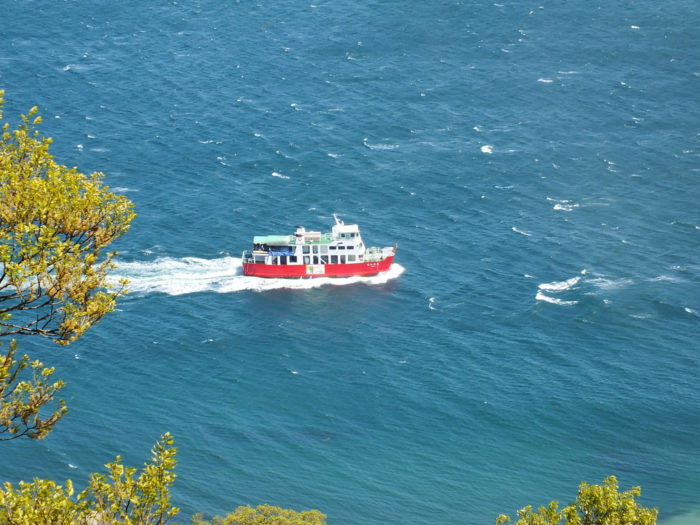 Meon arriving to Megijima and facing the strong winds in the process.

Funny how I just talked about that day with very strong winds and it also was a very windy day. 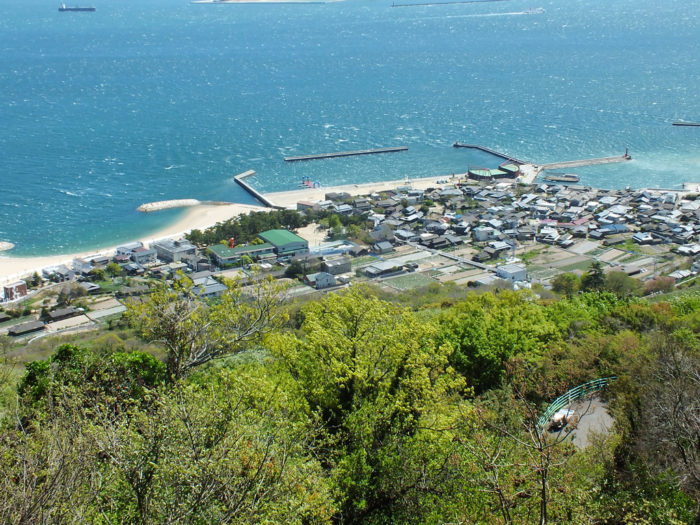 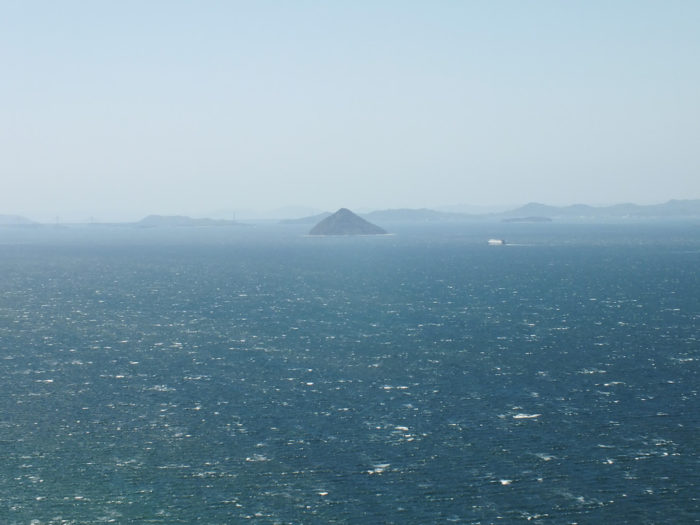 Ozuchishima, Okayama, and one can barely see the Great Seto Bridge too. 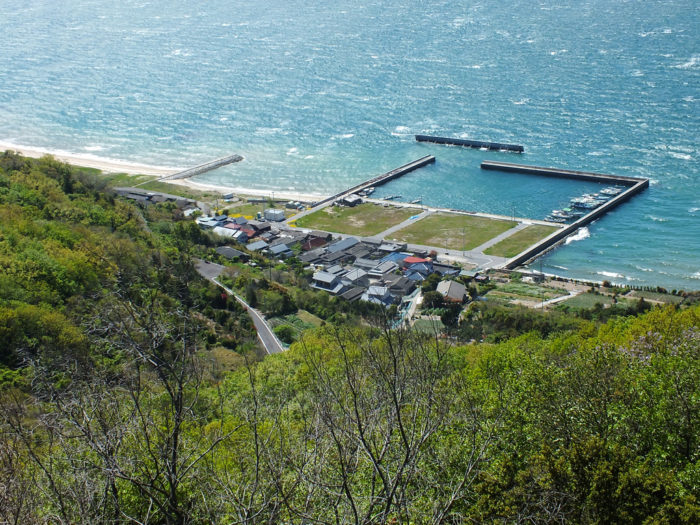 Nishiura, the second, very small village of Megijima.
I have yet to go, but I will soon as it now has an artwork too.

OK, that’s all for today and Megijima’s Oni Cave… We’ll return very soon to Megijima with more goodies. Remember, I still haven’t told you why the Seppuku Pistols were on the island, I also need to show you the new art that’s on the island this year, and we also have a very special guest coming to the blog… and that’s only the Setouchi Triennale related stuff, there is something else happening on Megijima in September and October that I need to tell you about.