There are two aspects of the Setouchi Triennale that I seldom talk about on this blog – mostly because until recently I rarely had the occasion to attend them, and as far as visitors are concerned, they’re rarely aware of them and only stumble upon them randomly.

I’m talking about the Triennale’s events (artistic performances for the most part) and workshops.

For the events, I mentioned one very recently (and I’ll talk more about it soon).

For the workshops, how about, right now?

As the name strongly implies, the workshop consisted in painting a flag, or rather a piece of a flag that would become a patchwork-flag later.

Every participant receives a square of fabric that was part of a larger flag. Everyone is free to paint it as they see fit as long as they don’t mess with the design. When every part is completed, they will be sewn together into a larger patchwork-flag. It will be used for the festival’s closing ceremony on Ogijima this November. (if I’m not there, that’d mean something very bad will have happened)

When I heard about this workshop, I signed up in a heartbeat (because Ogijima, because Team Ogi, because Onba Factory) forgetting one thing; I’ve never been too good with painting.

All in all, I managed to not mess up, and it was a very fun and instructive experience, quite relaxing too, and finally some of my painting will hopefully stay on Ogijima more than a couple of days (*cough* school fence *cough*). Oh and one more positive thing: I really was on my own at the workshop; Yasuyo wasn’t there and not a single English or French speaker in the horizon, and I managed to understand what was going on for the most part. So, “yeah me” for that!

Here are a few pictures of the workshop (very few, I was busy painting): 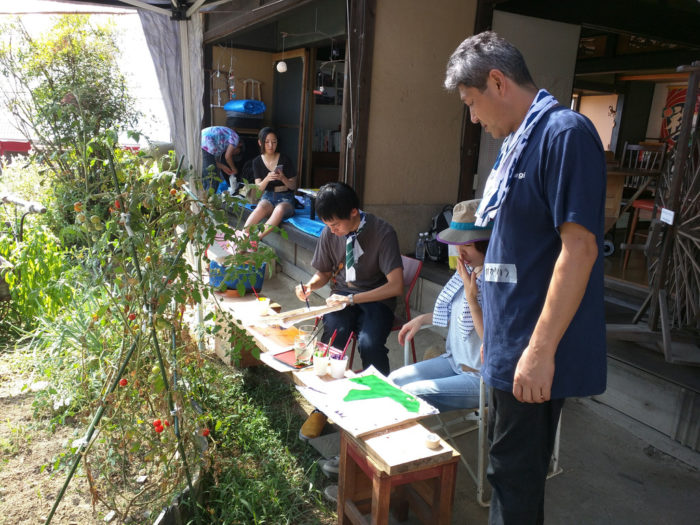 Let me introduce you to Okawahara-san, Team Ogi member. He’s one of the few remaining (maybe the last one?) artist in the area who still makes traditional fishing flags, that is hand-painted following various traditional techniques as opposed to printed. His work was the inspiration behind the workshop (as well as behind many of the things that Team Ogi does). 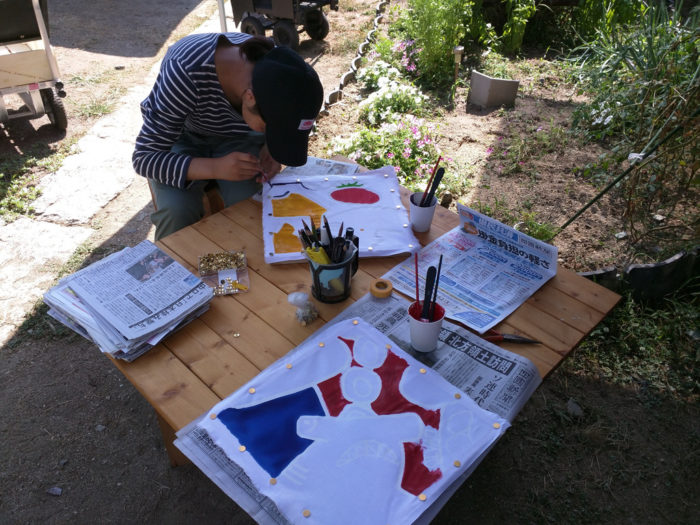 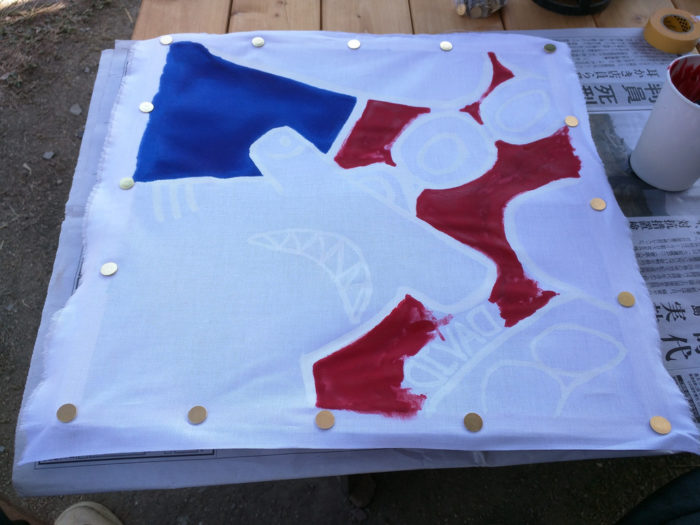 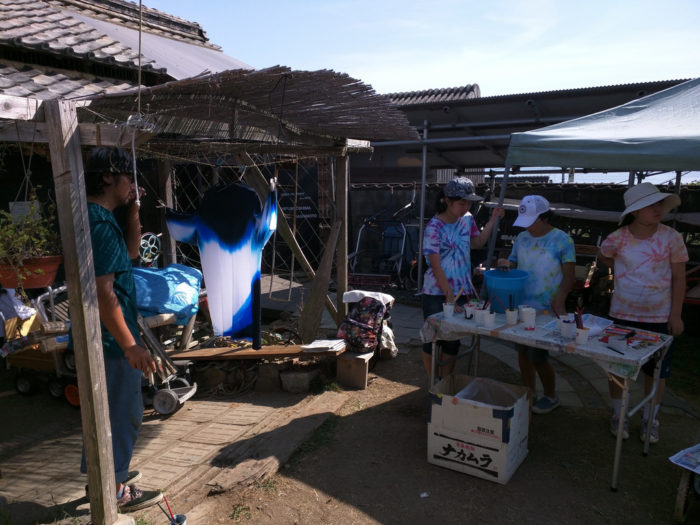 As the workshop was slowly coming to an end and as we didn’t really need our “instructors” help anymore, Hashimoto-kun (Team Ogi and Onba Factory member) decided to paint a white T-shirt, just for kicks. Here is the awesome design he did, in just a few minutes. 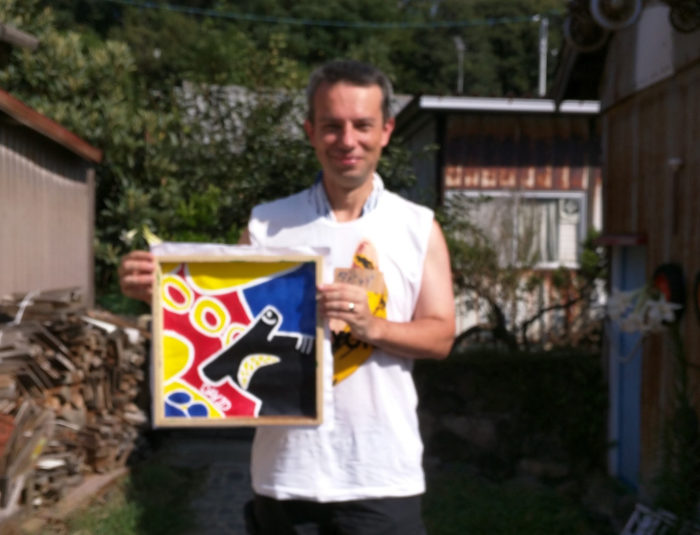 I didn’t think it was possible to make blurry pictures with smartphones. I guess it is, as the young woman I asked to take this picture showed me. I also had to reframe it, one does not need to see my entire body when I’m showing an object near my chest… That will teach me trusting strangers with my pictures and not checking afterwards and before it’s too late. 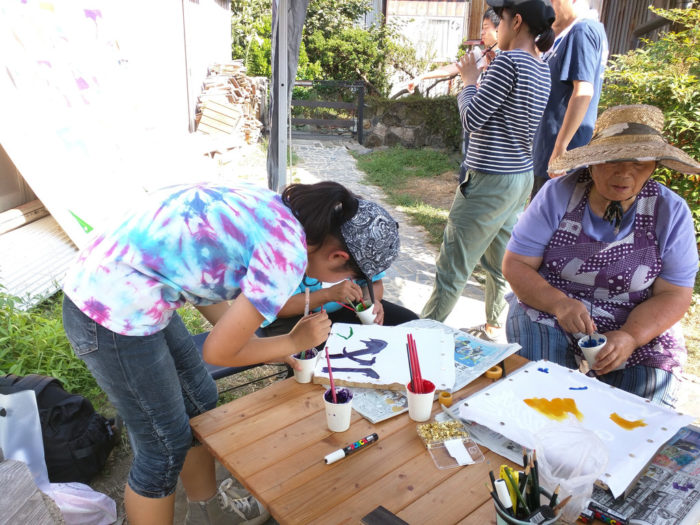 Later, two of Ogi’s bachans came to give it a try too. 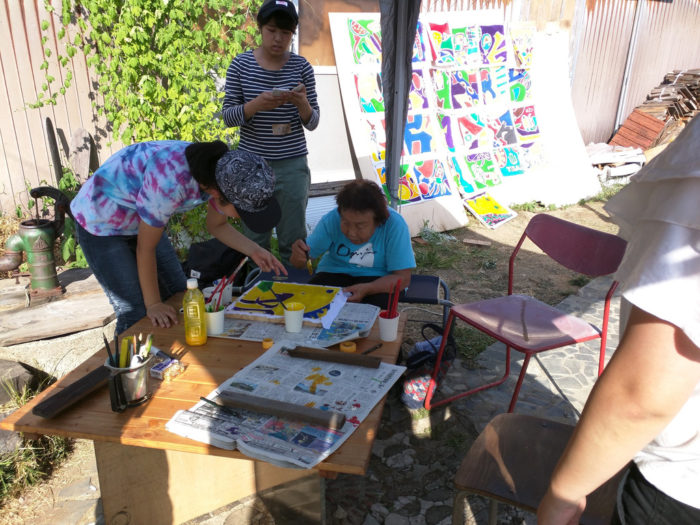 And here is the almost finished product (you’ll have to wait a little more to see it actually sewn and ready to be flown): 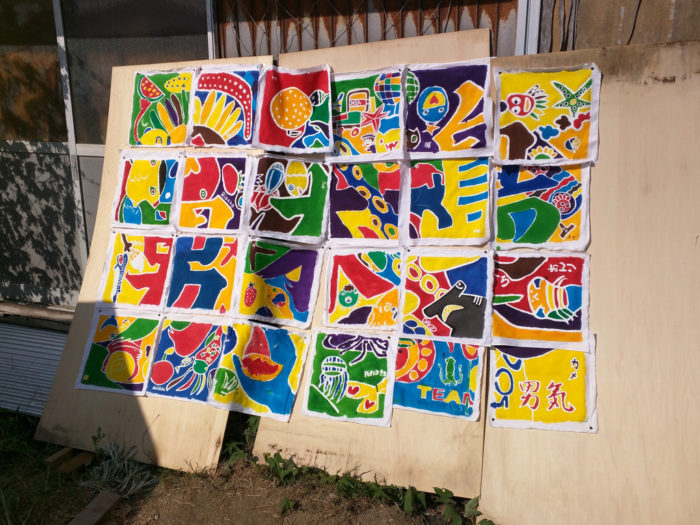 Thank you again Oshima-san, Okawahara-san, Hashimoto-kun and… er… I forgot the other team member’s name as I didn’t really know him (as opposed to the former ones whom I know very well).

And on a completely unrelated note, did you know that Ogijima is also a pretty (locally) famous fishing spot?