I’ve told you about Konpira-san before, several times. But it’s not a reason to not do it again more or less regularly.

In case you forgot, a few details about it. Located in the town of Kotohira, and also know as Kotohira-gū, Konpira-san is a large shintō shrine (actually several shrines merged into one) on the side of a small mountain.
Founded in time immemorial (probably in the 1st Century AD), it has attracted tourists and pilgrims for many centuries. It’s mostly famous for its 1,368 steps to the top, although most visitors only climb the 785 steps to the main shrines, either because they don’t have the courage or energy to go to the top, or because they mistakenly believe they’ve reached it.

Today (as well as in the – hopefully – near future) I’m going to try something new (don’t expect something revolutionary nor mind-blowing). During my last visit of Konpira-san, one year ago (already!? time for a new one soon) I took so many pictures that I never found the time to sort them in order to publish some of them here. It got worse when I “borrowed” those taken by my parents (as they were present, it was their first time in Japan). So, a few days ago, I thought that instead of doing that and write a post that would look a lot like the previous ones on the topic (I may love the place, but there are only so many things you can write about it from a descriptive point of view). So, this time, with the exception of pictures that are too ugly or too uninteresting, I will post the large majority of the ones that were shot that day. And instead of telling you about it, I’m going to show you as much as possible; some sort of photographical visit of Konpira-san if you want. It will be separated in several posts, each focusing on one section of the place.

So, let’s start today with the beginning of the ascension, roughly from the very first steps to the main entrance gate.

Actually, it doesn’t exactly start at the very first step but rather from the first torii. One day, I’ll have to take pictures of the many tourist shops that can be found at the bottom of Konpira-san. A strange mix of nice arts & crafts shops on the one hand, and terrible tacky souvenir shops on the other hand. And let’s not forget the many shops where you can buy many different kinds of snacks and other food, after all, we’re in Japan, no tourism is possible without food being involved here. 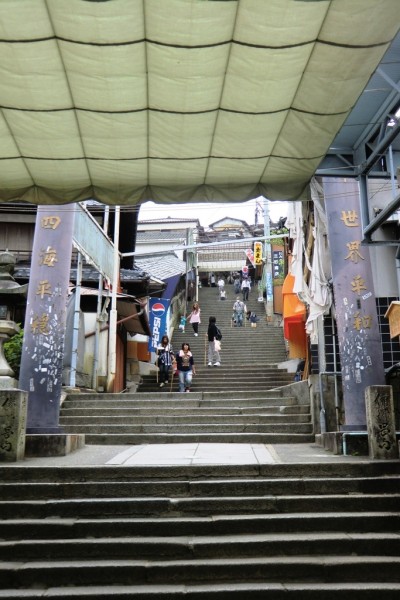 Note the “drapes” covering the streets to protect people from the sun. Actually it was not sunny that day, and now that I think about it, I don’t think I’ve ever been to Konpira-san on a sunny day (hence the crappy colors and lights on the pictures) 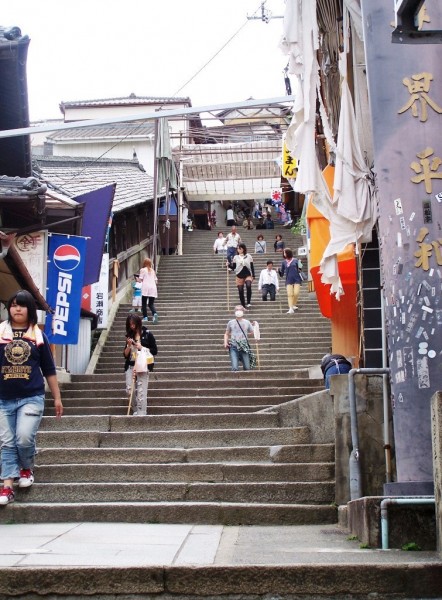 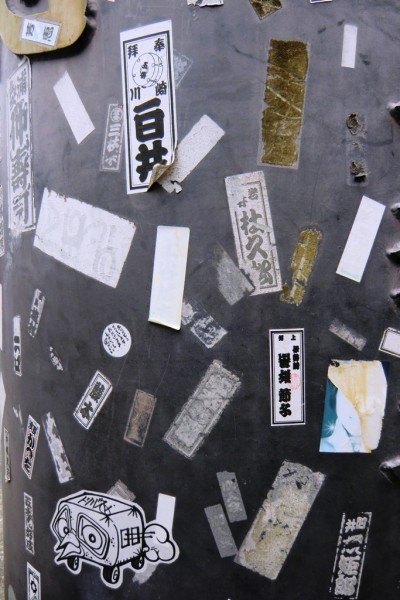 The stickers on the torii are a common feature on pilgrimage places in Japan. Some sort of legal and socially accepted graffiti. It’s true that it’s a much better idea than engraving your initials in a thousand years old monument. 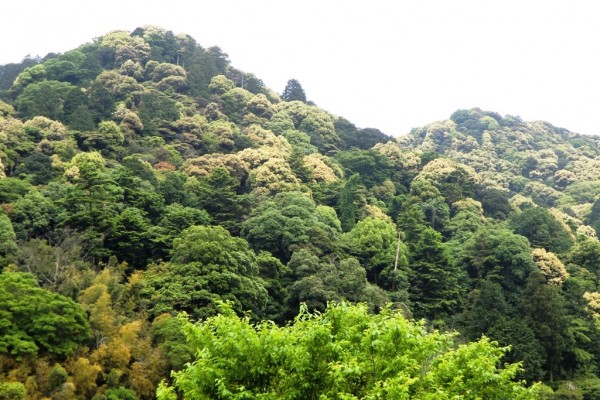 Something really intrigued me that day about the forest. Some trees were yellow, very yellow. But we were in May, not in a Fall, a bit higher in the mountain, I understood what that was all about; the trees’ flowers were in bloom. You’ll see what I mean in a future post. 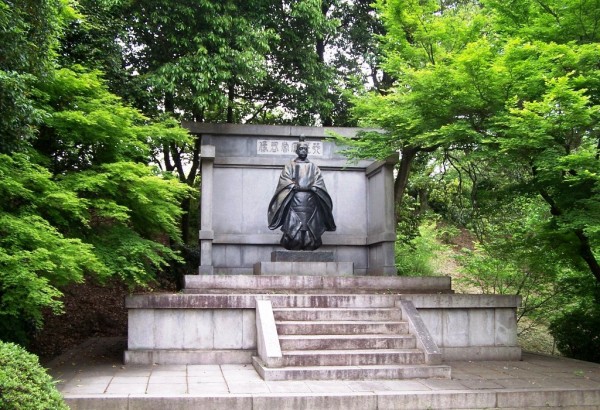 If I remember correctly, this is the statue of the man who rehabilitated Konpira-san during the Meiji period as it had fallen in disarray some time before that. Also, it’s interesting to notice that Konpira-san used to be both a shintō and a buddhist place of worship until it became (almost) exclusively shintō upon restoration. 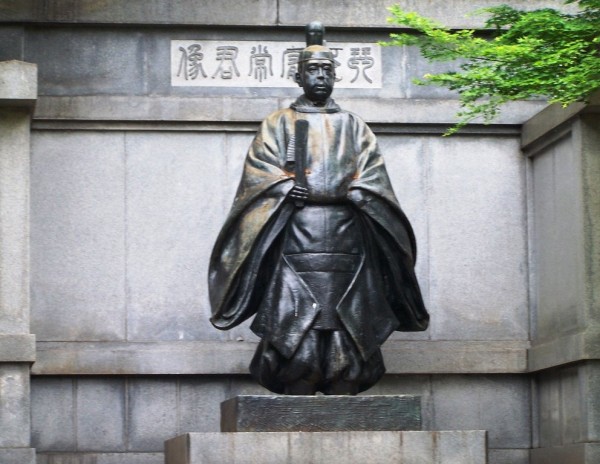 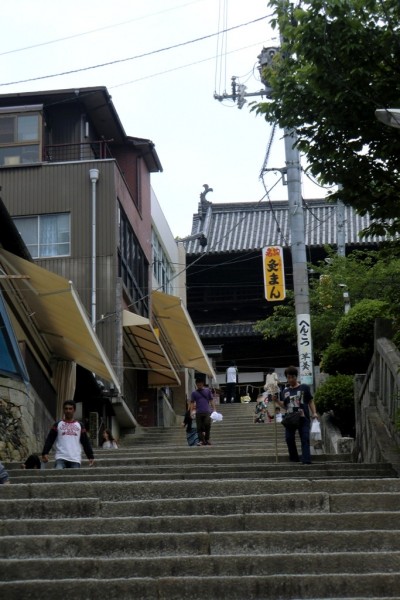 After that set of steps, there is a small landing with a small shrine in the larger shrine: 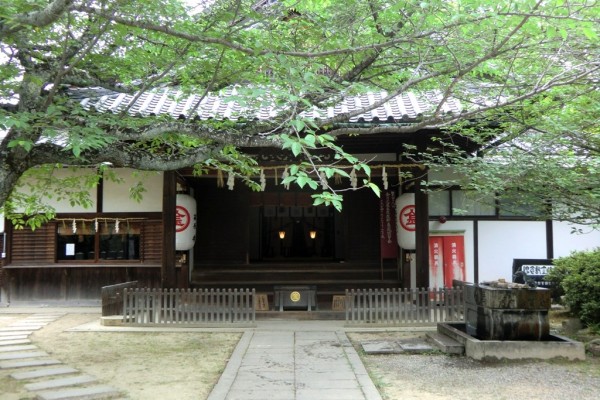 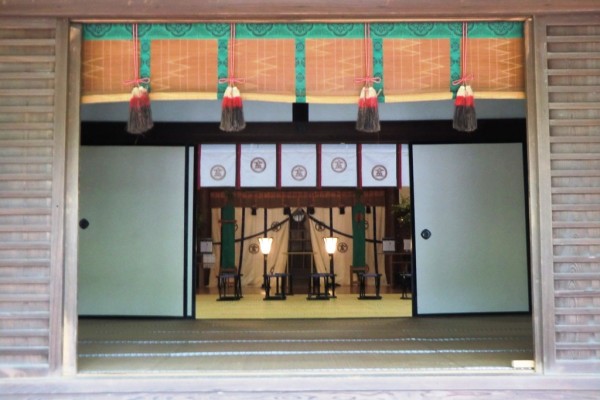 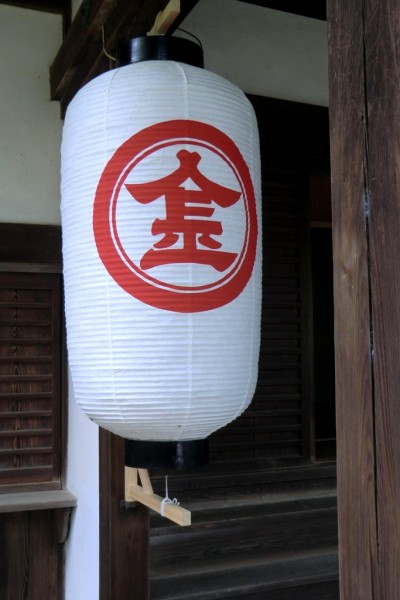 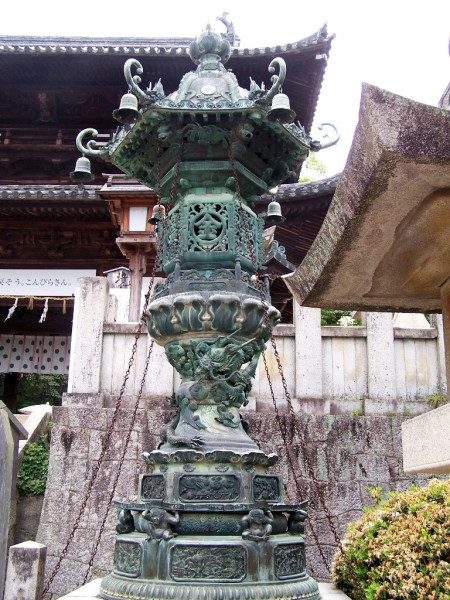 This lantern is pretty impressive and amazing. If I remember correctly, it’s some sort of “items of high cultural importance” (forgot the proper appellation sorry). 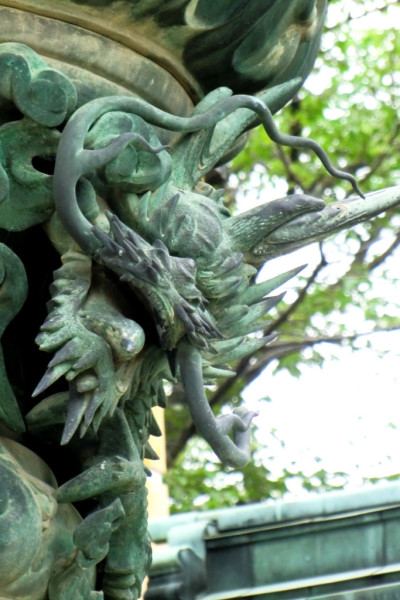 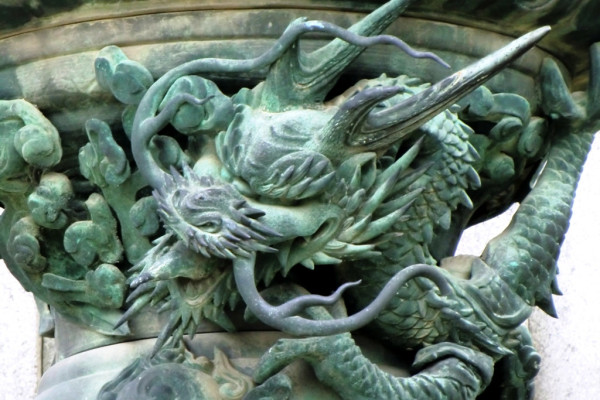 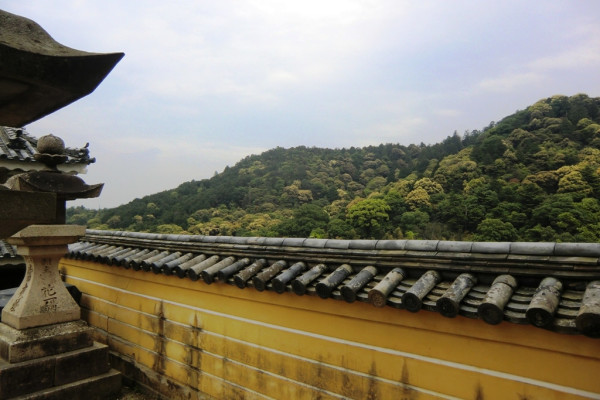 And soon, one gets to this large gate that is the actual entrance of Kotohira-gū. 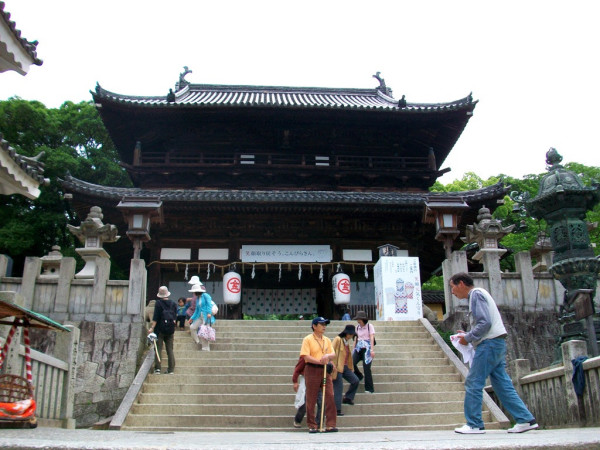 I could be wrong, but I think these types of gates are usually for buddhist temples. It may be related to the fact that Konpira-san used to be for both religions before. 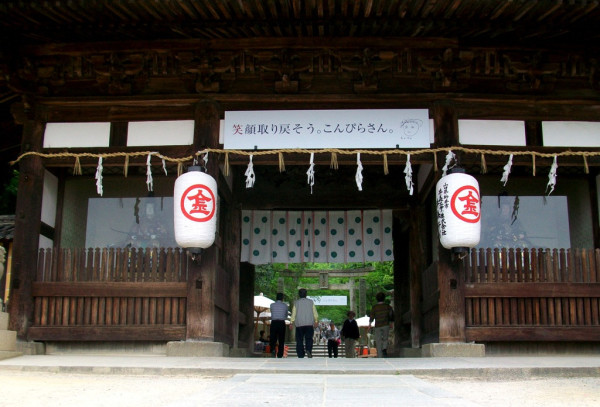 These two statues are sitting in the spot where Niō are usually found. I need to research their significance. 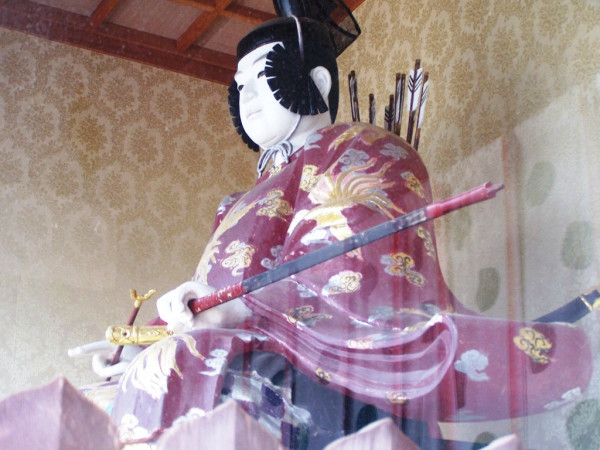 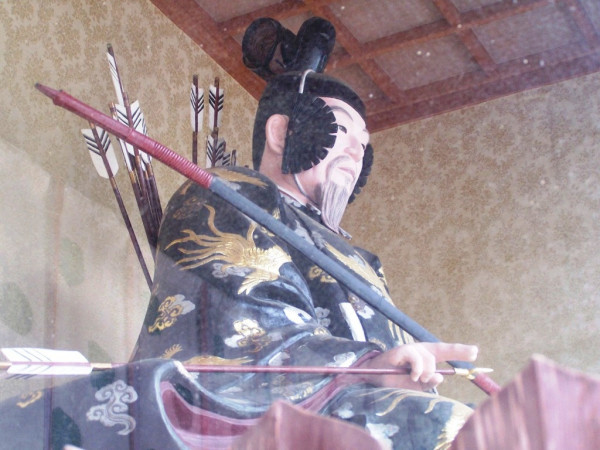 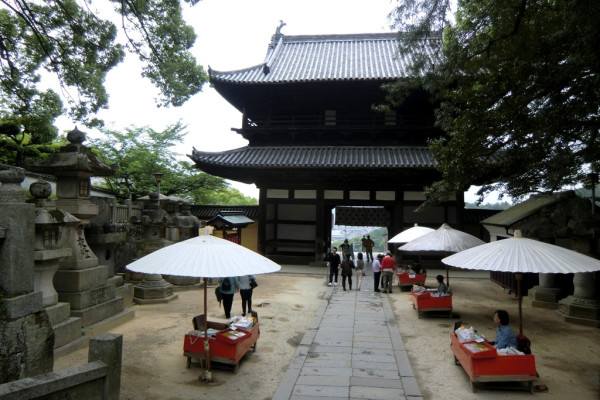 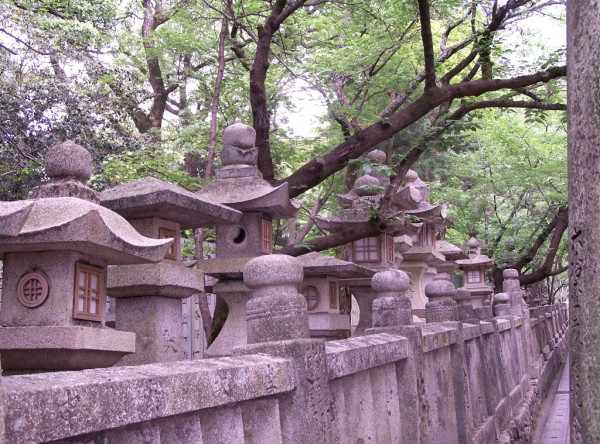 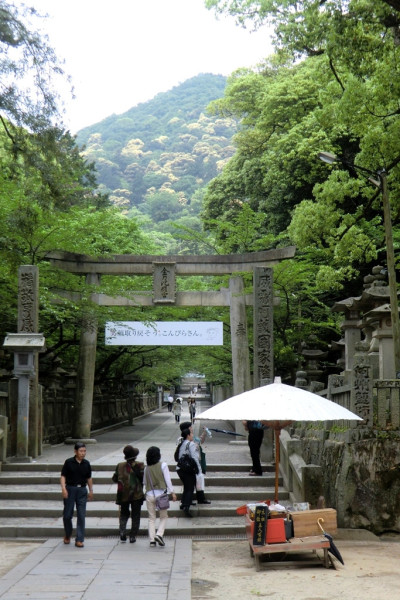 On the other side of the gate, this torii marks the beginning of Konpira-san‘s second “section” that I will show you very soon.