On our first trip to Teshima, we didn’t see all of the works of art (and only one of the three villages) so we had to go back.

Going to Teshima on a Saturday was a risky idea. See, the festival organizers had seriously underestimated the number of people it would attract (they were hoping for 300,000, and I think that a week before the end, the number was closer to 800,000) and that could be felt on some places, especially on Teshima, where the brand new Teshima Art Museum had just opened on October 17th and as there are no big ferry to Takamatsu, just smaller boats. Consequently, it can be hard to get there, and it can be even harder to leave the place. Two days earlier, we got lucky and were some of the last ones that could get on the last direct boat from Ieura to Takamatsu, dozens of people being left behind (don’t worry about them, they were no stuck there, there were other ways, less convenient ones, to leave the island).

The second time around we didn’t encounter one single problem, we royally managed our trip! Just like two days earlier, we didn’t even try to go to Teshima on the direct boat from Takamatsu, but decided to go via Tonosho (on Shodoshima) to Karato, the village where I had met those amazingly wonderful people (I know, I haven’t told the details of the story yet). Actually, if I really wanted to return to Teshima, it was as much because of the places that we missed as because of the people that we met.

It didn’t take long. Even if, sadly, I didn’t run into any of the people that I had met two days earlier (we didn’t spend enough time in Karato for that) but, as we were waiting for the bus to Kō, an old lady just stood in front of us and started to chat with us for no other reason than she was happy to talk to new people, especially foreigners. She was 87 years old (she informed us that she was born in the year Taishō 11!) and she was very happy to see all of those people on her island. We got separated on the bus, but once arrived in Kō where she lived, she made sure she told us about all of the artworks that were located in her village so that we didn’t miss any. Then she wished us a good trip and hoped to see us again in three years, when the next Festival should be held if all goes according to plan. 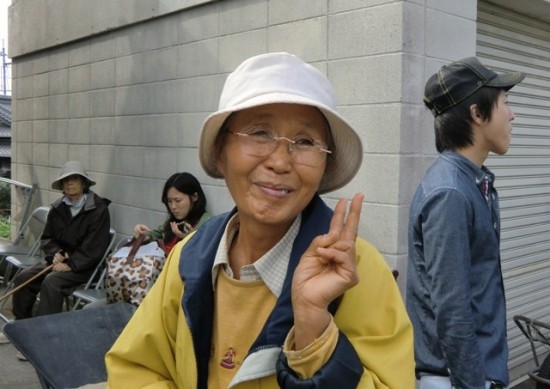 87 years old, I’m telling you.
In other terms, it’s so true that being happy in life
and kind to people will keep you young.

In Kō, there were the following works of art: 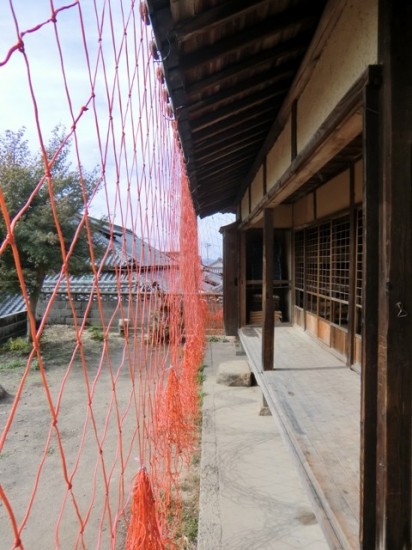 When I read on the official guidebook that this works consisted in a house covered with a fishing net I thought it was a bad joke. I almost didn’t go to the place. That would have been a grave mistake, because this piece is much more than a house in a fishing net. It’s a house/installation in which every element is designed from things found in the house –that was abandoned- including a cupboard with “harmonica drawers” hence the name. 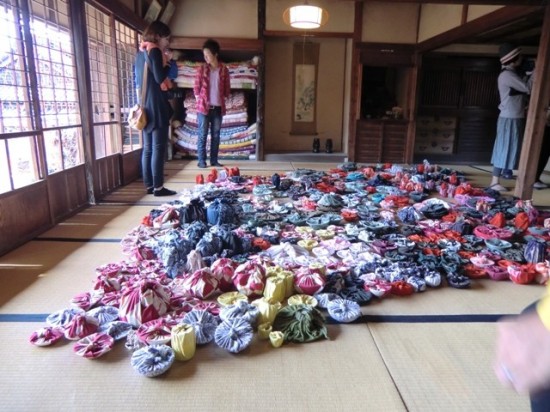 There were also all of those bowl packed in pieces of cloth.

First, it seemed like a very abstract thing, but if you look more closely you’ll realize that it actually represents the island of Teshima itself, with its elevations and even its different features; different colors in the cloth representing different aspects of the island (forests, villages and more).

The house has other various smaller elements here and there, and in the end the artist with this work actually pays a beautiful homage to the people of the island. 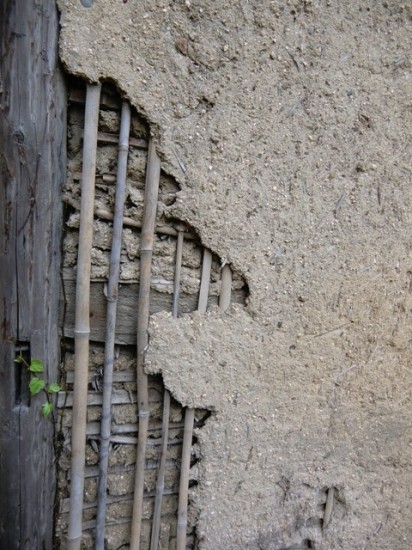 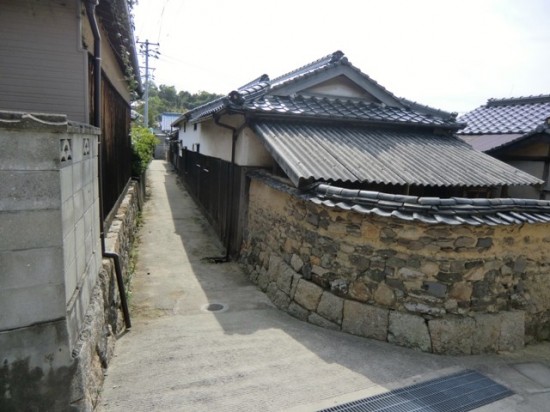 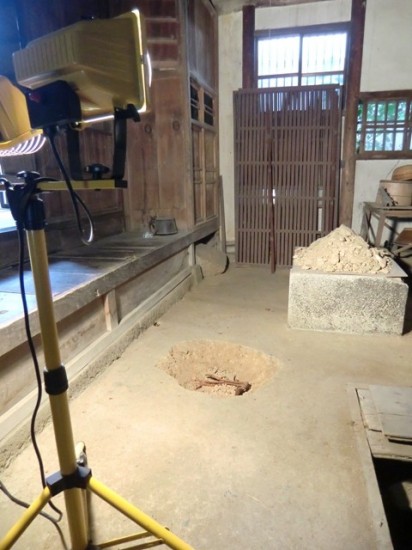 Luck Exists in the Leftovers by Claire Healy & Sean Cordeiro

When entering the house, one finds this pretty unusual setting:
an archeological excavation.

Then, in the next room: 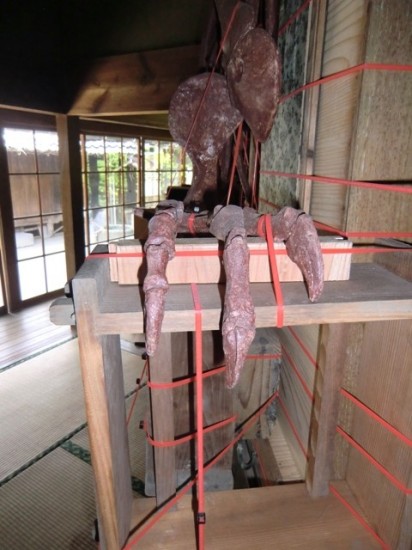 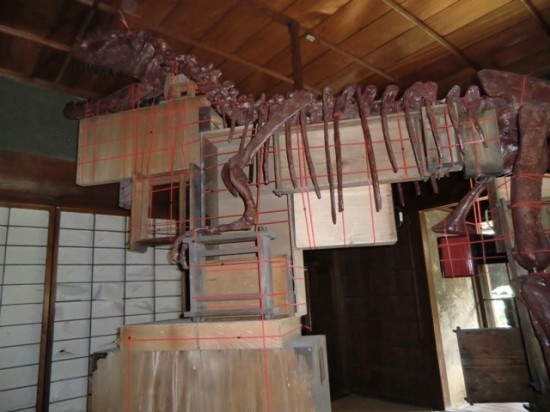 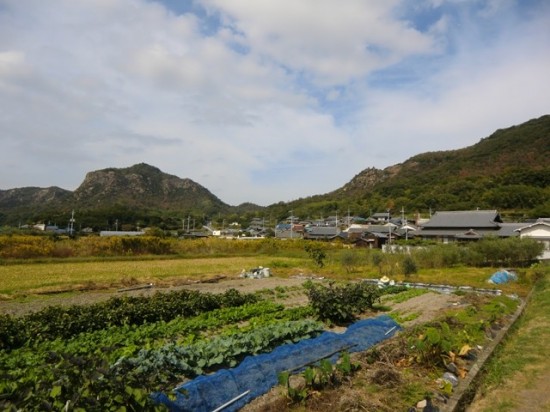 The village of Kō, on the South Coast of Teshima. 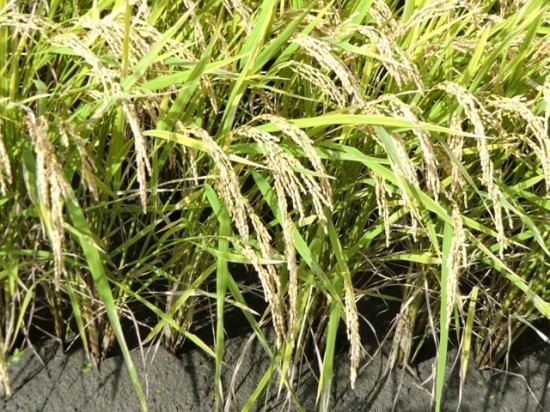 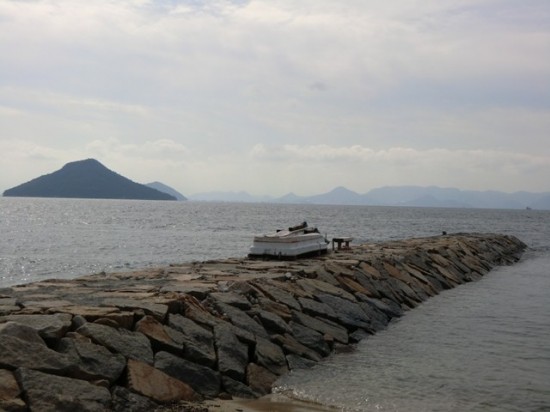 That piece doesn’t really look like anything: an upside down boat with pipes on it. It is because this piece of art is not a visual one but an audible one. Indeed, the pipes are some sort of homemade organ pipes and the installation produces music constantly. The musician? The sea itself. The piece that is being played? The concert of the waves and of the tides. May not become an instant classic, but the result gives you a warm feeling and the strange sentiment that the sea sings to us.
(notice Ogijima in the background) 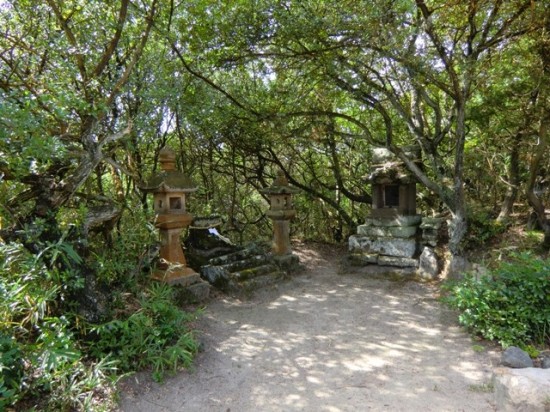 A small Shintō shrine on a hill next to Kō’s port. 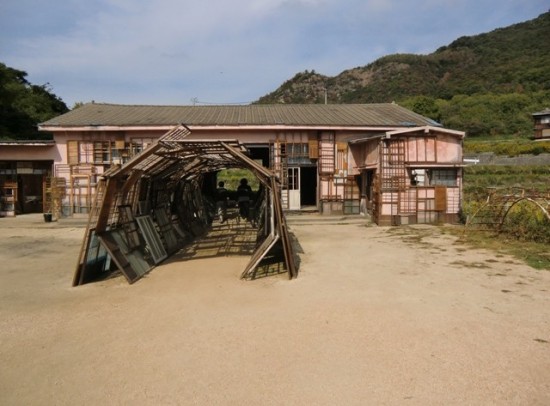 I’m not too sure about the concept (to honor the memory of the people from the island through old abandoned doors and windows reassembled to form this tunnel) but I like the result. 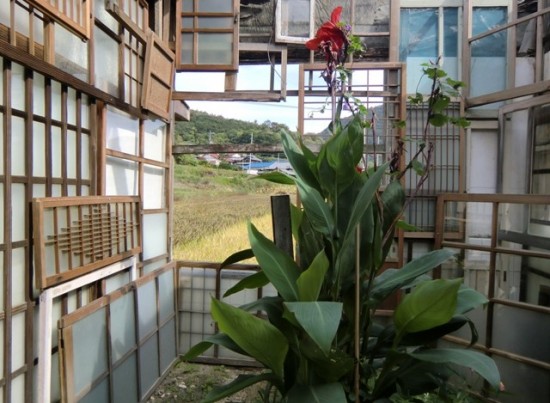 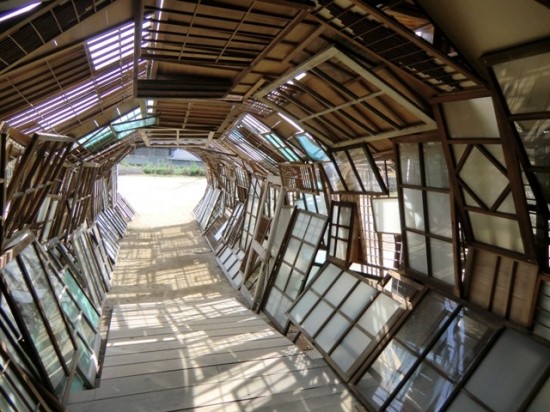 After that, we reluctantly left Kō, to go to Ieura (pronounce: “ee-eh-oora”) where the last part of this visit of Teshima waited for us. The next stop was this house containing various works by Tadanori Yokoo. Those were more or less interesting and I’m not sure of their names. 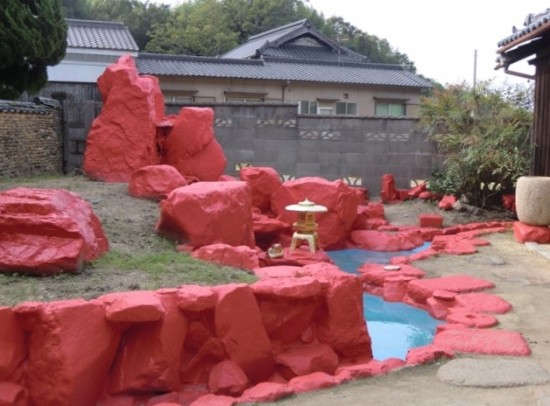 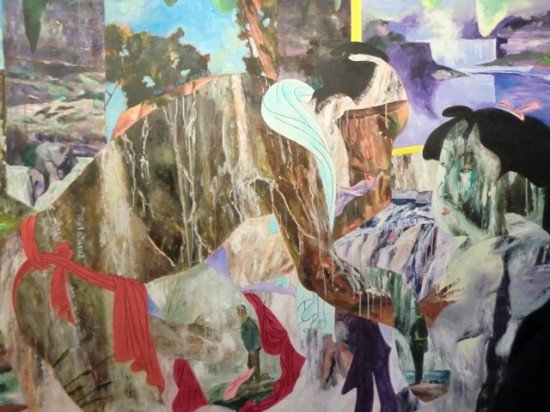 I suspect that one to be Universal Frantic Love 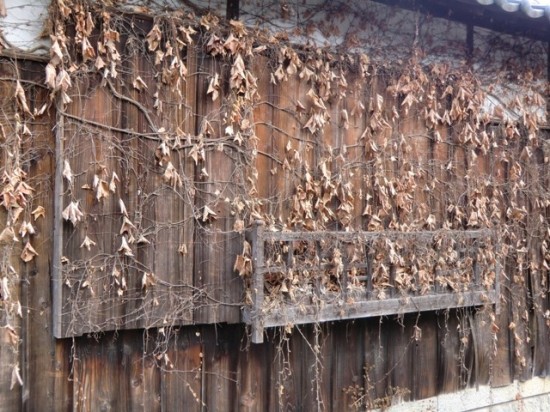 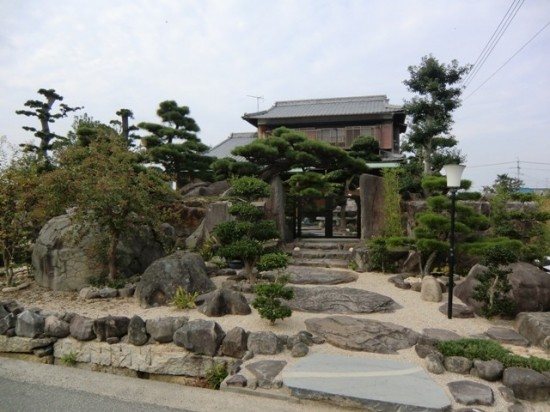 No, not every house on Teshima is old and more or less abandoned, far from it.

I also must mention artworks drawn in lead pencil by Susumu Kinoshita and that are a homage to Haru Kobayashi, one of the last of a long tradition of blind musicians in Japan. Those works were wonderful, but sadly, one cannot take pictures of them. 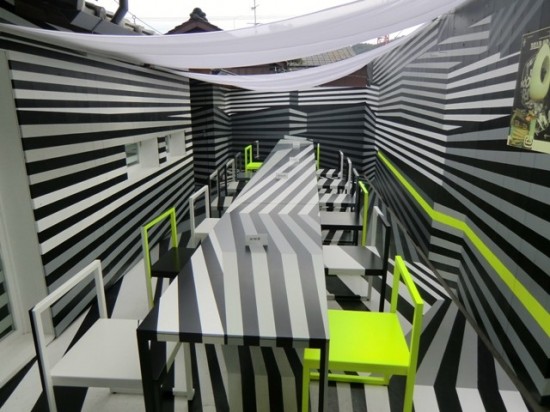 A psychedelic café that wouldn’t surprise anybody in Paris or Berlin but that feels a little out of place on Teshima. However, I must admit that when you’re inside it doesn’t hurt your eyes as much as it does when looking at pictures of it. 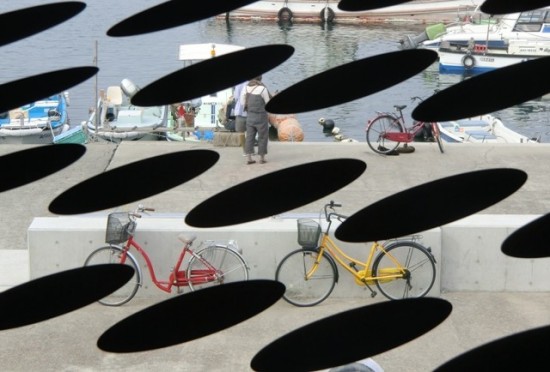 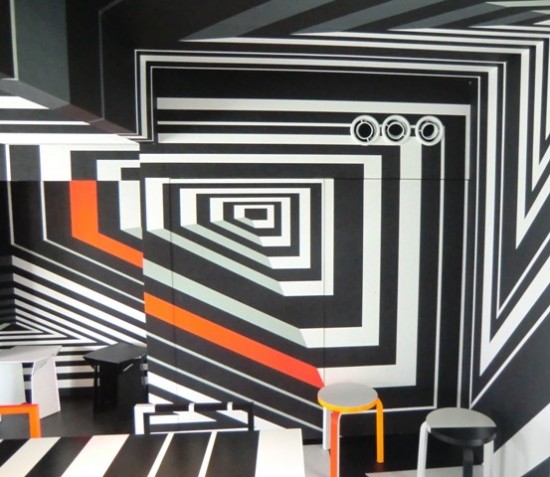 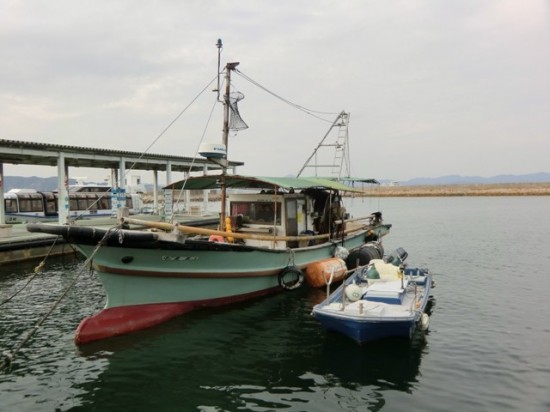 I wanted to get back to Takamatsu on one of those two boats, but it was supposedly impossible. A shame.

That’s it for Teshima (I mean, the overall tale of my visit, there are dozens of pictures left to show you, not mentioned a couple of anecdotes and stories), this island from which I didn’t really expect anything and that gave me so much. I can’t wait to return there.