Today, we’re back on Teshima after this small jump above Takamatsu, but we’re leaving Karato to the village of Kō on the southern part of the island to talk about Sea-Songs of the Subconscious, by Cameron Robbins a pretty unique work of art that was designed by one of the three Australian artists that had “invaded” the village during the Setouchi International Art Festival. 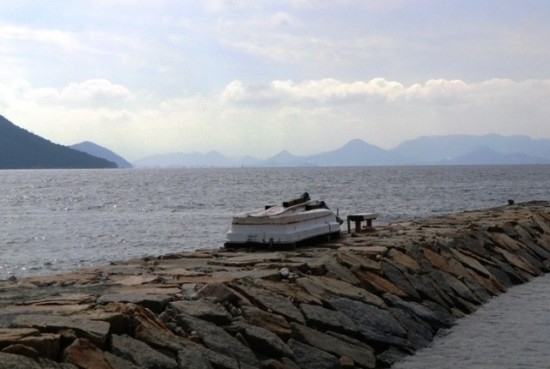 A pretty unique piece, because its appearance doesn’t matter, a quite unexpected thing when dealing with art. As you can see, it is simply an an upside down small boat with two PVC tubes on top of it!

However it is odd only if you reduce art to visual arts. This work of art is not such a thing, it is a musical piece of art! Yes, what we’ve got here is a music instrument, a pretty unique one indeed, as the musician is not human. It is the sea itself!

Parts of the tubes are in the water and they act like organ pipes; it is the moving water, tides and waves, that pushes the air through the pistons and that creates sounds. 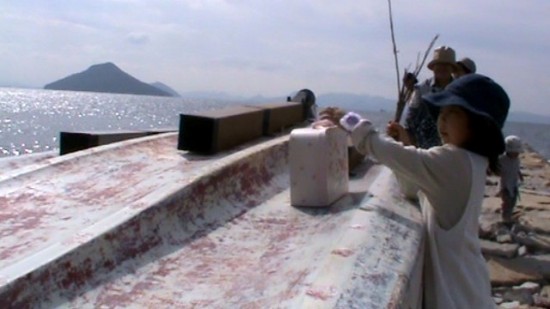 So sure, the music coming out of it won’t blow you away. However, when you stand next to this upside down boat and listen to those sounds, you do have the strange feeling that the sea is singing or talking to you, as if it tried to communicate with you, and soon enough, without really realizing it, you listen, trying to understand, trying to find a way to respond. Then you remember that even though the sea doesn’t have a mind, it is indeed alive in a certain way, and that it plays an utmost important part in the circle of life, especially in the Seto area. These “sea-songs” remind you all of this in a very beautiful way.

I will end with two short videos, because talking about sounds and music without allowing you to hear would be sad.

I shot the first one, and sadly the sound is not as good as I had hoped (damn wind!), but it will give you an idea of what the experience was. The second one was shot by Cameron Robbins himself.