Harmonica (ハーモニカ) is the third artwork made by an Australian artiste –Sue Pedley– in the village of Kō on Teshima.

At first, I have to admit that I feared for the worst when I read the description on the goude book. I even thought about skipping the visit to not waste time there.

It says somethibg like “It is an abandonned fisherman’s house covered with a fishing net” and that’s pretty much it.

In the end, the only reason we went was that it was located very near the bus stop and we didn’t want to offend the very sweet old lady who had been chatting with us since Karato and who made a point in telling us how to reach every single piece of art in Kō as it was her village and she was very proud of it becoming such a tourist destination for those three months.

Well, it pays to be nice as the piece of art ended up being very interesting, almost one of our favorite, although I can’t really explain why. 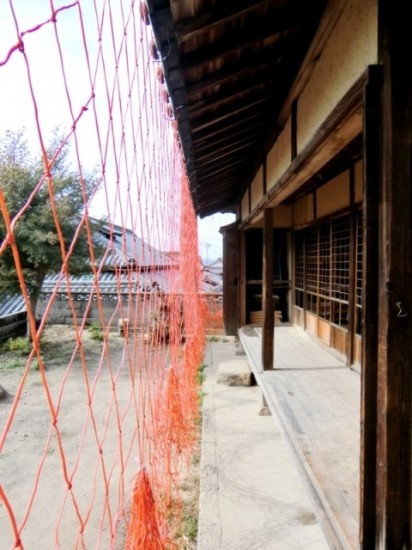 When we approached the house, all we could see was, you guessed it, an orange nylon fishing net covering it. It is once inside that we discovered what was actually going on with this house. It was was full of objects in apparent chaos, but something was telling us that chaos it was not, each object had a very predetermined location for a specific reason.

All of those objects were actually coming from many of the abandoned house in the village and they were recreating a world. The world of Teshima‘s fishermen of the past, the people that used to live in those houses. 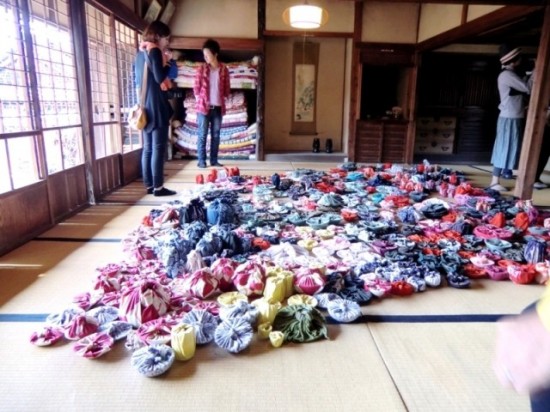 The central element of this installation was all of those dishes, packed in different pieces of cloth. A pretty random thing at first sight and once again nothing was random about it as that was actually a map of Teshima! The big stacks representing the hills and mountains, and each color representing a different things (forests, fields, towns, cherry tree parks, etc.) 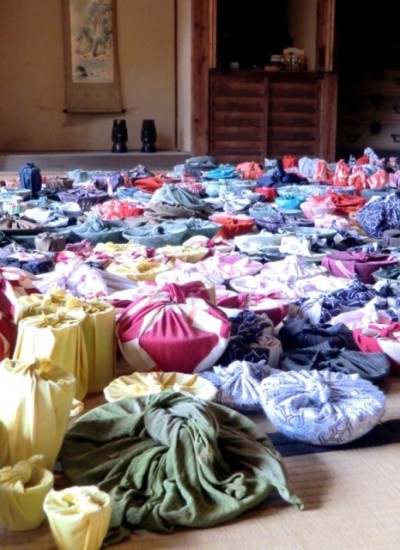 Spending time in this house, looking at the various items placed here and there, we slowly realized what a wonderful homage it was to the island and its people. All of those elements with no special history belonging to lives that are today gone, were used to recreate those lives and the island itself. It was very beautiful and quite moving too, underlining the absence of all of the people that don’t occupy the many abandoned houses of the island, either because they’re dead or because they moved to big cities for the younger ones. And ironically, it this homage was made possible it is also because they’re now gone.

I almost forgot: why Harmonica ? Because in the main room, there was a “harmonica-chest” which drawers (at least some of them) were making music sounding like a Harmonica.

(and writing this post I realize how few pictures I took, and that’s a shame really, especially because now, it is gone)