This post is a little different from the other Setouchi Triennale 2019 posts so far, as it doesn’t focus on one single day, but rather on one artist and his art. Namely, Xiang Yang and his amazing project on Shodoshima called:

Sure, it’s a long title, but the project is of the same scale. And it’s not even really one artwork, but rather five art projects, plus plans for a sixth one in the future (hopefully for the Setouchi Triennale 2022).

I had the chance to spend a couple of hours with Xiang Yang and his wife Ye Zi last July (this is why I was on Shodoshima in the previous post), and they had the opportunity to introduce the wonderful art Xiang Yang makes into more details, as well as show me what wonderful people they are. That morning was definitely one of the high points of the Triennale for me this year, and the festival wasn’t even in session on that day.

Despite the project being available in Kusakabe port since April (I already showed it to you then), they were back this summer to add a few elements, including a pretty major one, namely Oceanwalker which debuted during the summer session. Why don’t we start with it?

Most of Xiang Yang’s art is made of old discarded traditional Chinese furniture that the artist has gathered, and that he uses to recreate something new from it. All in all, the idea is similar to the one of recycling, but because these pieces of furniture have a history, an identity, a soul one could say, it’s more than just recycling. It’s about changing the functions of those objects while preserving their beauty, giving them a new life.

To understand Xiang Yang’s better, I warmly advise you to read the interview I made with him, roughly at the same time as this visit:

So, Oceanwalker is basically a boat, the hull being a traditional Chinese dragon boat, and the top coming from discarded furniture as previously mentioned. It is 27 meters long and quite impressive.

I had the privilege to climb on it, but visitors can’t do so during the Triennale for obvious safety reasons. So the following pictures are quite unique.

Next, we headed to the tower inside which we spent the most time chatting.

From the outside, Seven Layers of Seven just looks like a tower, made of discarded furniture. However, one can enter it (just make sure you take off your shoes), and once inside, you will discover that it is actually one of the most interesting rooms of the entire Triennale.

I didn’t take pictures on that day (we mostly spent the time talking), but I did when I first discovered the artwork last Spring (you can see them if you click here), and I took some more recently, during my third visit (coming on a blog post sooner or later). Just know that we were mid-July, it was one of the first really hot days of the summer (nearing 34 degrees if I remember correctly), but the breeze inside the tower kept the air cool in it, and we were also protected from the sun. Despite its unusual shape, I considered it to be the perfect summer office or reading/relaxing room.

Unfortunately, we couldn’t spend the entire day hanging out in the tower, so we moved on to the next installation:

The Shore Where We Can Reach

The Shore Where We Can Reach dates from 2015 and has traveled quite a bit (China and Germany) before coming to the Setouchi area.

The main structure is comprised of two boats, coming from Xiang’s home area, that are linked to various pieces of furniture and other wooden elements in order to create a new unique structure, at the same time a boat, but also some sort of playground, a relaxing space. And know that it’s also possible to sleep in it (you just need to contact Koebi-tai beforehand if you want to do so). 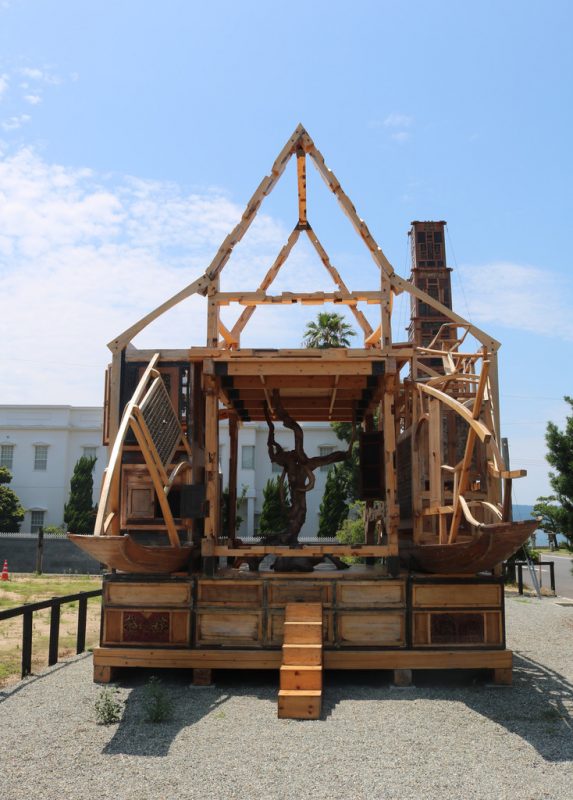 This is not all there is to see. The three large installations are located next to two historical buildings (that also housed artworks in 2016). In the first one (the Tengawa house), there is a small exhibit composed of videos, drawings, models of both past projects (showing among other things how the three installations above were built) as well as future projects, including a massive houseboat that would incorporate Oceanwalker and The Shore Where We Can Reach!

In the other house (the Fukui house), a smaller scale project but full of poetry and emotions that Xiang Yang was finishing:

Using old (and not so old) pictures, the artist carved silhouettes in the walls. These silhouettes are of scenes taking place on Shodoshima, some from the olden days, some others from a few weeks or months prior. Nowadays, the inner walls of the Fukui house are all white, but the different layers of paint they received over the years allowed for those carvings to reveal the former appearances of the house. Despite being very different in appearance from the previous projects, the idea remains similar; to turn the old into something new. To make it useful, interesting and relevant again.

Note how the dust from the carving is kept in small bags, as a way to keep it being a part of the artwork.

Finally, the last project is called:

When building Oceanwalker, Xiang Yang had quite a few leftovers, and he didn’t want to discard them again, as the idea of the whole project is to make all those old items important and useful again. So he turned them into small stools. And because Xiang Yang’s art is not only about connecting the past with the present, but also connecting people with each other, he decided to give those Traveling Stools away. And he kindly gave one to me! One of the best presents I received in quite a while.
With the stool came a very beautiful document making the “adoption” of the stool official:

So, my stool is number 67 and I love it very much.

I made good use of it almost as soon as I waved Xiang Yang and Ye Zi (and their assistant whose name I can’t remember, I’m very sorry about that), as I sat on it when I had lunch at Umaki Camp (I alluded to it in the previous post). 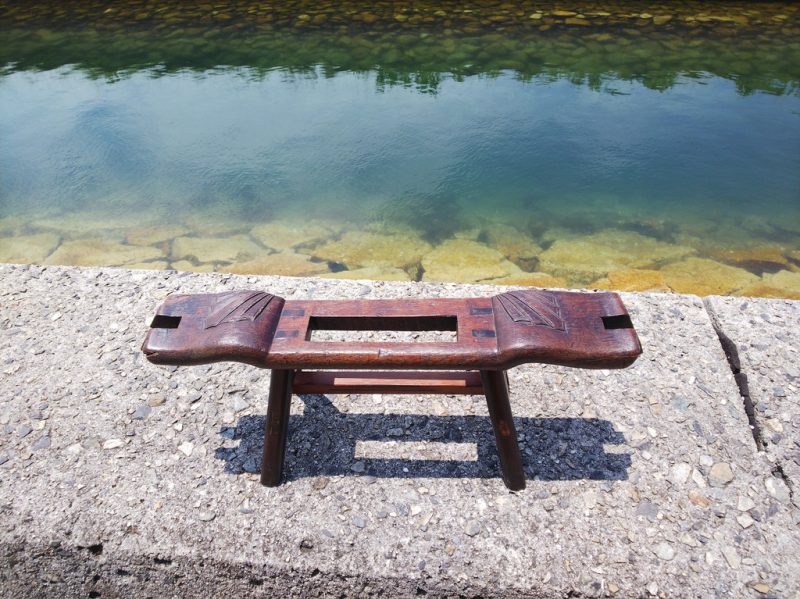 Since then, I’ve set it in a place of choice in my office, but I can’t wait to bring it along to a future trip.

I guess that’s all for today, and once again, thank you so much Xiang Yang and Ye Zi for this wonderful morning spent with you. Your art and kindness touched my art deeply. I really hope our paths meet again as soon as possible (hopefully in November).

In the meantime, if you’ve missed the previous episodes of my Setouchi Triennale 2019 reports, you can find the list here: