We were on May 12th, the Spring session of the Setouchi Triennale 2019 had just started its second half, and the end was in the distance already. Time to finally go to Megijima.

It’s no secret that Megijima is far from being my favorite island of the area for a bunch of reasons. Almost none is related to the Setouchi Triennale, although it rarely had amazing art in the past. However, things have started to change in 2016 and I was quite curious to see what the island had to offer in 2019.

So, why don’t we go and find out together?

Right off the boat, we went to a work of art that is a bit far from the rest. I knew it location, if only because I had a glimpse of it a few weeks earlier as it was under construction, but also because it was the site of one of the three Oni Houses by Chaos Lounge three years ago. It has its importance because the artist Kouryou (she romanizes her name this way, but remember that in Japanese, in that case, ‘ou‘ is not the sound that you find in ‘cloud‘, but it is a long ‘o‘, so the name is pronounced something along the lines of Kohryoh) has worked with Chaos Lounge in the past, she may or may not have been a member of the collective. In any case, while the artwork Ebune – Drifters is intriguing from the outside, as soon as you enter, you’ll recognize a style very similar to Chaos Lounge’s:

I’m sure this House Boat (this is what Ebune means in Japanese) inspires many different things to many different people. I don’t think many people will leave it feeling indifferent. Personally, while it’s obviously not a “pleasant” place, I really liked it. You cannot not imagine a story when you’re visiting the house. Personally, I couldn’t help but feel that while this house used to be occupied by humans at some point, after running aground on Megijima, it was overtaken by Oni at some point (before or after humans left, that is the question). They adapted the house to their own convenance before abandoning it too.

In any case, while I fully understand why you wouldn’t like such a piece, you’ll have to recognize that the quantity of work put into it and the attention to details is quite amazing.

One of the veteran artworks of the Setouchi Triennale on Megijima was Equipoise by Harumi Yukutake. I was quite surprised that it wasn’t listed for this year when the first list was published. I assumed that it may have been a mistake. Intrigued, I went to check it out last November during a trip to the island, and while the artwork was still there and was still fine, the house inside which it was located wasn’t so fine (if I could see the artwork despite the house being closed, it was because of the holes in the walls). Well, this is what the place looked like last May:

It’s gone! Not only the artwork but the house too!

Moving on, we went to Megi House.

Why this red cone in the middle? No idea. It’s not a “real” cone, it’s art somehow.

Remember, Megi House is mostly Aichi Prefectural University Arts and Music‘s own concert hall in Setouchi, but when they don’t have live music, there are some exhibits too. That red cone (don’t ask…) but also some very interesting papier mâché (I think) animals:

Our next stop was another veteran artwork that has been around since 2010, one that I see quite often, although, it’s usually from Meon heading to Ogijima. That is 20th Century Recall by Hagetaka Funjo:

It got taken over by my kids who wanted to play some music.

(note: the pictures may seem to indicate otherwise, but my children didn’t push the other boy away. They waited for him to be finished before taking his seat)

A new work of art near the beach? What is this?

Answer: it’s part of Eros Nakazato’s work that will be detailed in a few paragraphs.

At the same spot as last year, Bonsai Master Masashi Hirao and local designers Setouchi Cogeiz are back for the follow-up of their project from 2016: Bonsai – Deepening Roots. Apparently, they’re here to stay, and that’s good news. Although three years ago, I kinda hoped the place became a permanent feature of Megijima, it didn’t, but if it returns every three years, that’s better than nothing, right?

The concept is the same: a renovated house (renovated twice, as they tore it down three years ago at the end of the festival, and re-renovated it this year) and lots of amazing bonsai (and like three years ago, the bonsai change from season to season).

I realize that for some reason, I mostly took pictures of the garden and not so much from the inside of the building. Maybe that’s because it was a bit crowded that day. More to come soon hopefully.

Afterward, Leandro Erlich’s Presence of the Absence was visited, however, I will never show you this artwork (two pieces actually), first because pictures are not allowed, but also because it’s better to not know what to expect when you visit. Also, this year, Eat & Art Taro has set up his restaurant and his Setouchi Gastronomy project in Restaurant Iara (the restaurant sharing the same building as Presence of the Absence), but I haven’t had the chance to taste it yet.

If you want to know more about it, may I advise you to read the following article (included a guided visit by the artist himself):

Is that me or are there fewer plants? Or maybe they cut a tree or something. Not sure.

And between Mecon and the beach awaited us our final stop of the day, but it’s a big one. Indeed, this year, Megijima inaugurated the Little Shops on the Island, a series of eight artworks and projects in the same building, most of them being actual shops.

First, there is something a bit odd for me going to this place. See, the Little Shops on the Island occupy a former guesthouse/beach-house, and I happen to know quite well the daughter of the former owner. When I arrived in Japan, almost eight years ago, the place was open. It was owned and managed by the mother of one of my students at the junior high school / high school where I used to teach a couple of hours a day. That student had a strong personality, she was not a “good” student, but for some reason, she probably became my favorite student there. She always used to tell me about her mom’s business on Megijima and invited me there. I only went once, not being a big fan of Megijima’s “beach culture.” However, I had planned to visit her the following summer, especially because she wasn’t my student anymore and I wanted to catch up with her, but that summer the place was closed. The following summer too, and the one after, too.

As I had lost touch with her at that point (last time I heard about her, she was in college in Kyushu, she must be in fourth year now), I never learned why the place was closed, and I still don’t know. What I know is that now, it’s part of the Setouchi Triennale in the form of this mini “shopping mall.

Let’s start with Ping-Pong Sea by Rintaro Hara and Yu Hara (I think they’re a couple) as it occupies most of the first floor. It’s basically some ping pong tables that you can use (you can rent both rackets and ball for 100 yen each). Except that they’re very special ping pong tables (I won’t spoil the surprises), especially the center-piece, a table for seven players who can play at the same time!

Next, you have Eros Nakazato‘s un… Salon for soothing your soul, which is mostly a very special chair.

You also can use it. Just sit down, turn the crank and see what happens.

I’ll give you a few hints in the form of close-ups:

An artwork that should please Steampunk fans, but not just them.

In the room next door, a strange exhibit comprised mostly of a movie:

It’s How beautiful the world could be by Mai Yamashita & Naoto Kobayashi.

At first, it doesn’t look like much; just someone riding a bike with some text on the wheels. Then, you realize how the film is shot and it’s amazing in itself. Also, there is a tiny bookstore or library that I didn’t pay enough attention to (because it’s all in Japanese), but apparently there is a lot of meaning associated to it, the title of the work being the “key” to understand it. I need to revisit it so that I can tell you more about it.

I love Leandro Erlich‘s works, all the ones I know. However, this Laundry… What went through his mind exactly?

I didn’t stop at the Shooting Gallery by Jin Hasegawa. The reason is very basic: it wasn’t free (there are takoyaki and a few more things involved) and the kids would want to do and try everything, so we swiftly attracted their attention elsewhere once they were done playing ping-pong. I’ll return without them.

The last “shop” of this part of the building is the Wedding Shop by Leong Ka Tai and the Red Thread. I’m not completely sure what this was all about. Well, at least the first part. A table, some accessories and a sign that says:

There was a young woman there, but we didn’t speak. I guess they’re “marrying” people… the Chinese Way… It didn’t happen while I was there. Another work that needs to be revisited.

However, upstairs, it’s more straightforward, it’s a photo exhibit by Leong Ka Tai (he’s a photographer) about married couples from Megijima and Ogijima. A very beautiful and touching exhibit, with an explanation by the artist (and a few surprises too):

Another surprise (not really, I knew about this one): My friends Kazumasa Hashimoto (from Team Ogi and Onba Factory) and Miki Hashimoto-Saito, who actually helped with setting up the exhibit.

There were many more, I just shot a few to give you an idea.

At the front of the building where the beach house used to stand, there are now two “little shops”.

One is Hair Salon Kotobuki by Aiko Miyanaga. It’s a real hair salon and you can’t visit it, only go get a haircut.

The second one is Véronique Joumard‘s Café de la Plage (“Beach Café” a very common name of many cafés near the beach all over France).

However, there is a twist, as my kids are showing you:

The paint used all over the café is light and/or heat-sensitive. And because of this, strange things tend to happen:

We were about to leave when suddenly… The Hashimotos!

So, there was no other way, this had to happen:

Next step: print this picture, and take a picture of them holding it.

After this last funny encounter, it was time to return home.

If you haven’t read my previous reports of the Setouchi Triennale 2019, they’re all here: 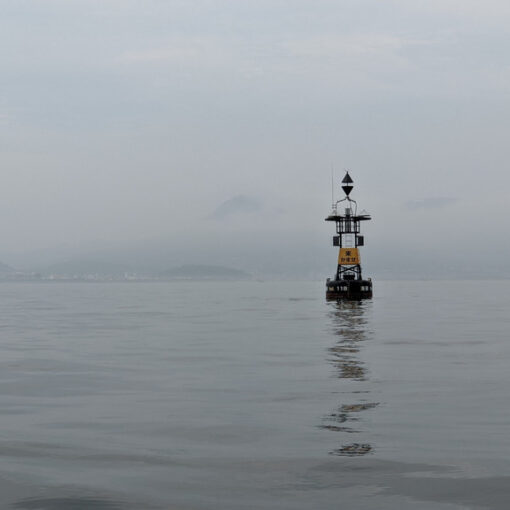 So, long story short, on Sunday morning, the whole family ended up on a small motorboat  and got a free mini-trip off […] 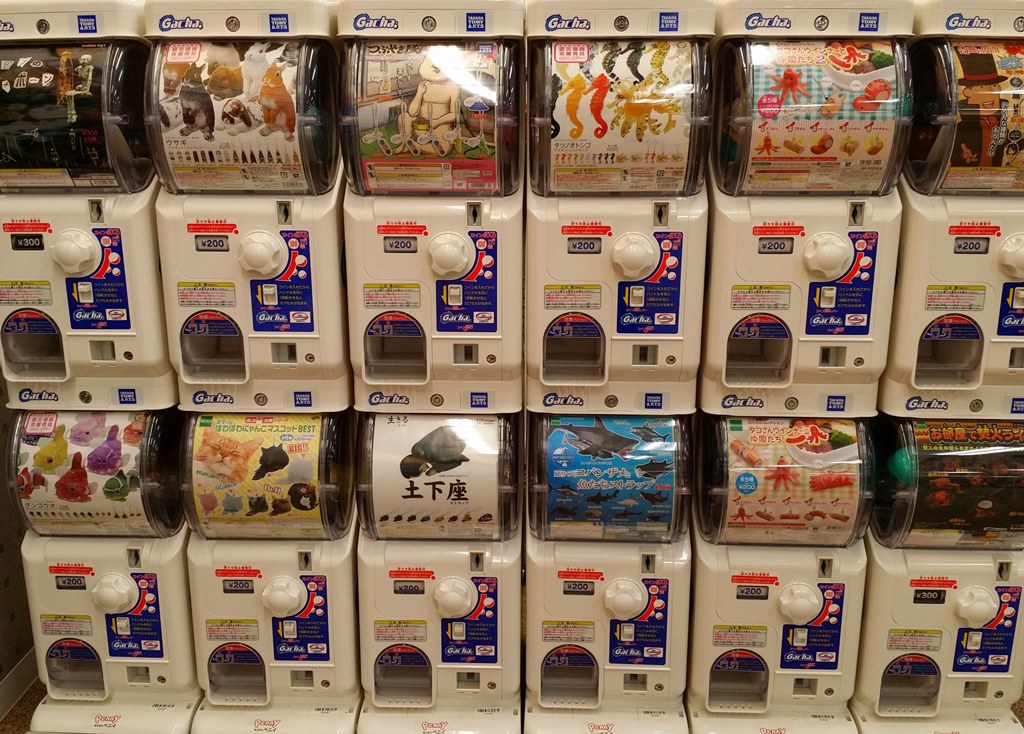 I know, this blog doesn’t talk enough about Japan’s weird and bizarre things. My friends who don’t live in Japan complain enough […] 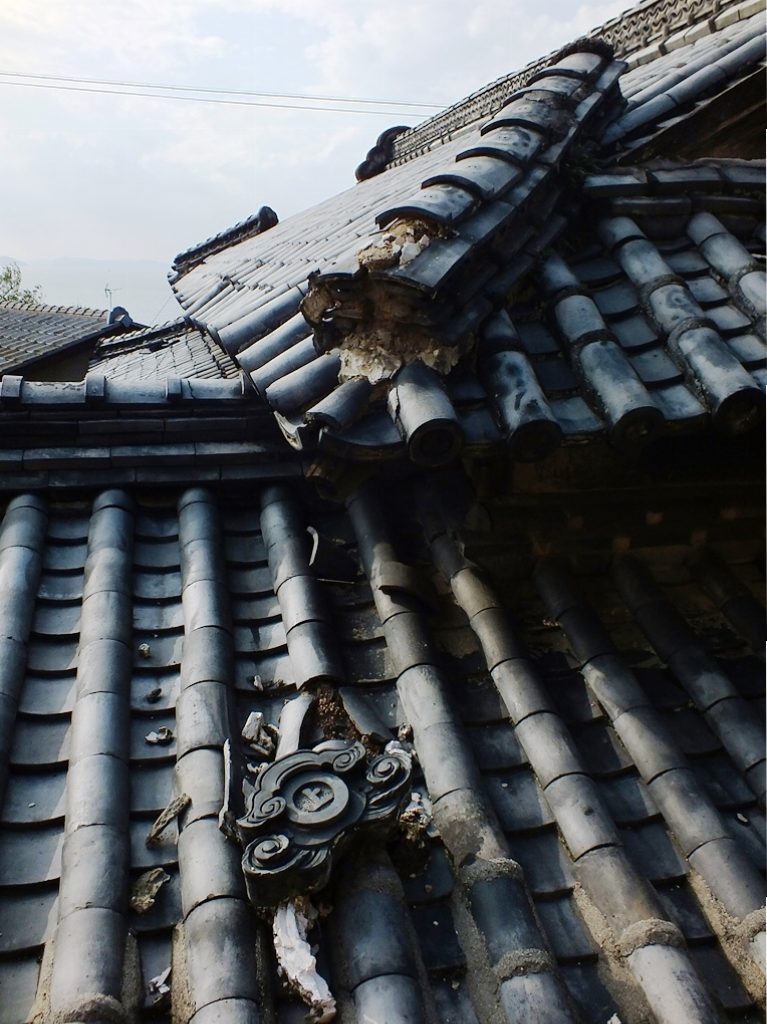 This is the roof of one of the abandoned traditional houses on Ogijima. It’s been like this since last summer […] 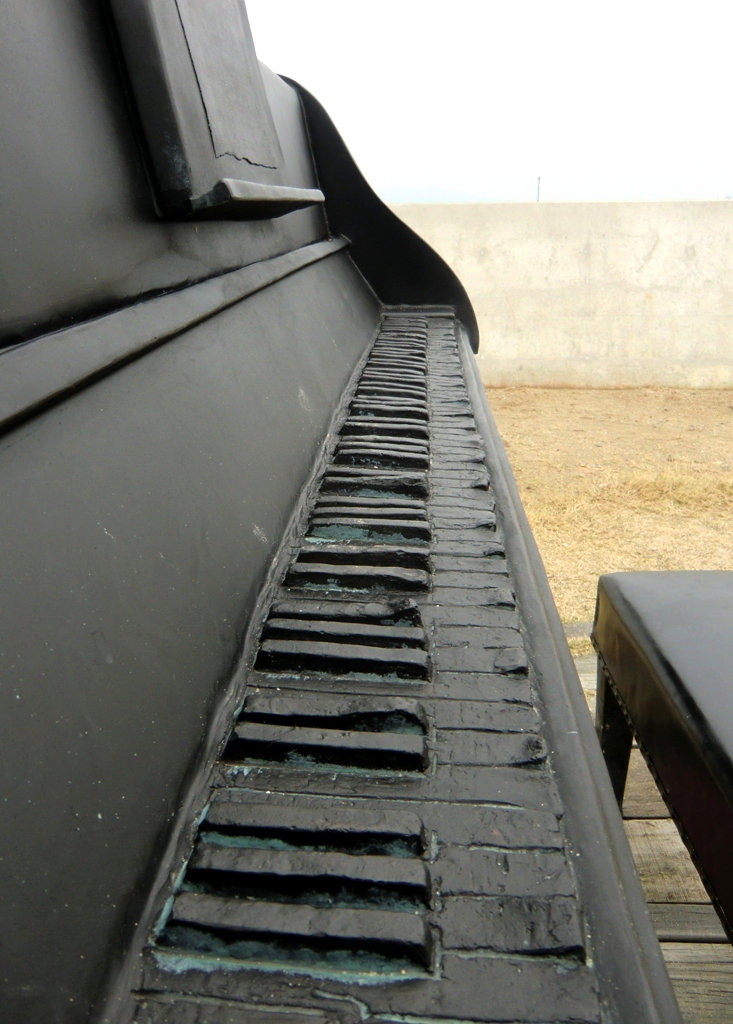