Today, Yoichiro Yoda will tell us about his project, Island Theatre Megi, on Megijima.

You may have gotten a glimpse of the place in my post dedicated to the new art of Megijima this year, but you’ll get much more today. I got to meet Yoichiro Yoda three weeks ago, as he was spending the month in town. So, in addition of the usual interview, we’re getting a few goodies, especially a guided visit of the place by Yoichiro himself. 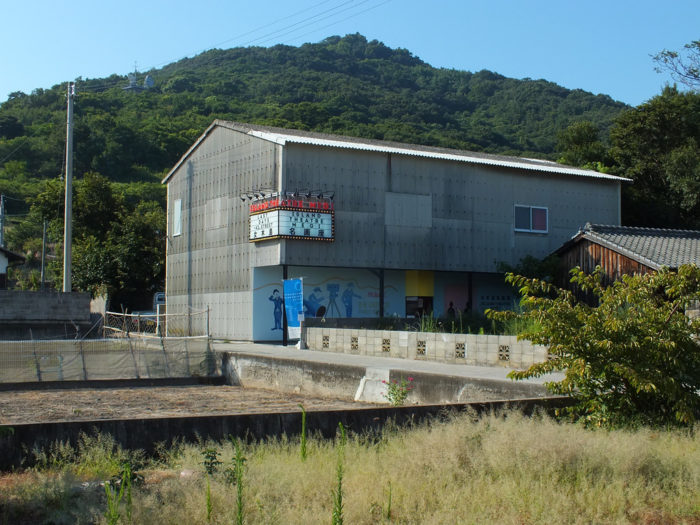 Can you tell us a little bit about yourself?

My name is Yoichiro Yoda.
I was born in Kagawa, Japan in 1972.
When I was 3 months old, I moved to New York City with my parents. I grew up on 53rd Street & 3rd Avenue in Midtown Manhattan, and Park Slope, Brooklyn.
I graduated from Fiorello H. LaGuardia High School of Music and Art, then I graduated from Tyler School of Art in Philadelphia.
Then I went to Queens College where I received my MFA degree. 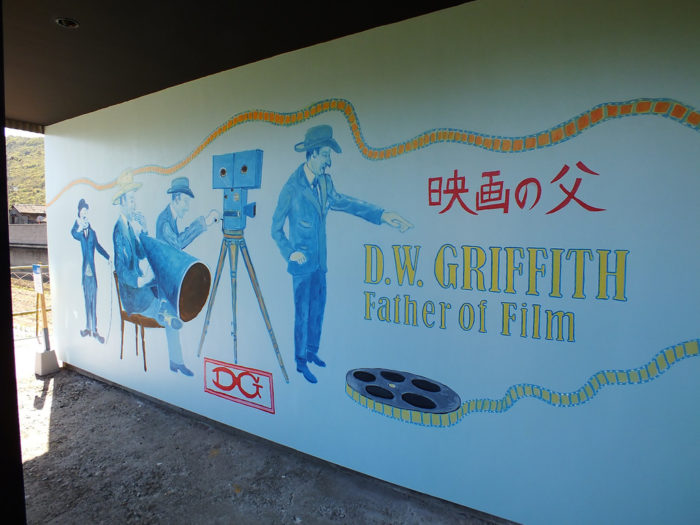 What made you want to take part in the Setouchi Triennale?

When I first heard about the Setouchi Triennale, my first thought was, “Wow! This is my chance to do my 42nd Street Theatre project”.
It had been my dream since my college days to create a movie theatre based on 42nd Street movie theatres that were sadly demolished in the mid to late 1990’s. For me , it would be a chance to reclaim what was lost and recreate them in the completely different atmosphere of the Seto Inland Sea. 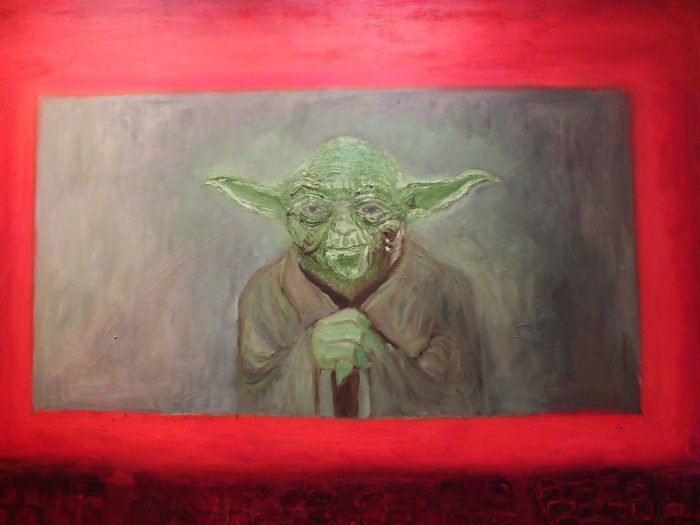 My project is called “Island Theatre Megi“. It was to transform an existing warehouse on Megi Island into a movie theatre based on several different 42nd Street movie theatres that are now lost.
I worked with a great architect named Koji Umeoka and for about a year, we worked out several different plans and drawings.
After the warehouse was converted into a two-level space, I flew over to Takamatsu and for two months I worked on painting murals and hanging paintings. I was helped immensely by so many wonderful workers, electricians, carpenters, video technicians, and the Koebi-Tai.
Day by day, the project became closer to reality.
I bought 25 vintage theatre seats from the Historic Hemet Theatre, located near Los Angeles, California, and they were installed in the balcony area.
The lobby includes walls painted with signs of old 42nd Street and Times Square businesses. Hanging on the walls are 40 oil paintings of various movie stars based on old bromide photos. 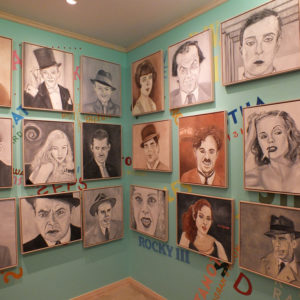 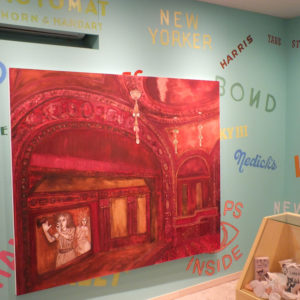 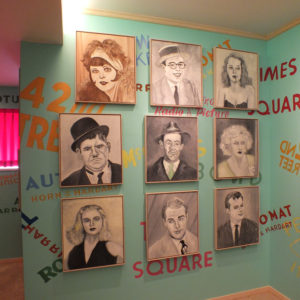 The theatre opened on March 20, 2016 with a screening of my documentary video, “Last Days of 42nd Street”, and Felix the Cat and Charlie Chaplin silent film shorts.
My documentary video, “Last Days of 42nd Street” took 9 years to make. From 1994-2003, I documented the beautiful, haunting, and shuttered theatres of 42nd Street. The theatres were taken over by the city and state,
In the beginning I would sneak inside some of the theatres. Hoewever, after calling everyday , the city’s Urban Developement Corporation finally granted me permission to see the interiors of several theatres.
I was also there on 42nd Street between 7th & 8th Avenues everyday during the sad demolition of most of the old theatres and historic businesses that made 42nd Street great.

I feel very proud that I was able to bring back the old 42nd Street to Megi Island.
I hope many people can enjoy the old movie theatre experience when they come to the Setouchi Triennale. 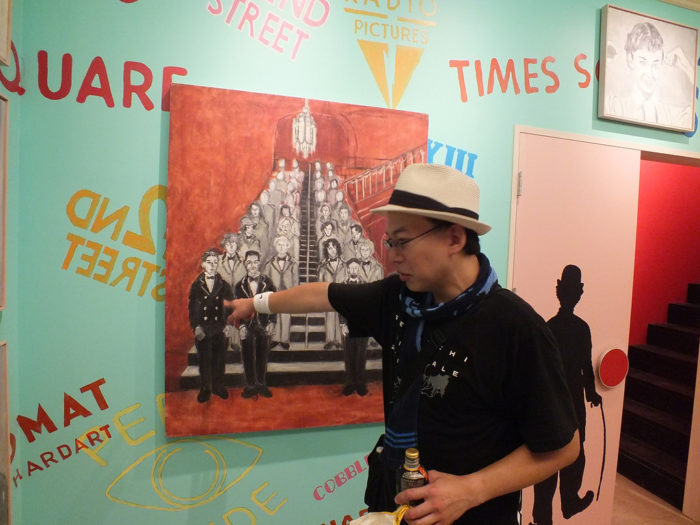 Yoichiro showing us the painting of people he worked with in the past and who are now theater managers. 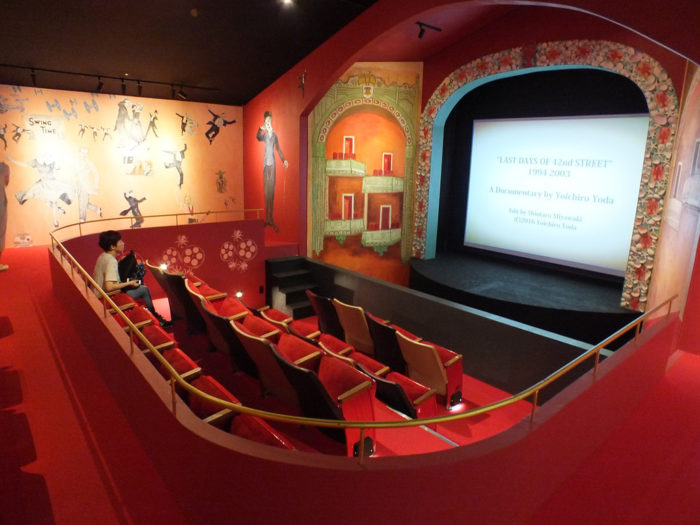 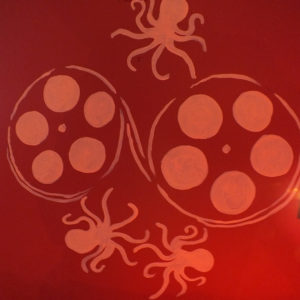 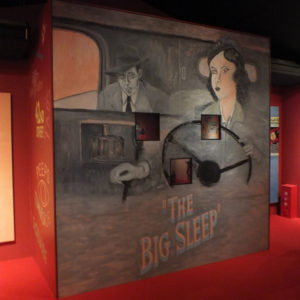 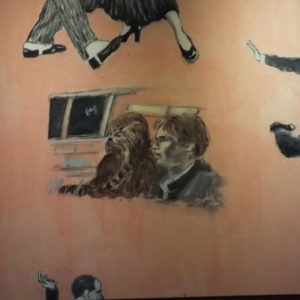 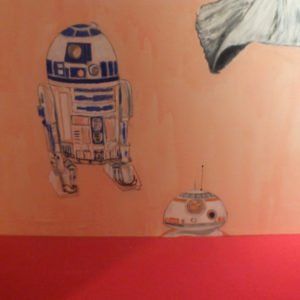 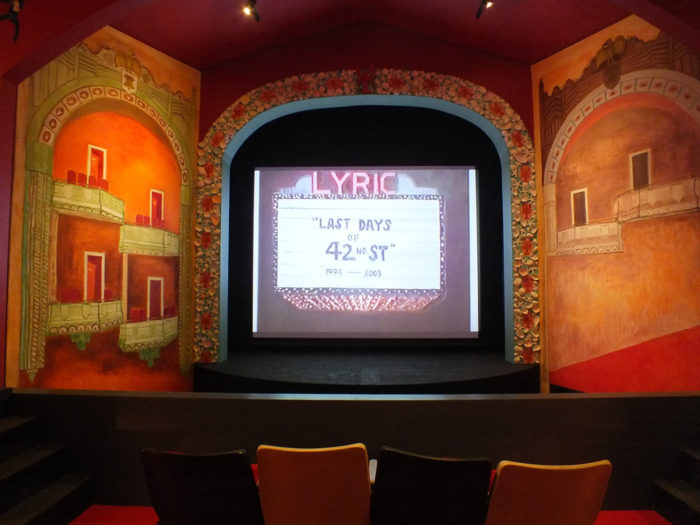 A picture of a projection of a painting… Mmmmm….

The best way to give you an idea of what Island Theatre Megi look like is probably to let Yoichiro show us.

(Did you notice how the whole video is just one long take? I’m just practicing my directing skills. 😉 ) 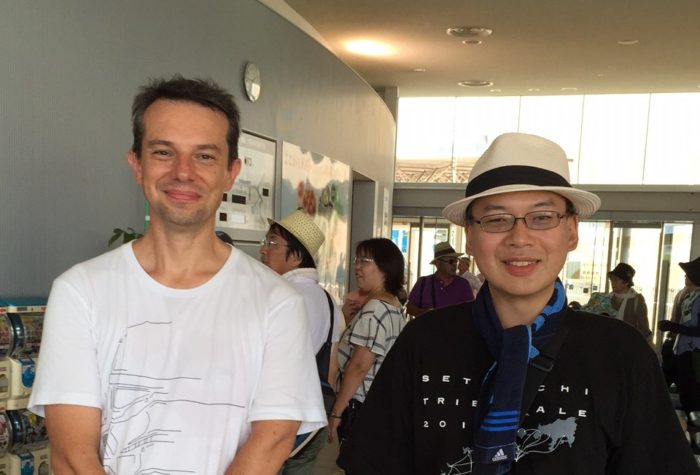 2 thoughts on “Island Theatre Megi by Yoichiro Yoda on Megijima”