And here we go! The Setouchi Triennale 2013‘s summer session is underway. It will be going on until september 1st and is filled with various events. On top of a few new artworks here and here and a new island hosting the Triennale for the first time (Ibukijima, where I’ll be tomorrow if all goes well) it’s usually in Summer that most of the events (concerts, theater, and so on) take place.

Yesterday, for the opening, various ceremonies and events took place pretty much on all of the sites. I spent the afternoon on Ogijima and the evening in Takamatsu Sunport, I’ll detail this very interesting (and hot) day over three posts, here is the first one, dealing wit the first part of the day on Ogijima. 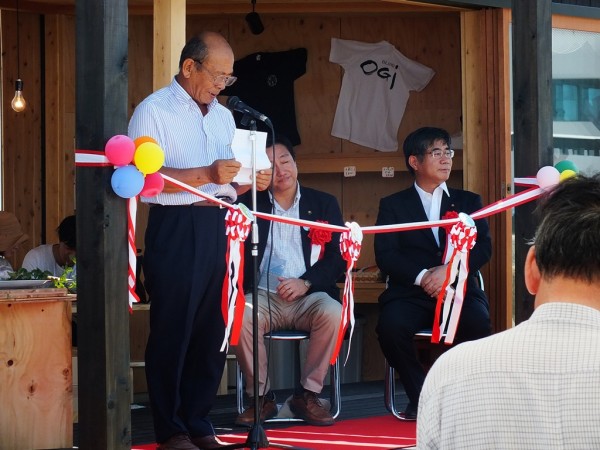 It all started with a quite official inauguration of Ogijima’s latest public building: Ogijima Table. It is located in Ogichō’s port, and it will serve several purposes. First of all, it will be a visitor’s center. One can think that it is a bit redundant with Ogijima’s Soul that also serves that purpose. Not wrong, but Ogijima’s Soul, despite its beauty, is not the best place where to spend time in summer, it can get very hot inside. On the other side, Ogijima Table is pretty much an open space with a roof (although it seems that it can be closed), I suspect that it’s not a very convenient place in winter. As such, both complement each other quite well. Also, it’s a nice rest area providing shade in a part of the island that sees the most people but doesn’t really have any protection from the sun. Finally, one will be able to buy fish there, very fresh fish as it’ll be still alive and having been caught a few hours earlier as the small fish pool where one can buy fish on the port has been incorporated into the building. I’ll show you Ogijima Table in more details one of those days when it’ll be less crowded). 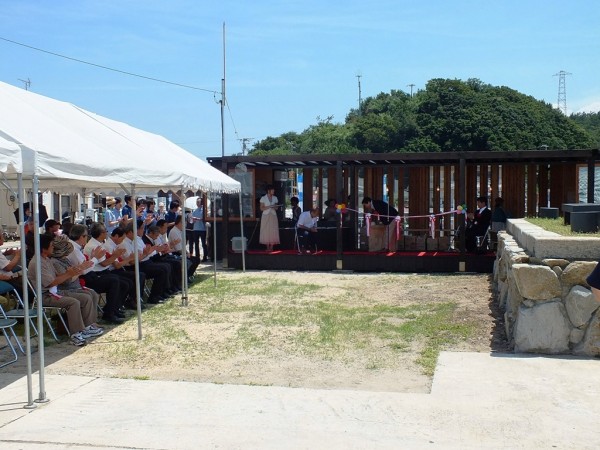 At the end of the speech, the ribbon cutting and other officialities, it was time for the mochi giveaway: 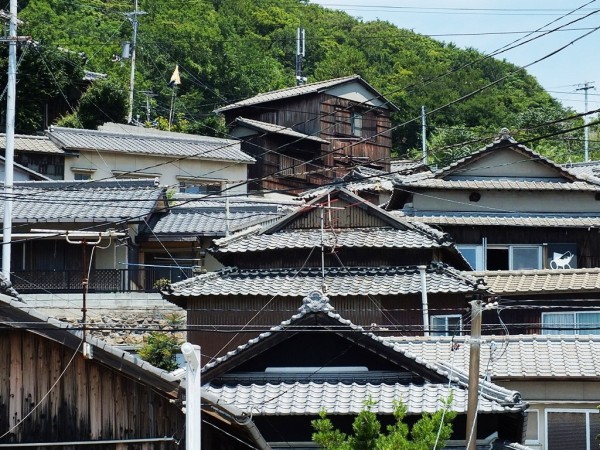 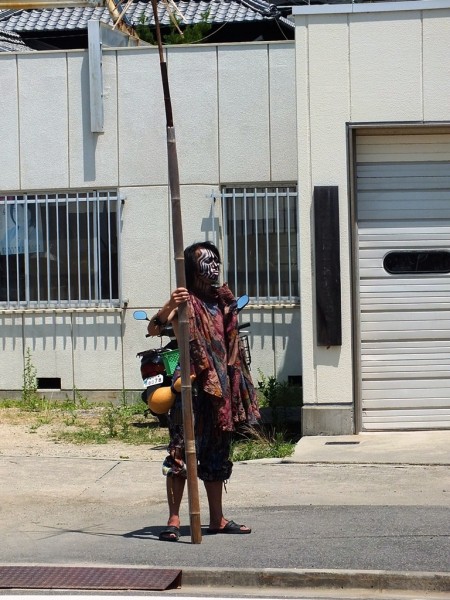 A quite peculiar individual. At first I thought he was part of the opening festivities, but he wasn’t. Was he some sort of odd cosplayer? No idea. We ran into him again later in the day, he was with a friend and they were throwing water in the street (in old Japanese style to cool them down). Still no idea why the attire. 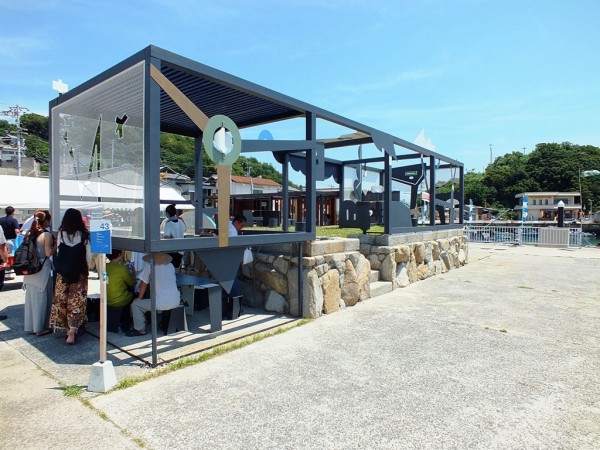 The opening festivities then ended by the Team OGI fleet recreating the fishing fleet coming back with a big haul, in a very festive way: 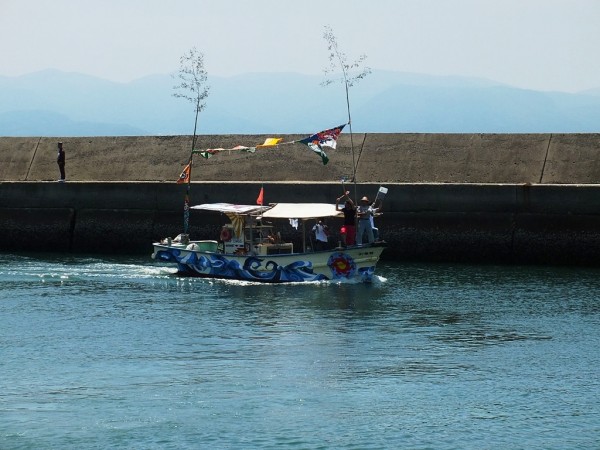 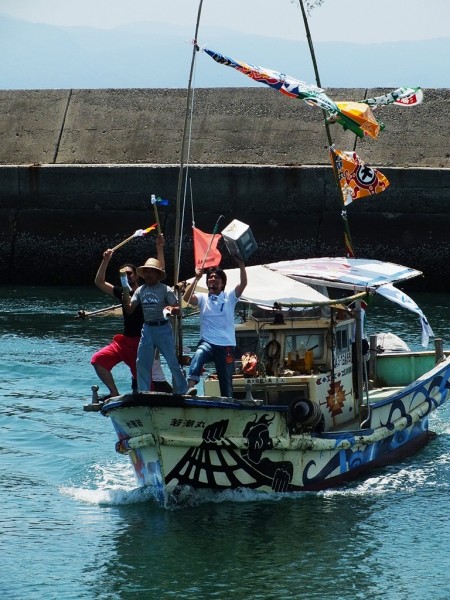 There was a special guest, namely artist Takashi Nishibori (pink shorts) who has strong ties with Ogijima as he made Uchiwa Bone House three years ago and Corridor of Time this year. He’s also currently making Weaving Weaving in Takamatsu Sunport. More details soon. 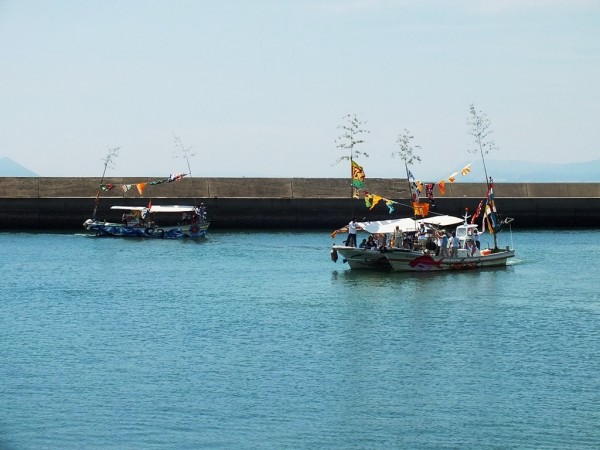 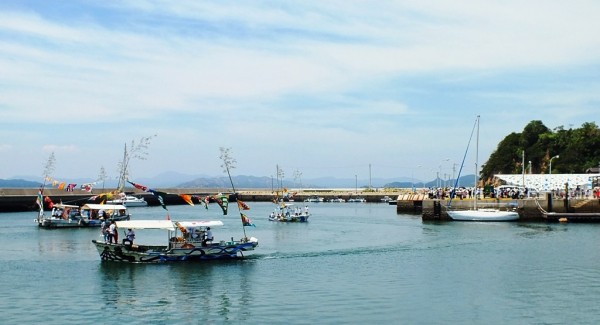 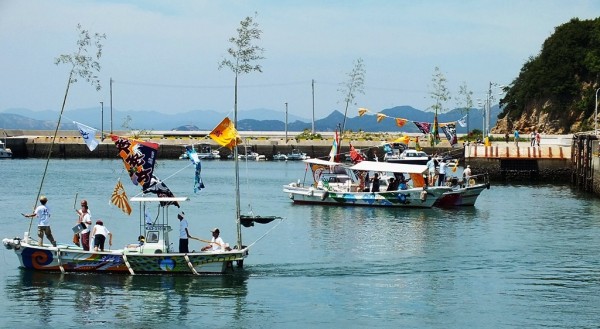 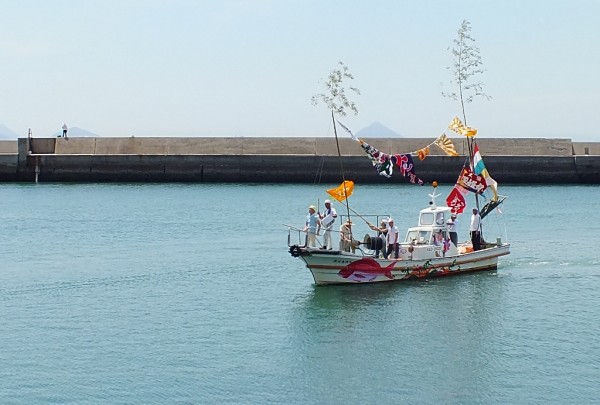 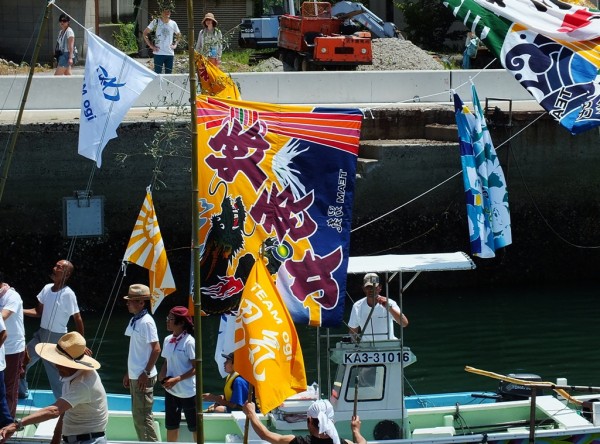 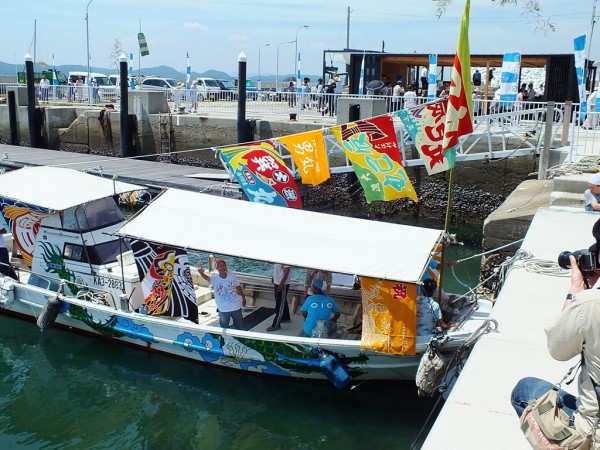 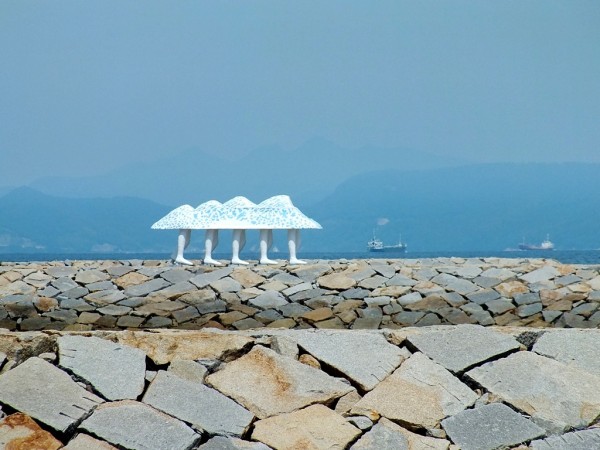 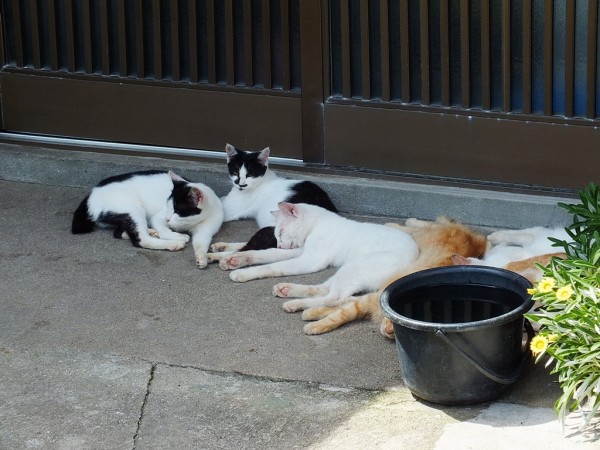 Pretty much the best thing to do with that heat. 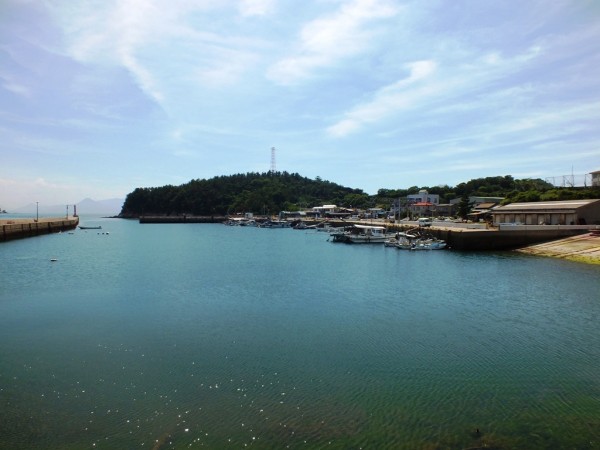 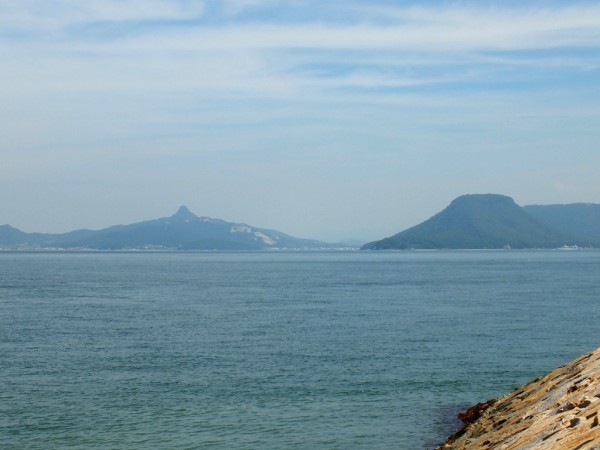 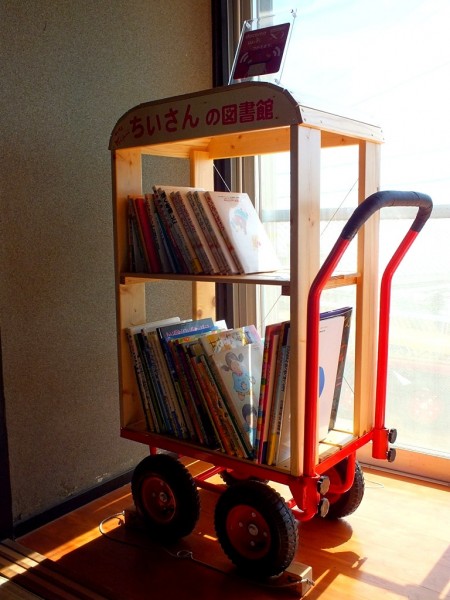 Onba Café and Onba Factory, the best places to be. 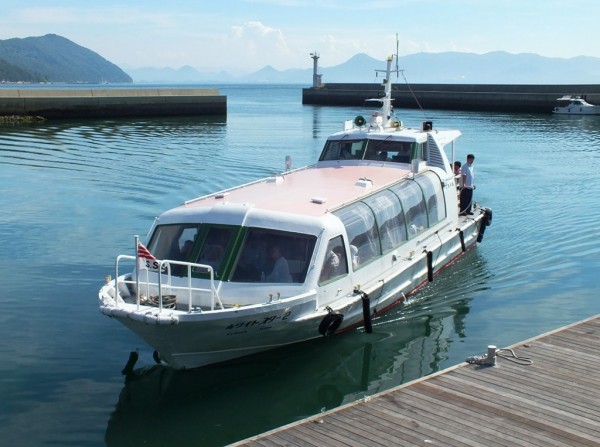 I recently mentioned a special boat that connects Ogijima to Teshima and Naoshima once a day. Here it is. Onboard was the Bangladeshi delegation visiting the various islands.

Shortly before it was time to leave, we heard a helicopter coming our way and to our surprise, we heard it land somewhere in the port (we were in the middle of the village at that moment). When we finally reached the port, we were surprised to see this: 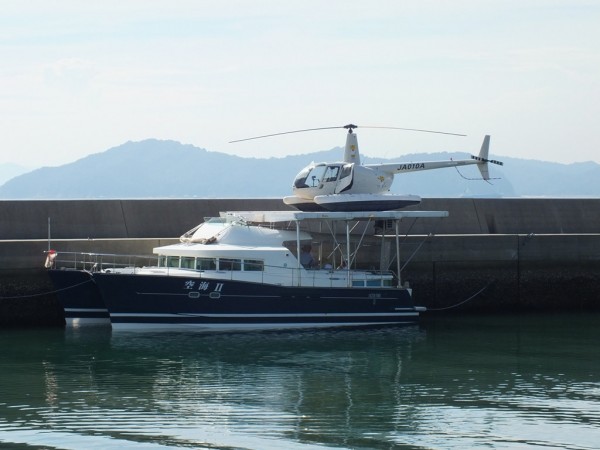 I suspect that either Soichiro Fukutake or Fram Kitagawa (the two heads of the Triennale) may have been onboard. Probably Fukutake as I saw Fram Kitagawa later in Takamatsu (on the other hand, while the helicopter flew north (to Naoshima? to Okayama?) the boat went to Takamatsu, so who knows?

And we’re ending this post with this wonderful garden somewhere on the island (behind Kawashima and Dream Friends gallery). It’s a private garden, but if I understood correctly, visitors are welcome to enjoy it (although you may want to double check, maybe I didn’t understand correctly. 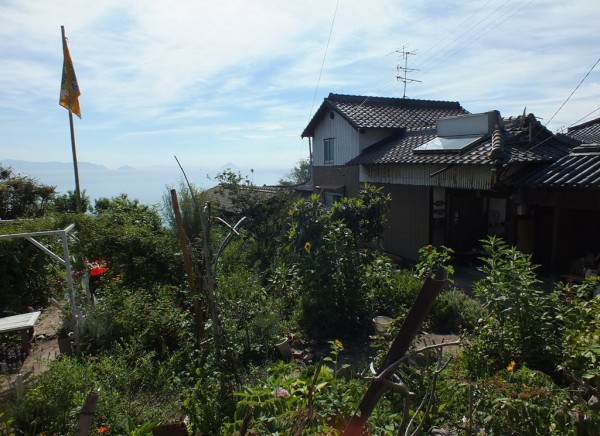 That’s it for the opening of the summer session of the Setouchi Triennale on Ogijima. Stay tuned to see what’s in Takamatsu Sunport.