Let’s continue our visit of the Onba Factory (オンバ・ファクトリー) with this second post. Of course, if you haven’t done so already, I warmly advise you to read the first post devoted to the topic and to watch the video of my interview with Yoshifumi Ōshima, Onba Factory‘s boss.

That’s it? Did you catch up? Good… Let’s continue then… 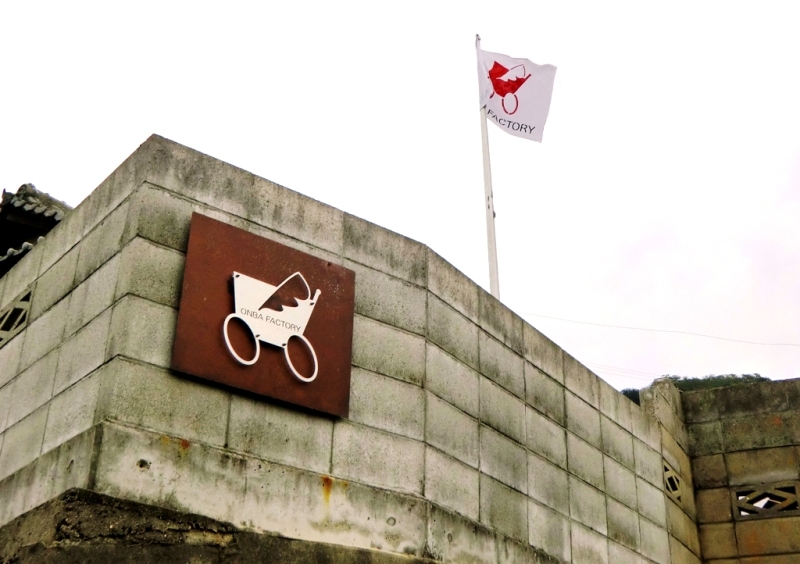 As you may already know it if you are a regular reader of this blog, it’s easy to get lost in Ogi-chō (after three visits to the island, I’m only starting to find my way around it, when usually those things come very easily to me). However, it is very “easy” to find the Onba Factory: there’s a plaque on its wall, and a flag that you can see form afar. Moreover, when the flag is raised, it means that the Factory is open, so if you see the mast without a flag, no need to spend hours getting lost in the maze that Ogi-chō is trying to reach it. 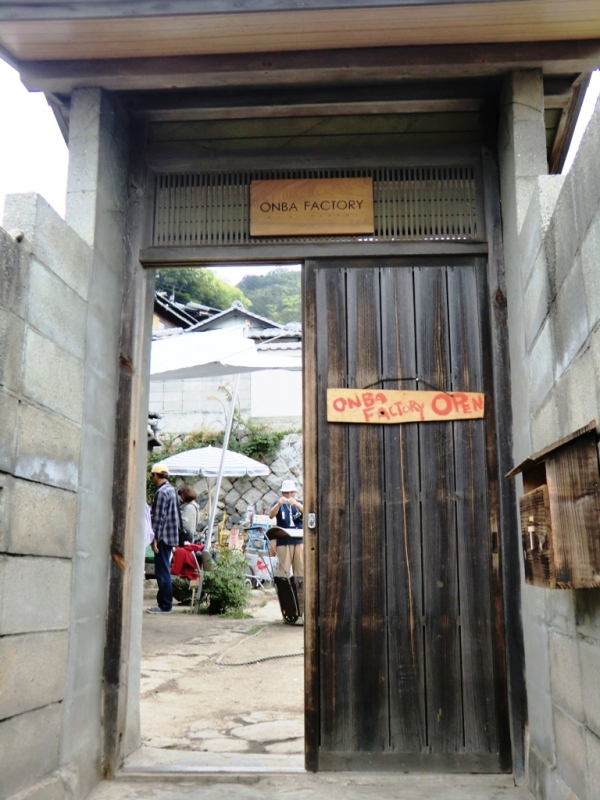 That day, we were lucky, it was open (just kidding, it was open everyday during the Setouchi International Art Festival)

The Onba Factory is actually made of two buildings. On the left, the main building and, separated by a courtyard, one can find the actual workshop on the right upon entrance.

In the main building -as well as in the courtyard- one can admire the Works Onba, the Onba that the artists created following their inspiration of the moment. In this building, you will also find pictures and concept sketches of the My Onba, the Onba that belong to the people of the island that have been redesigned by the artists. As I already mentioned in the previous post what I really liked about this art project was the fact that the local population was not left aside and that on the contrary they were taking an active part in the whole thing. For example, they did give their input concerning the look they were expecting for the redesigning and rebuilding of their Onba. Actually, all of the My Onba were pictured with their owners on the picture wall, right next to the sketches, one could also see sketches directly made by the owners and suggesting what they wanted for their Onba. There could have been nothing on this wall, or just the pictures what the artists had done (Onba and/or sketches). However, the fact that the pictures were of the people as much of the artwork and were combined with the drawings made together by the artists and the old grannies of Ogijima was very touching. There was no better way to represent this respect and this love that the Onba Factory artists had for the island and its inhabitants. 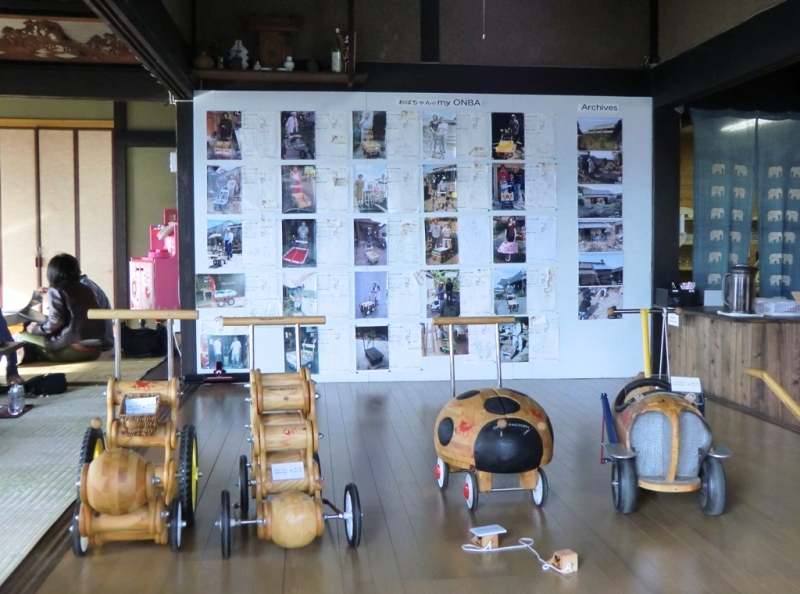 In the background, you can see the pictures and sketches previously mentioned. In the front, the proof that Onba are not only for old ladies.

The place was also a café during the Festival. 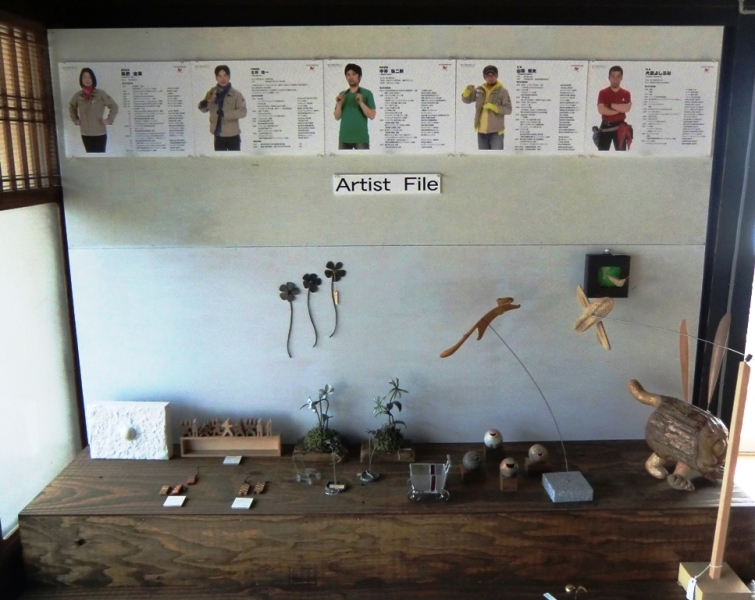 Artist Files and a sample of their personal work.

Also, notice the colors of their shirts (not always easy to see under the Onba Factory jackets): red, yellow, green, blue and pink (for the girl). Yes, you have discovered their secret. The Onba Factory members are actually a Super Sentai group!!!
(so does this mean that if all of the Onba are assembled together they all become one giant robot?) 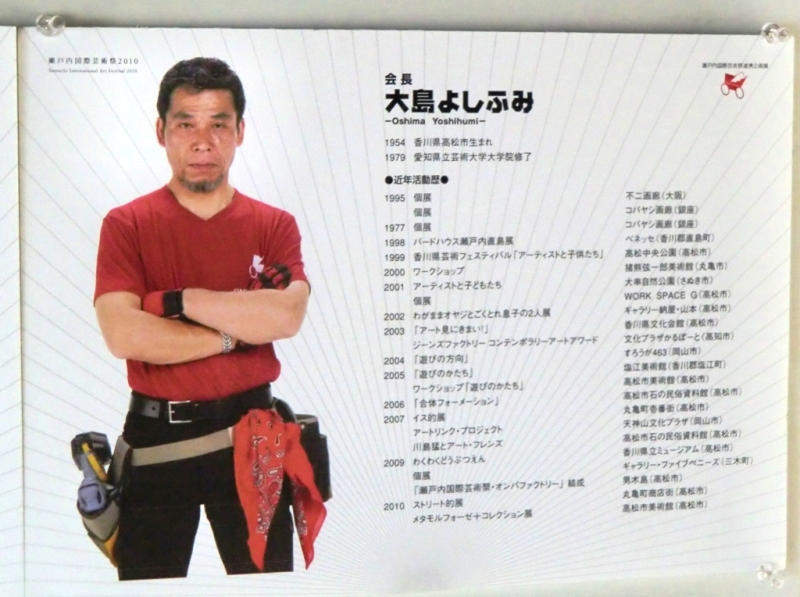 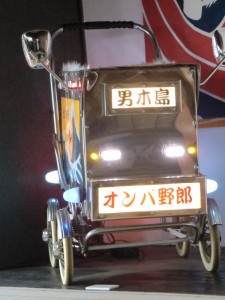 Mmm... This whole "Mecha Onba" theory could be more than just a theory... 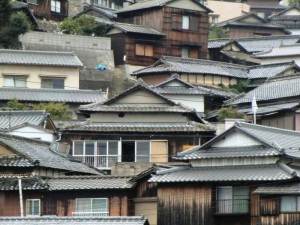 Onba Factory's main building (in the center) see from Ogijima's port. Also, notice the flag on the right.

Meanwhile, in the workshop. Well… Artists worked in the workshop. And once again, I must admit that it was a very pleasant sight to not only see artists being present on the grounds of their work, but see them work there too! As I said in a previous post, I fully understand that many artists couldn’t stay on site during the whole three months that the Festival lasted (not mentioning the extra five months some sites stay open), but very often, it was a little sad to see artworks “alone” on their site. Of course, I know it doesn’t mean that artists stopped caring about their work and about the Festival once they had done their part, but what about their actual interest for the area and its people? Maybe I’m just too harsh on them, but I wish more artists had been like the Onba Factory ones. 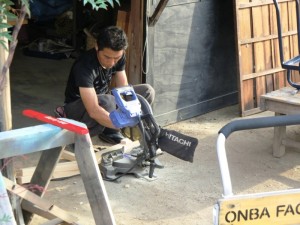 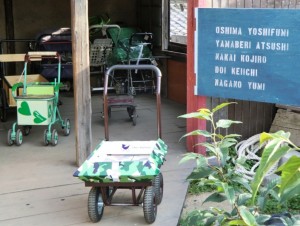 Humor is everywhere in the Onba Factory if you look closely 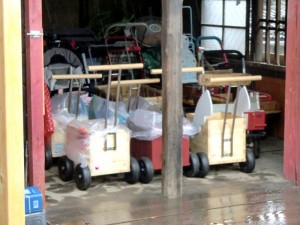 I’ll end this post with a few pictures of Works Onba that were exhibited in the Factory’s courtyard. As you’ll see, although some didn’t always have an obvious utilitarian purpose, they nonetheless were actual functioning Onba. Actually, the artists used some of them to carry materials from the port to the building while setting up the Onba Factory during the weeks prior to the beginning of the Festival, in a way to show the population that they cared and respected them and their culture. 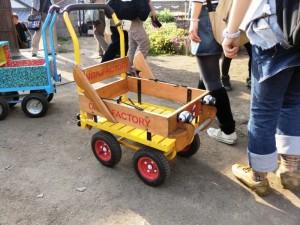 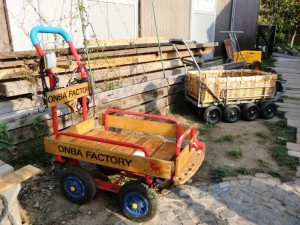 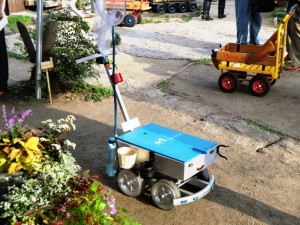 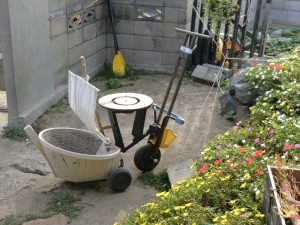 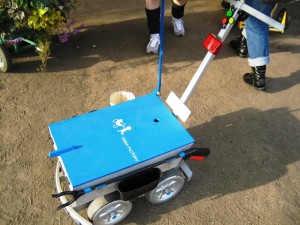 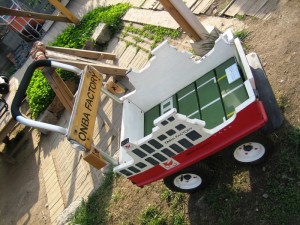 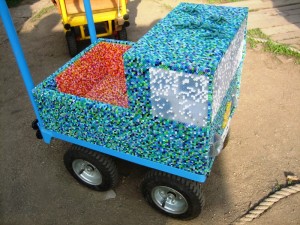 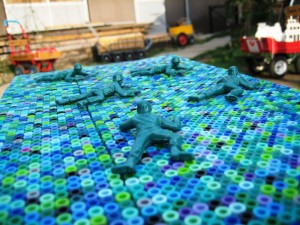