If a few days ago I told you about Onba, it was not a random decision from my part. It was because for the next few days I am going to talk about Onba Factory (オンバ・ファクトリー). OK, I won’t beat around the bush, Onba Factory was my very favorite artwork from all of the Setouchi International Art Festival. Maybe I’m not totally objective. I don’t know. Maybe the fact that it was located on Ogijima influenced me. Maybe the fact that I met one of the artists did too.

Or maybe not. Maybe it was just the most interesting project out there. After all, I met a couple other artists. And as for the works on Ogijima, I really do think they were some of the best, and I would have thought so even if they had been located on another island.
However, as I explained elsewhere, one of the reasons those pieces worked so well on Ogijima (and same thing goes for most of the works of the Festival) was because they “belonged” there. They would have had a different tone, feeling, meaning had they been located on another island.
But let’s not stray too far from our topic. Let’s talk about  Onba Factory. 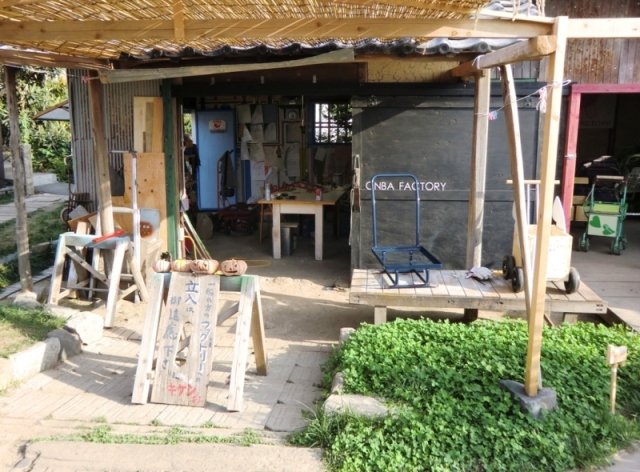 So why exactly is it my favorite work?
Simply, because in my eyes, it is everything contemporary art should be, and because it answers precisely the announced goal of the Festival, that is to promote the islands and the area through art, with a longer term goal to revitalize them. Sure, the very fact there was a Festival going on attracted a lot of visitors who did discover the islands thanks to it, hoping they will come back and that some tourist industry can somewhat develop like it is already the case with Naoshima.
However, while it is true that the works of art contributed to this by they mere presence (most of the artists came only to set up their projects and went back home right after, not that I blame them for that, not all could just stay in the area for three months), Onba Factory goes further. It inserts art on Ogijima in an original and playful way which, not only respects the island and its culture, but also sublimates it.

Personally, I do find it to be a genius idea to take this ubiquitous element of Ogijima‘s culture that the Onba is, turn it into art, and also involve the local population as their own Onba that they use everyday become works of art. I especially like the fact that those artworks are not exhibited but “released” on the island where they keep on living their Onba life. 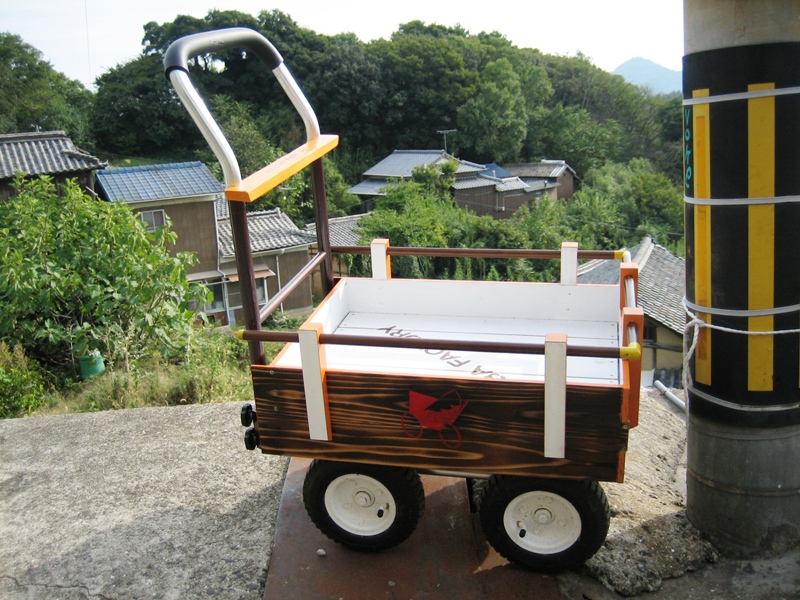 Now I want to show you a short interview of Mr. Yoshifumi Ōshima, who is Onba Factory‘s Boss. It is the second interview (out of three) that I did during the Festival and it is by far my favorite. This thanks to Mr. Ōshima’s personality. I met him totally randomly as he was having lunch with Mr. Tanigawa, and he nicely accepted that I disturb him two hours later in the Factory. Despite the language barrier (I’ll never thank 康代 enough for all of her help), I met a very kind, soft-spoken man with a true passion for Ogijima and its people. I really do hope that our paths meet again one day.

“And what about the pictures?” you may be asking.
They’re coming very soon, but you’ll have to wait just a little. Now, I just want to make sure you watch the video in its entirety and that nothing else, such as pictures, disturb you and prevent you from doing so. Because don’t lie, I see how many people have seen the videos I post, and this number is always way below the number of people that saw the page in which they’re usually embedded (ok, I admit, I sometimes do the same on some of the blogs I read), but in this case it is different, if there is only one video you watch on this blog, let it be this one.

Pictures will be coming sooner than you think, do not worry.

Finally, let me add that if you’re ever in Kagawa or Okayama (in other words, in Ogijima‘s area) these days, the Onba Factory is still open every weekend from 10 am to 4 pm until March 31 at least (and maybe longer?). It will only cost you ¥ 300 (yes, I know, it was free during the Festival, but this time, we need to help the people that help keep it open, such as the people from Koebi). There, you will be able to admire the Works Onba, most likely meet some of the artists (I assume that Mr. Ōshima is there every weekend). Also, during the Festival, the main house also served as a very charming café. I’m not sure if it is still the case, but we never know. Finally, if you can read Japanese, I advise you to check out Onba Factory‘s blog, where you’ll see all the little events they organize quite regularly with the people of the island and more.