As soon as we got off Meon back from Ogijima, we headed towards the Takamatsu Sunport‘s lawn where our last stop of the day awaited us.

While not much happened in Takamatsu itself during the Spring Session, it’s probably here, especially at the Sunport that the most important event of the Summer Session is taking place as a small village appeared and will remain there until September 1st. It is called Bengal Island, and it is comprised of two main things:

The main one is a delegation of sixty or so people coming from Bangladesh. This year, the Setouchi Triennale has decided to honor one country – Bangladesh – and has invited a certain number of its best traditional artists and craftsmen to show and teach about their crafts and their culture to the Triennale’s visitors, under the general name of Bangladesh Factory. The main way they’re doing this is by working and creating there – on site – all month long. A great idea. First, I think I’ve learned more about life in Bangladesh and its traditional culture in two hours than in all of my life. Then, more generally speaking, I hope that this idea of inviting a country will be renewed in future editions of the Setouchi Triennale. It’s a wonderful way to learn about other cultures (and we all know how much Japanese people lag in that domain, and not just them) and meet people from distant places in the world.

And in a similar fashion, the second part of Bengal Island is a dozen or so of (mostly) Japanese artists, some of them having works exhibited in the Triennale, who are staying in Bengal Island for the whole month, creating artworks in front of our eyes and/or running workshops so that you can give it a try too. It is Island Art Studio.

In other words, during the end of July and all of August, Takamatsu Sunport will be place of creative effervescence and cultural exchanges like I wish we could see more often, all year long and everywhere.

Here is the first series of pictures devoted to the event. Expect many more, as I’m planning on going there as often as possible to see how things evolve and how art and bonds grow. 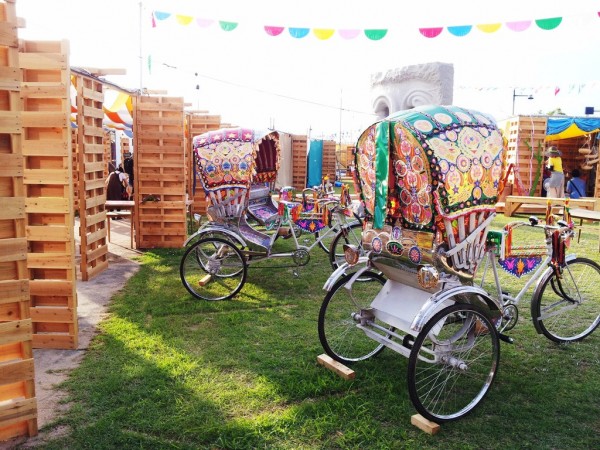 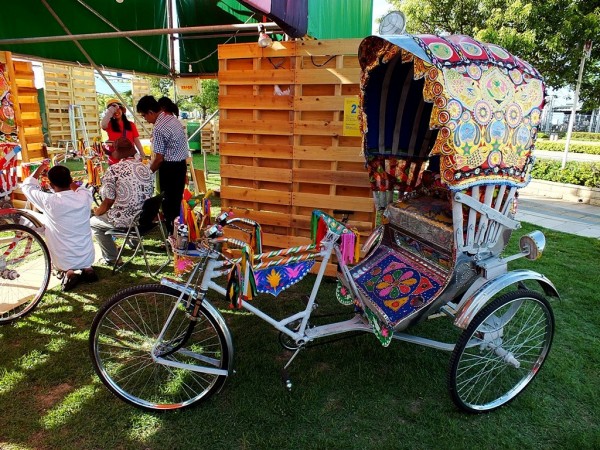 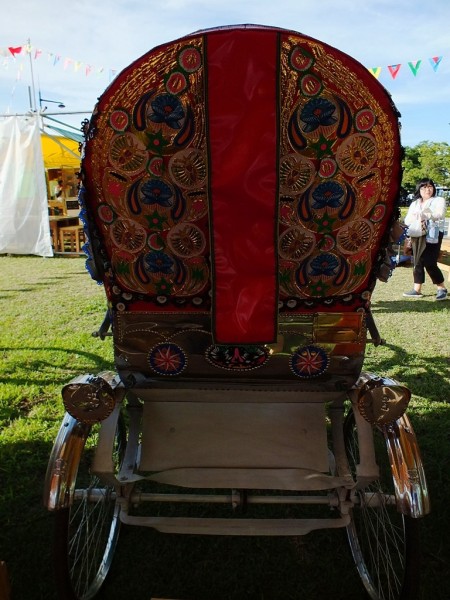 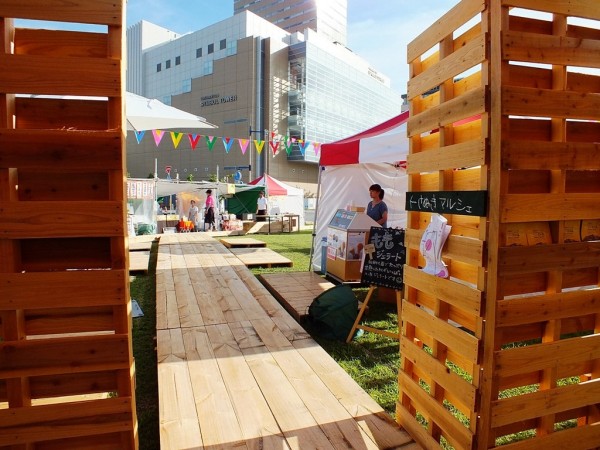 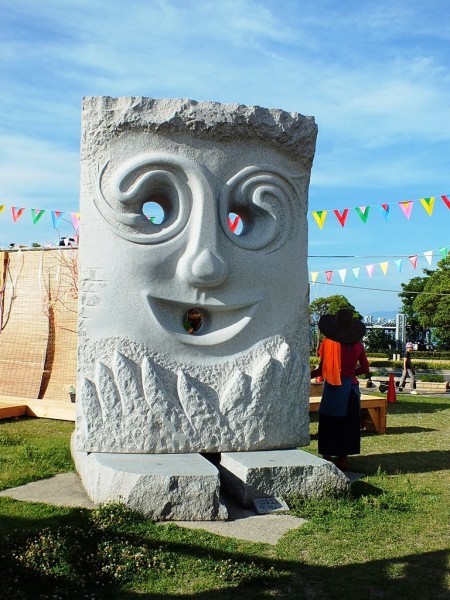 This sculpture is not part of the Bengal Village. It’s been there (in the Sunport) for a little while now. 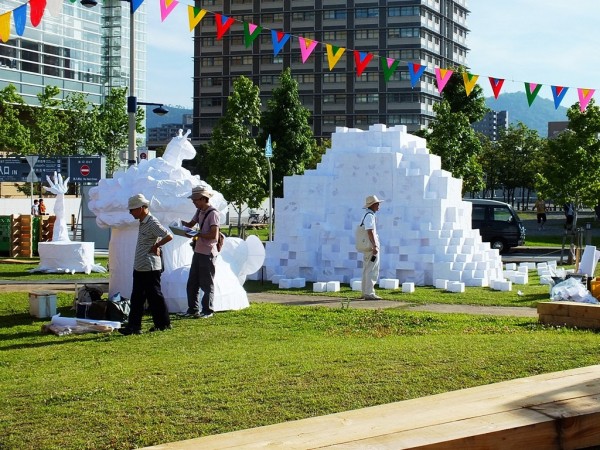 Project for Sea-Light in Takamatsu is back in town. 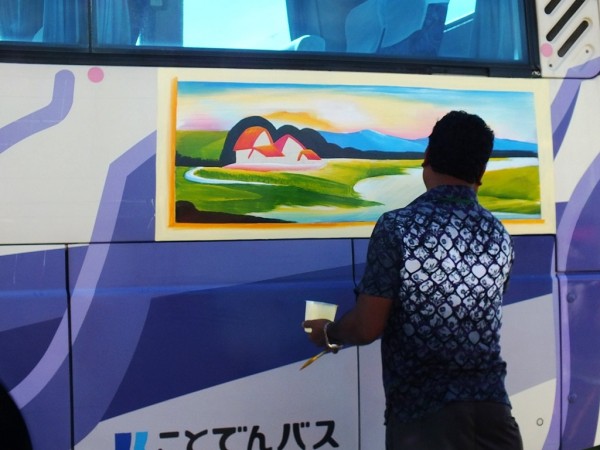 Debu Achargg will be painting this Kotoden bus (the local company) and more (?) in Bangladeshi style all month long. 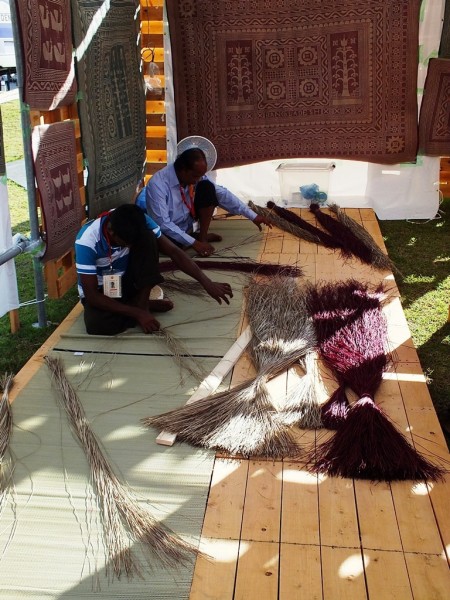 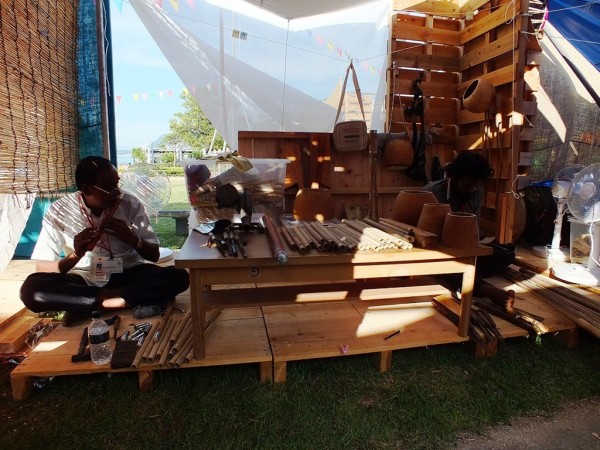 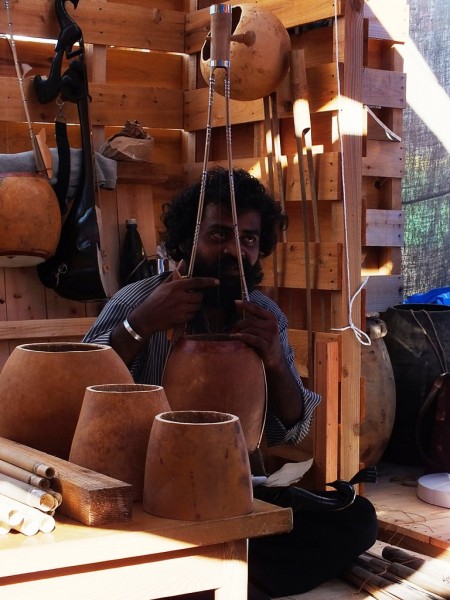 Shariful Islam makes and plays ektara and dotara. They are among the oldest music instruments of Bangladesh. Ektara have only one string, while doktara have between two and five. Ektara are usually made of dried gourds and a bamboo stick, doktara are made of wood and cowhide. 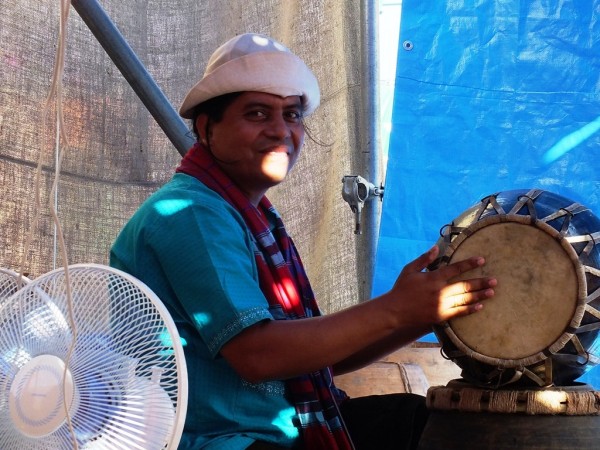 Sibnath Sibu makes and plays dhol, double sided drums made of mango wood and cowhide. It probably is the most common Bangladeshi music instrument.

And sometimes the three of them go on an impromptu jam for visitor’s pleasure: 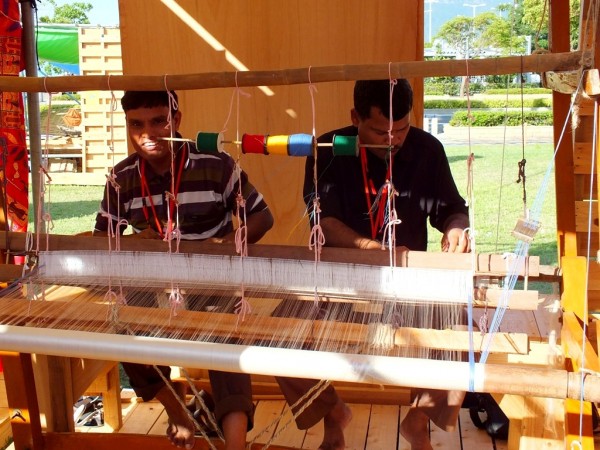 Jamdani weaving, one of the finest fabrics of Bangladesh (usually made of silk and/or cotton). It appeared from the fusion of the arrival of muslin in the 14th Century and more than 2,000 years old weaving techniques.

Runa and Kahinur Begum make Nokshi Kantha that are quilts made from old saris sewn together. Expressions of feminine creativity, they are a valued source of income for Bengal women. 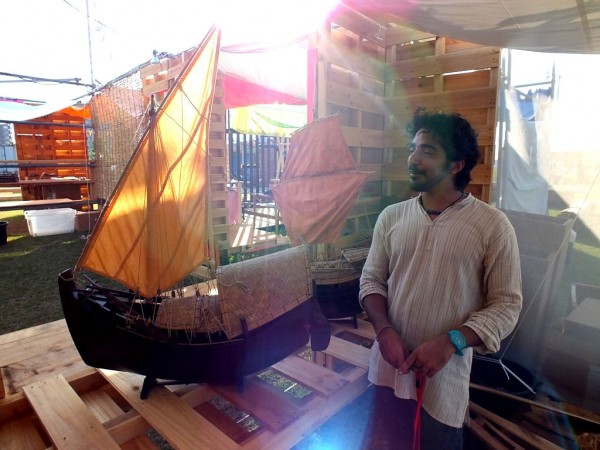 For some reason (because he was extremely friendly and nice) I had a great conversation – twice – with Wasama Doja who is part of an organization whose goal is to preserve the knowledge and skills of nouka building. Nouka are traditional Bangladeshi fishing boats that have been used to centuries and are unfortunately being replaced by more modern (and less durable and eco-friendly) boats. The craftsmen who came with him – Abdul Halim and Vojon Chandro Sutradhor – will be building a nouka over the month they are here. I will most likely tell you about them again. 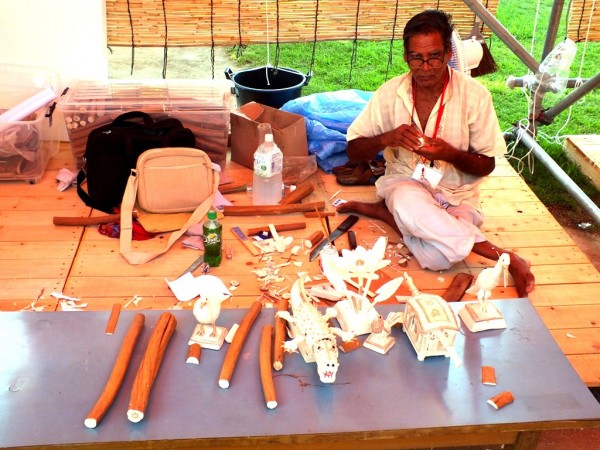 Gopendronath Chokroborti sculpts sponge food. A quite popular traditional craft in the subcontinent. 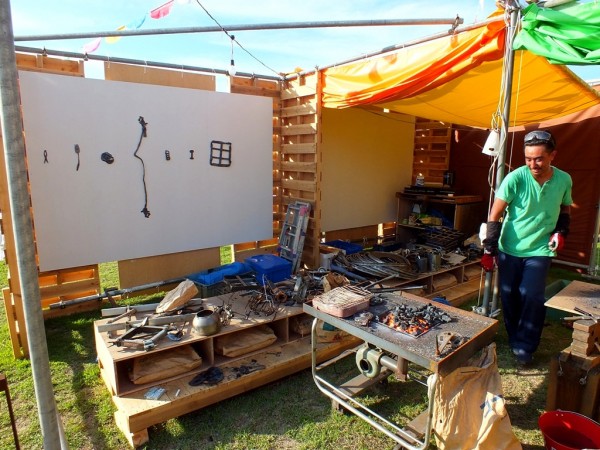 Oza Metal Studio Takamatsu, a forge in Sunport managed by Atsushi Ozawa who also has a work of art in Uno Port. 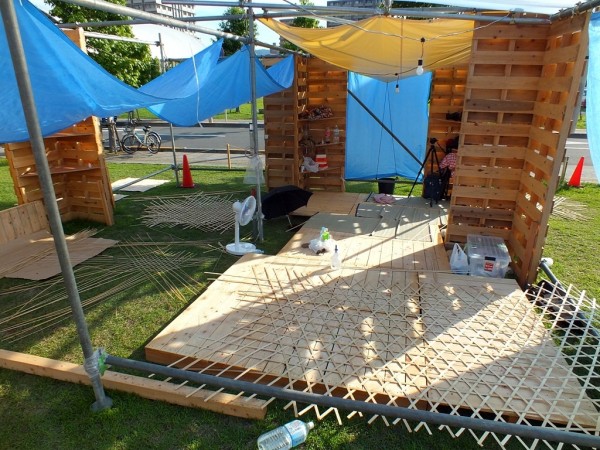 Takashi Nishibori is creating a new piece called Weaving Weaving right before our eyes.
(check out Corridor of Time his work currently on Ogijima) 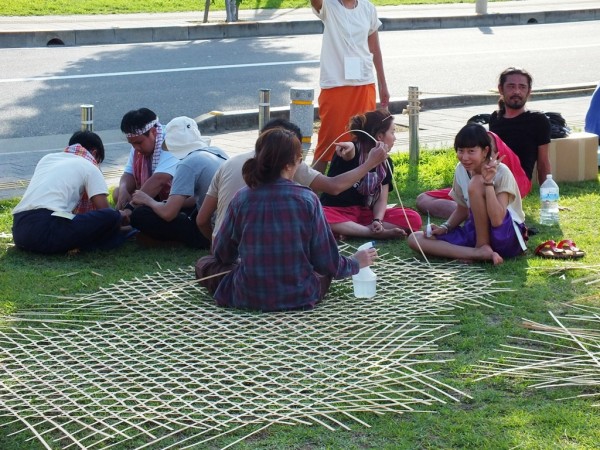 Ok, on this picture, he’s kinda taking a rest (on the right side of the picture).
To his defense, he just had returned from Ogijima too. 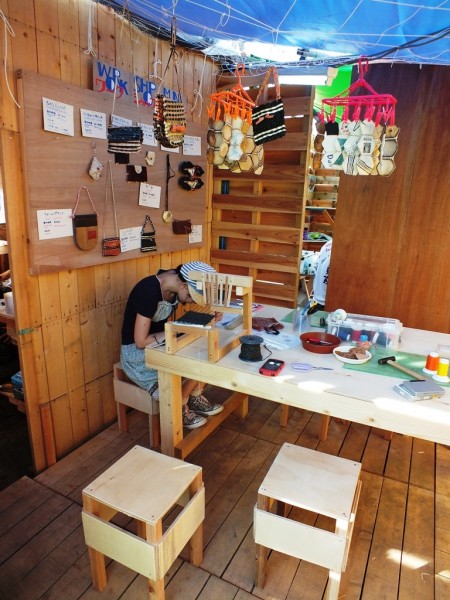 Skin Project crafts all sorts of objects (sandals, handbags, necklaces and more) with all soccer balls! 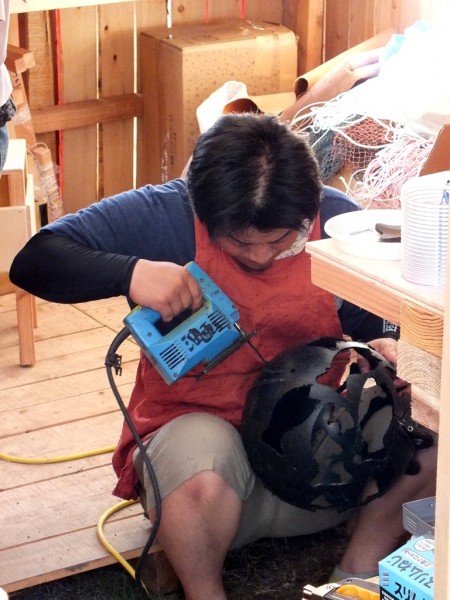 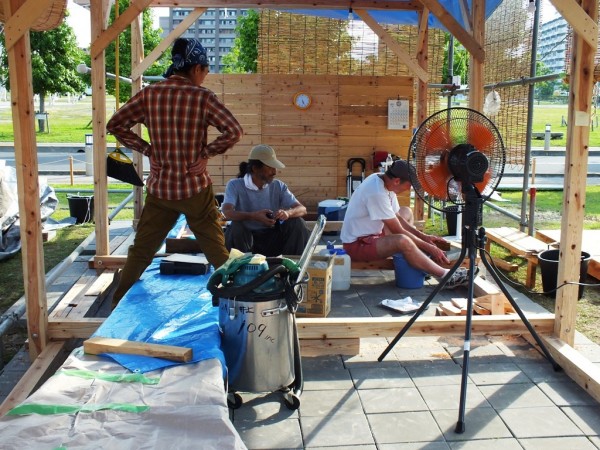 Douglas Brooks and Koji Matano are building a soku tenma, a Seto Inland Sea traditional boat that finds its origins on Naoshima. I will tell you more as the advancement of the boat goes.
For more information let me advise you to check out those blogs and sites:
Douglas Brooks’ blog (in English)
Building Setouchi Tenma sen (in Japanese and English)
Hacamare (in Japanese only) 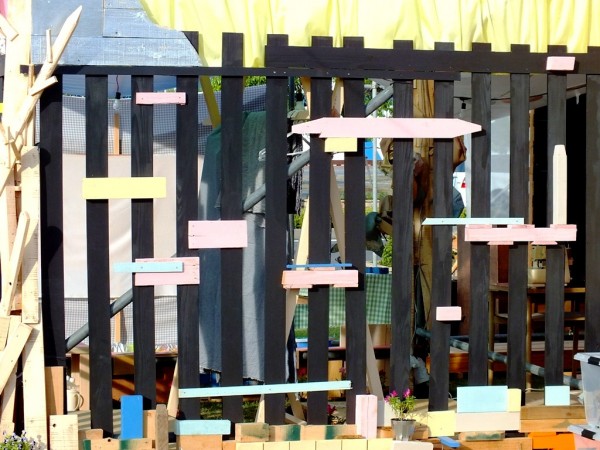 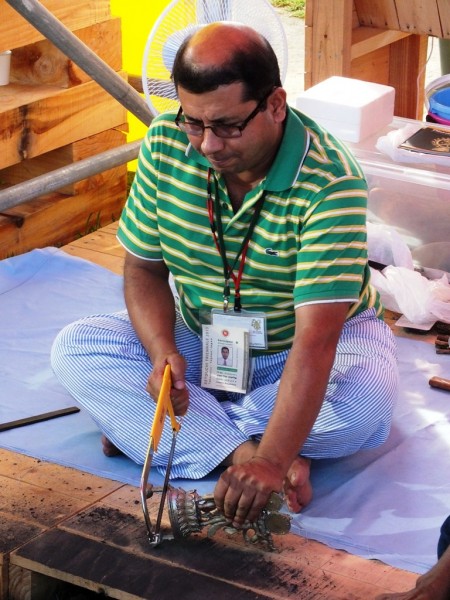 Sculpting metal. I’ve always wondered how those small metal statues were made. Now, I know, and I’m impressed, as only manual tools are being used: saw, hammer and chisel, etc. (the sculptor is either Mohammad Manik Sarker or Babul Akhter Chowdhary). 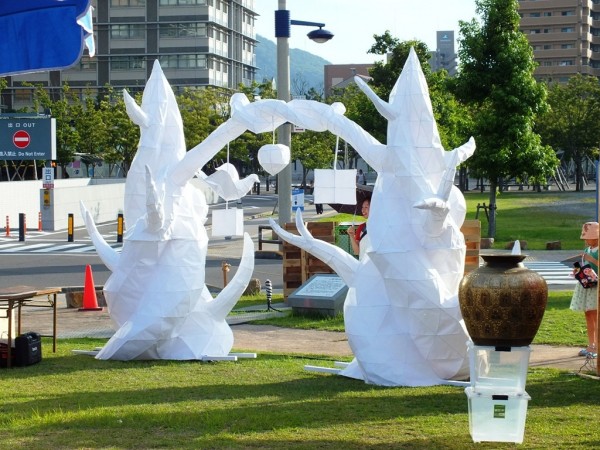 Project for Sea-Light in Takamatsu 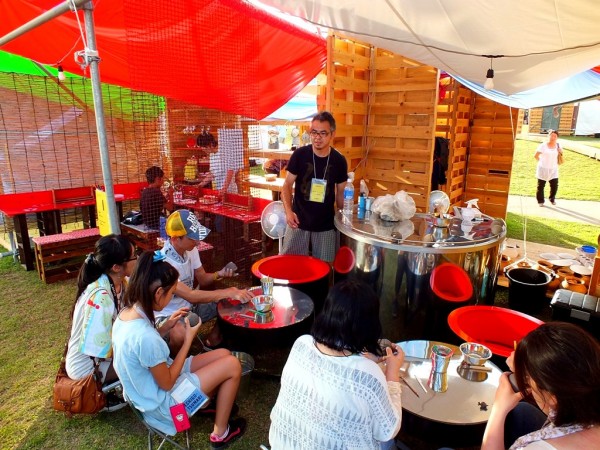 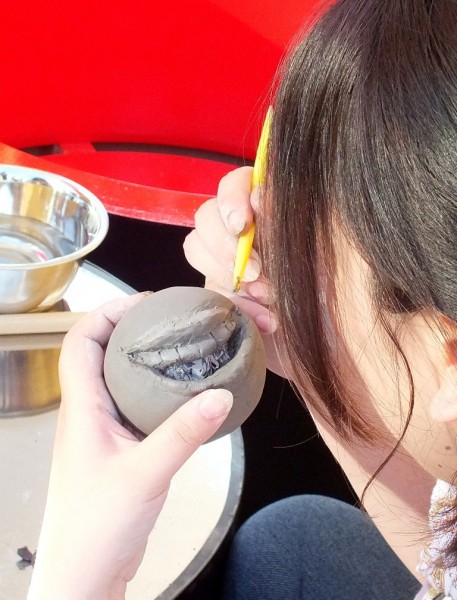 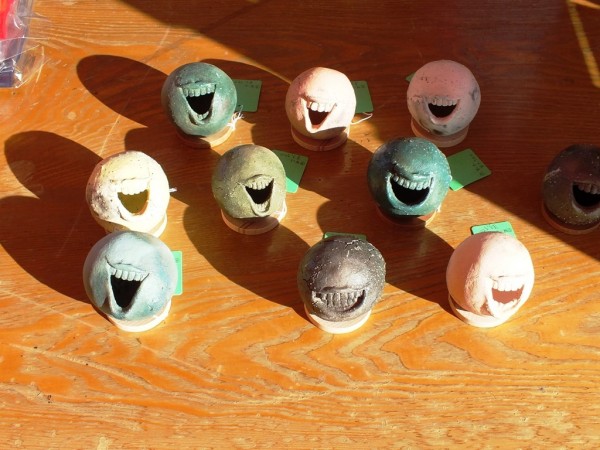 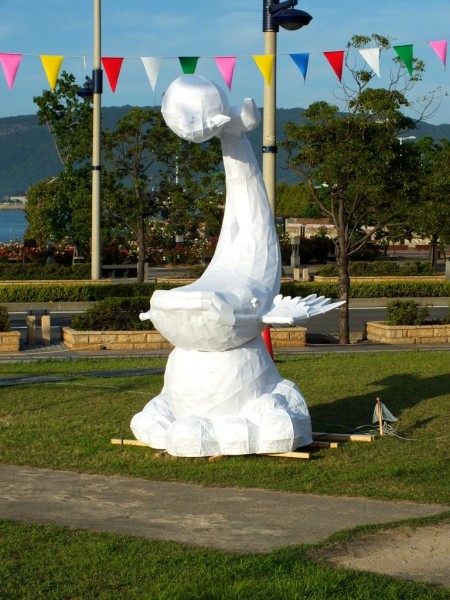