Preliminary note: a lot of people have been coming to this site lately looking for information about the various islands and art projects, most likely because they want to send their own application for the Setouchi Triennale 2013 (the deadline approaching not being stranger to this increasing number of new visitors, I assume). To these new visitors, first of all, welcome and I hope you like what you’re finding here.

More important, if you plan on sending an art proposal for the next edition of the Setouchi Triennale, I really advise you to use the quotes contained in this post as guidelines for your project. In short, don’t do this to add another line to your resume, but ask yourself how your art project will fit in and will be beneficial to the community who lives on the island where you plan on having your project implemented.

That being said, good luck and I hope to see your project turned into artwork next year.

I have already talked about Onba Factory here, several times, but this is not a reason not to talk about it again, especially because it is my favorite place on Ogijima.

I went back there a couple of weeks ago, to show it to my parents along with the rest of the island (they returned safely back to France, this is why I have time to post again here) and I seized the opportunity to take new pictures and to say hi to Mr. and Ms. Oshima. By the way, it was the first time I was going there without 康代. I was a bit afraid that I wouldn’t be able to communicate with them, but while we didn’t talk about complex things, I had the pleasant surprise to realize that the little Japanese I know, and the little English he knows (and that’s really not a lot in both cases) still allowed us to understand each other just enough to spend a very good moment together.

For the rest of this post, I’m going to do things a little bit differently from usual, as most of the text will be made of quotes from various people found in the Onba Factory Book. 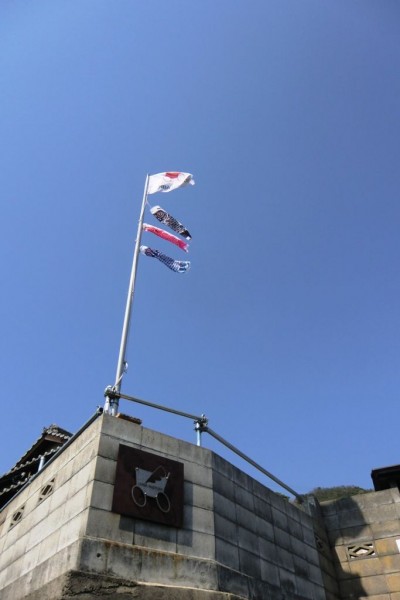 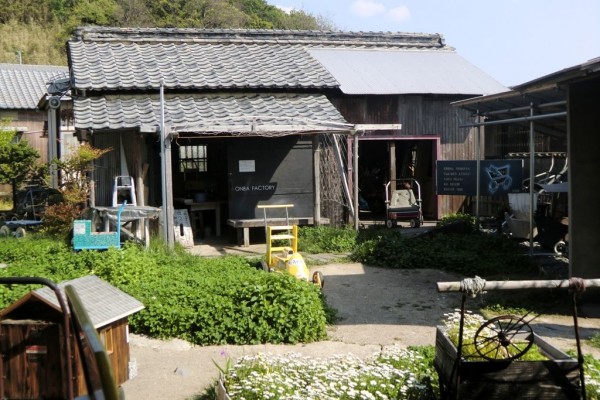 For me, the Setouchi International Art Festival was like a pilgrimage ; a quest through the oppressive summer heat for answers to the question “What is the power of art?” I crisscrossed the sea, blinding in the sun’s relentless glare, and followed the ribbon-like roads glued to island slopes, up and then back down again. Dulled by overexposure, rarely did I encounter the thrill of art that transcended an excuse for pilgrimage.
In the end, only two things remained seared on my memory: the stone autopsy table, cracked down on the middle, on Oshima and Onba Factory on Ogijima. Both had their own unique wavelength, pulsating with life itself; both had a innocence that pierced like gamma rays through extraneous pretensions. In particular, everything about Onba Factory, its clarity, vitality and joy, had a startling freshness.
The catalogue DESIGN FOR THE OTHER 90%, which explores the meaning of design for people who are too poor to enjoy its benefits, has become the 21st century bible for designers. In the Onba project, I see the birth of ART FOR THE OTHER 90%. I welcome with open arms the vibration these artists have generated in Setouchi.

Noboru Tsubaki (artist, the only one who had two works chosen for the Setouchi International Art Festival 2010) 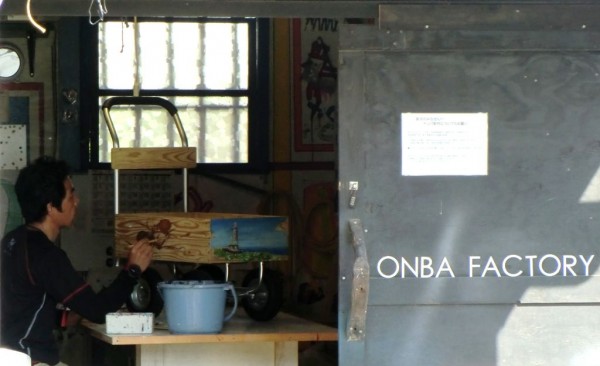 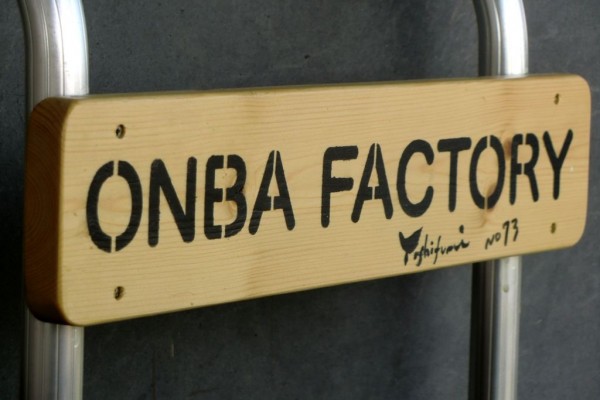 Ogijima is special and we sought artists who would forge meaningful bonds with the local people and bring out the island’s distinctive features. Onba Factory fit the bill perfectly and their work was a hit with visitors and islanders alike.
The tragic fire that destroyed Oiwa Island by Oscar Oiwa proved that the Onba team was part of the Ogijima community. The islanders still talk about how the Onba members stood with them as they fought to contain the flames.
The Onba workshop, where the team refurbishes the islanders’ beloved onba, has the magical quality of Charlie’s Chocolate Factory or a local mechanic shop. Children play in the rustic setting as the artists tinker.
The islanders are only too happy to have their onba “improved”. In fact, they are now coming back for more! Some have ordered a second or even a third for specific purposes or special “outings” and several coordinate their fashion to match their onba. (…)
The Onba Factory project has limitless potential. Already it promises to become a major local enterprise. More than a few visitors have requested miniature onba and some even want the real thing. Like 17th century artists Tawaraya Sotatsu and Ogata Korin, the Onba members have the talent and leadership to create art that defines their era.

Fram Kitagawa (Art Setouchi Director and much much more, basically one of the most important person in Japan as far as contemporary art is concerned) 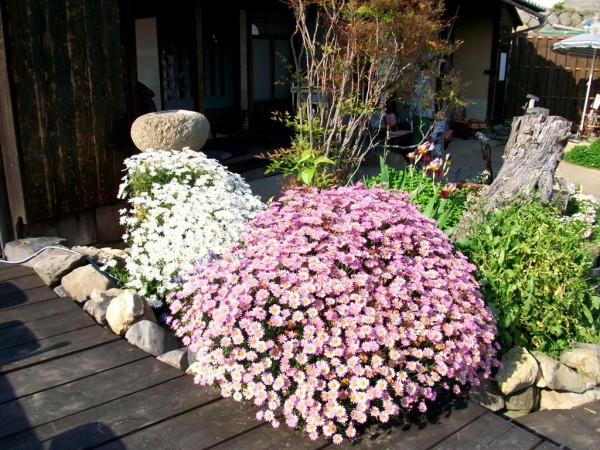 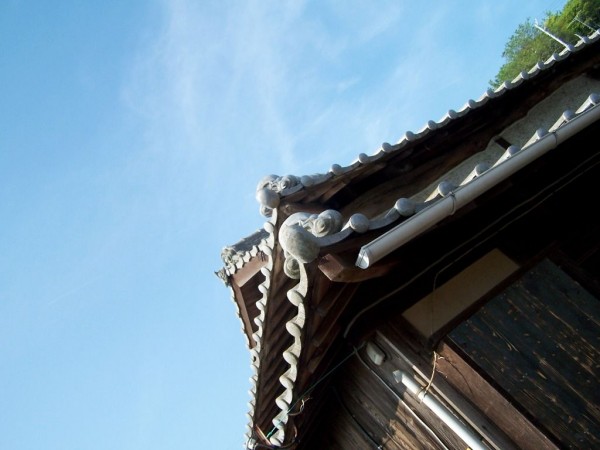 More than half a year has passed since the end of the Setouchi International Art Festival… As my memory of the merciless heat fades, I am increasingly aware that if art has a driving force, it must be ‘staying power’. The Festival may be over, but Onba Factory has continued to evolve since the closing ceremony. You can’t start a chemical reaction once it starts by saying “it’s over.” That’s the nature of creation.
A festival is like a fireworks display. Success lies in the preparation. Likewise the success of the festival in 2013 depends on the quality of the time we spend right now with the people who live here. The chemical reaction between this island and art is ongoing. Ogijima has many resident “experts” with skills and knowledge to share. A new perspective can transform the hard labor of farming into a lot of fun and the island into an entertaining playground. Only when this “festival” created by the islanders and Onba Factory comes to fruition will the end of Onba Factory come in sight. Until then, we’ll carry on! 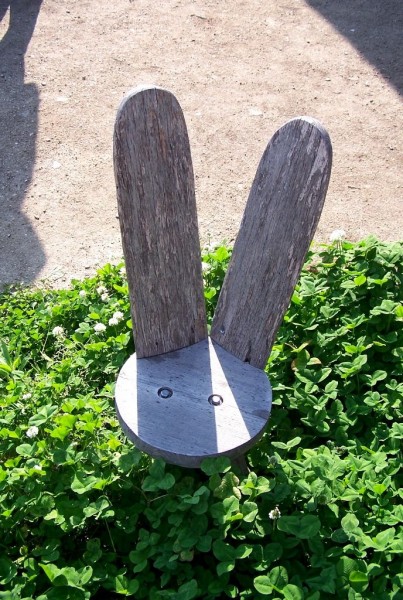 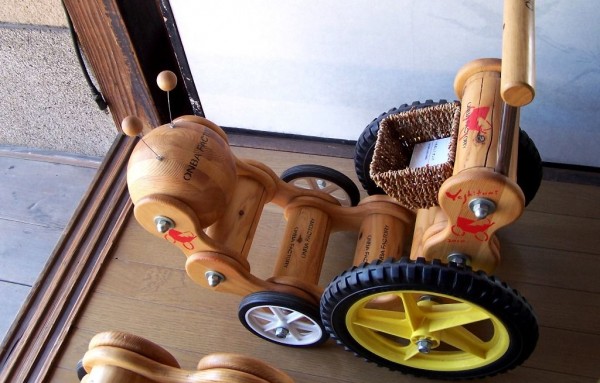 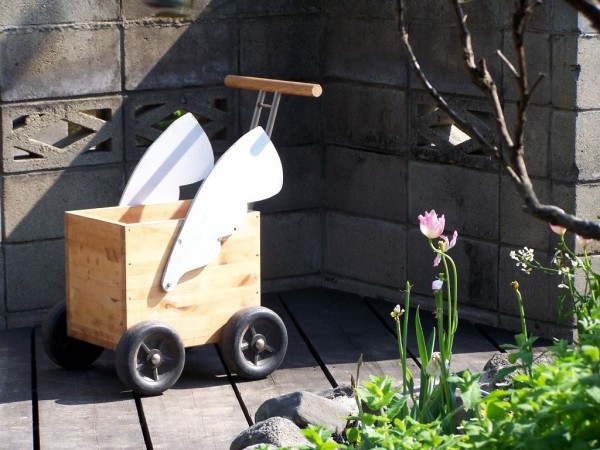 Onba Factory is part of the community now, thinking about its future with us. Since the festival, more people want to move here. We’ll keep working with Onba Factory to make Ogijima a home for more than cats and old people. 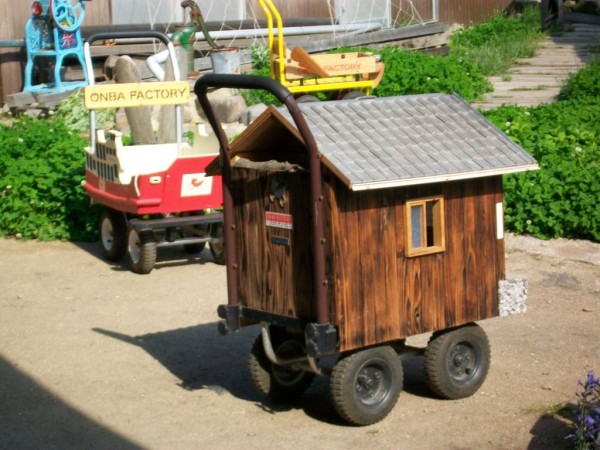 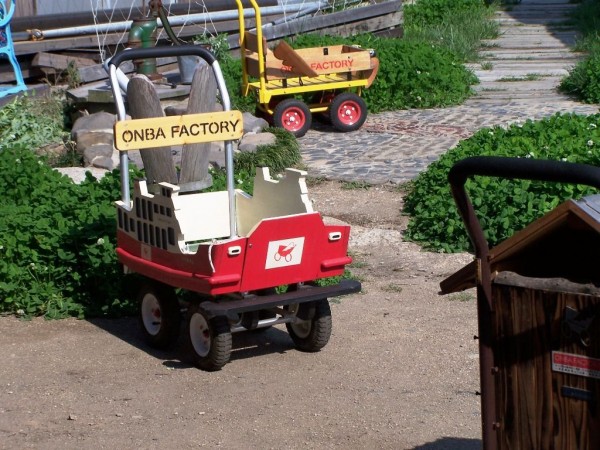 Meon 3 Onba by Yoshifumi Oshima (note that those Onba are fonctional, Mr. Oshima uses Meon3 Onba every week-end to carry his stuff between Takamatsu and Ogijima) 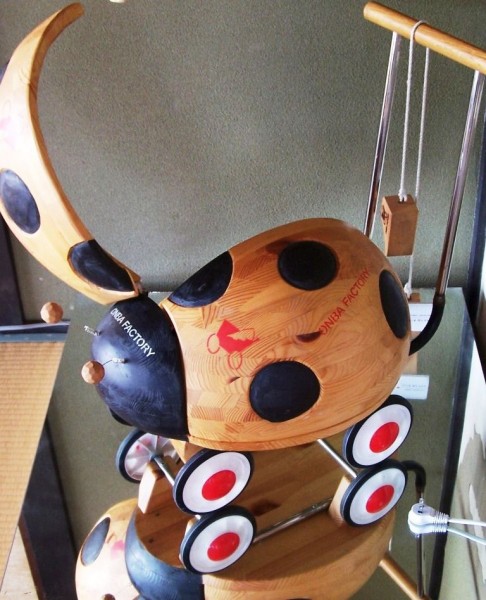 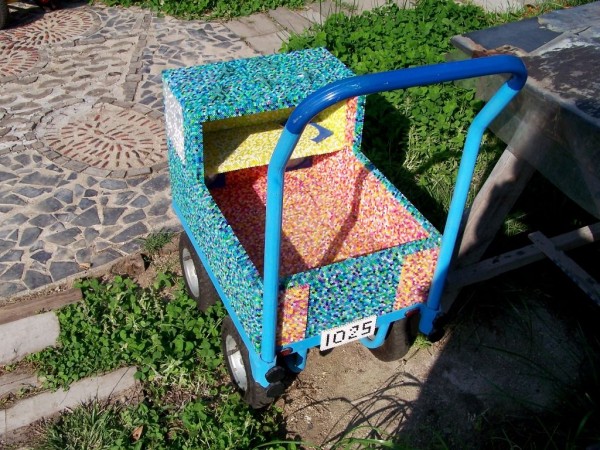 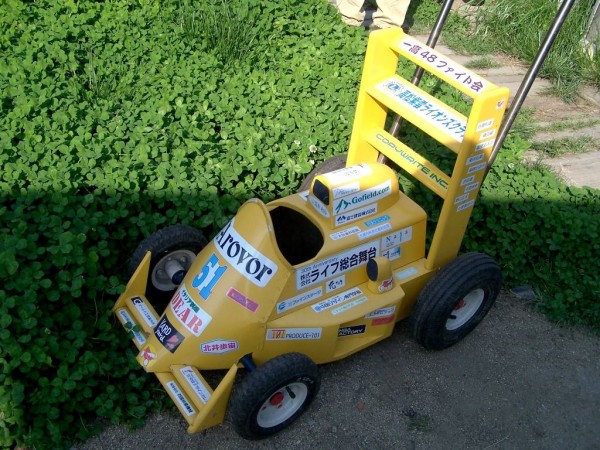 I wanted people to see that art and artists don’t have to be inaccessible to all but a select few. We’re right here, within easy reach.

Actually, Onba are not such an old tradition on Ogijima. They started to become common on this island when its streets were paved in the 70’s. Before that, men used to carry things on their back with those sorts of harnesses called Oidai (on the right side, an original one, on the left side a recreation by Onba Factory). What about women? They used to carry things on their heads with just a small fabric cushion (called Wa or Atamasuke)! So if you think it’s hard to push an Onba up the hill, think how harder it was before.

“Monotsukuri.” That’s what we do, but it means much more than just “making things”. It means connecting with our surroundings, with people, with playfulness. 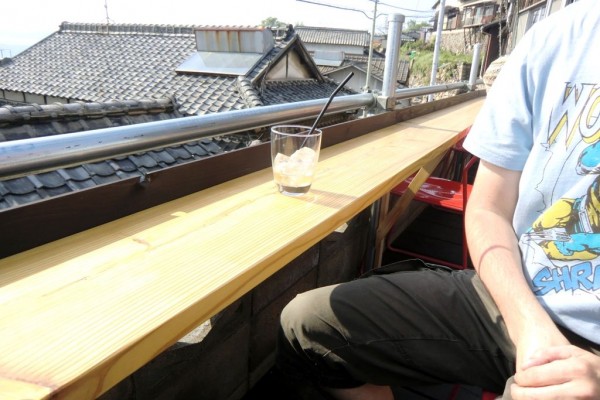 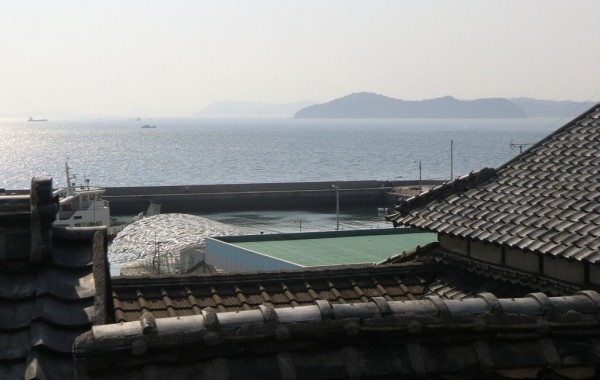 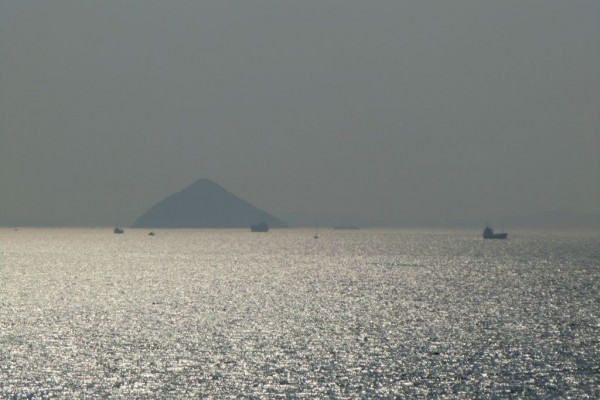 That being said, maybe your prefer café terraces with a view on the gas fumes from the traffic in the street. To each its own, I’m not judging. 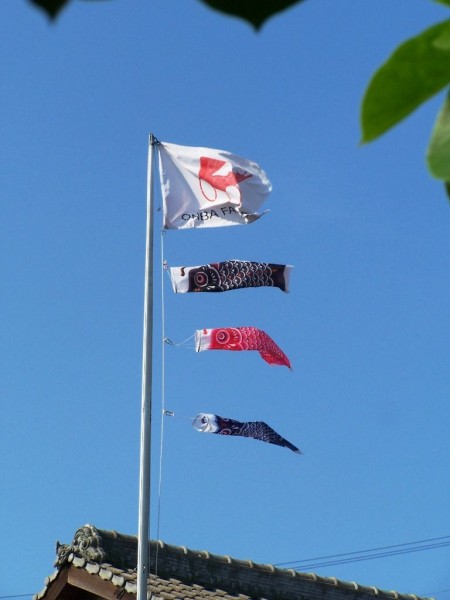 I’ll finish this post with a big Thank You to

who were extremely nice, friendly and welcoming, just like every time.

There are a few genuinely good people on Earth. They are some of them. 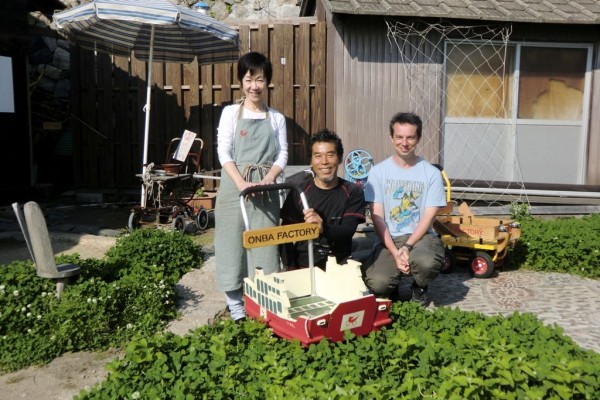 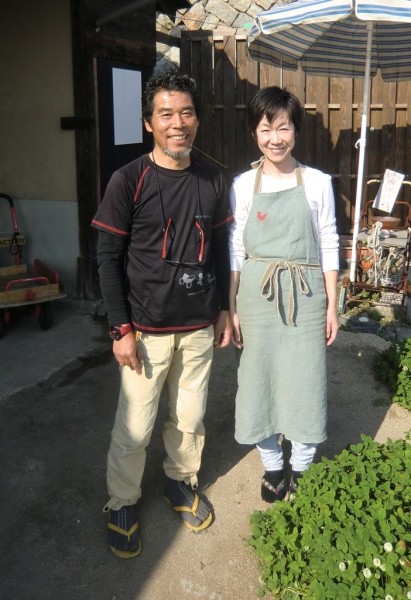 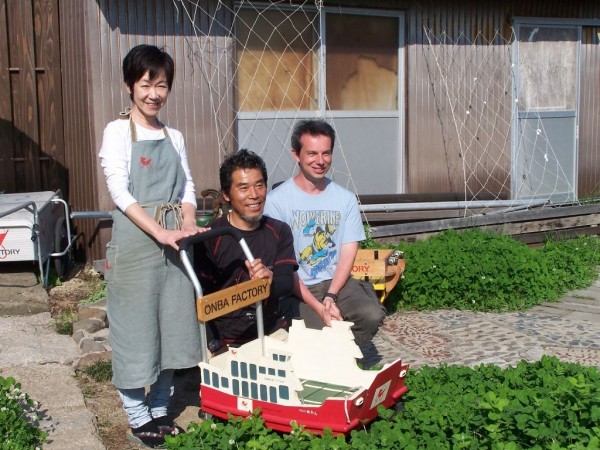 I can never thank them enough for their warmth and friendliness.

Before I end this post, please note that all the quotes are from the Onba Factory Book, which tells the story of Onba Factory from 2009 to 2011 (it was released a little less than a year ago). If you’re interested, it’s available on the Japan  Amazon as well as in the Onba Factory of course. They are published here with Yoshifumi Oshima‘s authorization. Translations into English were made by Cathy Hirano. 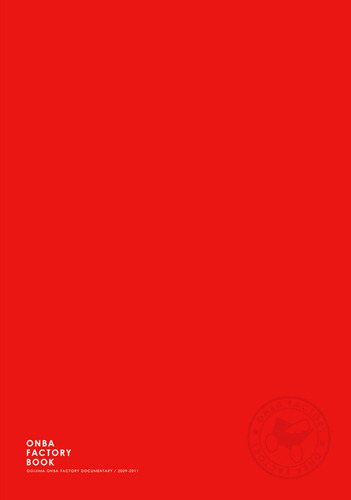