As you may know, the Setouchi Triennale’s main goal is to revitalize the islands of the Seto Inland Sea.
The Triennale is an amazing idea to trigger that revitalization, but while it is necessary, an art festival every three years is not enough to attain that goal. If one wants people to find the islands attractive enough again to move there (and prevent people already there to leave), they have to become attractive places all year long, not just once in a while.
Many methods are being tried to reach that goal, and there is no tried and tested recipes for it. One of the things – beyond art, its natural beauties and all the things I usually show you – that make the area fascinating is that it has become a large field of experimentations towards this revitalization with its successes and failures, with every island having its specific assets and weaknesses, etc.

Ryo Abe (of Shima Kitchen’s fame on Teshima) is one of the people who has taken an active interest on Ogijima’s revitalization. For the past four years, he’s been going to the island quite regularly, and has organized a few events as well as small symposiums devoted to the topic. For example, the latest one was about what to do with the abandoned houses (unfortunately, I haven’t been able to attend them, mostly because of the language barrier).
Last month, however, he was the organizer of a very different kind of event, as he invited his friend, composer Yoshihide Otomo to come to Ogijima for a pretty unique concert.
I didn’t know Yoshihide Otomo before, but if you look him up in Google and/or youtube, you’ll find a very diverse and interesting field of work. Actually, it’s not completely true that I didn’ know him, as I’m quite familiar with the theme song of the dorama Amachan, which has become quite famous in Japan (I don’t even watch any dorama, and yet I know this one and its music, that’s how famous they are).
So, Yoshihide Otomo, accompanied by Ryoko Egawa and Jin’ya Kimura, came to Ogijima on October 19th to lead a very interesting music workshop.
Pretty much anyone could join – as long as you can somewhat play music I assume – and as it’s not my case, I took pictures and videos instead.

As we had come to Ogijima for this, but also a few other things, at first, we followed the workshop participants only intermittently, to really join them only about halfway through.
We met them a first time as they were leaving Kamomeya and heading to Toyotamahime shrine: 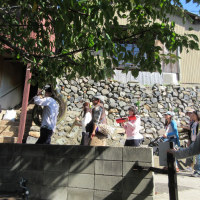 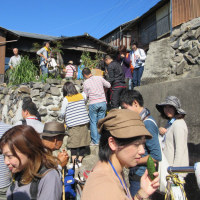 Note that if you’re a regular reader of the blog – and even more so if you’re a regular visitor of Ogijima – you will most likely recognize a few familiar faces. Indeed, one of the interests of this type of event which doesn’t really attract tourists – that’s not the goal – is to gather Ogijima’s “community”, the word being used here with a pretty loose definition, as I mean the island’s inhabitants of course, but also all its regular visitors and friends. And as a matter of fact, on that day, most Ogijima regular and lovers were there.
The creation and strengthening of this social fabric composed of all the people who “revolve” around the island is a quite important part of the island’s revitalization in my opinion. As time goes and the more I go to Ogijima, the more I notice that the many Ogijima lovers are starting to get to know each other. The first years, we just kinda walked alongside more or less ignoring each other. Then little by little, we started recognizing each other. Recently – I’d say since the second half of last year’s Setouchi Triennale – people started getting to know each other little by little, and friendships even started to form (the timing may be different for other people, but that’s my perception of the thing).
I think that this networking is extremely important to create strong bases for the next steps of the island’s revitalization, the community has to go beyond the aging local population (who, of course, remains at its center). I could be wrong as I’m less familiar with the other islands, but I have the feeling that this community of non-residents is quite unique to Ogijima, and that’s one of the reasons the island has become more and more dynamic and alive in recent years.

And before going into the heart of the subject (i.e. the music) here is a small tidbit for you; as my parents were visiting and as I stole a few of their pictures, if you pay close attention, you’ll see me in a few of them. It’s a pretty rare occurrence to be able to see me while I’m “working” on a future blog post (or more accurately; when I’m visiting an island).

And now, we’re meeting our musicians a few dozens of minutes later in a very familiar place; Onba Factory: 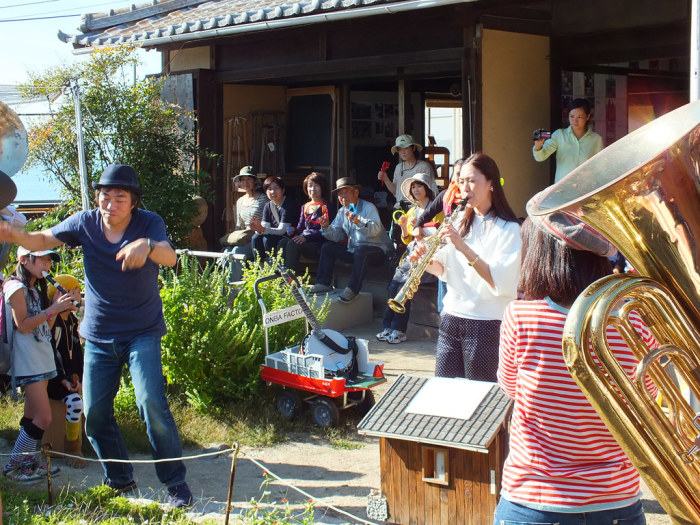 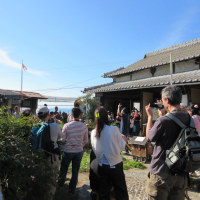 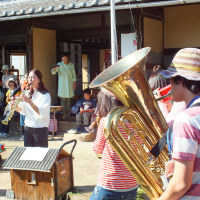 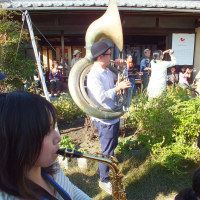 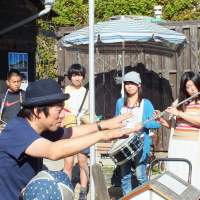 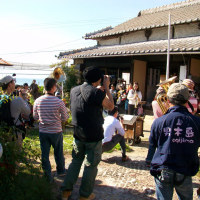 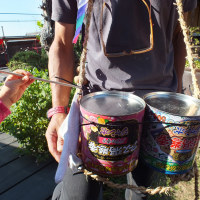 And after Onba Factory, everyone and more headed to Ogijima’s school gymnasium (that I entered for the first time, yes, believe it or not, there are still a few places that I haven’t been to on Ogijima) where the final part of the event was going to take place in the form of the more or less traditional concert.
Rather “less” actually. As you can see it from the way the “stage” was set up, there wasn’t really any stage at all. The fact that the seats were all in concentric circles erased the very concept of stage, as well as the usual division between performers and audience members. Sure old habits and shyness die hard and non-performers had a “natural” tendency of sitting away from the performers at first, but as the concert unfolded, the limit became more and more blurred.
The concert in the gymnasium started with a beautiful guitar solo by Mr. Otomo which kinda reminded me of one of my favorite bands – Explosions in the Sky (and specifically the Friday Night Lights soundtracks – both from the movie and the TV show – and by the way, even if they have nothing to do with Japan, I warmly advise you to watch both, especially the TV show). 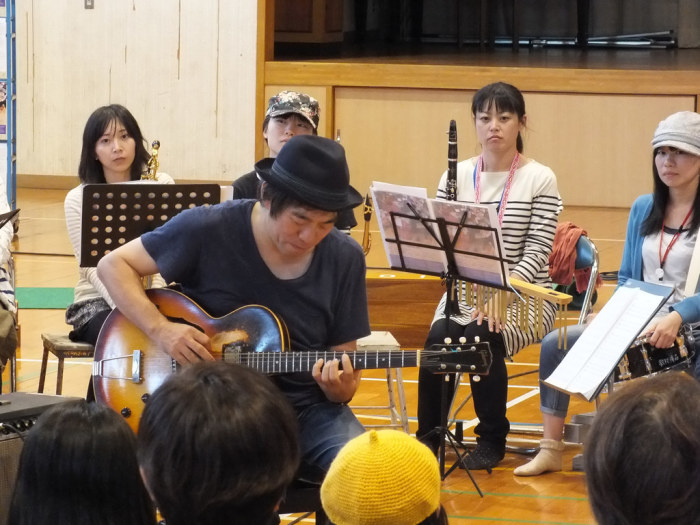 Actually, I advise you to listen to Yoshihide Otomo‘s various works and styles on Youtube (or anywhere else) the range of different kinds of music he’s able to perform, from the most avant-garde bruitist things to very mainstream tunes like Amachan‘s theme: 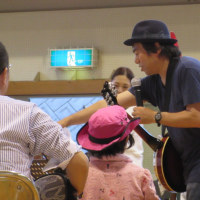 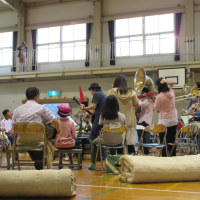 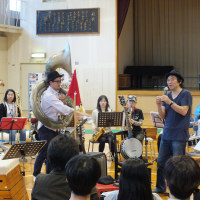 And as the Koebi-tai fanfare was part of the project, they also performed their signature theme: 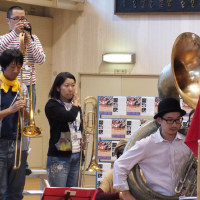 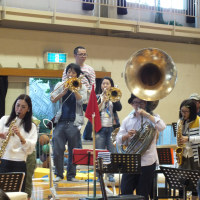 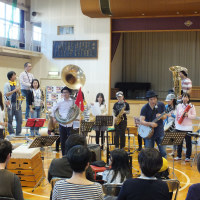 Apart from that, I told you that Otomo worked with improvisation, didn’t I?

And at times, he lets whoever feels like it become the conductor: 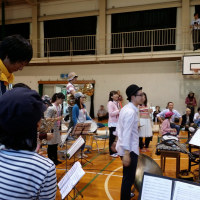 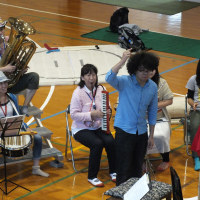 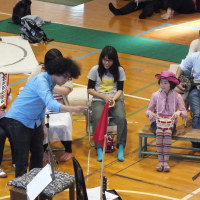 Including this very endearing old Ogijima resident, whom I had noticed a few months ago during Ogijima matsuri. 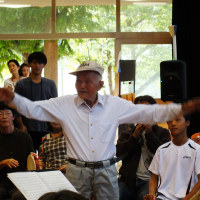 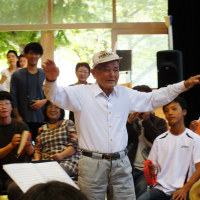 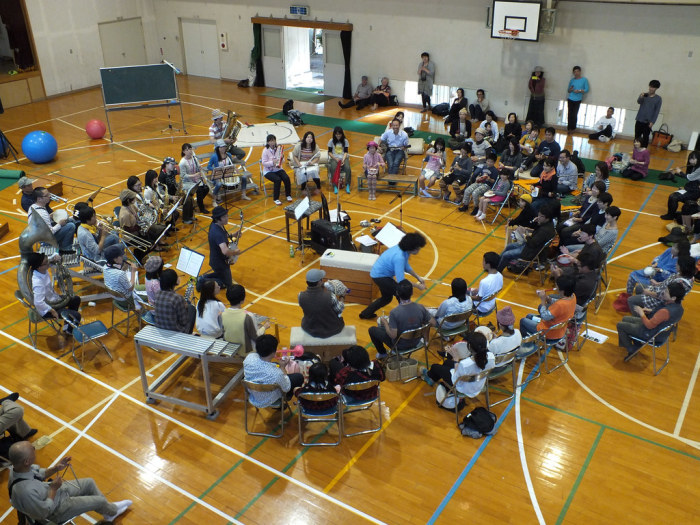 Soon, it was time to end this wonderful afternoon, but not before a “grand finale” that included almost everyone:

And then, it was the traditional goodbyes at the port: 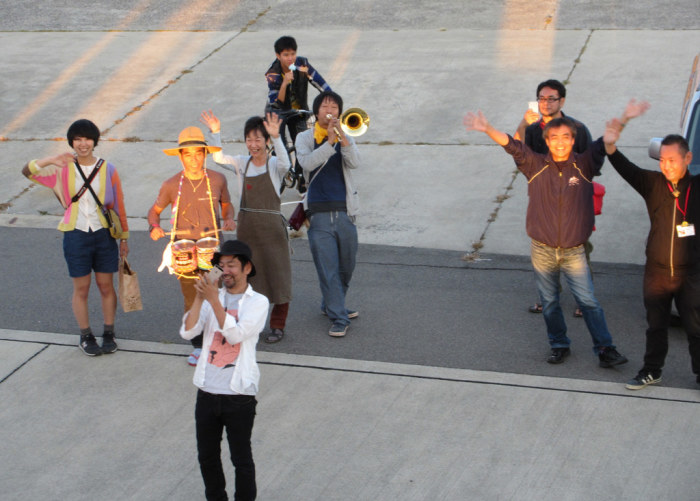 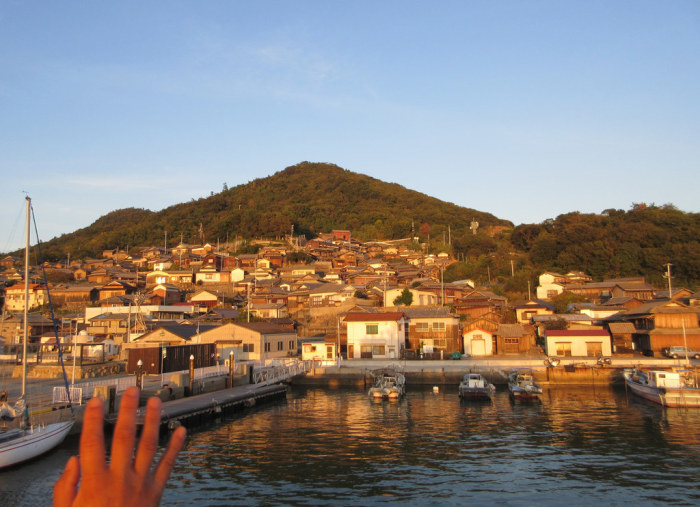 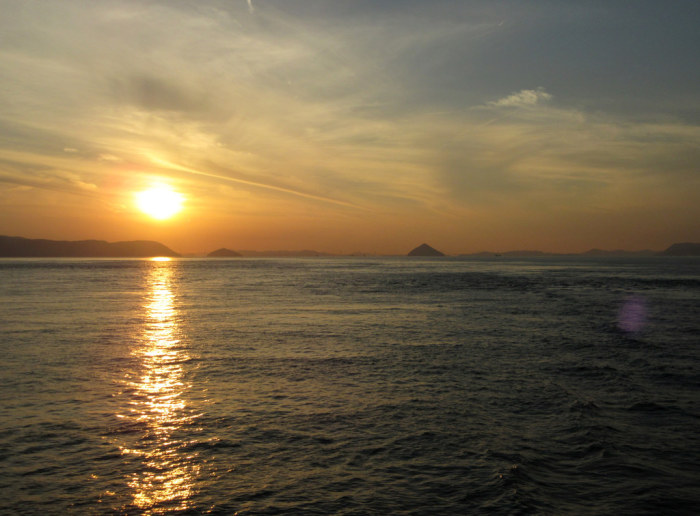