Of Shima Kitchen, Teshima Art Museum and a big blunder…

A couple of weeks ago, I committed quite a big blunder, the kind I’ll make only every few years, possibly even no more than once a decade or so.

A couple of weeks ago, I finally met Ryo Abe, and…

Well, let me give you some context first…
Two of my favorite artworks from Art Setouchi happen to have debuted roughly at the same time and happen to be located pretty much next to each other. I’m talking about Shima Kitchen and Teshima Art Museum, both located in the village of Karato, on the island of Teshima. 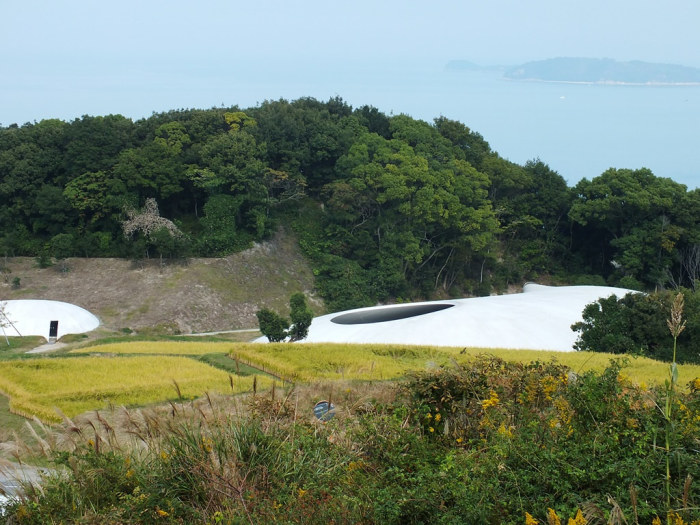 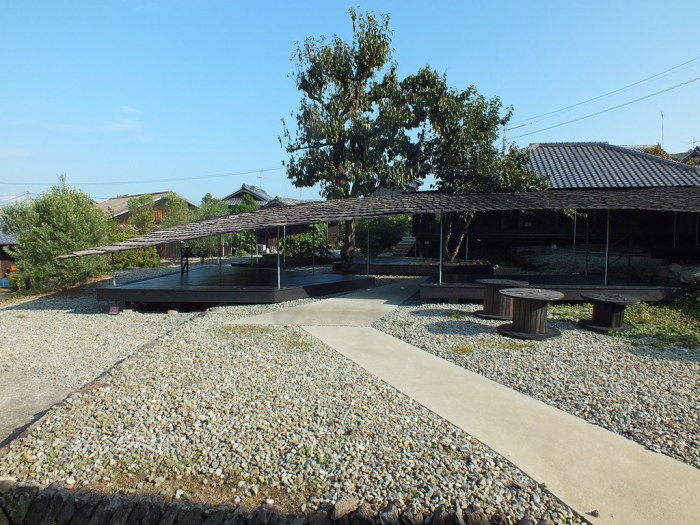 I rarely see or visit one without visiting or seeing the other. Even 10 days ago, when I was on Teshima for the Karato matsuri and despite both of them being closed on that day (being a Tuesday), I still paid a visit to both. While I obviously couldn’t enter, it was a good opportunity to take pictures without having anyone else around (most the pictures you’ll find in this post are from that day).

While both artworks are buildings, they’re very different from each other, and yet, in my mind, they somewhat go together – and not only because of their relative proximity.
The thing is that even if this is a coincidence (Is it really? It seems like it, but who knows?), I really think that they complement each other, almost like some sort of yin and yang.

First, the most obvious things: one is white, very white, and the other is pretty dark. Their overall shapes too; one is quite geometrical (seen from above, Shima Kitchen almost seems like a square with a circle cut out from its center) and the other one has a very organic looking shape.
However, Shima Kitchen does have a very organic feel, Teshima Art Museum feels somewhat “mathematical”. What I mean by that is even though it’s not as simple and dichotomous as it first seems, Teshima Art Museum couldn’t have been built just from a few hand drawn blueprints, a lot of geometric calculations (not sure of the exact expression, I’m quite a novice in terms of architecture) must have come into play to build such an unusual building. And on the other hand, despite its very geometrical appearance, Shima Kitchen almost feels as if it had grown naturally, or at least, had been set up in a very natural and “uncalculated” fashion. 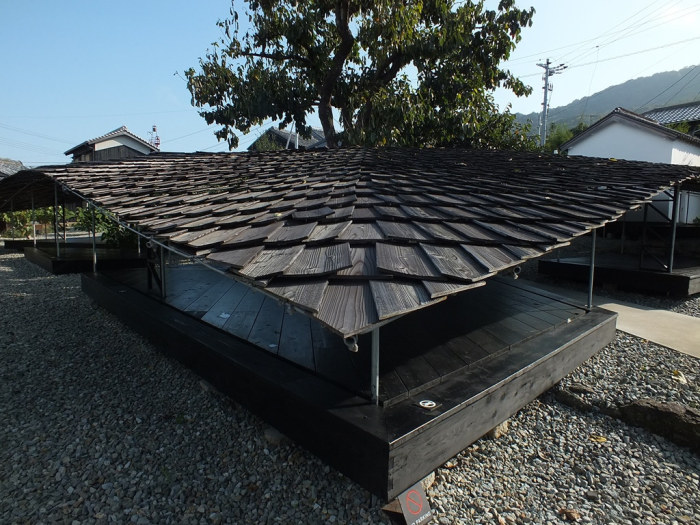 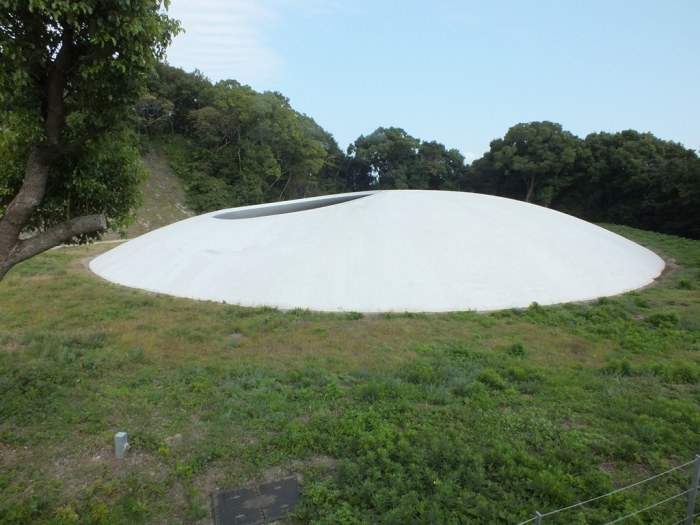 The materials used for the buildings help underlining that. Teshima Art Museum is made of concrete, with nothing but air and water inside, and the few pieces of furniture around it are metal. Shima Kitchen is made of wood, trees grow within its space. And yet, nature in and around Teshima Art Museum is actually part of the artwork and of the museum itself; the fact that Shima Kitchen was well thought out and didn’t just happen never escapes us either, the apparent beams and scaffoldings supporting the canopy help us making sure we keep that in mind. 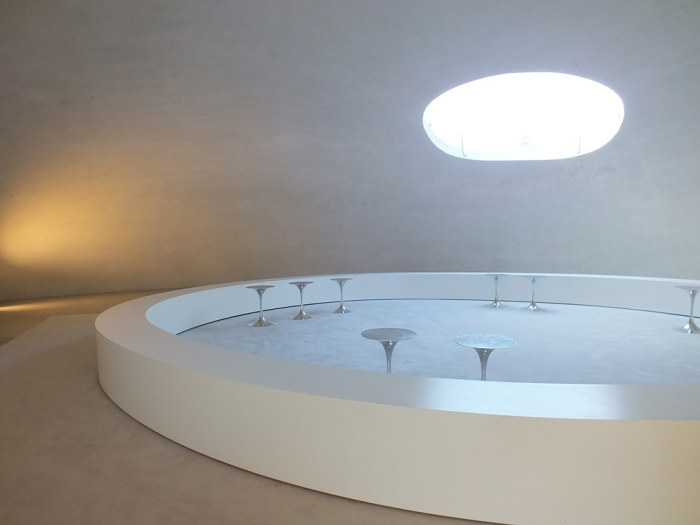 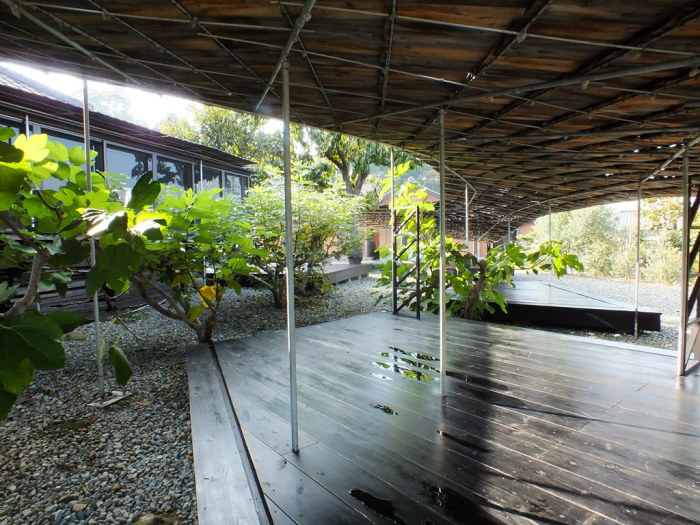 Still, despite all the parallels that can be drawn between the two buildings, major differences lay in their very cores.
Teshima Art Museum is a pure work of art, in a refined style that nears abstraction.
Shima Kitchen is also a wonderful work of art, but it’s more than that. It’s also functional; it is a place of life, of community. It is a restaurant and an event space (a concert just finished there as I’m typing these lines). By the way, it should be noted that Teshima Art Museum is a little outside the village, while Shima Kitchen is located in its heart. 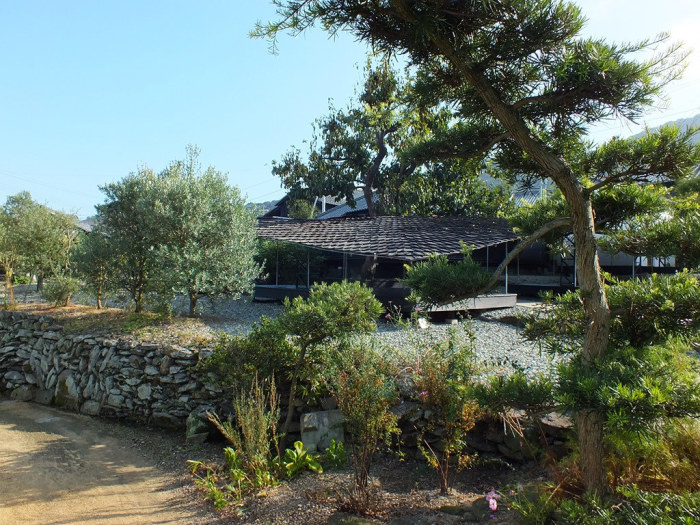 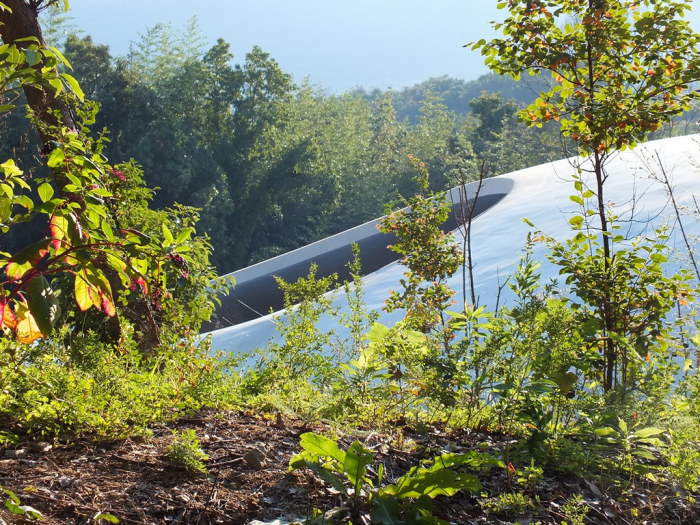 They’re both meant to be experienced more than simply seen, but in very different ways. They’re both a feast for the senses, however I’d say that Teshima Art Museum is a very personal and introvert experience. It triggers silent awe, introspection even. Shima Kitchen is a shared experience by definition; even if you go there alone, you’ll eat local food, grown, caught and prepared by several people, you’ll listen to music played by other people, surrounded by other people. What makes Shima Kitchen so special is its people (and its food) as much as the building itself.
I love both places equally. However, while I love Teshima Art Museum for what it looks like, for the sensory experience that it is, I love Shima Kitchen – for that too – but also for what it means, for what it brings to its visitors as well as to the local population. 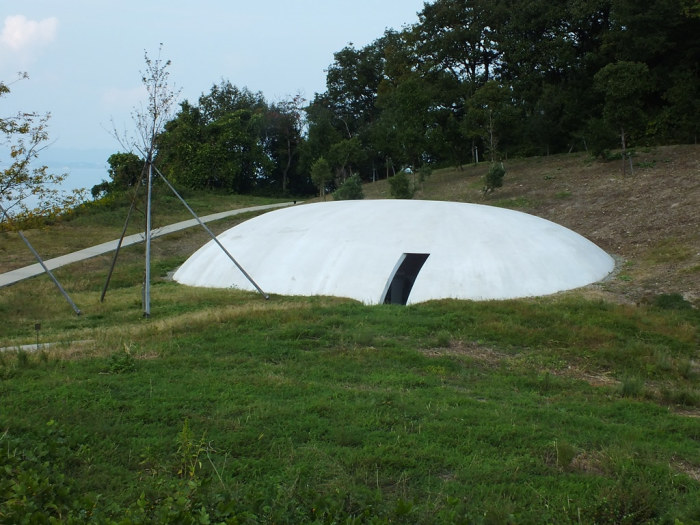 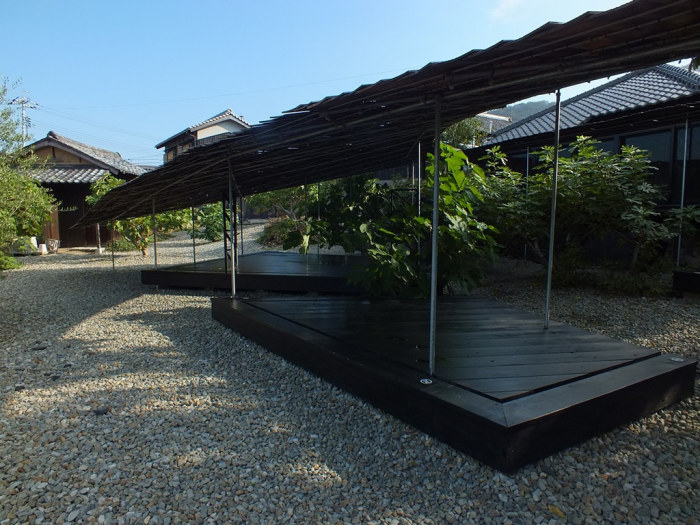 Back to Ryo Abe. If you haven’t googled him yet (or clicked on the link attached to his name on this post), know that he is the architect who designed Shima Kitchen. I’ve wanted to meet him for quite a while, not just because I like his work, but also because for the past couple of years he has become quite active among the people who are thinking of various ways to revitalize Ogijima. I especially regret missing the two small “symposiums” he organized on the island to discuss the issue and brainstorm on it. (the only reason I missed them is the language barrier, I’d have been pretty useless there)

Two Sundays ago, with his friend the composer Yoshihide Otomo, he organized a very fun workshop/event/concert on Ogijima (I’ll post a few lines and pictures about it very soon).
As soon as we arrived there, Mr. Abe came to my parents (who were visiting) and I, and spoke to us in a very friendly and welcoming fashion, as well as in perfect English. The thing is that I didn’t realize it was him until much later. When I did, I came to him to introduce myself a little more, and mentioning that I really like what he has done on Teshima, at the very worst possible moment, probably due to the excitement of the moment (it was a pretty exciting afternoon) I made a slip of the tongue and “Teshima Art Museum” came out instead of “Shima Kitchen”!

As you can imagine, and despite the fact that he took it with a smile, he was a little miffed by the thing. Who wouldn’t?

So here I am, still feeling stupid about it two weeks later, hoping that he won’t think I’m an idiot the next time we meet, because I do hope there will be a next time.

And yeah, I not-so-secretly do hope that he reads this post to understand why I made that blunder.

And as far as you other beloved readers are concerned, I hope this post makes you want to hop on the next ferry to Teshima in order to experience those two wonderful works of art that Shima Kitchen and Teshima Art Museum are. 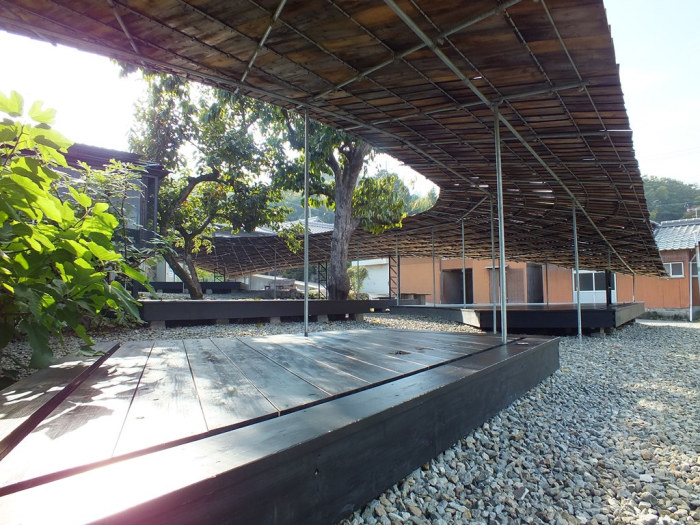 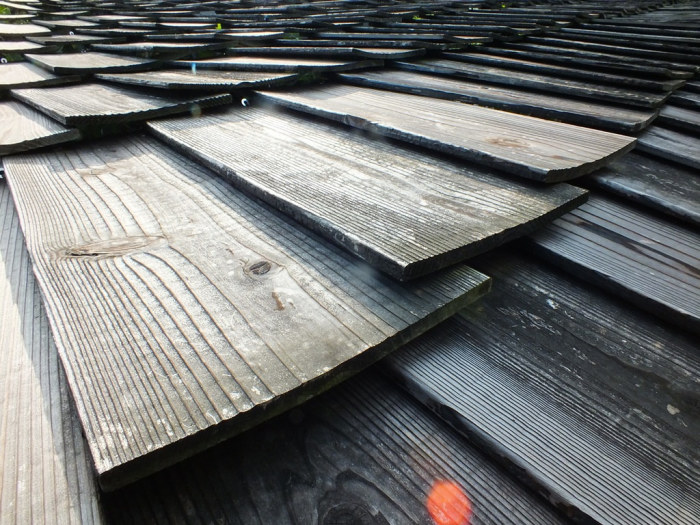