Somewhat rare, because it only occurs every other year. Another consequence of depopulation. Less people to organize it, less budget, less everything… As the situation is similar on Megijima, both islands have decided to “join forces” and alternate their local matsuri. It’s on Ogijima on even-numbered years, and on Megijima on odd-numbered years. I told you about the Megijima Matsuri last year, and this year I finally attended the Ogijima Matsuri (I had stupidly missed it two years ago and before that, I didn’t leave in Takamatsu yet and wasn’t in the area in August).

The Matsuri usually takes place over a two-day period. It starts on Saturday night at Kamo-jinja, the shrine that’s a little away from the village. This part of the matsuri must be quite intimate, as it takes place after the last ferry has departed for Takamatsu. On Sunday morning, the matsuri moves to Toyotama-hime-jinja, the shrine on top of the village that you have most likely seen if you’ve ever visited Ogijima. It starts at 10am that day, but as I had got up way too early for my taste on the previous Sunday to catch the 8am ferry, I wasn’t in the mood to do it again this Sunday, so I missed the beginning.

One of the reasons why I love Matsuri in Japan is that every single one of them is unique, and the Ogijima Matsuri is indeed very unique too. I have already shown and told you about grand matsuri, impressive matsuri, funny matsuri and more (click on the previous link to refresh your memory), on Ogijima, I discovered another type of matsuri; one that is quite intimate, somewhat emotional, earnest.

Why is it like that? Not completely sure. Most likely a combination of several factors. First the place itself; there isn’t much space in front of the Toyotama-hime shrine (nor anywhere else on the island) to allow for impressive and large demonstrations, even more so when there is a crowd gathered there. And of course, there is the situation in which the island is. Let’s not forget that four years ago, the island was slowly dying, away from the eyes and thoughts of the world (or even of nearby Takamatsu), and if things are much better now, even if we can start to be somewhat optimistic about its future, we’re not out of the woods yet, and this positive outlook about the future remains very fragile. This matsuri is an important part of the island’s history and identity, and it’s not “safe” yet. It could disappear – the fact that there are means to make it happen only every two years is a sad reminder of that fact. If it were to disappear, the island would lose a vital part of its soul. Everyone on the island is aware of that fact. I felt a similar thing, last year on Megijima, but that feeling is exacerbated on Ogijima. Megijima gets a lot of visitors in the summer and on matsuri day, you wouldn’t think that the situation is unstable. On Ogijima, only people that are close to the island attend the matsuri, no random beachgoers and such. One very telling sign: usually, when I attend a matsuri, most local elders don’t go. The event is too crowded, too loud, too “rough”, and they’ve attended it dozens of times in their younger years. On Ogijima, the elders are here, and they’re wearing their nicest clothes. They don’t go to have fun or to spend the time. They are there because it matters. They attend the matsuri with serious, almost gravity. They understand much better than we do its meaning, and they know for the older ones among them that it could be the last time that they see it.

But, if you look closely, there is something else in their eyes. There is also happiness, and hope. The fact is that the matsuri is here, it is being kept alive and the flame is being kept burning. One optimistic sign; it seems that most of the organising staff this year was composed of Ogijima’s new residents (along with some “historical” staff members I assume): the Fukui family, Tomie-chan (one day, I may tell you about them more in detail, when I know them better), probably a few I haven’t met too. As I already mentioned, hope is alive on Ogijima; for the first time in several decades, this year, the population of the island has grown (of more than 10%, there are about 15-20 new residents, something unimaginable three, even two years ago). The island is not dead yet, it may even be on the way to real recovery. The battle is not over, though.  And it probably won’t be until people change, until society change and reconsiders the way it is organized.

In any case, alive it was on this rainy Sunday, for this very simple matsuri, almost calm, not very photo-friendly (the large blue tarp wasn’t helping) and where a certain number of Ogijima residents and Ogijima lovers had been gathered: 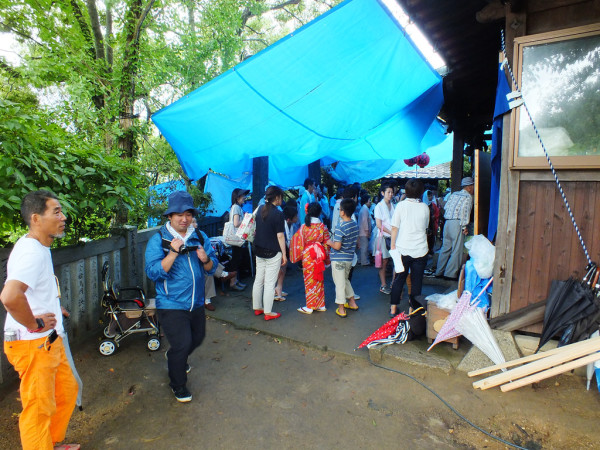 As soon as we got there, we ran into a very familiar face; Mr. Oshima was there with his wonderful orange pants (I want the same pair). That was another different thing for me, compared to the other matsuri that I have attended. I wasn’t a “random foreign tourist” there, I knew a lot of people (either quite well, or only by sight) and a lot of people knew me. 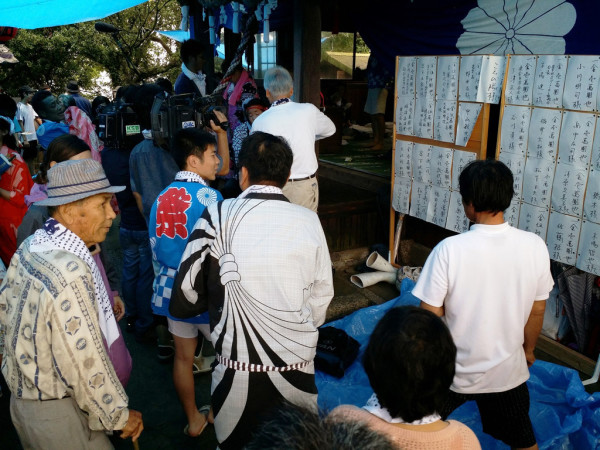 No less than three TV crews were filming the event (OHK, KSB, RSK). I saw a pretty interesting report about Mr. Fukui on one of the channels, but nothing on the two others. I must have missed them. 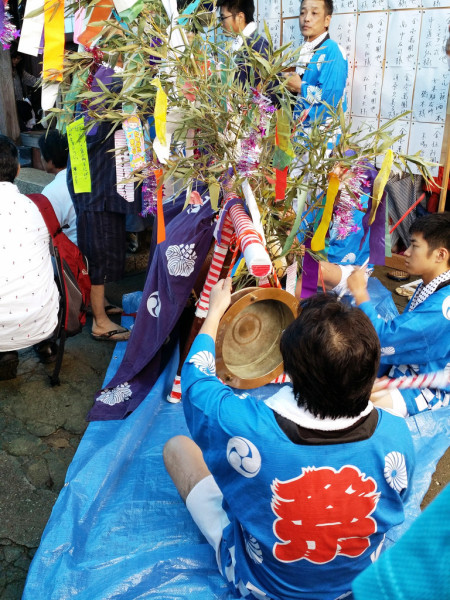 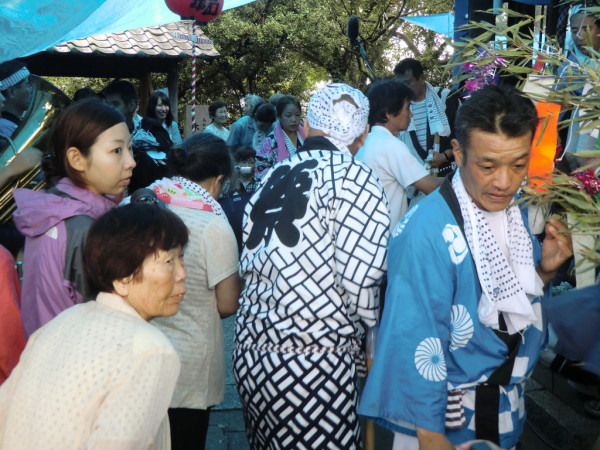 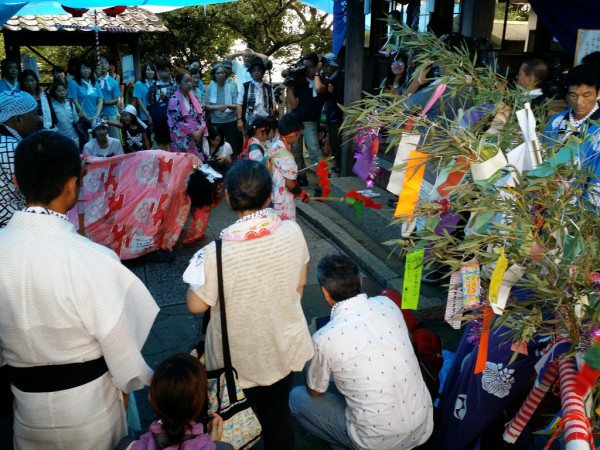 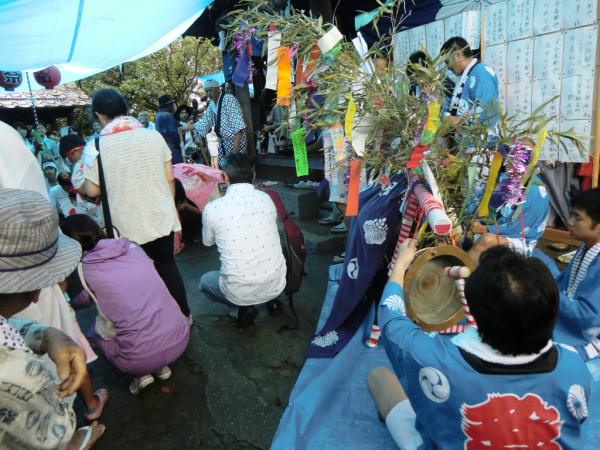 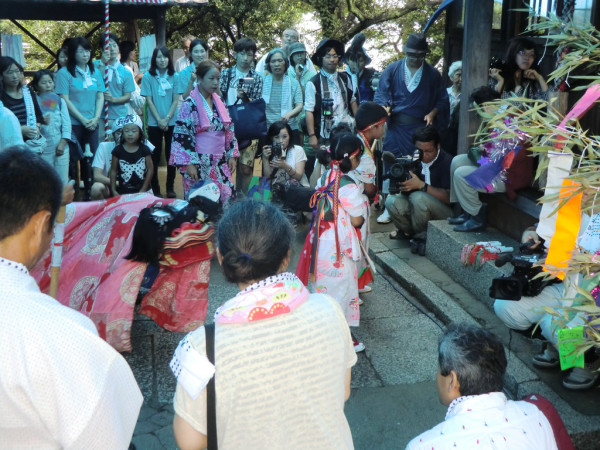 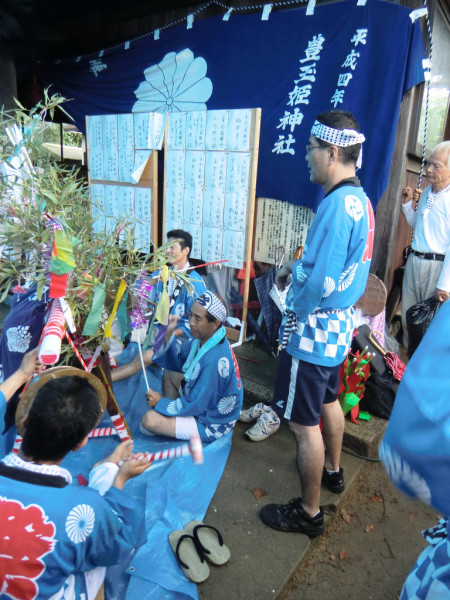 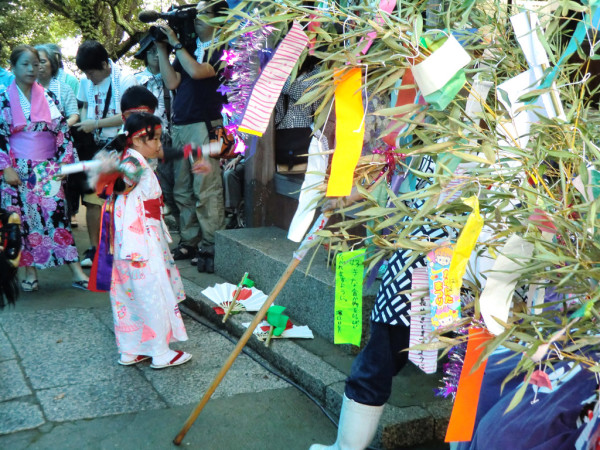 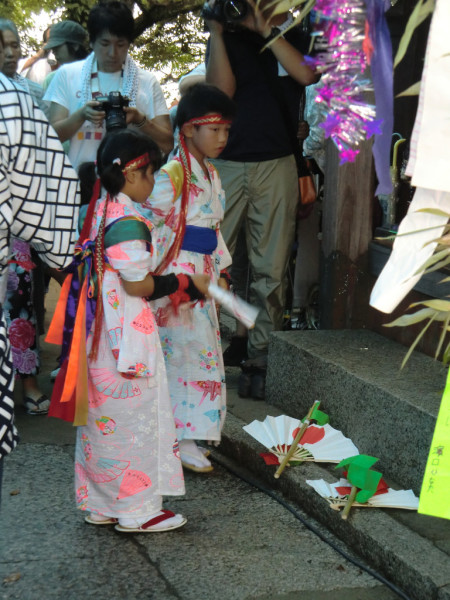 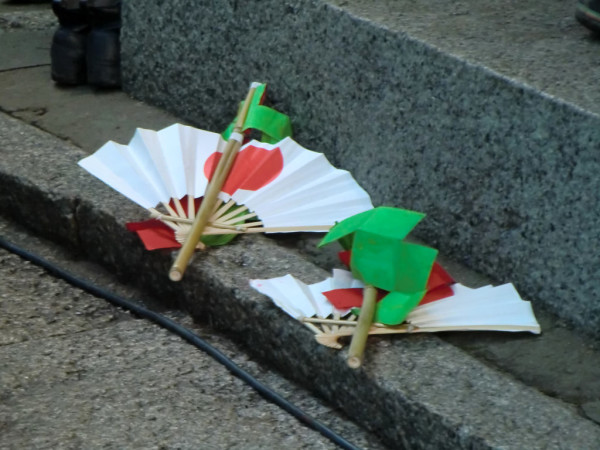 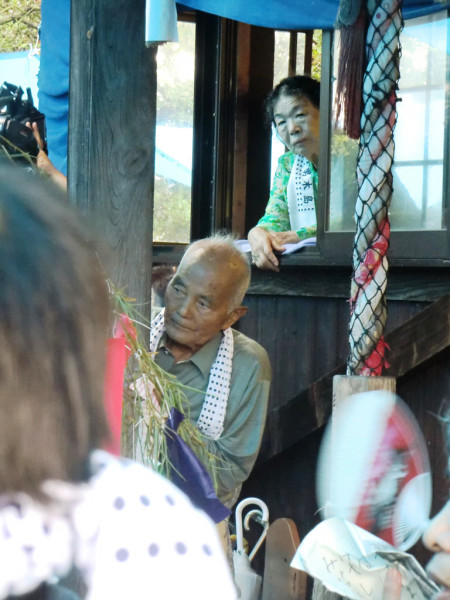 I don’t know this man, but I found him very touching for some reason. 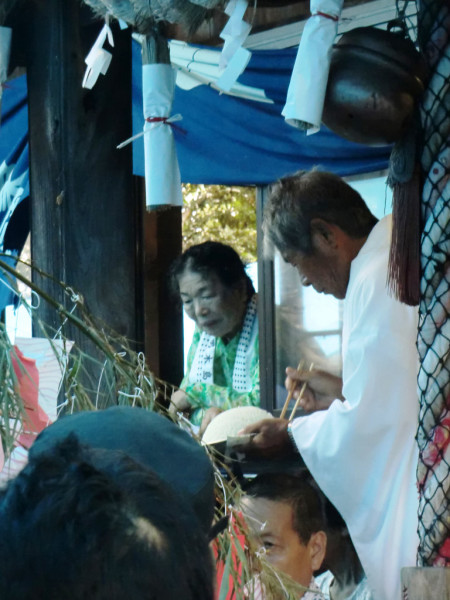 The shrine’s priest offering rice (and sake) to the attendees. 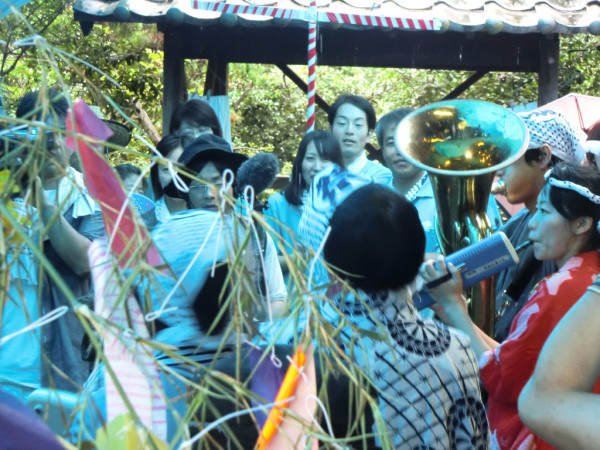 The Koebi-tai fanfare was there too. 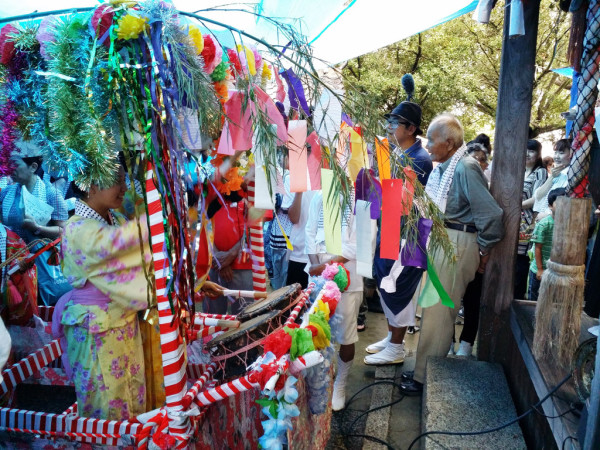 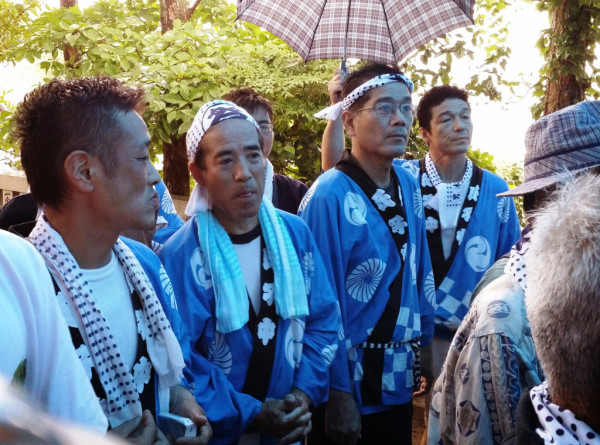 The “men choir”. Several time during the ceremony a very beautiful song was performed by the locals. Women would sing some lines, and men would sing some others. The man on the left, whom I didn’t know and who wasn’t sober (no, not everything was solemn and earnest during this matsuri) insisted that I sing with them, or at least that I chant “Ho! Yoh!” with them at some point in the song. Every time the moment approached, he called on me to remind me that the moment was approaching and that I must not forget to say “Ho! Yoh!” in the hilarious and a little ridiculous way drunk people can have at times.

I wanted to shoot more videos of the event, but the rain didn’t allow me to pull out my camcorder, so the only thing I have to show you is this poor quality film made with my phone (the same way I didn’t use my usual camera for the pictures, but my old automatic one): 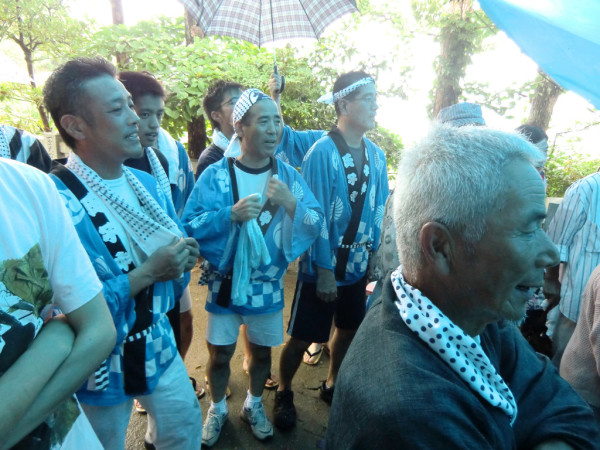 On the right, Mr. Tanigawa, to whom I indirectly owe a lot concerning my relation with Ogijima. He doesn’t know it – I don’t think he remembers our first encounter – and I think he’d feel uncomfortable if I told him. 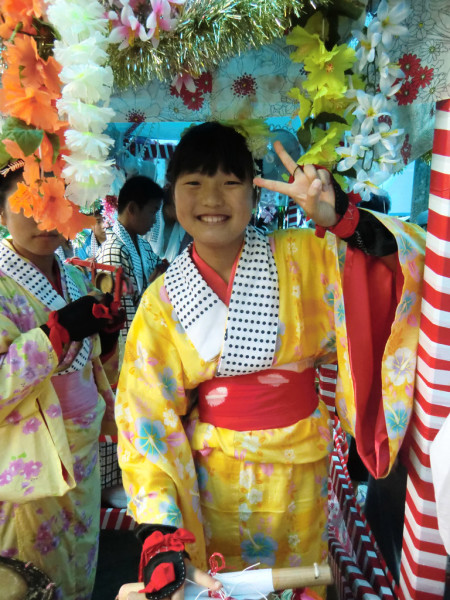 Not every member of the matsuri was an Ogijima resident. As often in the area, the youngest members live nearby, like this young girl who is not camera shy, and who lives in Takamatsu. She is the granddaughter of Ogijima residents though. 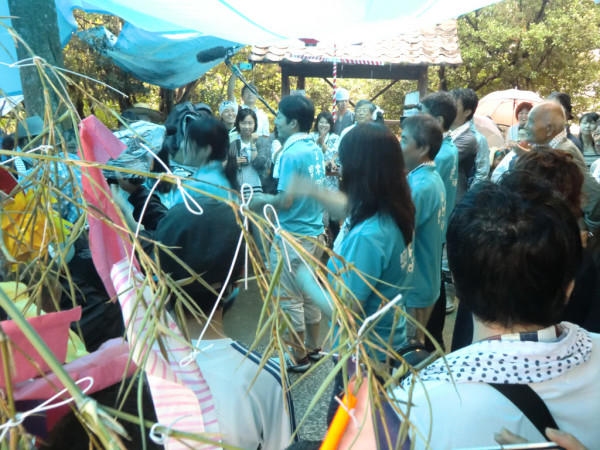 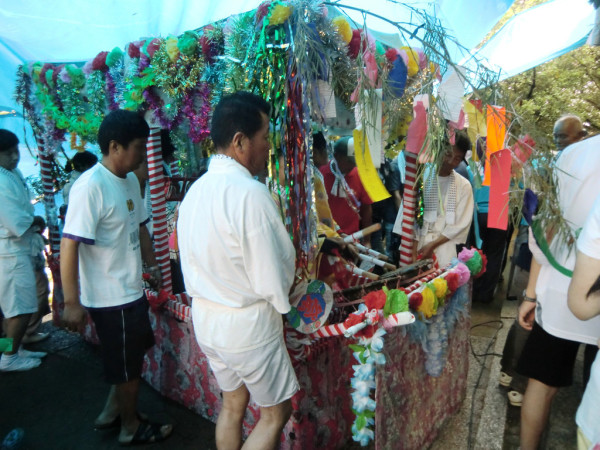 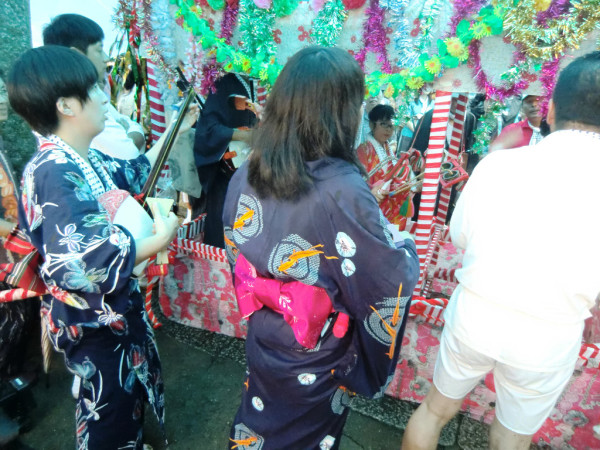 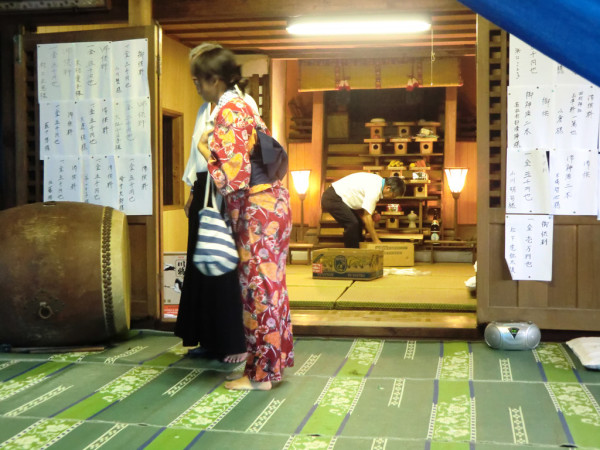 I’ve never seen the interior of the shrine so clean and so decorated,
it’s empty and dusty for most time of the year.