Well, well, well… Those are crazy times, aren’t they?

This Coronavirus pandemic puts me in a strange position with this blog (hence the lack of new posts recently). One of its goals is to make you want to come to Kagawa prefecture and visit the Setouchi islands. However, right now, the last thing I want you to do is to visit the Setouchi islands.
Not that most of you can, but you see what I mean. Add to that the unprecedented levels of stress and anxiety most of us are going through. This is not the ideal time to be blogging about light-hearted things such as art and tourism.

On the other hand, writing this blog over the years (it’s going to turn 10 years old soon, can you believe it?) has brought me great joy, has relieved me from stress more often than I’m even aware of, and I also believe that it has had a positive influence on at least some of you.

So, instead of thinking that I shouldn’t be blogging about the things that I usually blog about because they may seem a bit unbecoming given the current situation, maybe I should be blogging about them more than ever – if only to make us think about something else for a few minutes?

With that in mind, maybe I should try to write more these days (as much as the crazy situation will allow me too, we’re war from being on lockdown in Japan, and trying to navigate the situation as safely as possible requires extra-levels of work and energy – energy that I don’t always have anymore when it’d be time to blog).

Ok, enough about me and my musings, today we’re going back in time during the summer session of the Setouchi Triennale 2019 and we’re also returning to Shodoshima one more time (not the last).

For those of you keeping track, the day was August 20th and it was my 15th day visiting the Triennale (it’s also the 14th post because I mixed the chronology up a little bit).

The visit was a little special. Except for two artworks, I had already seen most of them (and already showed them to you too). I went back on that day, well, first because I have the chance to be able to do that, and also because I had visitors.

First, my friend Dru from Hinomaple – who had finally made it to the Setouchi region after a small accident forced him to cancel his original plans in the Spring.
And also my friend Vincent and his family. Vincent doesn’t have a blog, but he’s one of my best friends from college. We met 26 years ago, but we hadn’t seen each other in pretty much 10 years, as for the past 20 years we’ve had a tendency to live in different parts of the world (we still do).

I may not explain or detail the artworks much in this post because they’ve already been covered in previous posts, especially these two:

So if you have missed them, I advise you to read these first.

That morning, we took the ferry to Kusakabe Port, it’s less crowded than the Tonosho Port during the Triennale and also, it’s closer to a lot of the artworks that we were going to visit that day, starting with one of my favorite artworks of the year:

The Shore Where We Can Reach by Xiang Yang

And before you go any further you must read the two posts dedicated to him and his works:

Fun fact: When Xiang Yang offered me one of his Traveling Stools (see post above), I seriously hesitated between two. The one I ended up getting and that I greatly cherish (I basically have a part of the Triennale in my house 🙂 ), and the one pictured here. They’re almost total opposites (mine is quite unique looking, this one is probably the most plain one), but I really love both. 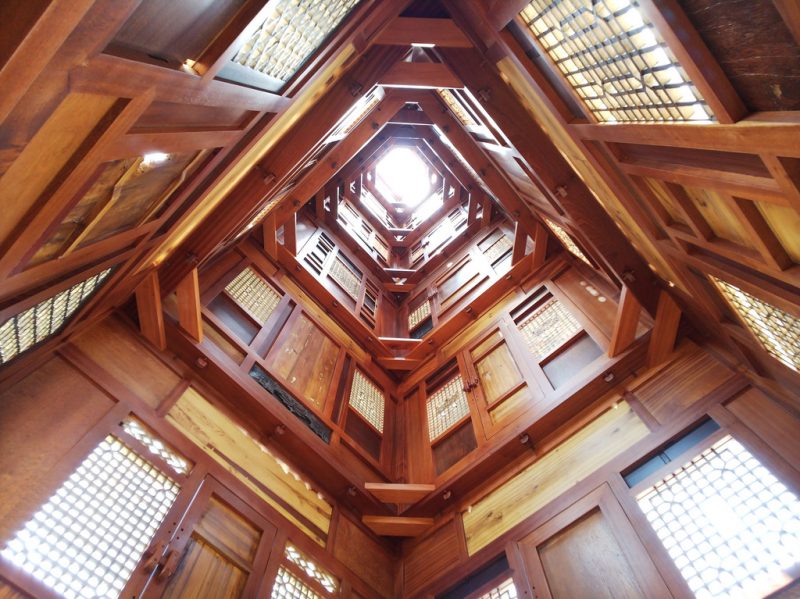 After leaving Kusakabe Port and Xiang Yang’s art (I was always sad to leave it, it’s such a magical set of creations that I could spend the day there every time) we headed to Mito Peninsula to revisit some of the art there as well as some I had missed the first time I went, in the Spring.

Garden of the Border by Mitsuharu Doi

A fake, multicultural and multi-dimensional archeological site. It was started in 2016, it grew in 2019, and as it’s a permanent artwork, I hope it will evolve a bit more for 2022.

Quartz by the Sea by Kaoru Hirano

It took me a few visits to get something out of this artwork except that… no… not really. In one room on the abandoned house were pieces of fabric torn down to threads in order to create new shapes, and it didn’t speak to me at all. It looked vaguely interesting, but that’s all I can say.

In the other room, it was a bunch of electrical cords and random objects that were installed, and I still don’t know what to think of it. Oh well.

I do like all these little tree models made of wood, as well as this strange desk “eaten out”? by vegetation. 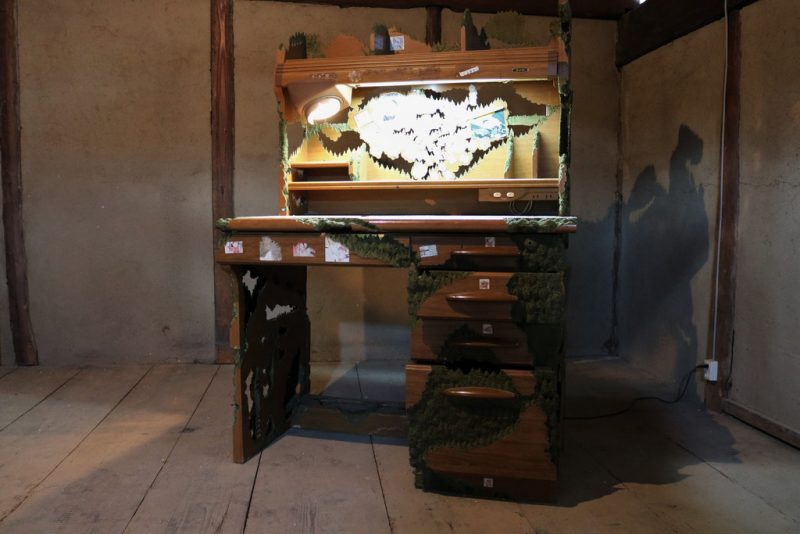 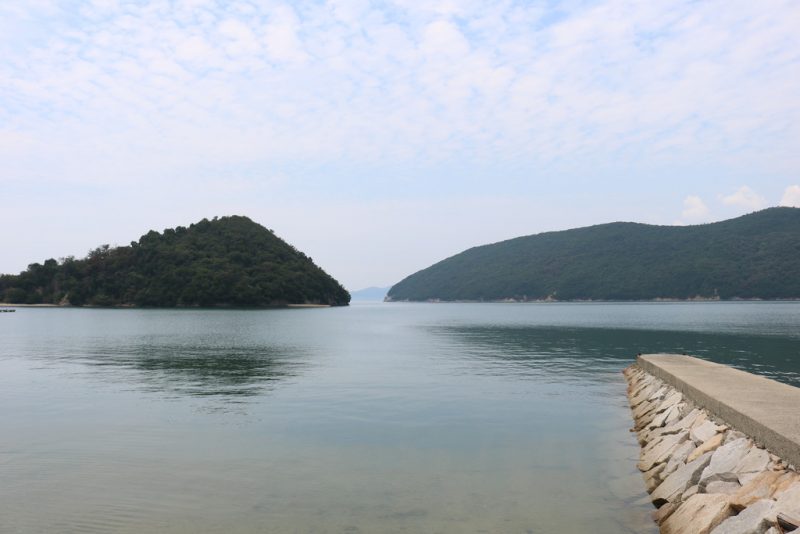 The natural harbor of Konoura is so beautiful and peaceful.

A glimpse of Tomorrow’s Sea by Mutsumi Tomosada, you can see more in one of the previous posts about Shodoshima during the Setouchi Triennale 2019.

The next artwork was a first time for me (no time to see it during the previous trip to Konoura). It was Ascend the Past and Now, Descend the Future by Yoshihiko Shikada.

On the first floor of a house near the sea, some old pictures and postcards of Shodoshima: 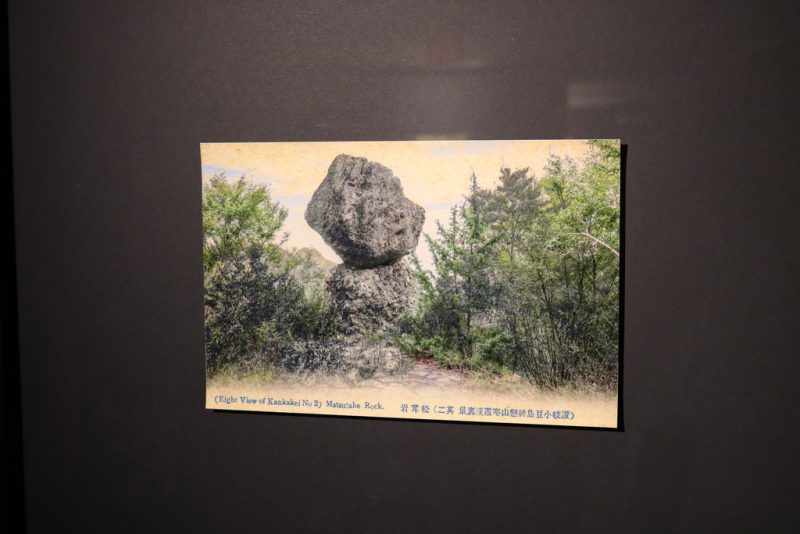 On the second floor, an empty room with a painting on the window representing… the landscape (the actual landscape that you can see if you open the window): 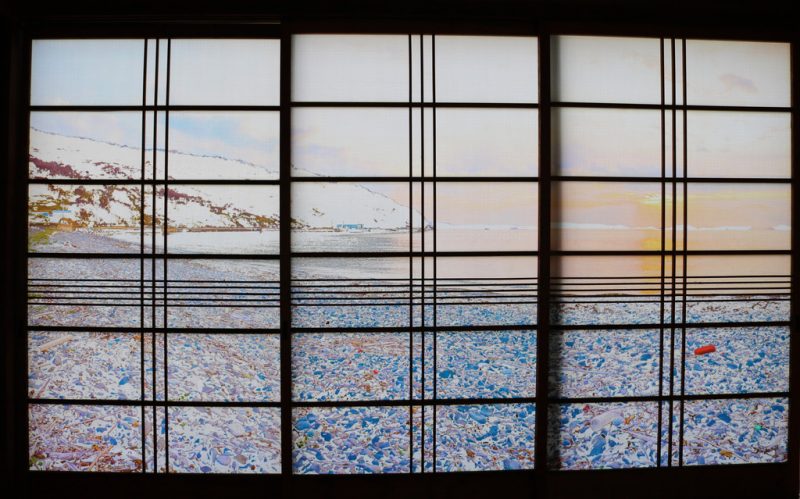 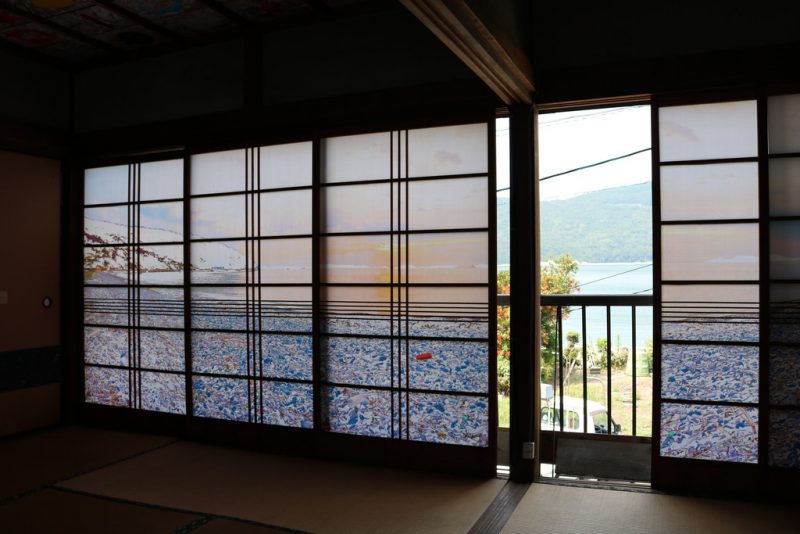 There is a twist, though. If you look closely (or at the ceiling), this is what you see:

I don’t think I need to explain, do I? You just need to go to a pristine and wild beach of the Seto Inland Sea to see that they’re not so pristine after all. 🙁 And it will only get worse as long as people keep on consuming and consuming in an unsustainable way. 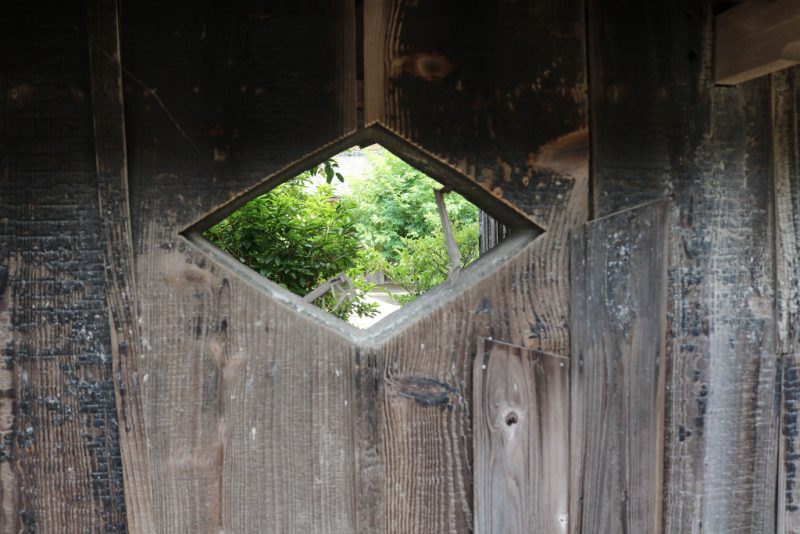 Heading back to the car, I passed James Jack‘s Sunset House, which is not part of the Triennale anymore, but that is still standing, although, I’m afraid it hasn’t been used in quite a while. 🙁

Our next stop, Shimimi-so by Toshimitsu Ito, Kana Koh, and the Hiroshima City University Faculty of Arts. 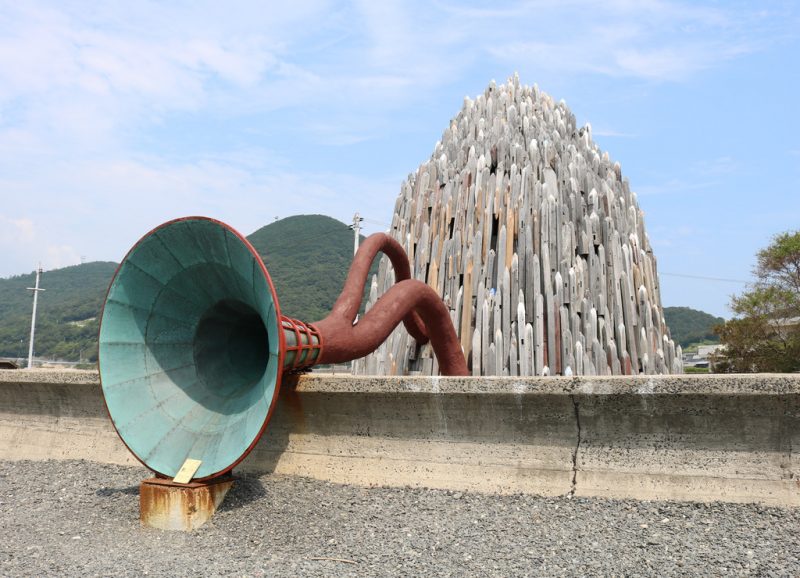 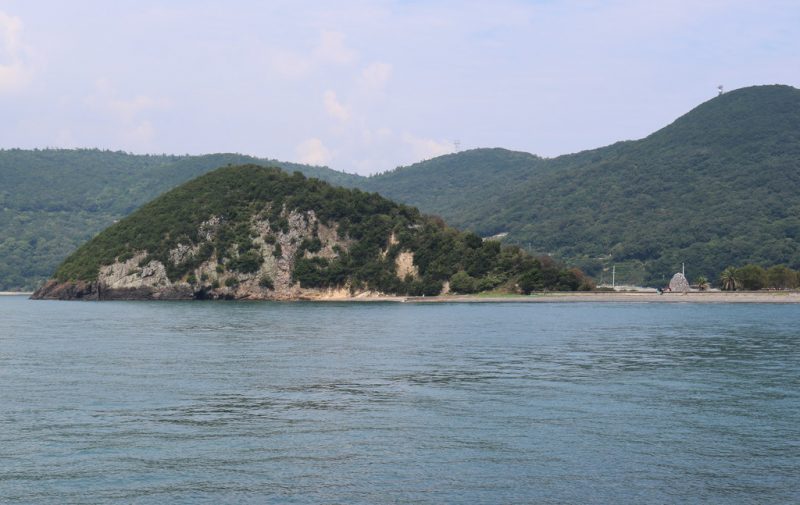 I still don’t know what to think of this artwork, but I figured out the “mystery” of the elephant shade, and I was greatly disappointed: 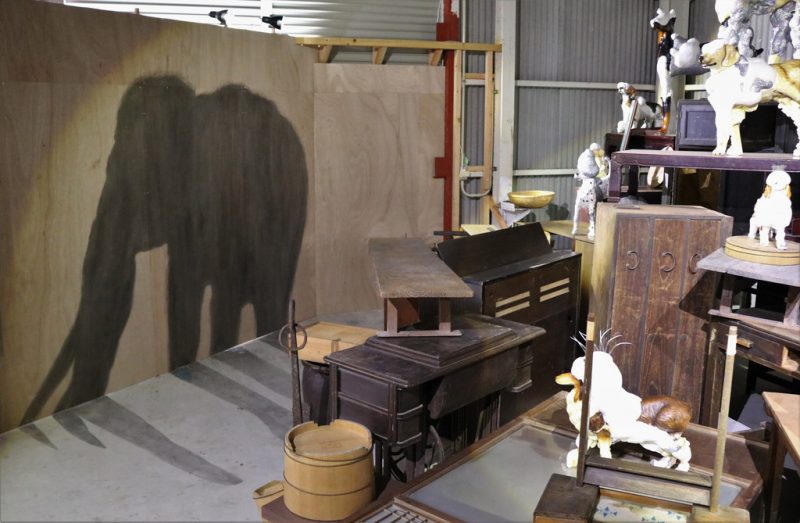 Spoiler alert: it’s no shade at all, it’s a painting
(you can see it if you look at the floor on the picture).

We also revisited Element by Jio Shimizu. I have to admit that it felt a little more out-of-place without the pouring rain outside the building. I still like it, though. 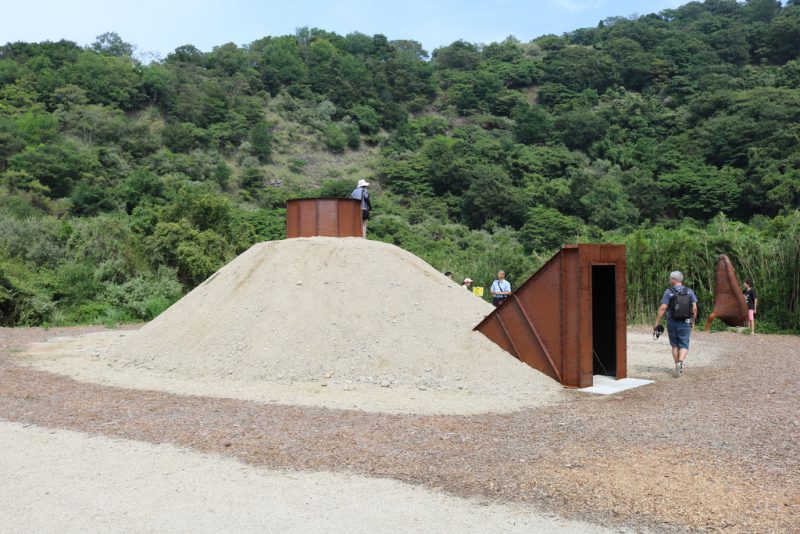 I love the idea. The result is a tiny bit disappointing though. When you’re inside the structure underground, you need to be extremely quiet as the echo is very strong otherwise. And even if you’re totally silent, sounds from the mountains are barely audible. I still like the structure, though.

I can’t imagine that the installation was dismantled, it looks pretty permanent. However, it’s not listed among the artworks that are supposed to be open for 2020 and 2021. I imagine that the place being quite isolated, it can’t be easily manned, and at the same time, it could be a dangerous spot if people were to visit it freely. I guess that we can expect to see it again in 2022.

Our next visit was also an artwork that I hadn’t seen before (We had to skip it my last time in the Mito Peninsula or we would have missed the ferry back home). It’s called Eyes of Nature (from the Earth) by Argentinian (but Japanese resident) artist Julio Goya.

The place could be described as some sort of giant treehouse and it was really fun and beautiful. I’m a fan of interactive artworks as you may have already figured out. 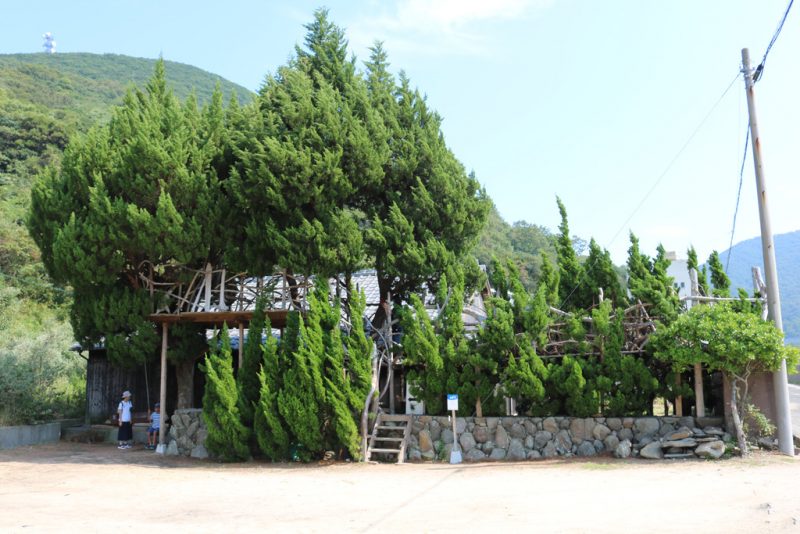 After the fact, I learned that Mr. Goya was actually one of the artists in residence in Konoura (just like James Jack, and Yume Akasaka before him). He spent most of the year on the island, he even stayed in the house next to the installation, and I’m kinda bummed that I learned that too late and couldn’t meet him. Another time maybe?

In any case, Eyes of Nature is a permanent artwork (or at least long-term) and it can be visited at any time.
As I assume it will not be maintained too regularly, it could be interesting to see how it will grow in the next months or even year (as the chance that I see it again in the near future is rather slim, hopefully in 2021).

Right after, we left Mito Peninsula and headed to the center of Shodoshima to see a favorite of mine (and of everyone, really). Wang Wen-Chich‘s fourth iteration of his giant bamboo house in the “thousand rice fields” of Nakayama. This time it was called Love in Shodoshima. 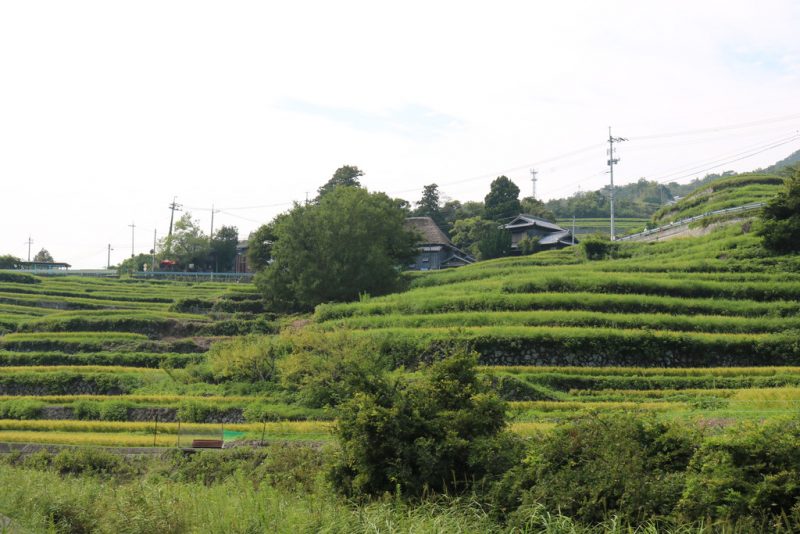 Here is a short video of the place (guest-starring Dru and Vincent’s kids): 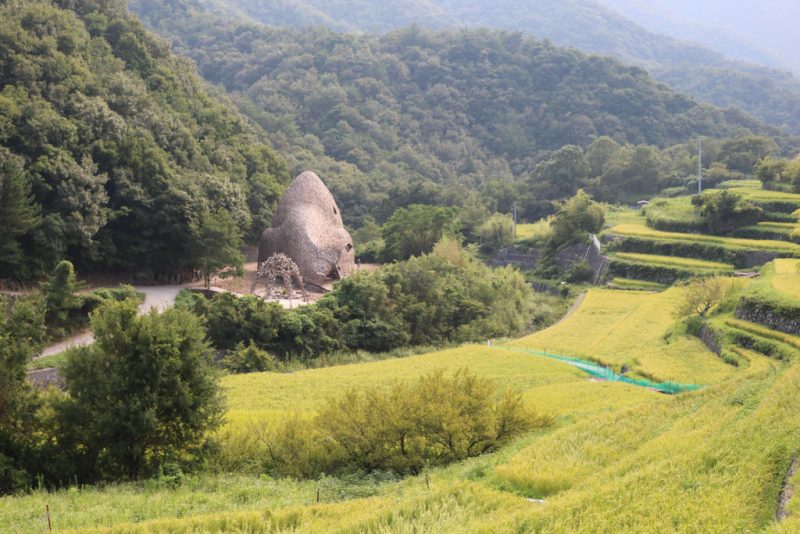 Note that while you can’t enter it anymore, Love in Shodoshima is still standing as I’m typing these lines, and it will probably do so until the next typhoon or the one after (usually, it’s dismantled about a year or so after the end of the festival, and usually after typhoon season).

We had one last stop to head to, it was a bit far from all the rest, but there was no way we could miss it. You probably have guessed that I’m talking about Lin Shuen-long‘s Beyond the Border – Wave located on the north coast of the island, on the village of Obe.

If you want to know more about the Beyond the Border series and Lin Shuen-long, may I advise you this interview: 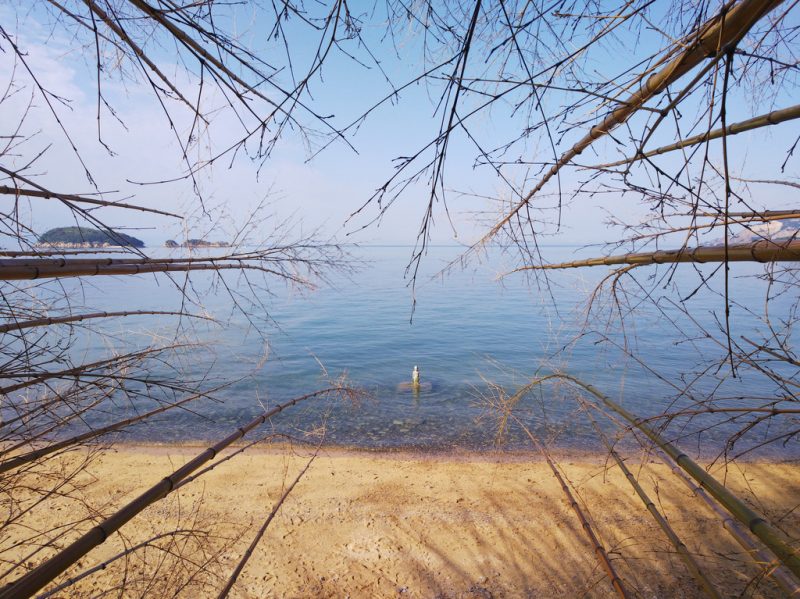 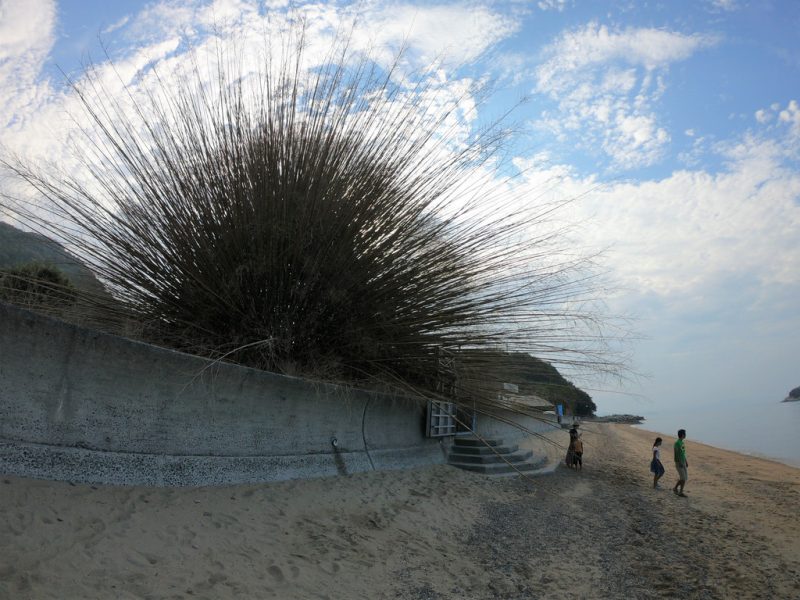 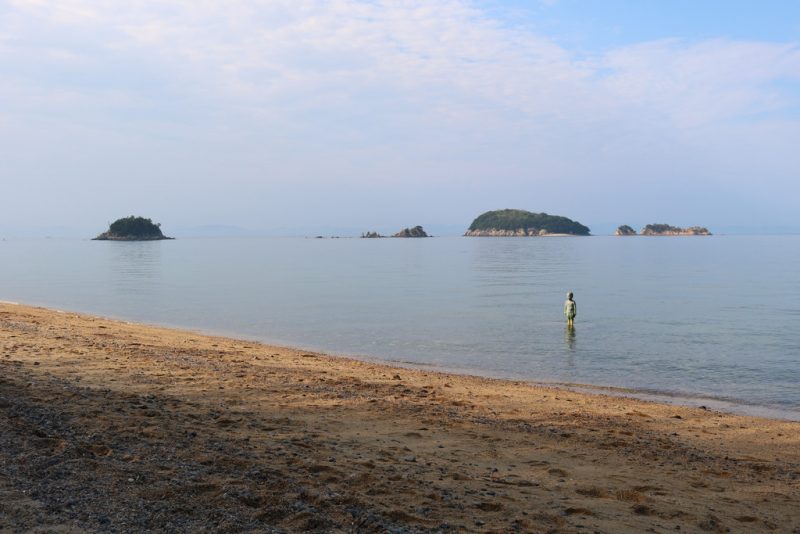 After this always wonderful experience, it was time to return to the port if we didn’t want to miss our ferry back to Takamatsu. That meant crossing the island through some of its highest elevations. In other words, shortly after the being at the sea, we were in the mountains:

The famous Kankakei Gorge that I really need to visit in the Fall one day (I’m a bit embarrassed to tell it publicly, but I’ve never been there in the Fall, or at least, not when the leaves are red and it becomes the most beautiful spot in the region).

Then, we had to rush to Ikeda Port, and managed the catch the ferry a few minutes before it was time to board.

Yashima and its tip.

I hope this post managed to change your mind a little bit, away from the concern and worries that are all crippling us at the moment.

And, if you liked what you saw and want to subscribe and/or thank me for my work, please click on the logo below and you’ll know all the details. Thanks in advance.