That’s it. The Spring session of the Setouchi Triennale 2013 has ended yesterday.

I don’t have any official feedback about number of visitors and such, I’ll give them to you as soon as I get them, but overall it seems that everyone was very happy.

Myself included as, after visiting seven islands: Ogijima (twice), Naoshima, Megijima, Shōdoshima (on a two-day trip), Inujima (for the first time, finally!), Ōshima (for the first time in three years) and Shamijima – and only a brief one hour stop on Teshima unfortunately 🙁 – and if I am to believe my Art Passport about sixty artworks seen, visited, experienced (I must have forgotten to stamp a few pieces in public access), I can say that it was an experience as amazing as the first time, back in 2010.

It was a pretty different experience though, the wonderment of the discovery during my first time is gone (back then it was my first visit to most of the islands and when I really fell in love with them), but it has been replaced by a more serene and subtle appreciation, almost as a “connoisseur” if not of the art, at least of most of the amazing locations. Living here now being a definite plus, obviously.

I was also better prepared for the crowds (me and the organizers), although they were not that bad this time around (back in 2010, I attended the festival almost at the end, when the islands saw about 500,000 visitors in one month), but I know that the crowds will indeed come for the next two sessions, the Spring only being some sort of appetizers. But even this time some days were crowded. I know for example that there was about 400 visitors to the Onba Factory on Sunday 13th and I assume it was the same if not more yesterday (I caught a glimpse of Meon, it was full, and both Meons were being used).

Not sure yet how the split of the Triennale into three seasonal sessions will impact the crowds though.

Talking about this three sessions thing, I must admit that at first I was unsure whether it was a good idea or not. Now, I am convinced. The strain on the islands and the islanders is definitely not as strong (I can’t really imagine this influx of visitors, growing every week for three months without a break as it happened in 2010). Yet, at the same time, it gives the feeling that the Triennale lasts pretty much all year long. And we’ll get to experience the excitement of the preparation and the opening days two more times which is pretty great (even if I’m not exactly concretely involved in the preparations, just doing my “preview trips” and interviews (more are coming by the way). Of course, there is also the opportunity to experience the islands and the art at different times of the year, which is an amazing opportunity for those of us who have the chance to attend the Triennale several times.

It’s a good for this blog too as I can tell you about artworks as a (p)review of art you can still experience (the last time my posts were more of a retrospective than anything else), and hopefully will.

And as it’s now time to finish this post, let’s do it with a few pictures of the departure of yesterday’s last ferry from Naoshima to Takamatsu and it’s famous (are they?) ribbons that symbolize the closing of the festival: 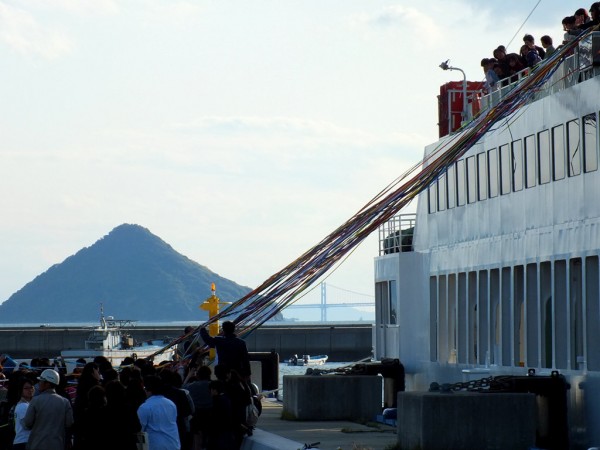 Saying goodbye in the port of Miyanoura, with Ōzuchishima in the background. 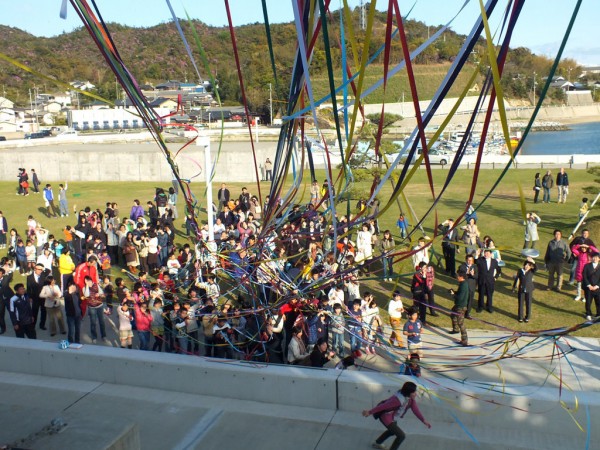 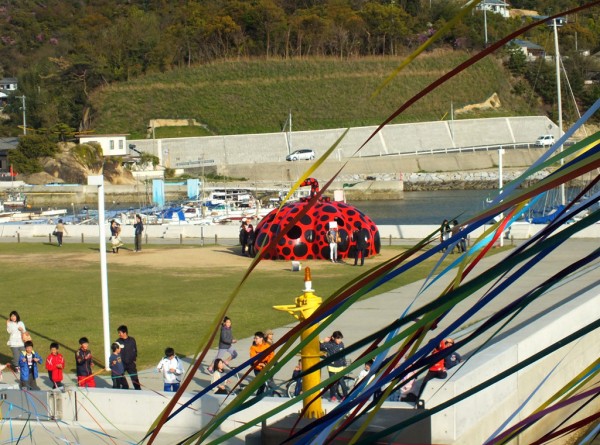 A quick glimpse at Yayoi Kusama’s Red Pumpkin on the way.

Very soon on this blog (maybe as soon as later today or tomorrow?) and on July 20th for the start of the Summer session.

2 thoughts on “Setouchi Triennale 2013 – End of the Spring Session”

previousThe End of Cherry Blossoms
next263,014