Strange artwork this Mukaijima Project – “Make Island From Island” (向島プロジェクト「島から島を作る」). I like the idea. I’m less sure about the result.

The idea was to create an artificial island (a floating and anchored one) between Naoshima and Mukaijima (one of the tiny islands surrounding Naoshima, only 500 ft away). It was made from driftwood, styrofoam and other objects and garbage that were found on Mukaijima beaches (and other islands I assume, I doubt there was enough trash just on this tiny island to create an artificial one from it).

I like this idea, which reminds me of Black Porgy, make art and cleaning the environment at the same time. 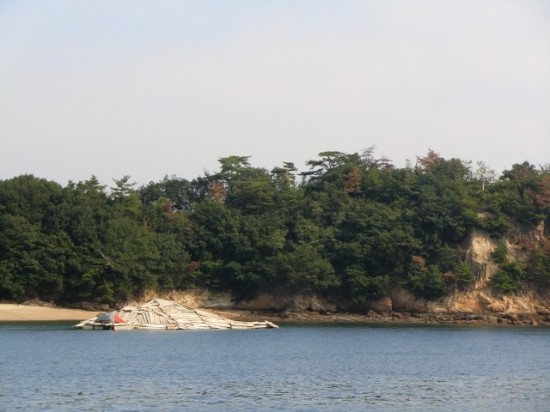 However, I have to admit that I was a little less excited by the result. Mostly because, from a viewer’s perspective it could be summarized as “a stack of floating wood a few hundreds feet away”.

Now, to be honest, I’m sure that there was more than just that in the project.

The artist, Tadashi Kawamata, has a house on the island (an island that has only about 20 inhabitants) that he uses to welcome art students to take part in various workshops. He also lives in France and French people know his works (even if they don’t always know him), maybe you too if you were near Pompidou Center in Paris during last Spring. He also currently has an exhibit in Chaumont-sur-Loire until november (and I warmly advise you to go to Chaumont-sur-Loire if you’re visiting the Loire castles, as it’s another great place where history meets contemporary art). 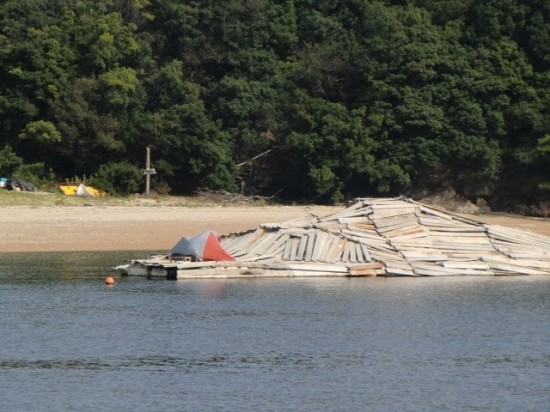