After pretty much not going to the islands for more than a year (because of you know what), I have gone quite a few times this Fall. We don’t know what’s going to happen next, so the current good weather and low Covid numbers were a sign that I needed to go as much as possible right now.

After Ogijima last week (I just went with a friend and to see friends, so no pictures) and Naoshima a bit earlier (pictures and videos coming soon), today was Shodoshima.

I can’t believe that I hadn’t been to Shodoshima in two years and it probably would have been even longer if I hadn’t received an invitation for a very special mini-tour of the island.

A few days ago, I received a message from a friend at Koebi-tai (the volunteer organization managing a bunch of things for the Setouchi Triennale) inviting me to a guided tour of the island. It was a tour with a twist. The guides were local high school students who are learning/practicing being guides to their island, and some of them even do it in English. Of course, to practice guiding you need guests to be guided. This is the role a few people and I took today.

We just saw a few places, but it was overall quite fun, and I fully approve of such local initiatives. The students really did an amazing job.

Can you imagine yourself, age 16-17, guiding a bunch of adults (who know the island as well as you do for the most part) and doing parts of it in a foreign language? Me neither.

So, yes, I’m not sure they’ll ever read these lines, but if they do: “You kicked ass today! Congratulations!”

Also, I took a few pictures.

We started at Tonosho Port, and lo and behold, I could finally see one of the very few (three? I think) artworks from the Setouchi Triennale 2019 that I had missed on Shodoshima.

It’s again… (that’s the name of the artwork) by Kim Kyoung-Min. 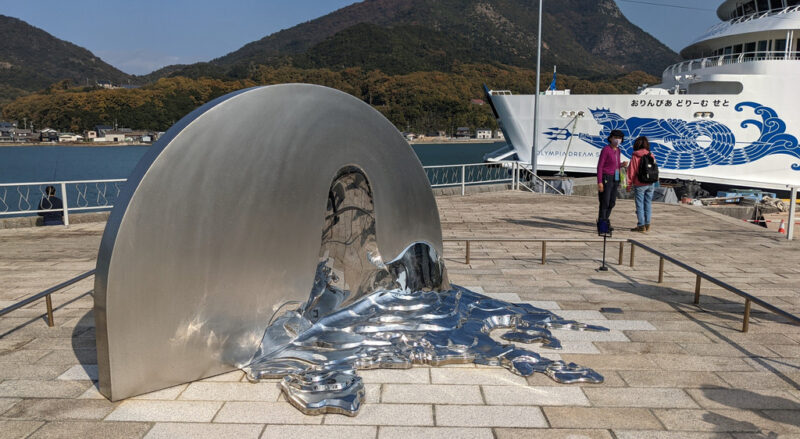 OK, I’m not gonna lie, I’m not exactly blown away by it. However, finally seeing it, I could get what it actually was. A homage to Shodoshima. If you pay attention, you’ll see that the part that has melted actually forms the shape of the island on the floor (island’s elevations included), and on the semi-circle itself, the shape of the missing metal kinda represents a mountain. It even resembles its kanji: 山. 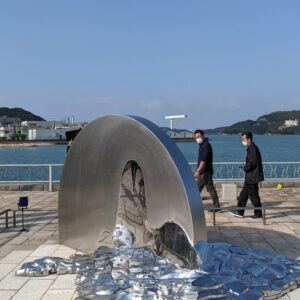 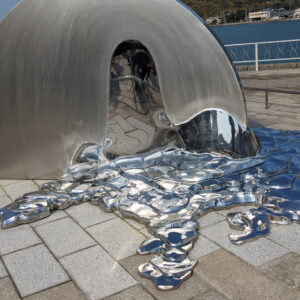 When we were done with Tonosho port (the students also introduced Gift of the Sun) we rode a bus to Nakayama. We didn’t walk around the 1000 rice fields (we did that three years earlier) but focused on Nakayama’s Kabuki Theater instead.

Long story short, during the Edo period, Shodoshima developed a (unique?) culture of rural kabuki theaters. Kabuki is usually a quite urban and bourgeois art, but the story says that as Shodoshima – due to its central location in this part of the Seto Inland Sea – was a big “trading post” back in the days, some people traveling back and forth to Osaka imported Kabuki to the island and a rural form of the art was popularized. During its heyday, there were up to 40 theaters on Shodoshima. Nowadays, only two remain, but they still keep the tradition alive and have performances a few times a year (they haven’t lately because of the pandemic – many traditional activities have stopped for the past two years – matsuri come to mind too). 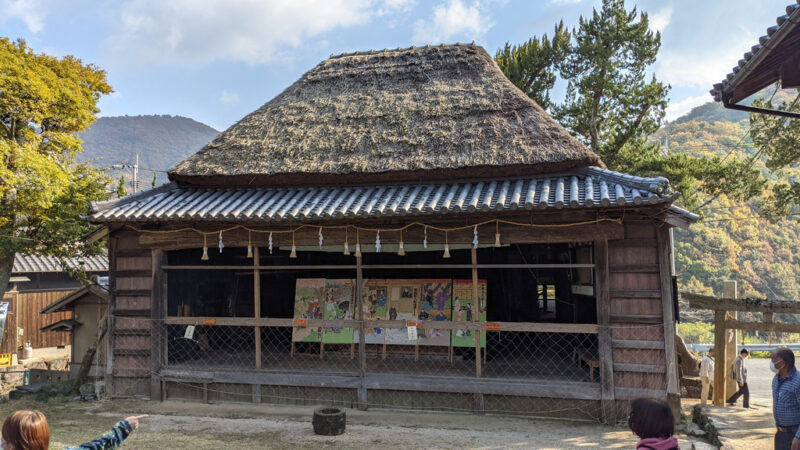 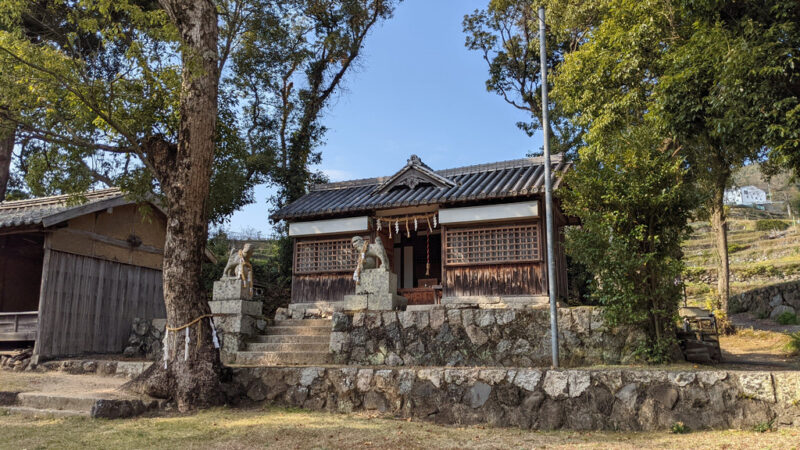 Kabuki is linked to the Shinto religion, so there is a shrine facing the stage.

One of the people in charge of the theater was there and… for the first time in my life, I could enter the 350 or so years old building. 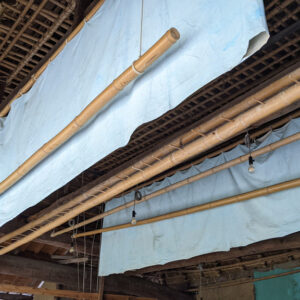 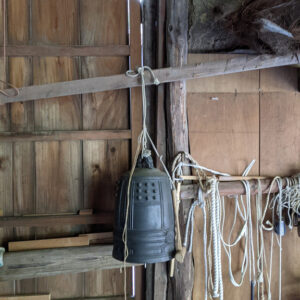 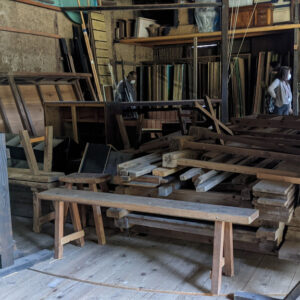 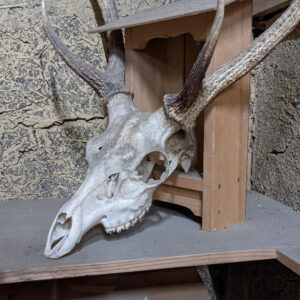 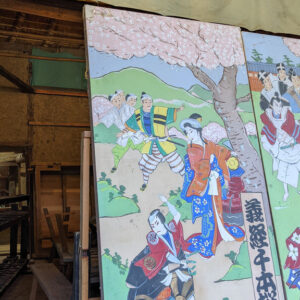 I suspect that it was a little messy because it hasn’t been used in two years (usually, performances in Nakayama are in October). I’m pretty happy I could enter the place nonetheless.

People following me on social media, you may have seen a quiz with a picture of some drapes hanging (see above). The answer is that they are curtains to be lowered and raised during the shows (to represent backgrounds or to hide the stage from the audience).

Our next stop was Olive Park that was full of tourists!

With all the talk about foreign tourists not being allowed in the country, we sometimes tend to forget that national tourism is still happening. Actually, Shodoshima may not even be that affected by the lack of foreign tourists as it’s mostly a tourist destination for Japanese people, most foreigners have never heard of it. 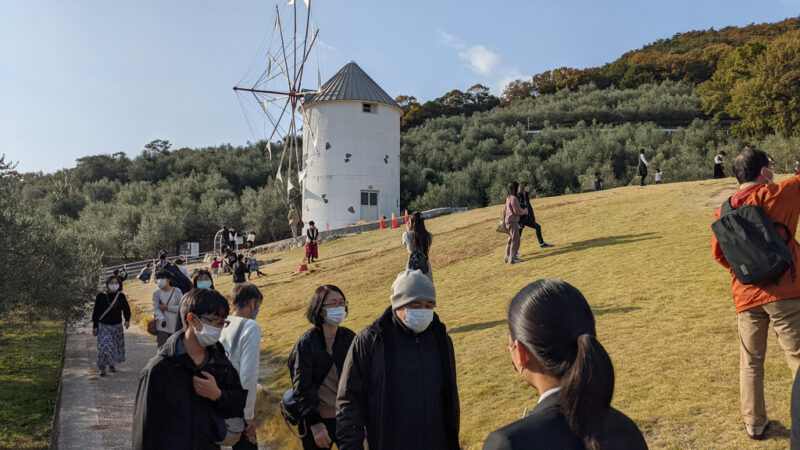 If Kankakei Gorge is the most famous destination on Shodoshima, the Olive Park and its Greek windmill are probably a close second. 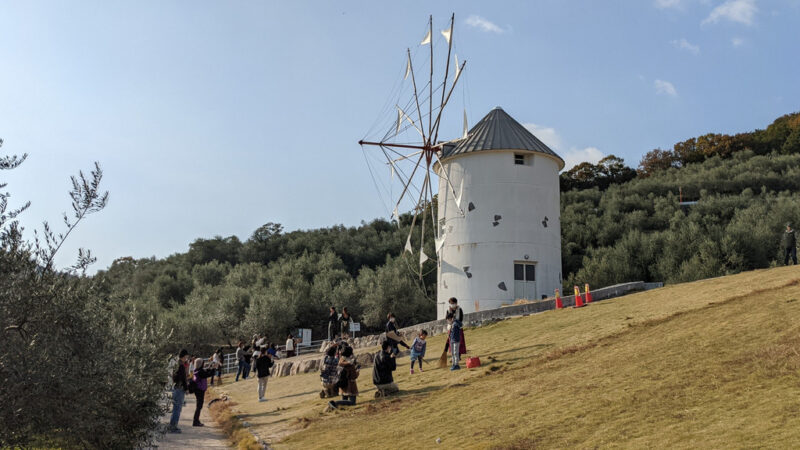 As a reminder, Shodoshima is the first (and only) place in Japan where olives can be grown. It is one of the island’s claims to fame, hence this park and this windmill. 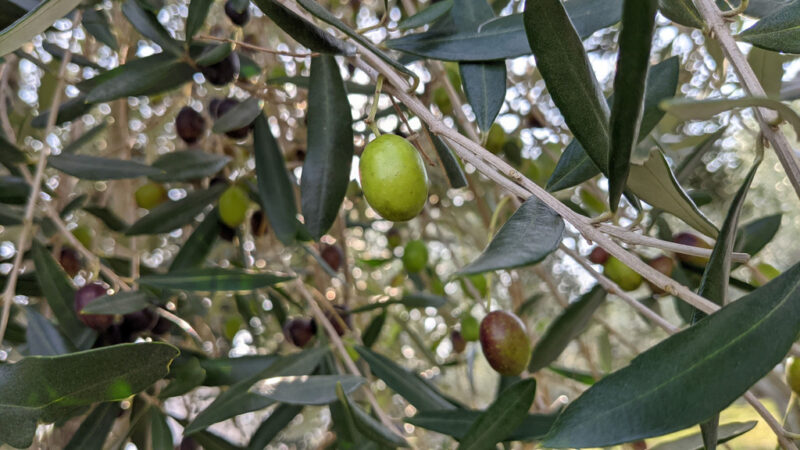 Our next step was Shodoshima’s high school (there used to be two, but they recently merged into one because the number of children is getting low 🙁 ) where we had a debriefing meeting and gave feedback to our guides.

After waving goodbye, we returned to Tonosho Port where everyone went their own ways. 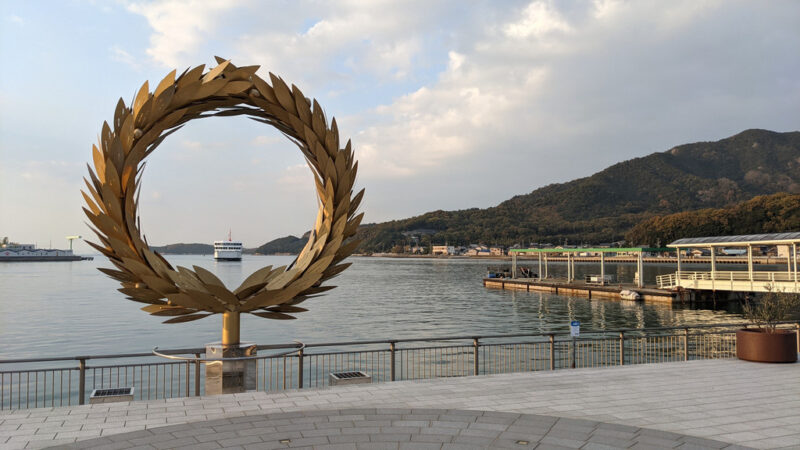 Gift of the Sun

Fun fact: When this sculpture was made in 2013, a certain number of children on the island got to write messages that got engraved in the leaves. One of our guides, now a high school student, was one of these children. I like when such things suddenly become less anonymous. 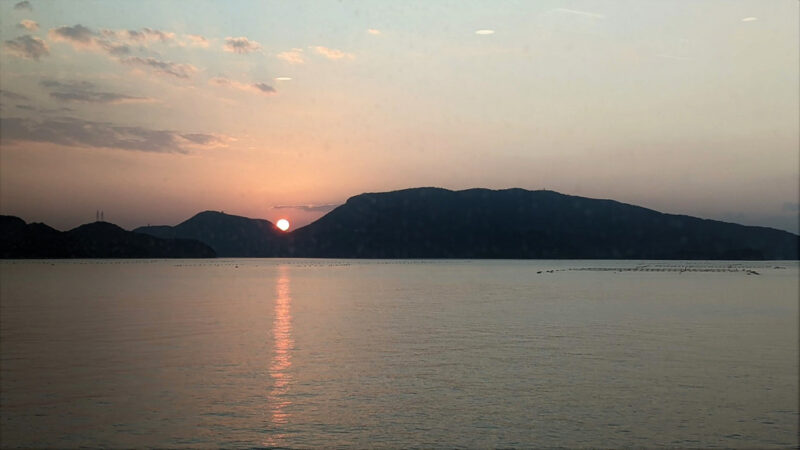 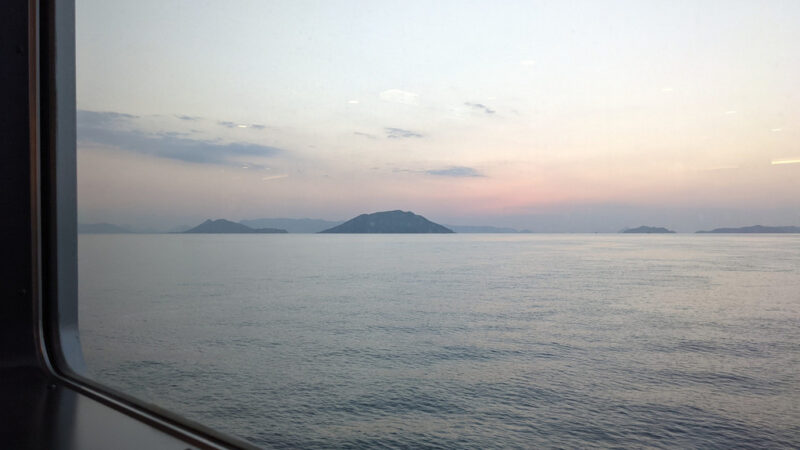 That’s all for today. Nothing too special, just a good day and a few pictures that I thought you may like.

Now, I hope I’ll get to go to Teshima before it gets cold, we’ll see if I make it there or not. In the meantime, stay tuned, lots of things are coming in the next few weeks (I hope I won’t be too busy and I’ll be able to publish regularly).