So, on Monday, despite a temperature of about 35°C (which means that it felt like pretty much 40°C) we went to spend the day on Teshima. The reason of that small trip will be revealed in a few days and posts. Meanwhile, here is a short tale of the day.

We arrived on the island late in the morning and we had to go to the village of Kō as soon as possible. One little problem was that busses are pretty rare to Kō and the next one was two hours later. As the village is only two or three kilometers away, it’s easy to walk there, even despite a slope. It may be a bit difficult for a 15 months old, but even though we don’t use it that much these days, we brought the stroller especially for that walk we knew was going to happen. An easy walk, sure, in normal weather conditions that is. With that heat, it was out of the question to improvise the thing. Hence the stroller, as well as a few bottles of water, towels and hats. During the whole time, we constantly checked on Hana to make sure she was OK, protected from the sun as much as possible, giving her water every 200 or 300 meters, taking a pause every time we could find some shade (that is no more than three or four times for the whole distance – that remains a big mystery for me, regardless whether we are in town or in the countryside, I have the feeling that there is much less shade in Japan than anywhere else I’ve been to). About 45 minutes later, we finally arrived near Kō where we saw all our efforts rewarded with this view: 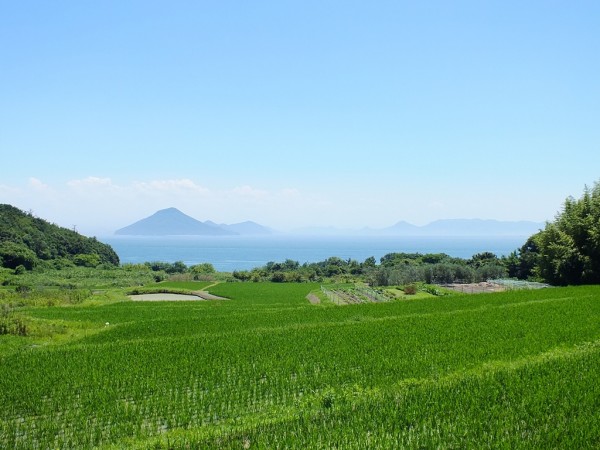 Despite the fact that I rarely go to Kō (it’s really remote from everything, one doesn’t go there for no specific reason, even when on Teshima), I think it’s one of the most beautiful spots in the Seto Inland Sea, and I don’t think you’ll contradict me looking at the previous picture (and I’m not saying that because the island on the left is Ogijima – for those who care, the island behind is Megijima and in the background, this is Shikoku).

Getting close to the village, we spotted something odd in the bamboo forest nearby: 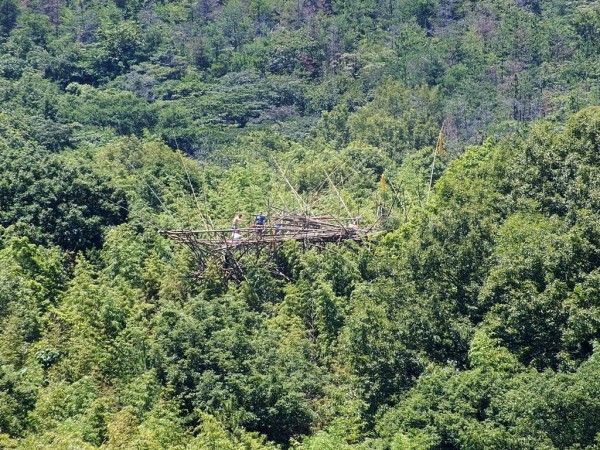 Yes, it is what it looks like; some people building something out of bamboos, 20 meters high in the bamboo forest’s canopy. Of course this has something to do with the Setouchi Triennale, and of course, I’ll give you more details soon.

Entering the village, we were welcomed by Chiharu Shiota’s Farther Memory (sometimes called Distant Memory) which will celebrate its three year anniversary (like most of the original art from the first Triennale) in 10 days (unfortunately, it may be dismantled at the end of this Triennale): 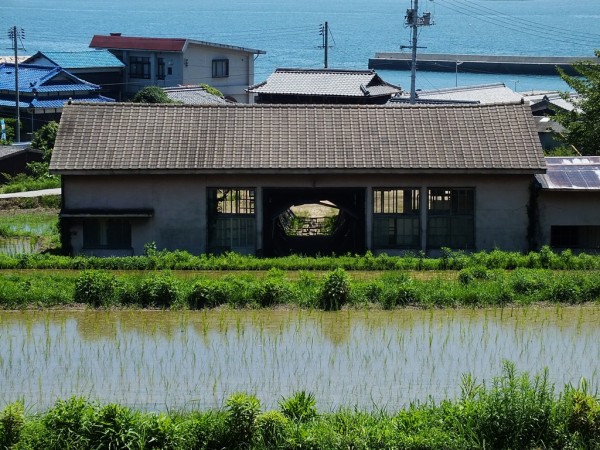 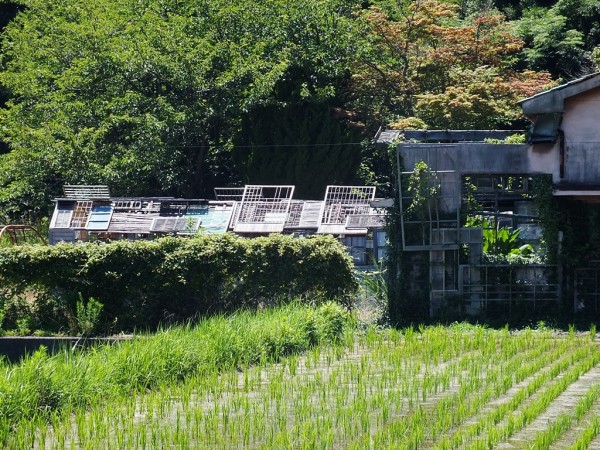 The installation is hard to recognize under those angles, but that was the point of those two pictures. That and the fact that we didn’t get closer from lack of time – as I previously mentioned – busses are rare in Kō and if we walked there, there was no way we would leave the village by foot.

We also made a small detour to see half of Traces Blue by Craig Walsh and Hiromi Tango, one of the new works from this year that we hadn’t had the chance the see yet: 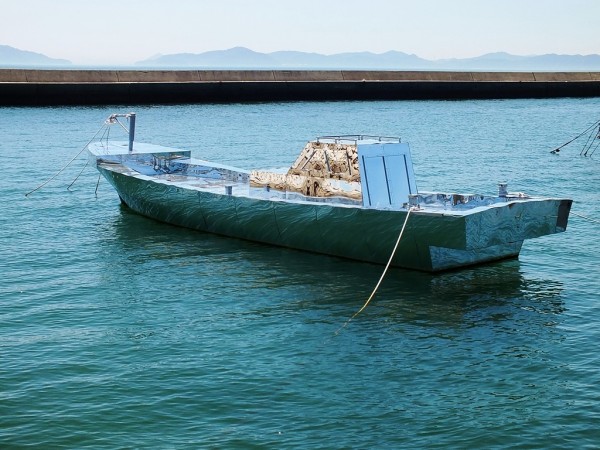 A few meters away, a strange surprise awaited us: 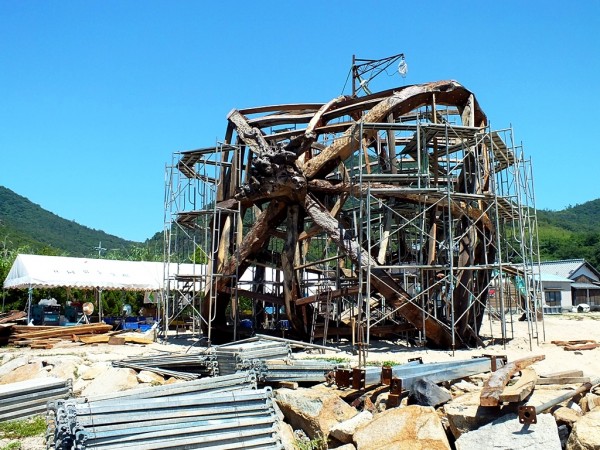 I’m calling this a strange surprise because I thought I knew about all of the new artworks on Teshima for this summer, and I had no idea what that was about.

After a small inquiry, it seems that it’s linked to Beyond the Border – the Ocean by Lin Shuen Long, except that the work is listed as an event (a theater play) not an installation. And even though the play will be performed on several islands, I don’t think that thing will be able to move quickly (if at all) from one place to the other. So many it is some sort of permanent set for the play? Not sure. I’ll give you more information as soon as I have any. 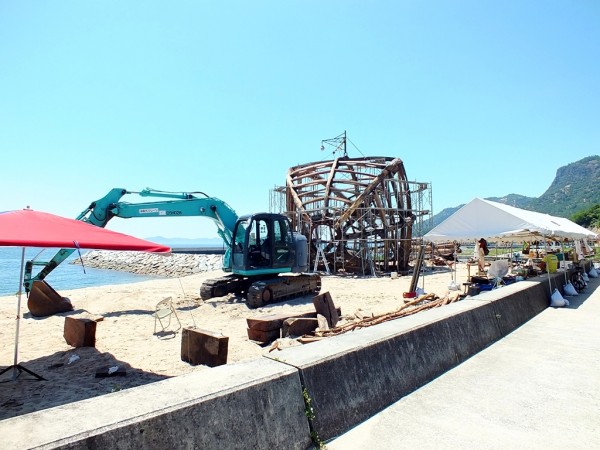 The bus was about to arrive, it was time to leave the beach and walk to the bus stop nearby. Except that things didn’t go as planned.

As we were about 200 meters away, we suddenly saw the bus not arriving but departing! More than 5 minutes early! How was that possible!? No time to think but to run after it, waving in hopes the driver sees us in his rearview mirror. He didn’t and left. The next bus was three hours later!

What were we going to do after that?

It was out of the question to wait there or anywhere else in the village for three hours. We didn’t really have anywhere to go in Kō and just visiting every corner for three hours could have been an option hadn’t it been so hot. Not under that sun. Our other option was to walk back to Ieura, but I was really not crazy about the idea. We were low on water (although I’m sure there were distributors somewhere in the village) and the heat was getting stronger. If I was not too worried about myself or 康代, walking that road again could be dangerous for Hana.

Our savior came in the guise of an old man with a yellow T-shirt riding a scooter. He passed by, looking at us. A few seconds later, he came back and asked us why we were there (at a bus stop where no bus would come for hours). We told him about our predicament. He told us to stay put and left.

I think I already told you how the people on Teshima are among the nicest people I have ever met (I don’t mean in Japan, but on Earth). Yes, I have, there and there too, even though I haven’t even told you everything.

He came back three minutes later, not riding his scooter but driving his car. He asked us where we wanted to go next?

A few minutes later after many warm thank yous, still moved by his gesture, we sat in Shima Kitchen and ordered lunch: 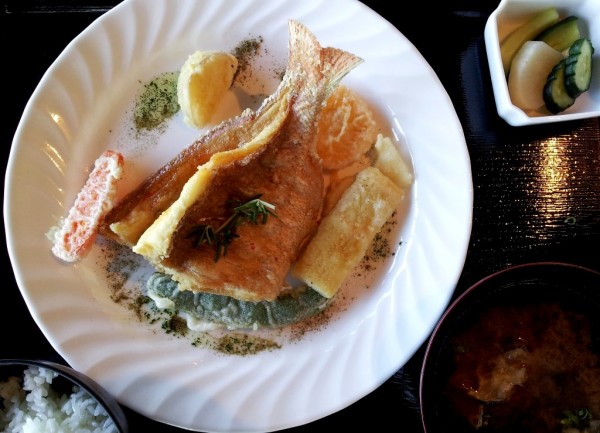 Strangely, the only picture I took was that one (which reminds me that I have a few dozens from previous visits that I haven’t posted yet). This is the Shima Kitchen Set, the main meal that you can order at Shima Kitchen (but not the only one). A meal that is always the same and yet always different. Everything that will be on your plate (and in your bowls) will come from the island, so it will constantly change depending on the season, on the catch of the day (sea bream on Monday) and on whatever is available in the nearby gardens that day. Needless to say, it’s always delicious.

There we exchanged a few words with a Swedish guy living in Switzerland and his friend who are spending three weeks in Japan, including one week on Shikoku. I’m proud of them.

Actually I was surprised by the number of foreigners on this island on Monday. Not a large number, but the largest proportion I have seen on the island. Is Teshima starting to be known abroad? (probably as Naoshima’s neighbor) 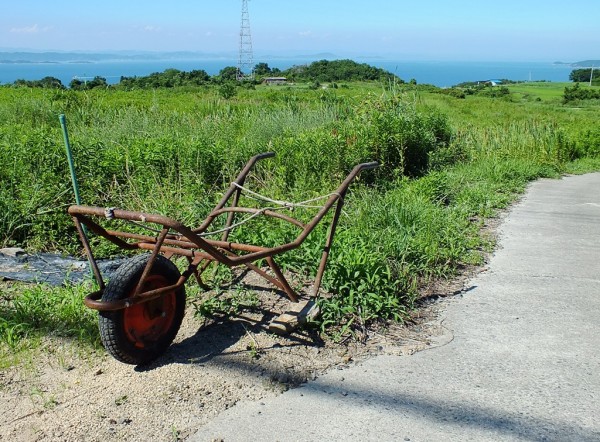 After a short walk in Karato and a nice chat with three old ladies we met along the way, it was time to go back to Ieura, as it really was too hot to do much more. 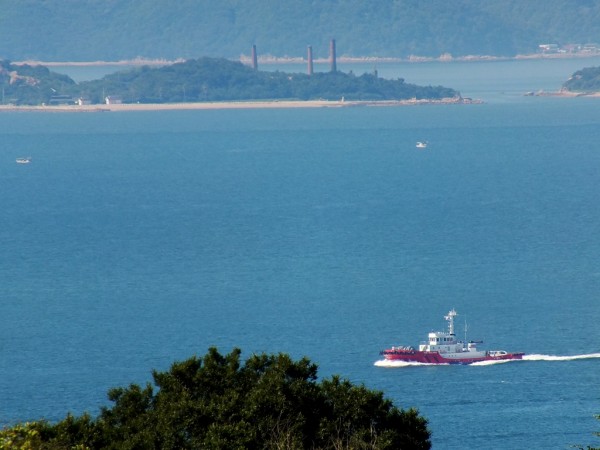 As we had plenty of time left before it was time to take the boat back to Takamatsu, we had a small walk in Ieura, which allows me to give you a very small preview of Teshima Yokoo House that will open its doors in 10 days : 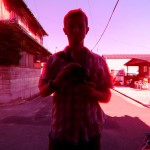 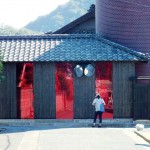 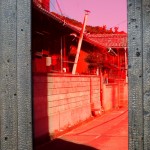 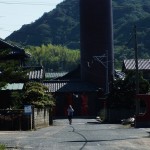 And as often when we are on Teshima, we spent the last hour or so in Il Vento (aka Was du liebst, bringt dich auch zum weinen) having a drink and a snack waiting for our boat. And as often off-season, we had the place almost all for ourselves: 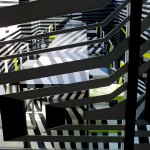 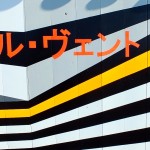 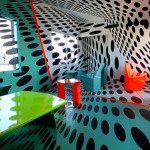 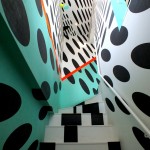 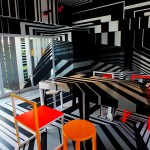 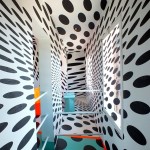 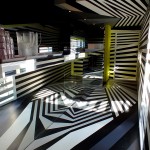 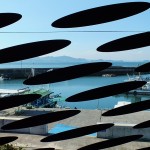 Soon (but for once not “too soon” as it was too hot, and we wanted to be back home as soon as possible) it was time to board the boat that brought us back to Takamatsu where we could finally get some cool air…

As for every trip to Teshima, it was a wonderful day. This island really is one of my favorite spots in Japan, and I more than warmly advise you to visit it one of these days.

10 thoughts on “July Afternoon on Teshima”