It’s October, rice is getting harvested, the weather is cooler and… the fall matsuri are coming!

I don’t know in other less rural parts of Japan, but here on Shikoku, the fall matsuri are kinda of a big deal. Sometimes called harvest matsuri, they’re pretty much everywhere, they’re usually the most important matsuri of the year and in some villages they’re the only matsuri of the year.

So if you’re on or near Shikoku in October, especially mid-October, you know what to not miss.

Fall matsuri come in every size, from the gigantic matsuri in Ehime; the Niihama and Saijō matsuri each involve the entire city and get visitors in the tens of thousands each year, to the tiny neighborhood matsuri that can be found here and there.

In Kagawa, in particular, the matsuri not to be missed are the Shōdoshima fall matsuri. From October 11 to October 21, eight matsuri are being held in various towns and neighborhoods of  Shōdoshima and Teshima (which is administratively speaking a part of Shōdoshima).

I’ve already attended two of them, the Karato matsuri twice (probably one of the smallest matsuri I’ve attended and yet probably my favorite) and the Uchinomi matsuri last year (I have to tell you about it before October 15), but they’re all worth it and if you’re in the area (Shikoku, Okayama, Kansai) and are looking for ideas for a great day trip in October, there you have it (in addition of the Setouchi Triennale of course). 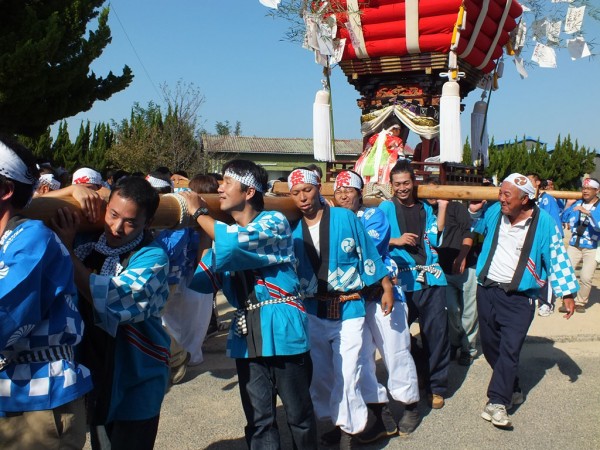 Karato matsuri: carrying the taikodai is not an easy task. I had the chance to do it back in 2010. I may do it again this year who knows?