Beyond the Border(s) – the Ocean is going… beyond the border…

The retirement of the old Meon and the arrival of its replacement are not the only things that are happening at Takamatsu Sunport at the moment.

I knew it was coming, I was secretly hoping it wouldn’t (knowing it was totally unrealistic, but… you know… a man can hope…), but it is actually happening!

Beyond the Border(s) – the Ocean is being dismantled! 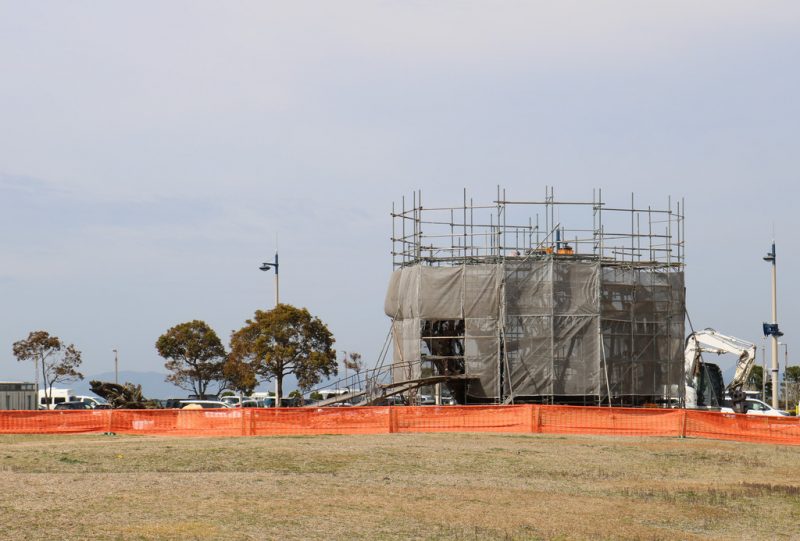 As you may or may not know, some major construction work has started in Sunport a little while ago. Actually, it has been delayed because of Covid-19. This allowed Lin Shuen-long‘s artwork to stay a little bit longer, but it couldn’t stay forever. A large sports center is being built. So, it means that all the things in this part of Sunport must go. One road has already been removed as well as the skate park. And it is now Beyond the Border(s) – the Ocean‘s turn. 🙁 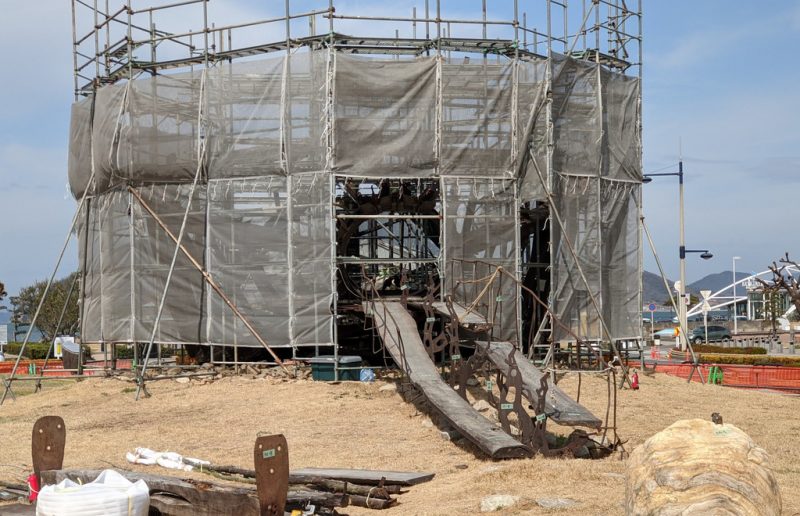 And if this wasn’t sad enough, I noticed something even sadder. Look at the picture above closely – in the entrance of the structure. Do you see the two ravens?

Here is a closer look: 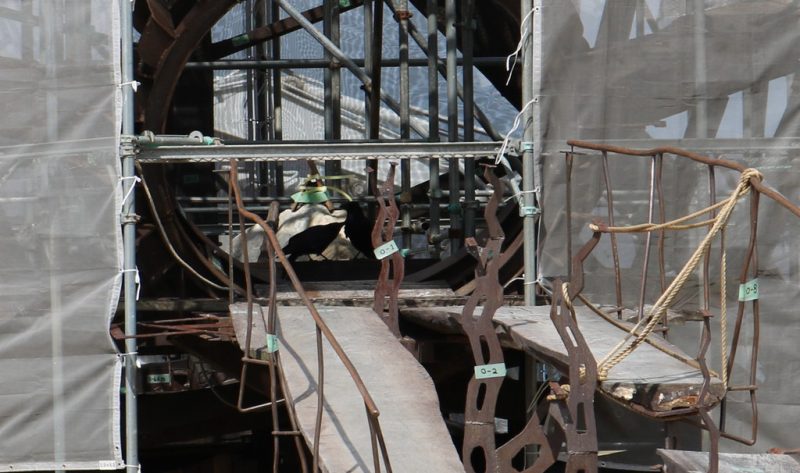 Why are they standing there you may be wondering?

I think I know the answer. Several times in the past, walking around the artwork, I noticed ravens on or near the top. I can’t find pictures here on the blog, but I may have posted some on social media a few months ago.  I’m pretty much sure that they had built a nest in a safe place (being the statue of the little boy?). And I’m pretty much sure that they’re now homeless. I just hope that there was no egg or hatchling involved.

However, I’m afraid that there may have been; ravens usually lay their eggs around this time of the year. Also, they really looked like they were comforting each other. I don’t want to anthropomorphize them, but you may know that these birds are among the most intelligent animals in the world. Ravens are capable of feelings not too dissimilar to the ones we experience. They become couples for life once they pair. They also tend to nest in the same place for life. So, I’m afraid that this is what actually happened there. 🙁 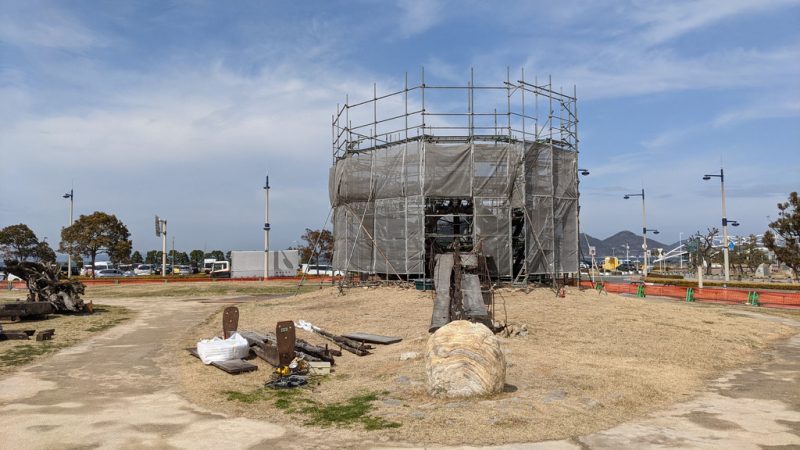 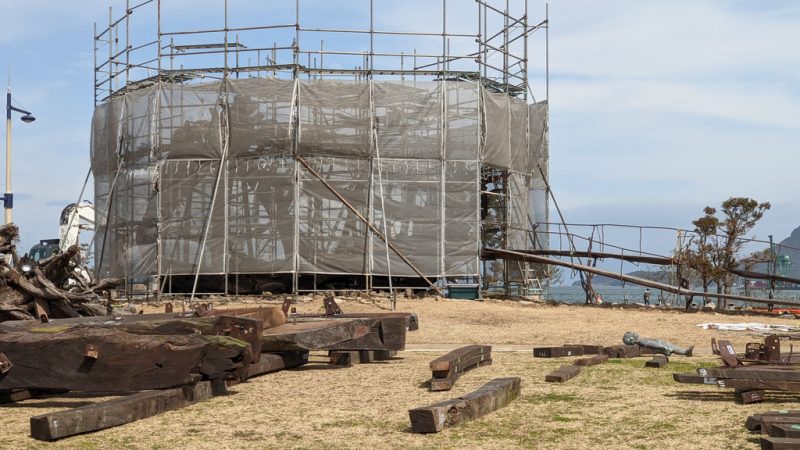 Talking about the statue of the little boy, here it is. 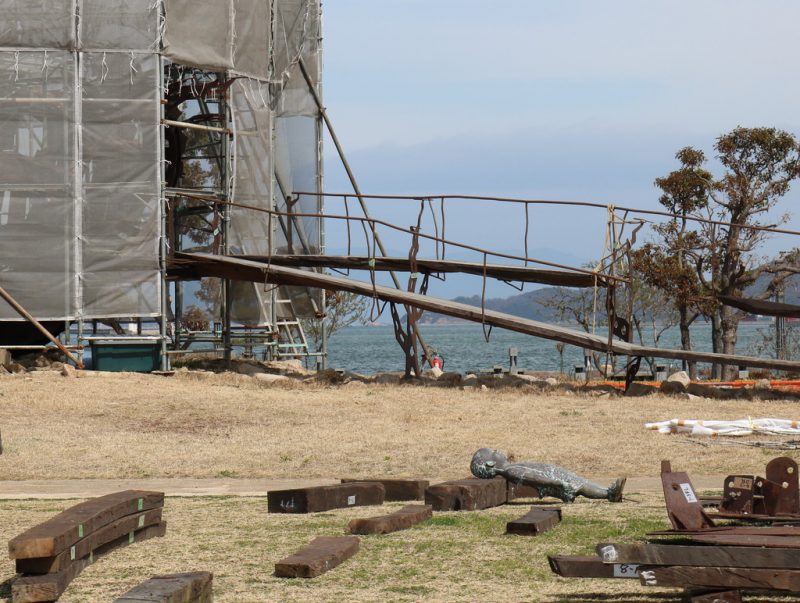 It was molded from Lin Shuen-Long‘s own son, five years ago. It was originally used for the wonderful artwork Beyond the Border – Tide on Shodoshima in 2016 but has found its way in his other artworks for the Setouchi Triennale, both this one as well as 2019’s Beyond the Border – Wave.

Oh, and if I sound sadder for the ravens than for the dismantling of the artwork, it’s also because I more than suspect that it’ll return sooner or later (2022?) to another location. I do not have any inside information about it, but the artist hinted at it when the announcement of the future dismantling was made: “the drifting seed will drift again soon.”

And this picture seems to be confirming it. Every piece was carefully numbered and set on the floor in an organized fashion. When some other artworks are dismantled for good, it’s often much more unceremonial: 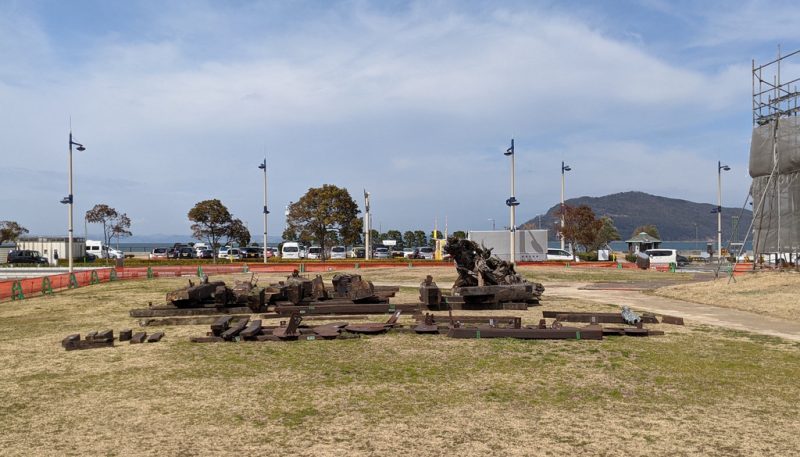 So, let’s be sad now, but let’s be hopeful that we’ll see Beyond the Border(s) – the Ocean again sooner than later.

And I’ll end with the last post I made about the artwork when it was still standing:

Beyond the Border(s) – the Ocean

If you liked what you read, may I suggest you click on the logo?