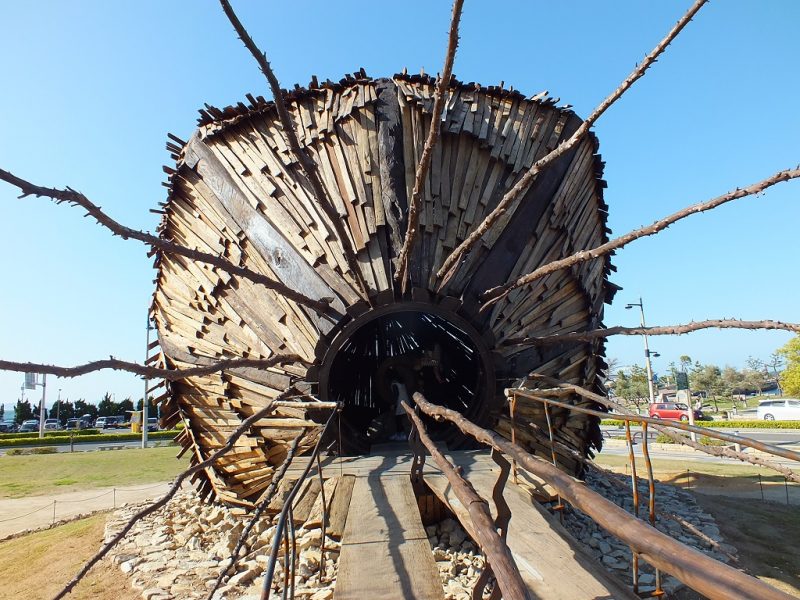 Lin Shuen Long‘s Beyond the Border – the Ocean is still standing in Takamatsu Sunport.

You can’t enter it at the moment (only during the Setouchi Triennale) but you can walk around it and admire it as much as you want.

It should still be around next year, but after that, I’m not sure how long it will last, as the entire area will be completely changed for better or worse. Most if not all the green spaces in Sunport will disappear (because Japanese local governments all over the country hate green spaces – why have a green space when you can have concrete poured over it instead?), but maybe, it’ll be bearable as the architects in charge of the huge project are pretty well known around here. I’m talking about SANAA of Inujima (for Kazuyo Sejima), Teshima (for Ryue Nishizawa) and Naoshima (for both) fame. But more on that another day.

So, yes, one day Beyond the Border – the Ocean will be gone from Takamatsu Sunport. Who knows? Maybe it won’t be gone forever, maybe it will travel to another place, after all it was on Teshima before “drifting” to Takamatsu (it didn’t actually drift, but the verb is fitting with the concept of the artwork). In the meantime, it’s there.

Also, next year, Lin Shuen Long will be back to Obe beach on Shodoshima with a new project that – if I understood correctly – is some sort of sequel of his installation from 2016, one of the most beautiful of the Setouchi Triennale 2016, Beyond the Border – Tide.