Sunday was Sports Day on Ogijima!

If you know a little bit about Japan (and I assume you do if you’re reading this), you may already know a little bit about Sports Day (also known as Undokai). You may already know that it’s an important day for most children in Japan. It takes place either in the Spring (usually in May) or in the Fall (usually in October), depending on the schools. It basically consists in a day when children go against their classmates in a series of sports challenges.

I must admit that I never paid too much attention to it before; partly because my daughter just started kindergarten this year (and her undokai hasn’t happened yet, it will be in October), partly because putting “sports” and “school” in the same sentence brings back some very unpleasant memories from my teenage years (not only I sucked at sports, but sports education in France is quite pathetic).

Sports Day on Ogijima is a bit unusual though.

I could have some facts wrong, but here is what I know:

Until 2009, Sports Day on Ogijima was pretty much like any other Sports Day in Japan, or at least in rural areas of Japan – and when the school closed, undokai vanished…

Except that it didn’t!

When the date of the next undokai grew closer, the people on the island were very sad. Undokai had always been cherished by everyone on the island. Everyone remembered their younger years doing, and then their children doing it, and sometimes even their grandchildren. It was one of those events where most if not all of the population of the island would gather in a joyous day. That time, its absence was a dark reminder that the island was simply dying.

So a few people (I’m tempted to say under the initiative of Yoshifumi Oshima of Onba Factory fame, I could be wrong, but at the time he was the main engine of the island’s revitalization, he still somewhat is) decided to organize undokai no matter what, and as there were no children to take part in it, it’d be an undokai organized for old people!

It was a big success and became one of the main and most fun events of the year for the elderlies of the island.

Last year, things changed a little again as the school reopened and the “real” undokai was held again. As a result both merged (actually, there are even two undokai on Ogijima, one in the Spring and one in the Fall.

For an unknown reason (my phobia of sports at school?) I had never attended the event before. Now I have. And more than attended, I even took part, as a member of the Ogi de Asobitai team (I really only took part in one challenge, but my team won it! Yeah!).

Here is a short summary of the event:

The very beginning was a bit odd for me, it was a very official ceremony with speeches from the principal and a few more people, a small parade, the Japanese national anthem, and a few obachans in the back who couldn’t care less and were talking so loud that they were almost covering the sound of the people making their speeches.

First, the children took part in a series of challenges where they faced each other or adults (who obviously had a handicap to keep things even).

Then, various teams took parts in a series of events and challenges that were more or less athletic, but always fun and friendly. For some of them, one needed to have signed up beforehand, some others were open to anyone and everyone.

Here are a few pictures and a video. Of course (luckily or sadly?) you won’t see me taking part in any of the challenges as I couldn’t take pictures when I was on the court, especially for the challenge I took part in which kinda reminded me of a challenge from the TV show Survivor (but much easier). Finally, the day ended with the Ogijima Obon dance, performed by everyone, the elders in the center and everyone else around. If the moves are simple, their sequence wasn’t, and I even wonder if any of them were repeated at all. No need to say that only the elders performed it properly. I hope I can show it to you one day (and I really hope I can be on Ogijima for Obon one day). 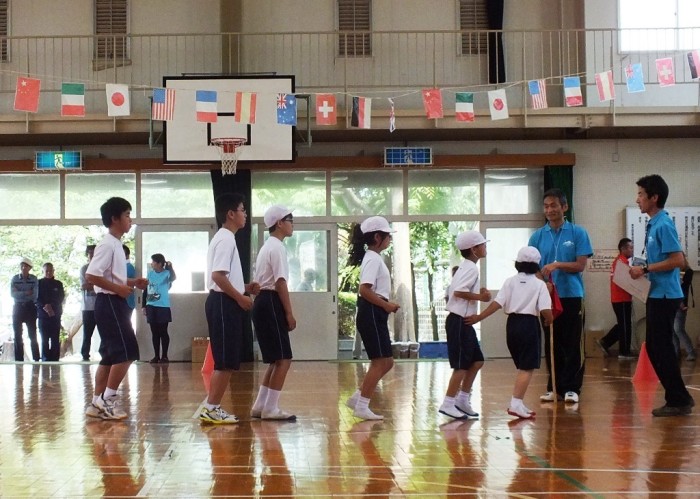 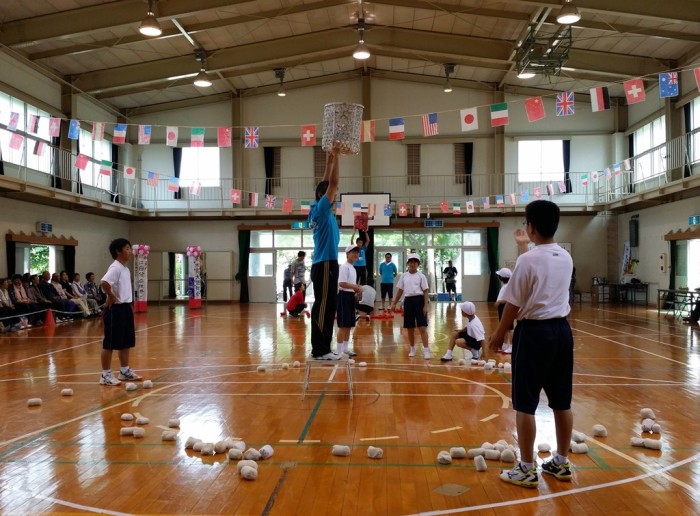 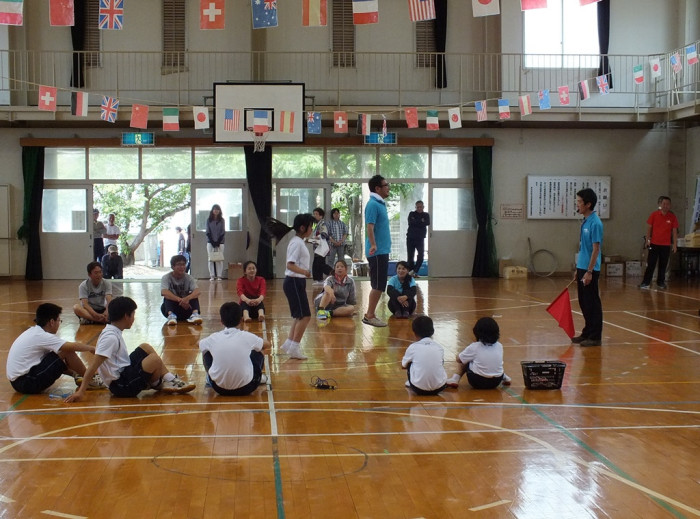 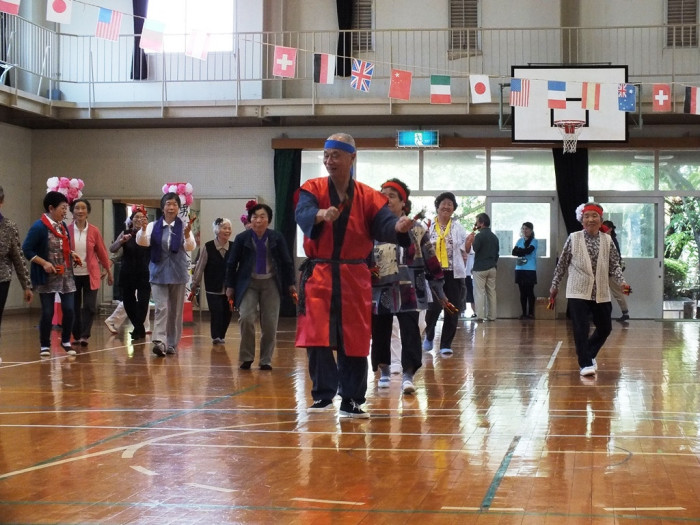 The elders demonstrated a few movements making me think of some sort of tai-chi (disclaimer: I barely know what tai-chi is). Note that the “leader” is the man in charge of Ogijima’s dojo. I don’t personally know him, but I always like how he looks like he’s always happy and relaxed (the fact that he always seems to wear the same dark blue casual kimono may play a part). 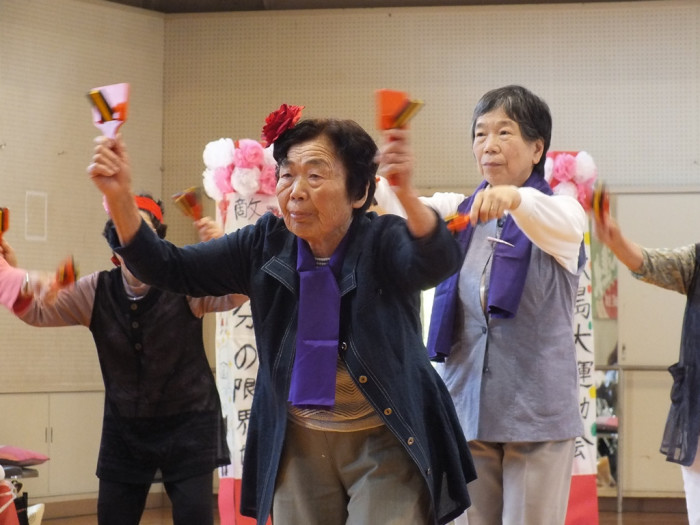 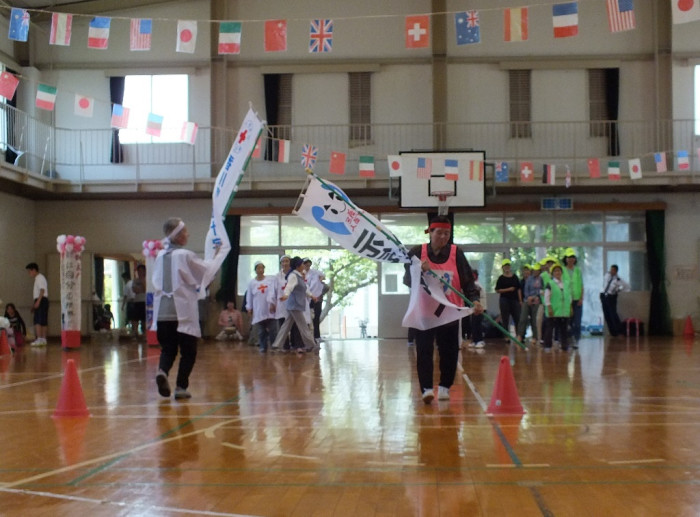 A very silly but very fun and funny challenge: a race where contestants have to grab a suspended peanut without using their hands.

Another very silly but very funny challenge consisted in another relay race where people first had to turn around a baseball bat 10 times so that they’re completely disoriented for the rest of the race where they need to rush to a basin, grab a sea eel and put it in a plastic bottle (yes, I know, animal lovers won’t like that… but think about the eel feast that the locals had after that). 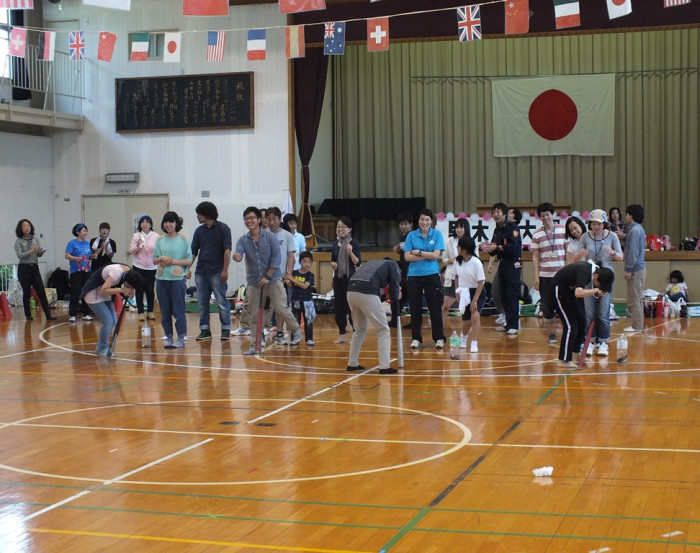 When a fire fighter (aka Masato Ono) and a policeman are hoop rolling. Yes, that too is Sports Day on Ogijima! 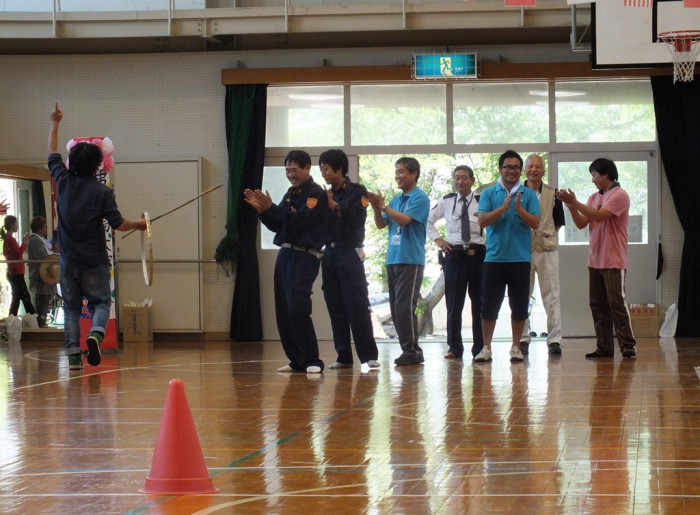 So, now you know what Undokai on Ogijima looks like. Yes, it’s low budget, a bit silly at times, not fancy at all, but honestly, I didn’t see a single person not having fun non-stop from start to finish. I can’t wait for the next one!

previousSushi Restaurant in Kawaramachi
nextStreet of Takamatsu in the Afternoon