We were on May 25th, 2009 and it was our last full day in Takamatsu, except that we didn’t spend it in Takamatsu, as we took the ferry in the morning to Shōdoshima (小豆島).

There are a lot of interesting things on Shōdoshima, however, as it’s a much larger island than Megijima or Ogijima, neither walking nor riding a bike are an option to visit it in one day time. And as that day, 康代 couldn’t borrow the family car, we had to visit the island on a guided tour by bus. Not really my thing, but we didn’t have much of a choice. If we wanted to get an overview of the island it was the only option; although afterwards, seeing how few cars we saw during the whole day, I could have rented one and drive with much problem, even on the left side of the road (I’ll need to learn how to do that one day though). Something to think about for a future visit.

In the end, I don’t regret at all going to the places where we went; what I regret is not going to the places I wanted to stop to and couldn’t because of the guided tour thing (gosh, I hate those). I could mention the Shōyu factories (if I understand correctly, the island is one of the largest producers in Japan), a bunch of temples (I never get tired of Japanese temples) and a few other things (including Greek windmills!)

The other element playing against the guided bus tour was the guide herself. I’m sure she’s a nice woman, and in the beginning, I didn’t think she was going to be much of a problem. I assumed that she would give her explanations now and then, and we could forget about her the rest of the time.
Well, that didn’t exactly go as expected. Forgetting about her turned out to simply be impossible. Apparently, being a guide in a tour bus in Japan means speaking constantly, all the time, with no interruption for the whole duration of the tour!
I mean, I don’t know how it’s like in your respective countries, but personally on all of the (few) guided tours I’ve been to my life (all of them in Europe before that one), the guide gives some general background information on the bus for a few minutes, then shuts up until we get to destination where they’ll explain whatever it is they have to explain.
Not her.
As soon as everyone was on the bus, she would speak and speak and speak until we reach destination, and there she would leave us alone until we get on the bus again, where she would speak and speak and speak.

Oh and don’t think I could try to simply ignore her. The bus was relatively small, she had a microphone, and all of the sound space was filled by her voice. We couldn’t even really speak to each other, we’d have to be louder than her for that. Yes, it was that bad.
At some point, I almost ditched the bus and walked to the port, except that 康代 was not up for it (these Japanese people, never wanting to make a scene) and in all honesty, I didn’t choose the right moment for it, as it was quite impossible to walk anywhere from there.

So, the whole ride was basically a torture and sounded more or less like this: “ヴィ日ヴィ部 olive おりぃ塩具え王ふぉう絵り olive ぇにりぃヴぇりぃとイオ olive るうちぃりぃ利ぴゃぇくぁふ olive ぉヌぅう棒とつとぢぃ” (yes, I know it doesn’t make any sense, this is exactly how to sounded to me)
And why “olive” in the middle? Well, apparently olive in Japanese is pronounced “olive” and if she mentioned the word so often, it’s because, apparently, Shōdoshima is the only place in Japan where they managed to grow olives (with olive trees coming from Greece, hence the windmills, earlier).

Our first stop was at a small village that turned out to not be a real village with the set where the film 24 Eyes (二十四の瞳 – Nijū-shi no Hitomi) was shot. Apparently the film is very famous is Japan, I’ve seen last year and I warmly advise you to watch it, it is very interesting indeed (maybe I’ll write a post about it one day, who knows?). The thing about the shooting of the movie is that the set was not made of cardboard and planks; they built a bunch of actual buildings to recreate the village where the action takes place. So nowadays, more than 50 years later, those buildings and houses are still standing and they’re one of the main tourist attractions on the island. Even if it is not a real village, it is amazing nonetheless and visiting it helped me getting a feeling of what a small Japanese village during the early Shōwa Period was like.

In the “village”, there was a tiny canal of salt water (no more than two meters wide) in which there were a bunch of local fish, including a quite peculiar one:

From what I understood it’s a sea bream, however I’m pretty sure this behavior is not a natural one. I assume it comes from the habit of being fed by the many tourists, in a similar way that Koi do (or the fish in my dad’s pond for that matter). Yet, this whole sticking its head out of the water is quite both puzzling and fascinating.

Our next stop was simply the worst experience I had during that first trip to Japan (and I don’t think it has been topped since in the following trips), even if it has nothing to do with being in Japan. I have mentioned in in a previous post, the one about Naruto whirlpools that I have a pretty strong fear of heights, and as a consequence, I’m always afraid of ropeways. Er… Don’t get me wrong, I won’t get terrified if a ropeway car suddenly shows up in front of me. It’s being suspended in the air inside one that terrifies me. I’m lucky enough to not have to do that very often, but every time I have to, I’m seized by the knowledge that the cable is going to break and that the car is going to fall down to the ground where a violent death awaits us. No need to explain me that chances that it actually happens are slim to none, I’m fully aware of that, however, it’s called an irrational fear for a reason.

Now, you know what’s coming next. A ropeway, of course. And not any ropeway, but the Kankakei Ropeway.

康代 had warned me, and I was trying to prepare myself for the ordeal. She had told me that the view of the Kankakei Gorge was really worth it. The part that I had misunderstood was that the ropeway wasn’t leading us to a place where the view is amazing. This ropeway doesn’t lead anywhere in particular (actually it does lead to the middle of nowhere). The thing is that the ropeway goes above the Kankakei Gorge and it’s the view from the ropeway that is amazing and not to be missed!
I understood the whole thing too late, after climbing on the machine that had already started its fall (some people call it descent) down the Gorge. So, well, the view was partly my shoes, and partly completely dark, that’s when I closed my eyes.
No, I’m not proud of myself, but really, one shouldn’t ask me to do insanely unreasonable things like that.
So, apparently, the Kankakei Gorge is amazing. Personally, while I’ve been there, I don’t know and I can’t vouch for people saying such things.

I must admit that at this point of the day, between the guide who was driving me nuts with her never-ending soliloquy (She even recited some excerpt of a book and sang a song at some point! I mean… Come on…) and this attempted murder by a ropeway against me, I was not in the best of moods (this is when I seriously thought about walking back to the port). At that point, the only thing I wanted was to get the hell out of this crazy island as soon as possible.

There weren’t many things that could put me in a better mood at that point.

And monkeys there were!

As you know, Japan is one of the only (maybe the only) countries with a temperate climate to have wild monkeys, and Shōdoshima houses its share of them.

We first saw a few by the side of the road, near the Kankakei Gorge, but we also went to some sort of monkey sanctuary, where monkeys gather by the hundreds (some people take care of the area and feed them, this explains that)
Monkeys really were everywhere, going on about their day without paying much attention to us, doing rarely more than vaguely looking at us when they deigned acknowledging our presence.

I need to thank them, as they avoided that trip to Shōdoshima and last day in Kagawa (for that first trip) to be a near total fiasco, which would have been a shame.

And don’t get me wrong, if you’re not a long time reader of the blog, know that I’ve been back to Shōdoshima since and that I love the place, and that I do advise you to visit it if you get the chance. 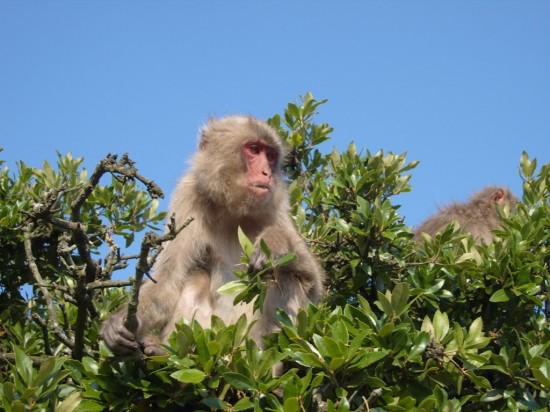 
From the monkey sanctuary, I took those few pictures unaware that I was shooting Hitoyama valley that I would visit one and half year later.

After the monkeys, we returned to Tonoshō where the ferry to Takamatsu waited for us.

On the way back, I could wave goodbye to Megijima and Ogijima.

The last night in Takamatsu was basically spent packing.

So, this is the end of the tale of my first trip to Japan. I hope you enjoyed it. I hope you’ll forgive me for skipping a few less important things in order to finish as soon as possible, after all I still have many many things to tell you about.
I’m not totally finished with last October’s trip, I have yet to tell you about my 4th trip last June, and if you know how to count, you realize that there’s also a second trip missing. That trip, which took place in May and June 2010 was my longest in Japan so far, we left Kagawa several times, and I hope I’ll get to tell you all about it little by little (I won’t follow any chronology, it will be as it comes, I’ll give timeframes if they matter)